On the basis of these results, after six years at school, what chances has he in the academic world? He is already on the alien rocky moon surface, not just a non-level playing field. For that matter can he qualify to compete in a feather-weight championship, if boxing is the game? These were the questions running through my mind ten years ago. Sadly, the same questions still run through my mind today despite several claims made that ours is a state having spectacular UPSR results for years and years. UPSR results such as shown above, and even worse, are still prevalent today.

The boy in question is generally known as Lan. Being somewhat lanky, taller than many of his peers, he is sometimes called ‘Pak Lan’. Now, two months after the UPSR exam results were known, a relative of his approached Pak Cik for his admission into form 1 class at Almanar. Almanar is never fussy over UPSR results. One with 3B and 2C is good enough to be admitted, but Lan’s performance cast great doubt over his ability to keep up with the rest. I expressed my reservation so. Just as I was marshalling more arguments to justify my turning down his request, he dropped the bomb-shell.

“Dia anak yatim (He is an orphan),” was a simple statement, an assault against which Pak Cik can never have a defence. Almanar, as a rule, has to bend backwards for an orphan, full stop.

It was a sad story. Lan’s father, a general worker, was killed when a lorry crashed into his motorcycle three years earlier. His mother refused to entertain the idea of allowing her son to have a stepfather, how hard her life might be to raise her loved ones. Perhaps, Lan’s performance in UPSR exam was a reflection of the hard life that followed.

Thus, Lan became a new form 1 pupil at Almanar. His withdrawn nature gave Pak Cik a cause to worry. But he followed every lesson diligently, getting from Pak Cik a bit more attention than the rest of the class in English and Mathematics. Over the weeks and months Lan grew in confidence, absorbing practically everything being dished out to him. His performance graph was climbing steadily. By the end of form 3 he must have committed into memory not less than 2500 new English words, as expected of Almanar’s pupils.

So Lan had done it his way.

Last week, after a long silence, Lan surfaced from nowhere at Pak Cik’s house, Nuri. He was a picture of confidence, wearing a thin layer of dark beard under his chin, a token of maturity, perhaps. His appearance was a reunion of some sort for the two of us. We had a lot to talk about of the years he was at Almanar. 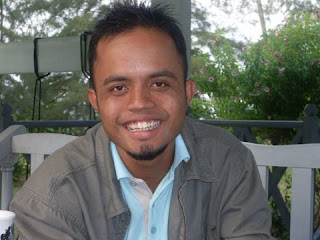 “All has gone well, Pak Cik, and in November, God willing, I will get my diploma in Mechanical Engineering. What do you suggest I do then, Pak Cik?”

Yes, it is just a Diploma, nothing glamorous, a far cry from a degree in medicine, accountancy and so on. But he was a poor candidate to begin with, hardly qualified as a feather-weight competitor – yet a champion in his own right he will soon be. I am happy for him and his loving mother.

“Get a job first and look after your mother. She has waited long enough. Later on, with some practical experience, you can think of going further to be a full fledged engineer.”

“Thank you, Pak Cik. I think I will do that,” he responded. His grin began to fade as he picked up his hankerchief to dab his watery eyes. Was it the tender thought of his mother ? Blessed is a son who thinks so.

Having regained his composure he whispered,“By the way, Pak Cik, I top my class in English!” That was meant to be a reward for Pak Cik.

Salam Pak Chik,
I think for a student who had started with Cs and Ds,Lan had done very well.After all engineering is not an easy field.I ve seen students from boarding school flung engineering course before.
Good day!

Welcome to my world Madam Gold.You are more experienced to judge and comment. Thank you.

'give me a boy,I will give you a man'
It true,'Your,I CAN is more important than your I.Q'

Bergenang air mata saya baca this posting of yours. You took an orphan boy in without reservations and turned him into a man (and I simply love the 'English' part!). Syabas Lan!

Not everybody can put together in a few words of wisdom what beeds a discourse. Than you.

Kama
Don’t we all wish that a ‘pengetua’ or ‘guru besar’ of a school cares to do a bit more for an orphan? You have a tender heart, Hajjah.

Azman said:
Tears well up in my eyes reading this ……. Congrats to Lan & babah

Me? During my schooldays, I have nobody.

Cikgu
I have highlighted one of many you must have come across and helped in your whole career.You and I probably were somewhat more fortunate that we never had to be in such a situation. Hence, for being lucky, we have done what we can . Young teachers need your guidance and experience. For them it must not be just career development and promotion, cikgu.Thank you for coming around.

Salam from Padang, Sumatera. Yes, Lan did it his way....WITH YOU THERE HOLDING HIS HANDS

How I wish I could do what you are doing. Expect to see the pictures taken on this trip.Safe journey home.

Amir
Pay me a visit next time you are home on holidays. Terus belajar hingga berjaya.

Salam, Pakcik...
Like others, I could not hold my tears while reading this...
Eventhough many of us already have achieved our dreams, we will never put you and your advises/opinions as a whole behind. You will always be our main source...for sure, we'll keep coming to you.
For Lan, instead of just being a left-out student in the school, he had the chance to have a proper education and became an entity in the future.
More good things will come to him and undeniably, also to you, Pakcik.
-Mimah-

Mimah,
You are one I can quote as a success story too. Of your brother I am yet to see his awakening! How I want him to be like his sister.

what a tender story, pak chik!

how gratifying it must be to have one of the stones you helped polish come back to sparkle at you “By the way, Pak Cik, I top my class in English!”

It is very gratifying, and that is my rewards.
As a courtesy, and curious to know a little about the guests who drop by, I tried your website in vain. Thank you for the visit, nevertheless, and you are always welcome. Salaam to you.

i'm so sorry you were dead-ended in your attempt to return visit. truth is, that blog register was just to establish an identity for my handle/nick so i don't have to comment as anonymous.

though the nick remains constant, i do admit to maintaining a semblance of net-anonymity in order to preserve some privacy.

may i email you instead to introduce myself better and remedy my lapse in courtesy?

Mekyam
I will be truly delighted and be looking forwards to it.
Pakcik

Pakcik
Assalamualaikum...
It seems to me that I have seen Lan before,but I am not too sure.How are you pak cik?What about mak cik?I hope both of you are well.I have just got my mid-semester exam result,Alhamdulillah,I managed to score the highest mark in Biology paper in my class,I wish I could repeat this next time.That is all I want to tell you.Wait for my call.Send my love to mak cik.
~AZMIERA~

Azmiera
Well done. I pray that you would do equally well in other subjects.
Lan's house is very close to yours, less than 300m I am sure.

Salam Pakcik..
congrats to Poklan because he tried his best to change his family life. I have known him since form 1 when I started studying at Al manar.. He was the most popular in our group..hehe..yesterday I met him again at pakcik's house after long times not seeing him..I miss pakcik, makcik and all my friends there. Thanks for everything pakcik..

You will soon graduate and be able to contribute to your family as well. Just do not forget others who you can help in their studies.
Pakcik