Acknowledging a gift from Awang Goneng

Saying ‘thank you’, which reflects a feeling from within, is one that ought to be delivered outright, spontaneously and promptly. Any hesitation in delivery may be misunderstood. On this score Pak Cik am guilty - to none other than the current celebrity, Awang Goneng. I should have said at the end of December last year what I am about to say now. 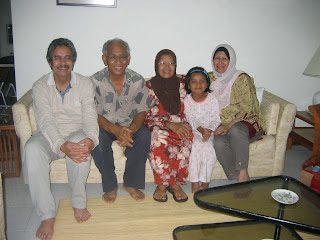 There was so much hullabaloo over the arrival of Awang Goneng in Kuala Terengganu. It was an event worthy of many events. Pak Cik could never hope to be heard. So Pak Cik have waited for the dust to settle before saying my piece. Hopefully, some will read and come to realise that, unknown to many, the celebrated writer is not, to Pak Cik and Mak Cik, Awang Goneng and his wife simply Kak Teh. They are very much dearer to Pak Cik and family than those glamorous names. They are simply Mi and Zaharah to us. So here goes what Pak Cik have to say to them :

"That Mi and Zaharah chose to come to our home on the very eve of the successful launching of your Growing Up in Trengganu was a gesture of your true humility to Kak Mah and Abang Ngah. Instead of allowing us to go down town to buy a copy of GUIT for you to sign, you took so much trouble driving a copy of your celebrated work all the way to Pengkalan Maras. How much greater honour can anyone hope to be given? Kak Mah and Abang Ngah pray that what we are seeing is just the beginning of something greater to come for you both. Thank you Mi and Zaharah for the visit and the precious momento."

So Pak Cik have had it out of my chest at last. Now comes the time to brag about acquaintances – call it name dropping if you may.

When someone becomes famous, many will naturally want to be identified with him one way or another. You should not be surprised to hear,
“ You know, my brother’s wife’s cousin used to go to school with Awang Goneng’s second cousin. And ….”.

A second person quickly interrupts,
“Is that so? But my wife told me her father’s brother-in-law once played football and won the game against a team which had Awang Goneng’s uncle’s third cousin in it. Not only that ……”.

Before he could continue a third person, not to be left out, cut him short,
“Now hear this. Do you know Awang Goneng’s grandfather was a very very important person in Kampong Raja, Besut? Besut is in Terengganu if you do not know. Believe it or not my grandfather lived in Pasir Puteh in Kelantan. You may not know the two states have a common border. A road links the two towns. Half way the road runs over a bridge across a river at a town called Jerteh. I have crossed that river many times. But many years ago there was no bridge. Vehicles of all sorts had to cross by ferry. So I am very certain my grandfather must have met that great Awang Goneng’s grandfather on that ferry. I am dead certain, I bet you.” 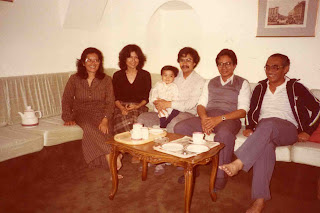 Yes indeed, Wan Hulaimi and Zaharah are no strangers to us. Our three children used to visit their home in East Acton for tea and sympathy. In fact we ourselves spent many a night in their flat on Chapelside. It was there Wan Goneng caught on camera our little boy enjoying himself in the long bath in his birthday suit! The boy could never forgive him for that embarrassing photo. It could very well be out in Awang Goneng’s next creation.

No, Pak Cik will not say any more. Those ex-Almanar pupils who have read Growing Up in Trengganu may get more information about the real Awang Goneng, such as how he commercialised ‘tempe’ in London town and how he was recently lost, driving in circles for one hour in Kuala Trengganu, of all place!

P.S. Just look at the two photos above. See what 24 years can do to people! 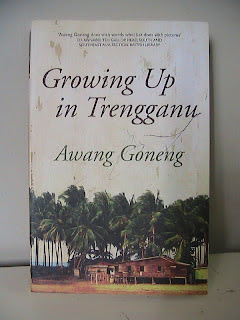 Some may want to have an update of what has become of those who performed well in their recent 2007 PMR - posted late December 2007. It is good news, a repeat of past years.

A few others may accept places at Sekolah Tekniks.

Pak Cik wish them all success wherever they may be, carrying the torch of Almanar.