When I passed my Cambridge School Certificate in Terengganu in 1955 and had a chance to join the Higher School Certificate in 1956 I thought I was quite good. At the same time another boy in Perak did the same and had a similar chance. He and I were born in the month of September, the same month but not of the same year. He was born TWO YEARS  later – making him two years younger, a plus point. Adding to his credit he beat me by two years in getting married.

That was where the comparison ended. The rest is history as the divergence in the rate of achievement between us has simply been phenomenal. Today, nevertheless, members of my family enjoy the pleasure of the privilege of having known this very man and his family for forty years.

He was then an MCS (Malaysian Civil Service, now the PTD) officer, and I an employee in the private sector; our wives were full time domestic managers. I do not remember how exactly we came to know each other. I suspect the normal ladies’ network brought us together. Living in the same vicinity of Damansara Heights/Bukit Damansara area and frequenting the same mosque could be a factor that brought us closer. At one point our homes were on the same road and were separated by a mere couple of houses. That was long before they moved to their new home perched on a cliff overlooking the residential area. Our home was also on a cliff, but half the height.

This gentleman has built a successful family - charity begins at home. That is probably one of the secrets that have enabled him to contribute towards nation building. Over the years we have seen how they raise their children. Their first daughter, for instance, has her own family and is herself a respected medical professor at a premier university. For knowing her since her childhood days we still address her simply ‘Yong’, leaving aside her Datinship, Dr,  professor etc.

Thirty years ago, when we were having a holiday in UK and our Yong had just sat for her SPM examination, we took her along driving around the country, including a trip into the depth of a slate mine in North Wales. 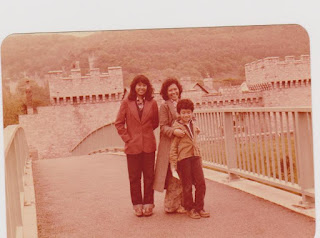 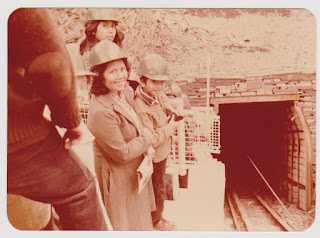 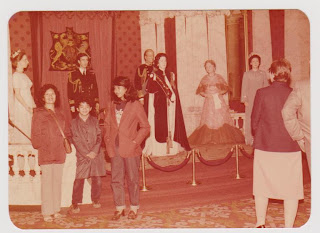 Two years after their first, the couple had another two daughters, a pair of twins. Only then we had our first, a girl as well - but our one and the only one, Ainun. Naturally, being girls of the same age, they became friends. Making the bond be tween us closer was the years when one of the twins, called Nana, and our daughter attended the same A-Level school in UK. As chance would have it, I was posted to work in London, allowing the two of us to keep an eye on whatever mischief the two girls were up to during their A-Level years. Nana did law and is now a very successful lawyer with her own practice. And now she has a daughter who is studying law in UK, following her foot-steps. 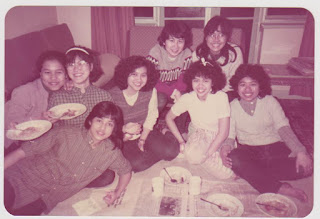 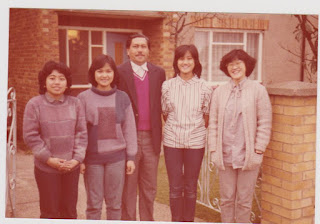 Nana smiling broadly on her father's , and  housemates in Bletchley
On far left is our Ainun

Nana’s twin sister, just ‘Jaja’ to us, is the principle, of a well-established private school in KL, and she herself has successful children, one of whom has just graduated in Australia. 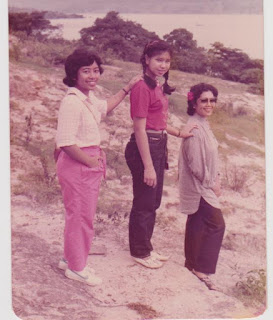 Their fourth daughter, ‘Opi’ to us, is a capable business lady. 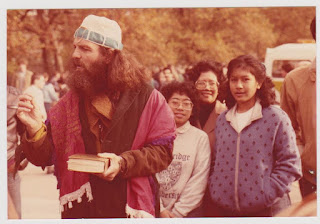 Opi ushered the arrival of the only boy in the family, Ariff, a handsome and very eligible bachelor businessman, and also an accomplished golfer. The talent he showed during his young days earned him a trip overseas, sponsored by his father, for a short golfing course. I would not challenge the father and son even at my best golfing days. I lost many a drink and golf ball to the father. And the son Ariff is in the Professional Golfers' class, one up on his father. 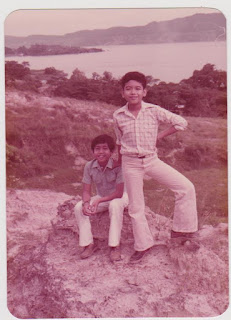 Ariff (sitting) with Amran, our third 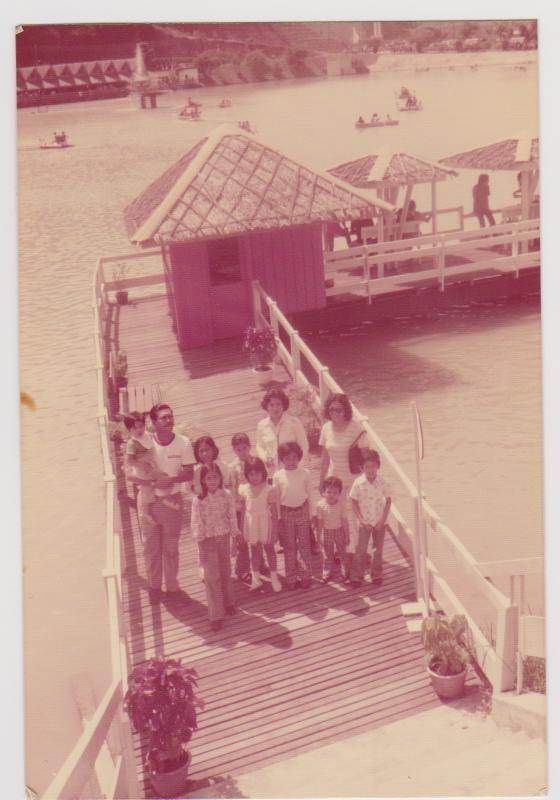 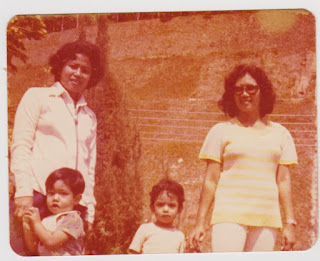 Who among us has not heard of Tun Ahmad Sarji Abdul Hamid?

That is the head of the family I have very briefly outlined above. His contributions and achievements are public knowledge and have been very well documented. I remember the challenge he faced when he was made to organise and head Lembaga Pertubuhan Peladang by the then our Prime Minister, Tun Abdul Razak.  That was way back in 1973. To me that was where he began to stamp his footmarks. Thence it was leaps and bounds.

Who would not associate this very special personality with the growth of such important bodies as IKIM and PNB?
The greatest privilege for me and my family is that we know every member of his family and have had the opportunity, as friends, to offer our congratulations for his numerous awards, from his first Datukship to Tan Sri and Tun. 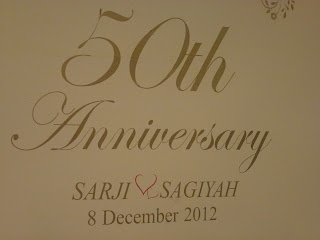 8th December 1962 - 8th December 2012
In December, 2012, the wonderful and successful couple celebrated their GOLDEN ANNIVERSARY, yet again beating me to it with no gurantee for us. An exclusive surprise party awaited the celebrating couple on their arrival from an overseas trip. It was amazing to see what the enlarged members of this family could come up with to entertain the special couple and close friends; playing the role of the Master of Ceremony, giving speeches, handling of musical instruments and rendering of songs, with emphasis onTun’s personal P Ramlee’s favourites. I know it too well the time when Tun started collecting P Ramlee’s tapes from the era of VHS and Betamex taping machines in the eighties. It was not a surprise to med when he began to write his book on P Ramlee.
That evening, while we watched the couple being congratulated by relatives and close friends, we were proud to be among them. 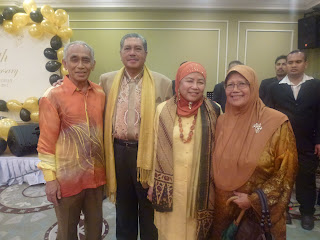 To me there is no greater value in a man than his uncompromised integrity and dedication. Perhaps, here, in a very small way, I can hope to detect some room for me to share his values.

Just for the fun of it - Subject YES

Subject: Yes : If you can read this OUT LOUD you have a strong mind.And better than that: Alzheimer's is a long, long, ways down the road before it ever gets anywhere near you.To my "selected" strange-minded friends:If you can read the following paragraph, forward it on to your friends and the person that sent it to you with 'yes' in the subject line. Only very good minds can read this. This is weird, but interesting!

Even if you are not old, you will find this interesting...

Once you've found the B

OK, NOW THAT YOU HAVE MADE A WISH, IT WILL COME TRUE.....ALL YOU HAVE TO DO IS FORWARD
TO THREE PEOPLE BUT IF YOU FORWARD TO MORE IT WILL HAPPEN SOONER!!


Do send this message on. It is great fun and good for the Brain!!!

Fifty years ago I began to earn my keep soon after graduation. Thirty years later it was my children’s turn. This month it is my first grandson’s turn. There is one big difference, though; this boy has not even passed his SPM. It is true that he sat for it but is still waiting for his fate. But his parents cannot afford to maintain an unemployed individual nesting at home. Realising this he, without as much as a word of permission from anyone, went job hunting!

It is fortunate for this young man that his place of work is at a pizza something, just a walking distance from home at Damansara Heights,. What I cannot understand is why, with his uncertain school qualification, he has been promised a monthly earning of almost the same as my monthly salary with a multinational fifty years ago and with my scroll and all. Have the financial pundits coined the term ‘cost of living’ to explain this?

So, ladies and gentleman, if you happen to be eating pizza around there and see this boy, give him a generous tip. He needs to save as much as possible in case he does well enough in his SPM to continue his studies. 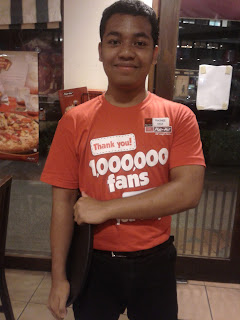 Ready, willing and able to serve with pleasure

I assure you that he has been well trained to serve. His father was there as customer and his grandfather will be there, too, insya Allah, to check on his performance. 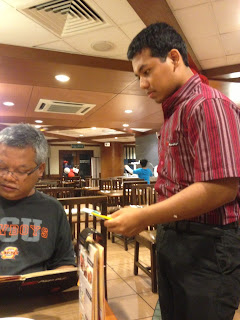