Why is it so hard for some to declare their age? We need to steal a glance at someone’s Identity Card and the number tells it all. It is as easy as that, isn’t so?

One of my lunching friends from the Group of 1955 says that according to his IC number he was born in early 1936 making him 77 now. Discreetly he keeps reminding me that he expects respect from me because he is very much older, hence my senior.  His elders helped to cheat on his date of birth to make him young enough to be eligible to join the Secondary English school after completing his Primary Malay School.  I have heard this sort of claim from elder members of my family. It was normal before our Independence, before we even thought of IC. So if I say I am 76, showing my IC as proof, you need not believe that I am that YOUNG! I could have cheated to convince my Makcik that I was not too old to be married to!  In short, this friend I often go to lunch with, is my senior. I call him Dzul for Dzulkifli, spelt differently from the accepted spelling, Zulkifli.  Now do not let me digress into explaining the reason/reasons for the spelling of his name. If I do that I would be tempted to tell the world that I own THREE names, all legally documented, plus at least two other names. Persons of my age group and older would do wonders with age and name just for a simple reason. 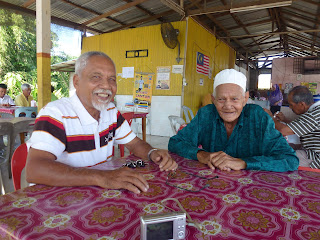 
Lesson to learn: Do not always trust an IC number nor trust the name shown!

Knowing that Dzul is senior to me, not just in age, mind you, I give him his due respect. At times I salute him in recognition of his old position as a Major, a commanding officer in the Territorial Army (Askar Wataniah), for which he was awarded with PJK, AMN etc and I am just a simple Pakcik, full stop. You see, he was all for voluntary work long before I understood what services for the community meant. Now let us go back to this IC business.

One day last week, on my way home from shopping with my other half I was waved down at a road block strategically set up soon after a sharp bend. I always think that this is a devious and an unfair way to catch an errant motorist like me. Standing humbly in front of the police man I did not have to see his IC to tell that the he was a young officer paid to do a job.  And I knew it too well, why I had been stopped. Both of us, my good wife and me, did not have our safety belts fastened. Dutifully, as requested, I handed over my driving license and Identity Card.  At the same time I pleaded to be excused.

“ Encik ( Mr ), we have just come out from a shop around the corner. Pakcik ( I )am an old man and I have no intention of breaking the law willfully. Please look at Pakcik’s age on the IC. An old man like me forgets some time. I cannot drive very fast and we are close to our home.”

It was the power of suggestion and my addressing myself as a humble ‘Pakcik’ (Uncle) instinctively made him look at my IC number to determine my age. Well, I knew it worked when I saw his face breaking into a smile. Changing to a much gentler voice he addressed me,  “Pakcik, my father and you are of the same age. Pakcik may go now. Please, don’t do it again.” If only he realised that it was my third time to be caught and all were at the same spot as well!

You see what happened when one believed an IC number.

That is just the prologue to this short series. It is all about age and IC numbers.

My yesterday class at Almanar started late, at four in the afternoon to be precise. Having so much time to myself, from morning until four, I contacted my lunching ‘senior’, Dzul and suggested a drive to Kuala Berang about 40 Km away from K Terengganu. A week earlier there was a short write-up in a daily about a man named Idris who was 109 and healthy. That intrigued and prompted me to learn the secret of longevity!

As planned, the two of us left his house at nine sharp. It was a pleasant morning’s drive with me co-piloting my ‘senior’ driver. Soon he was getting irritated with the number of traffic lights he had to stop and start. Believe it or not we had to go through 30 traffic lights on that 40 Km trip to Kuala Berang. On our way back I did the counting, meticulously giving a tick on a piece of paper each time we reached a traffic light along the four-lane highway. Terengganu city planners seem to have special craze for traffic lights and one-way streets!

To pacify Dzul I expounded the theory behind the number of traffic lights and one-way streets. Our learned city planners want to be sure that visitors to beautiful Terengganu drive round in circles and stop at as many places as possible and go round in circles in order to make them stop to watch and appreciate the beauty of this city and its environments, instead of whizzing through without as much as digesting messages on the many gigantic billboards along the roads and at road junctions. Keropok lekor and nasi dagang should not be the only reason for ‘visit Terengganu year’.

In Kuala Berang we were joined by another senior person. His name is Hj Abu Bakar, a cousin of Dzul’s father, and he is 84 years old, according to his IC. Looking at Dzul and his Pak-sepupu ( father-cousin) I do believe he is 84.


It is not inappropriate to make a stop here. I have more things to write about these senior people mentioned above. 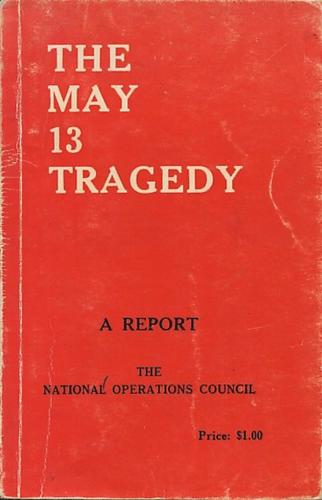 You are the judge

Come to my part of the world to witness how they battle tooth and nail, for what?
(Regret, pictures cannot be enlarged) 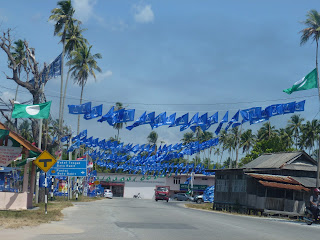 Coming into the road along the beach 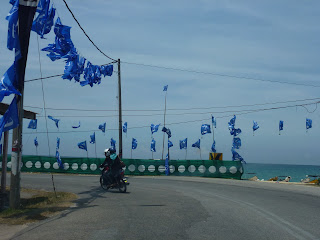 From the sea crawls the turtle 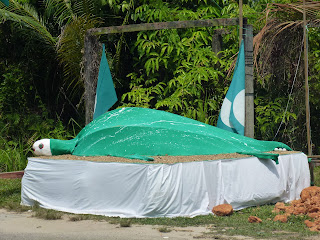 We are watching you from up abovee 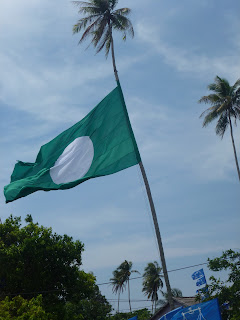 Under our shadow we assure you of your future 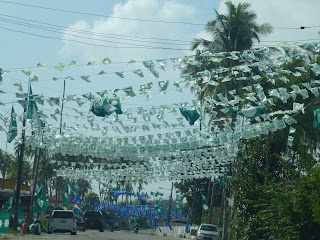 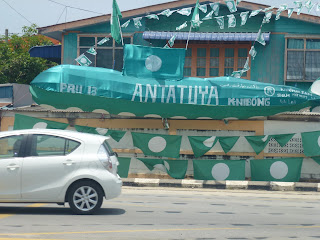 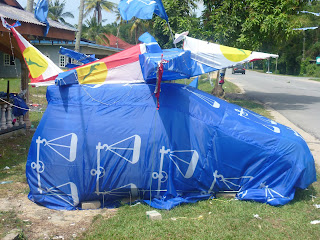 You don’t think we have a more fearsome fighter plane, do you? 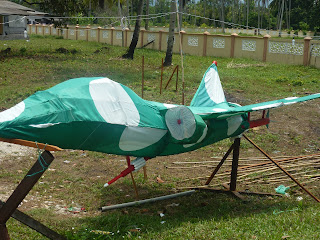 And we have super rider 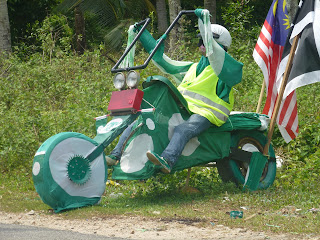 Not to mention our stuntmanl! 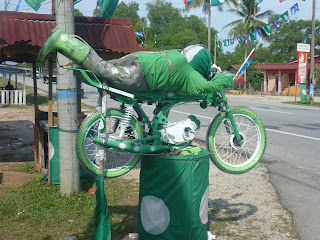 You are really forcing us to use our big gun 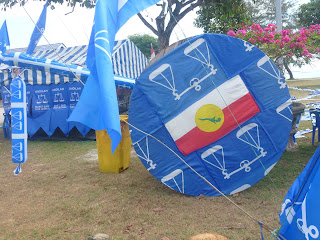 
What a shame. While they are squabbling  we have come to cast our vote peacefully 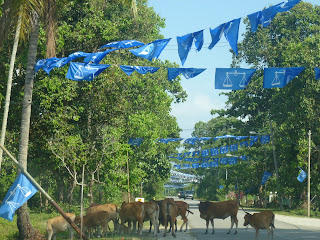 And some of us are tired of waiting. It is so hot out there 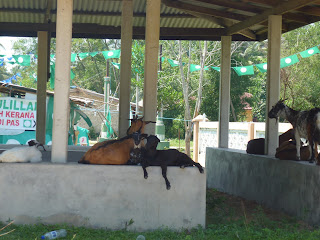 
And let me tell you all, my friends
The Judgment Day is sure to come.
Your worth will surely be weighed. 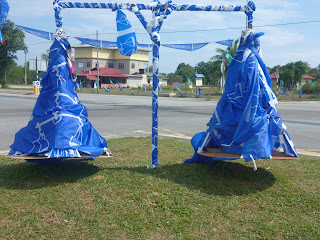 Be sure all that glitters is not gold