13th May comes and goes every year. But 40 years ago one 13th May came and is gone forever, leaving an indelible memory of an event – the fateful 13th May 1969 and the few days that followed.

It was a tight 24-hour curfew in and around Kuala Lumpur following the worst racial conflict in our history. One risked being shot at not only by the enforcing miliatry but killed by either of the two warring factions. Kuala Lumpur was a dead city except for the military vehicles.

In those days, a petroleum depot existed strategically in Brickfields area of Kuala Lumpur, now part of the KL Central. Police and military requirements of petrol and diesel oil in Kuala Lumpur were sourced from there. Their vehicles would cease to run the city streets if that small depot stopped to operate. To maintain supplies of oil products from the depot, tank valves would need to be opened, pumps would have to be run, bulk meters to be set, bulk lorries to be moved into position and filled with products, and drivers to take the vehicles to the police and military depots, not to mention the necessary documentation to be prepared.

Pak Cik became a central figure to organise what was needed done. Escorted by police Pak Cik had to fetch a supervisor and a driver from their homes. They in turn fetched a skeleton number of staff. ‘All oil tanks at the police and military depots must never run dry’ was the simple brief Pak Cik had; and that I had to obey without question because the answer was so obvious. 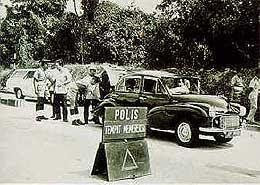 Those were days when hand-phones and computers were no-existent. Using my two fingers I remember typing delivery orders. I remember helping to turn the tank valves and operate the pumps. All basic knowledge had to be put into practice, like it or not. With a few staff we managed to keep oil supplies going. Pak Cik was privileged to have a special pass to break the curfew. I became an unwilling key personnel, driving a company van with its logo (for safety identification?) along the deserted roads of KL, fearing that I would not be mistakenly shot at by the police or the ‘enemies’ whoever they were in those few initial tumultuous days.

I remember it too well the time I drove alone along the narrow end of the deserted Jalan Tuanku Abdul Rahman, feeling eerie, fearing that an unknown 'enemy'would choose to take a pot shot at me from one of the upstairs windows. I had no wish to be a dead hero.

Pak Cik find it hard to forget the morning when a member of my staff came up to me all shaken up. “I was nearly stabbed to death,” he began to relate his frightening experience. He was a young Malay with very fair skin. He could pass for a Chinese. At one point along the Federal Highway his car was stopped by an angry Malay mob who wanted to kill him. He tried and tried in vain to convince them that he was a Malay. Only the utterance of ‘dua syahadah’, his last recourse, won him his freedom.

Pak Cik can carry on reminiscing about the 13th May 1969 but it is all mine, meaningful only to me. There are books written on this. Pak Cik would only want to leave you, ex-Almanar pupils with one question that I will ask and answer it myself.

“Do you want to go through all that over again, Pak Cik?”