From Teng Teng Teng to Wan Toteng - Halloween Or Monsoon ?

Pakcik Googled to get what Halloween is. Here it goes:

‘Halloween (or Hallowe'en) is an annual holiday observed on October 31, primarily in Canada, Ireland, the United States and the United Kingdom. It has roots in the Celtic festival of Samhain and the Christian holiday All Saints' Day, but is today largely a secular celebration.
The Celts, who lived 2,000 years ago in the area that is now Ireland, the United Kingdom, and northern France, celebrated their new year on November 1. This day marked the end of summer and the harvest and the beginning of the dark, cold winter, a time of year that was often associated with human death. Celts believed that on the night before the new year, the boundary between the worlds of the living and the dead became blurred. On the night of October 31, they celebrated Samhain, when it was believed that the ghosts of the dead returned to earth.’

I am not in the least interested in the Haloween. But during my younger days I happened to be among the community who celebrated the Halloween night., the end of summer and the beginning of winter. So in a way Halloween is not altogether something foreign to me.

Right now, however, I want to write about Monsoon, the end of a hot spell and the beginning of rainy season with wind and salty air. That is as far as the similarity goes between HaloWEEN and MonSOON – from summer into winter, from hot spell into wet season.
------------------------------

Just past midnight I woke up from my sleep last night hearing the sound of window panes vibrating in the wind, and the continuous droning sound of waves hitting the sand. I knew too well what that meant, the arrival of monsoon ( musim tengkojah )on the East Coast of peninsular. If tonight is the Halloween, last night seems to herald the arrival of our wet season. 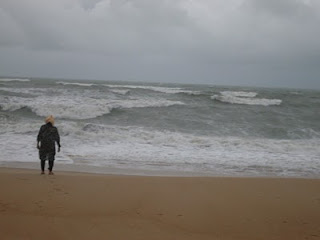 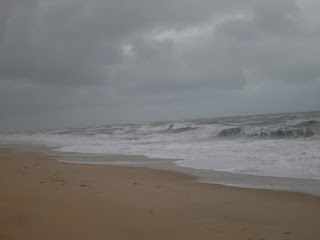 True to my expectation the sun never showed its face all day today. The sky was totally covered in layers upon layers of grey clouds and the rain came down in drizzles all day long. In between the drizzled I ran out through the gate of my backyard to take some shots of the grey sea. Waves, moving with increasing speed, unrolled themselves onto the sandy beach spreading sheets of white froth far and wide. I turned to look to the tops of coconut palms lining the beach. As expected their leaves were being swept landwards in the wind which was blowing hard from the north east direction - the forerunner of the famous North East Monsoon, my winter without snow. 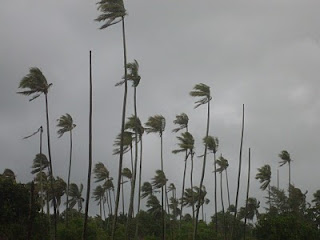 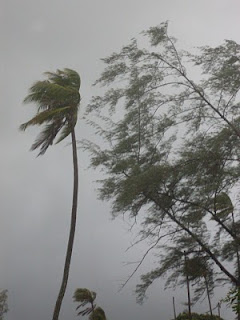 While I now enjoy the cool wet weather of monsoon my heart bleeds for the men whose livelihood depends on the generosity of the sea. I know for sure some of them are fathers of my pupils. It is a painful time for them. And tonight, after more than nine months of hot weather, I will not have to switch on the aircon in my bedroom to enjoy my sleep. And the ghosts of Halloween are enjoying themselves playing and singing in the rain.

I sat wondering what subject should be chosen for my next posting when the following message appeared on the screen:

“ Salam …….
Pakcik, just dropping by to share some good news. Yesterday was the day I officially graduated with a degree, alhamdulillah, after 4 years. I’ll be heading home by December, looking forwards to meet you and makcik.
Lots of love from Bandung.”

That is from Fara Waheda who hails from the fishing community of my neighbourhood. Here is another lass I admire and am proud of. She will now return to Malaysia as a graduate in pharmacy, a pride for her family and the community as a whole.

In response to her message I have this to say to her:

Makcik and Pakcik congratulate you on your success.

It does not seem such a long time ago when you first stepped into Almanar. You were not happy with the facility at the boarding school you enrolled yourself a couple of months earlier. You had a mind of your own and decided to join a day school instead. Almanar was more than happy to accept you for extra tuition.

I do not easily forget how you strived to be among the best.

I do not forget that easily when you were faced with personal problems and accepted a shoulder to cry on.

And after all these difficult years you are leaving Bandung behind to return home qualified, hopefully ready to serve. You are an asset to your family in the first instance and to the community at large. Challenging times are ahead. Life is never that simple. Bur I know you have learnt that over the years. Perhaps one day Batu Rakit may yet see its first chemist’s, owned and managed by one belonging to its community.

We look forwards to seeing you, Fara.

I regret not having your photograph to accompany this entry. We will put it right when you are home later. We will record you cheerful smiling face.
Posted by Al-Manar at 10/28/2010 11:58:00 pm 25 comments: 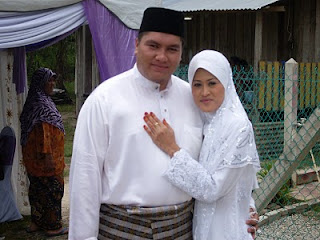 Hazri, the subject of my series, End Of The Tunnel (Pt 2) series, sent the following comment:

Teng Teng Teng . At last, my mission has been accomplished.

Yes, indeed, this qualified mechanical engineer has accomplished his mission – acquiring himself not just a career but also a life partner.

Pakcik and Makcik attended their wedding reception last Saturday, Oct 16th. The whole kampong were there to celebrate the occasion. Sadly the one who most wanted to see his son end the family’s fisherman saga was not there. Ironicall, his grave lies a stone’s throw from the house. To him we offer Al-Fatihah, and to the newly married couple we wish a happy and successful married life with equally successful children to start another mission.

When the bell tolls, time is up and we have to drop our pens. We did what we could and now we wait to know what there is in store for us.

On hearing the death of her father I drove to their house barely five kilometers away to join the ‘sembahyang mayat’, the last thing I could possibly do for someone I had known for several years. His eldest child, Syuhada and a younger brother are ex-Almanar pupils.

I arrived somewhat early. As I was waiting for the rest to come I sat quietly looking at the plants in the grounds of the house. A clump of banana trees caught my sight. Some ten years earlier the man of the house gave us a young plant from that clump. I had it planted near our house and that had grown, multiplied many times over, giving us beautiful Pisang Abu, especially good for frying and making‘pengat’. I remembered admiring this clump of banana plants the first time I was in this house. Today the same spot still had banana plants. The old ones had long gone replaced by younger ones. Funny, I thought, how banana plants kept generating themselves. But the one I brought home had not produced healthy young ones like the ones I was looking at now. Perhaps the man of the house knew how to do it and I did not. But today he had gone. I wondered who would now take over to look after the many plants around the well fenced grounds of this house....

Suddenly I was awakened from my reverie. It was time to say our prayers for the deceased man of the house, the owner of those flourishing banana plants.. Yes, there he was lying motionless and all of us stood in rows to say our prayers, knowing it too well that each and everyone of us would have to go through this moment, no matter what we were, rich or poor, among the proud or trodden low, the lot of us without exception.

I will now continue to have him in my memory with Alfatihah in my heart and a lump in my throat.

Only four days earlier Syuhada dropped in at Nuri to tell Pakcik and Makcik that she had been called to report for duty on the following Monday. Din of my earlier post was to report for duty as well on the same day and at the same university hospital. Like Din, Syuhada had successfully passed the final exam at the University hospital, a coveted place to work, and she was now a qualified a nurse and din in radiography. More than three years had passed and it seemed not very long ago I sat with her, guiding her how to go about the interview, which she ultimately went through successfully.
We were happy for her and for her family that come Monday she would start working - never for a moment it ever crossed our minds that it would be a fateful Monday.

The Monday came and I told myself that it was truly a memorable day for two of ex-Almanar pupils, reporting for duty on the same day at the same place. There could not be many teachers who could boast of having two ex-pupils achieving this. And this was not all. There were two other ex-Almanar girls who reported for duty here two years ealier, making a total of four ex-Almanar pupils working here. If that is not enough, the fifth one has just been accepted to do a course there (a likely subject of my future posting.)

It was late in the evening of that Monday when I was shocked to receive a short sms from Syuhada – her father had just passed away of a heart attack. Subhanallah. How HE had planned to take away a man at the end of the very day he was happy to know for sure that his beloved daughter had safely reported for duty - satisfied his mission accomplished.

p/s: Unlike Din of my ‘End of the tunnel (pt 9)’ series, Syuhada, for reasons of her family background, does not quite qualify to appear in that series. She belongs to a home in which children have what it needs to develop themselves without handicap.
Posted by Al-Manar at 10/10/2010 10:15:00 pm 44 comments:

From Russia With Love - Just a picture 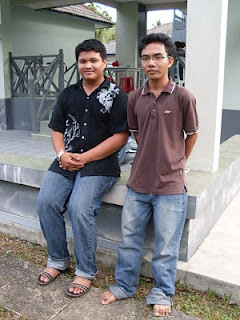 Yes, that is the picture of Hairie, the one sitting on the left. Hasn't he the likeness of a Russian boy ?

For whatever reason I had in mind Pakcik took that picture. The other boy is Faizal about whom I intend to post something shortly. They form a good pair. And I wish them both success, and they will live up to :


Our visitor, Ninotaziz left a comment to which Pakcik responded. Typical of her, a talented poet, she sees ordinary words and phrases as having special messages. Following that response she left a second comment. Here it is:

With Ninotaziz’s permission, here is her short pantun in three languages:

But not the king’s jeweler …

Thank you, Ninotaziz. Fifty years ago Pakcik might have tried to put that into Arabic!