Over thirty years ago we were blessed with three children That, apart from the very life that we are still breathing today, is His most meaningful and invaluable gift to us. 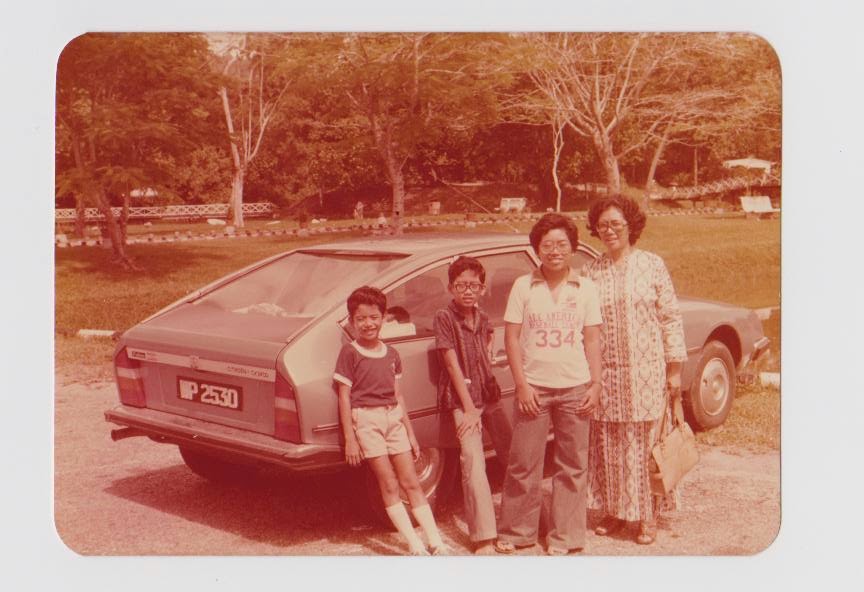 It was a real test of courage for the mother when those three babies were destined to come into this world through caesarian operations, which by today’s standard was primitive in those days. To put it crudely, a doctor would cut up enough opening in the mother’s abdomen for the baby to be taken out and the gap stitched close with whatever thread used at that time. That harrowing and traumatic part was replayed a week later when the thread that bound the wound had to be removed; what fear and pain accompanying it. To go through that traumatic experience once was enough but having to go through that same process the second and third time was psychologically a torture. Nevertheless, this mother surrendered herself to Him simply for the strong desire to have more children. The prominent gynaecologist of that era, Dr McCoy recommended a permanent stop against any fancy idea of going beyond three, let alone to go for ‘cheaper
by the dozen’ !
____________________


A past president of MMA (Malaysian Medical Association)
He was among the first group of students to be admitted to the University of Malaya in Singapore when it was founded in 1949.Dato' McCoy is currently a member of the Canberra Commission on the Elimination of Nuclear Weapons, a group of seventeen distinguished and eminent persons from 12 countries appointed by former Australian Prime Minister, Paul Keating to propose practical measures for the elimination of nuclear weapons.
From Straits Times on the occasion of 'Victorian of the Year 2004' - Victorian Indtituition, KL
_____________________________________


Today with improved technique, a mother can go through such operation practically unlimited. Our own daughter braved through four operations with a smile. The dreaded and painful experience of unstitching the wound was no longer necessary with self-dissolving thread. Some mothers, we are given to understand, opt for operations for personal reasons; such as a desired birthday for a baby and in some cases, I am given to understand, to avoid any body damage to the mother.

n/b: We have our way of marking birth dates for the three children, encoded in the car number plates - the inseparable three. 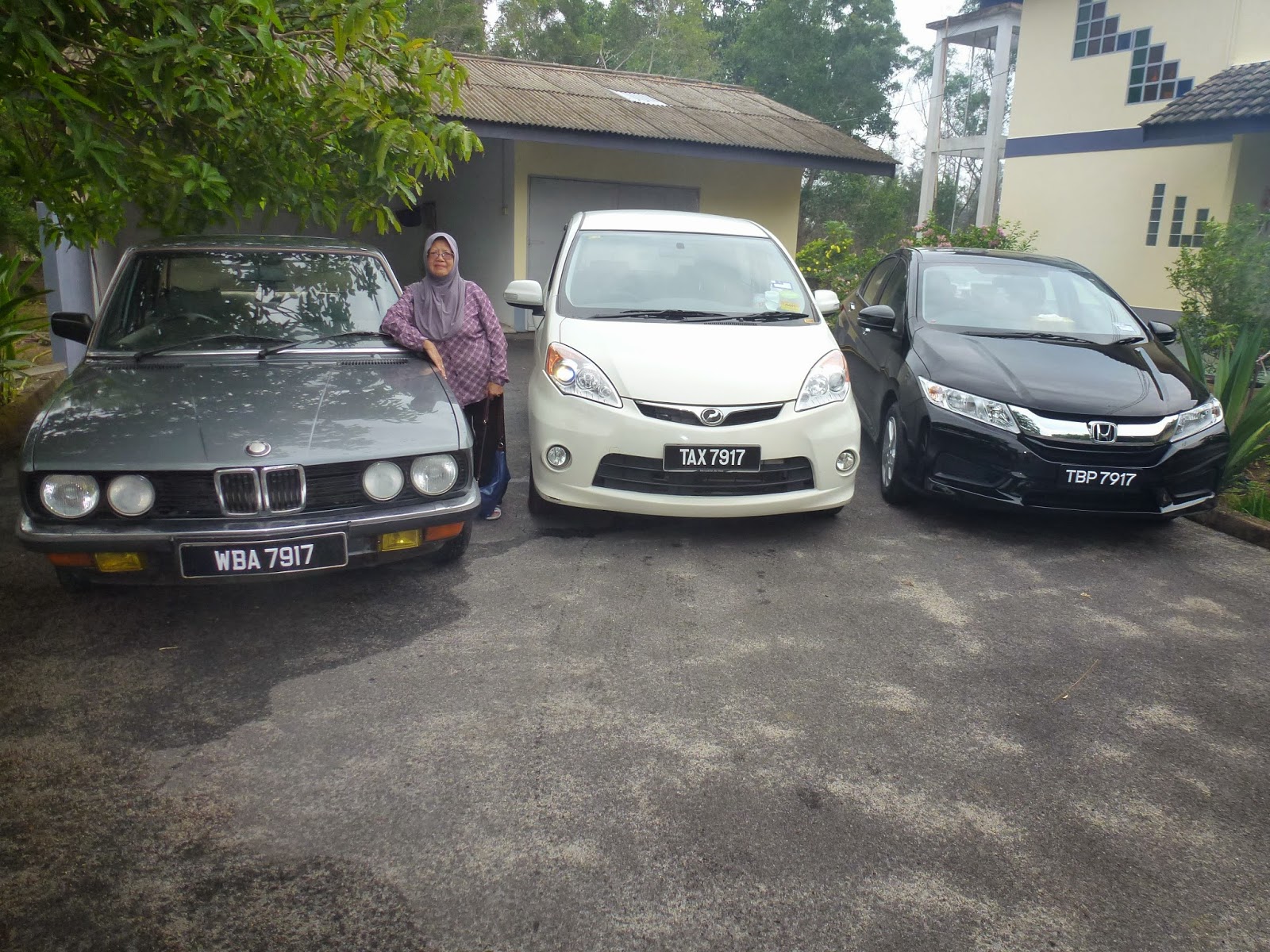 Today, as an expecting father, I recall those harrowing moments when I sat saying my prayers for the safety of my beloved life partner.

Some years later when the three children reached their schooling age I was determined to start them learn the meaning of humility through the process of growing up. We had a comfortable life but the children had to learn that ours was not the norm. For that reason we decided on two schools in Brickfields, thirty years ago, a semi slum area where one would find homes of poor families and accommodations for general labourers of Malayan Railway and squatters as well.

One would not see a child being scheuffer-driven to those two schools. Makcik used to volunteer to prepare milk ( from milk powder donated by a company) and dispense it to poor children at the school. It was also not unusual for one of our children to tell us on his return from school that a friend borrowed five or ten cents to make up enough to buy something. Our advice was never to accept the money back, whatever was given was to be treated as a gift. In those days it was not uncommon for children to go to schools with 20 or 30 cents each. We wanted our children to realise how lucky they were in life. No one talked in those schools about having enjoyed holidays abroad.

Indeed, our three children survived well at those lowly-rated schools. But their father was a ‘tyrant’ at home making them work extra lessons. And today, that ‘tyrant’ has spent the last twenty years ‘terrorising’ the poor children at Almanar. And, hopefully, our children and grandchildren, continue to live with full realisation that there are others whose life is not as fortunate as theirs.

On Saturday 5th June a large coach which could accommodate 45 passengers stopped in front of the gate of Almanar which suddenly seemed diminutive and humbled by comparison. No such a large passenger vehicle ever stood there. 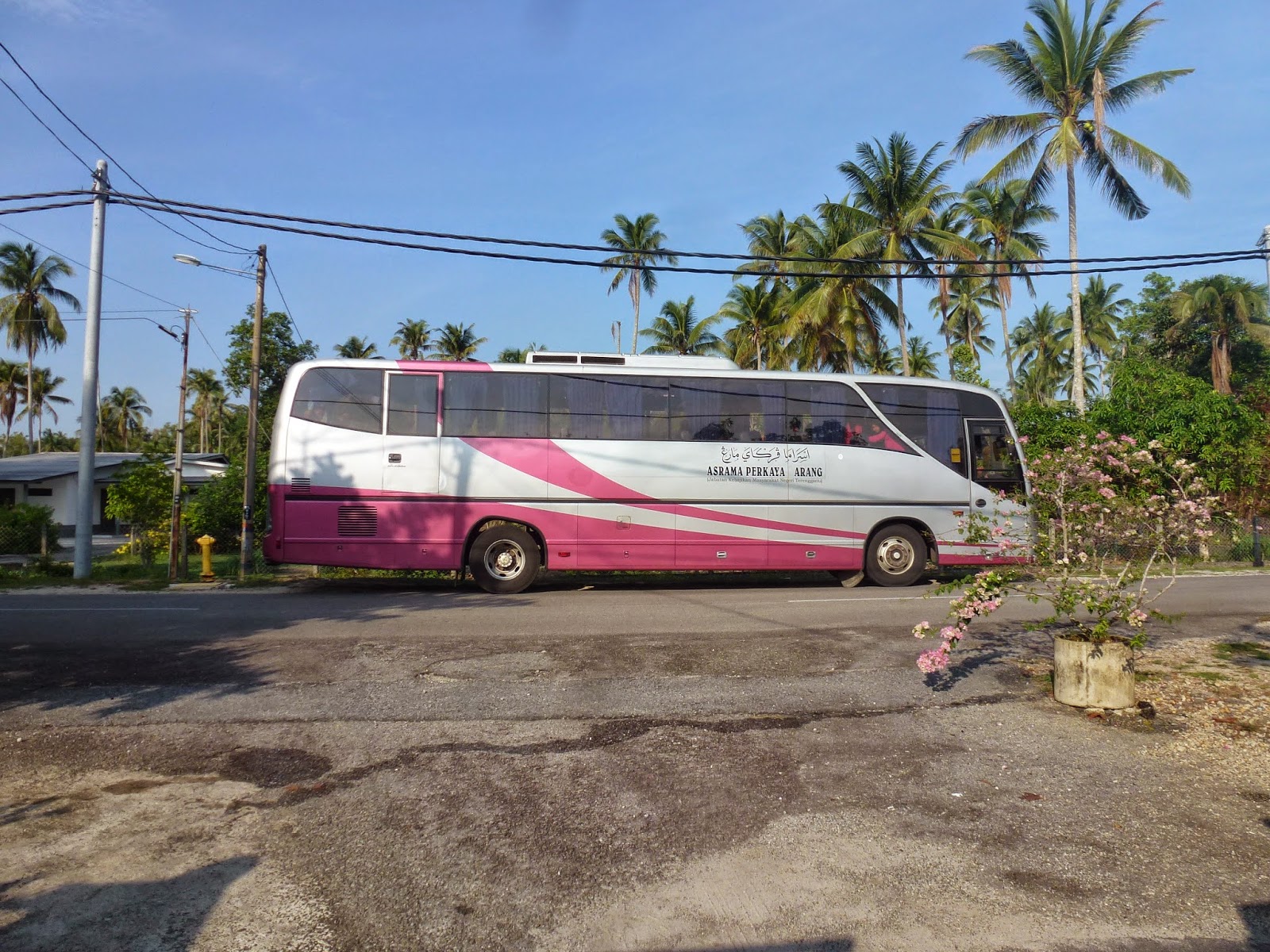 A 45 seater from Perkaya Orphanage 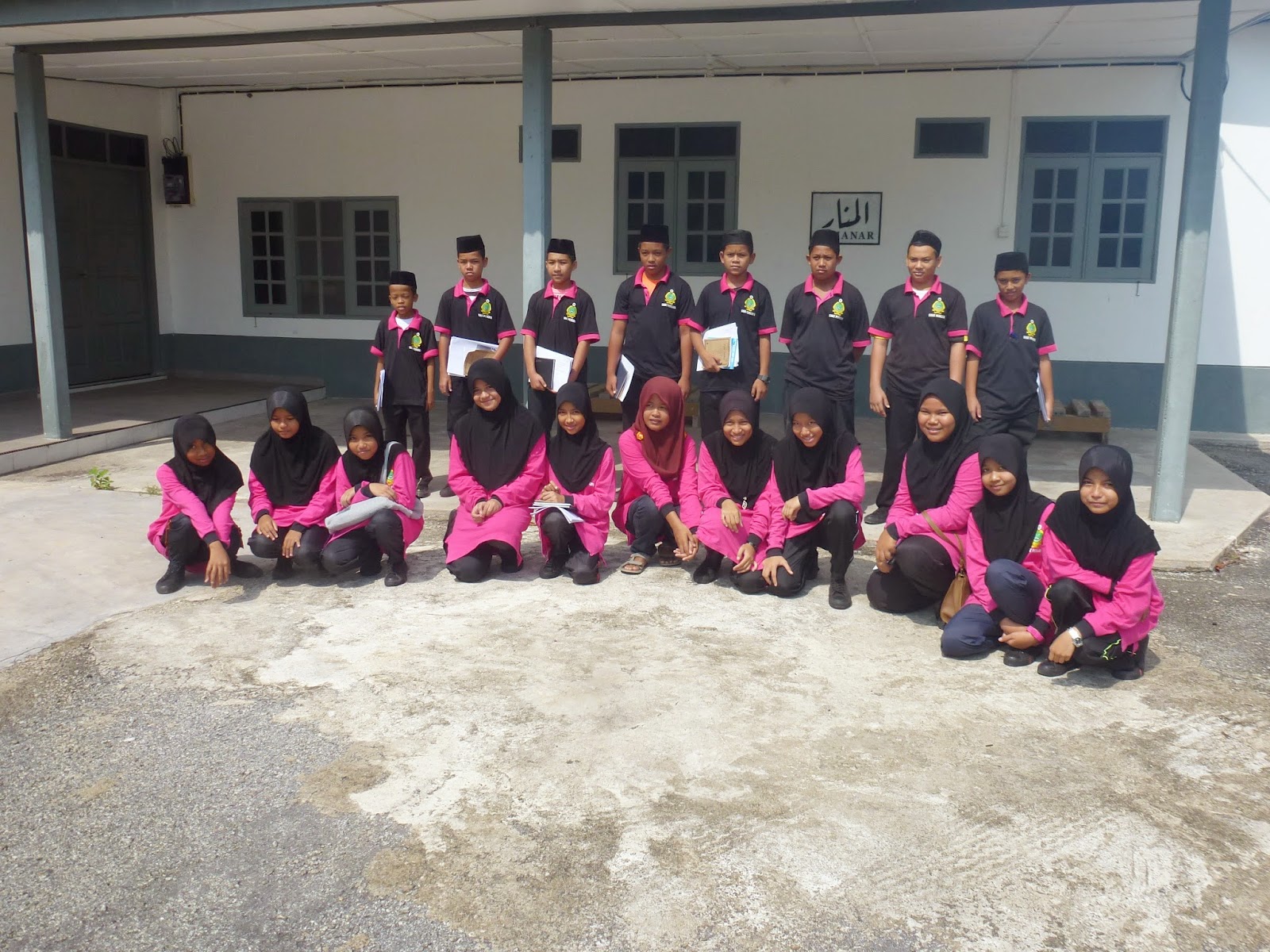 A group of twenty children alighted and streamed through the gate. That was the first group of Form 1 children from PERKAYA Orphanage to begin their tuition class here.

Comfortably seated after their long ride ( return trip of about 110 km from Perkaya Orphanage to Almanar) they sat listening to the first few introductory words of welcome from Pakcik. Their surprise was noticeable when told that the man standing in front of them was, from then on, to be simply addressed as “Pakcik” or “Pakcik Hassan”. Such terms as teacher, sir, master etc were not acceptable.

Pakcik’s next point was on the normal practice at Almanar; for instance, the day here should begin with recitation of Al-Fatihah for the loved ones who have gone before us, including those who have donated to Almanar’s needs. On that note I proceeded to say, “ Sekarang (selain mereka yang tidak boleh sembahyang) marilah kitta hadiahkan AlFatihah kepada arwah yang kita kasihi dan…..”. The word ‘arwah’ brought a lump to my throat. Like being hit with a hard brick it dawned on me that those faces looking straight into my eyes belonged to twenty boys and girls who had, without exception, lost their fathers. One of the girls had lost her mother as well. I had to swallow hard the moment they began reciting the Al-Fatihah. I had never experienced addressing a group of children who have lost their fathers. They are now Pakcik’s children. 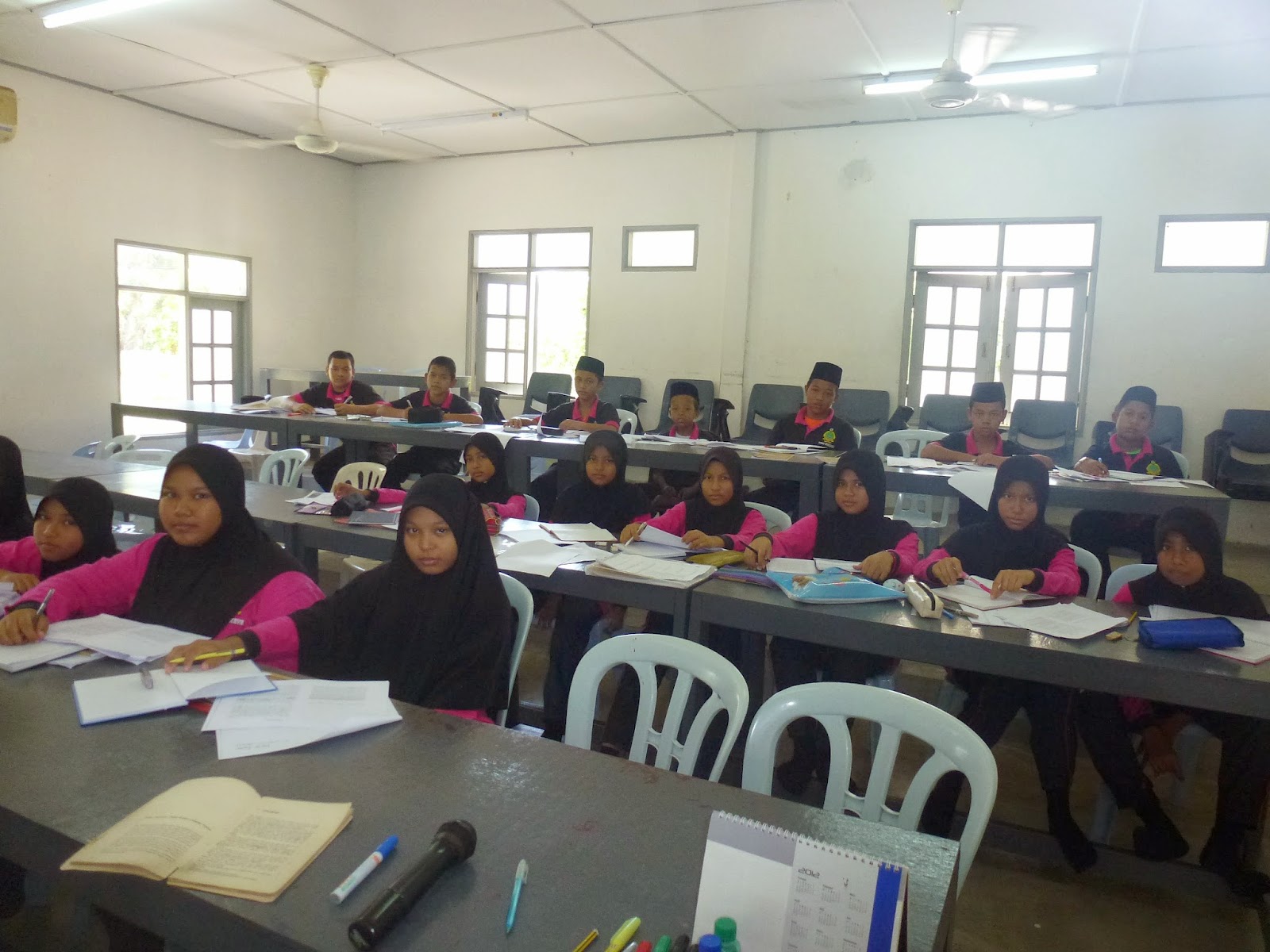 Two days later I invited a friend for a drive down south of K Terengganu along the peaceful coastal road to Perkaya Orphanage where I had never been. It was a pleasant 55-km drive and under an hour we were at the administrative office to get the direction to the Principle’s room.  It was quite a long walk through passages between classrooms. At one point a group of children appeared from around a corned ahead. They were walking straight towards us. Then came the unexpected surprise.  They group caught sight of me and recognised me. In an excited loud chorus, they cried out, “Pakcik Hassan!” and ran towards us, the boys holding out their hands to kiss mine. That spontaneous warm welcome after just one meting at Almanar two days earlier truly touched me. Yes, they had accepted to be my children.

The second trip of Perkaya coach to Almanar brought the same Form 1 children again and a group of ten Form 4 children, the members of the latter group had also lost their fathers. 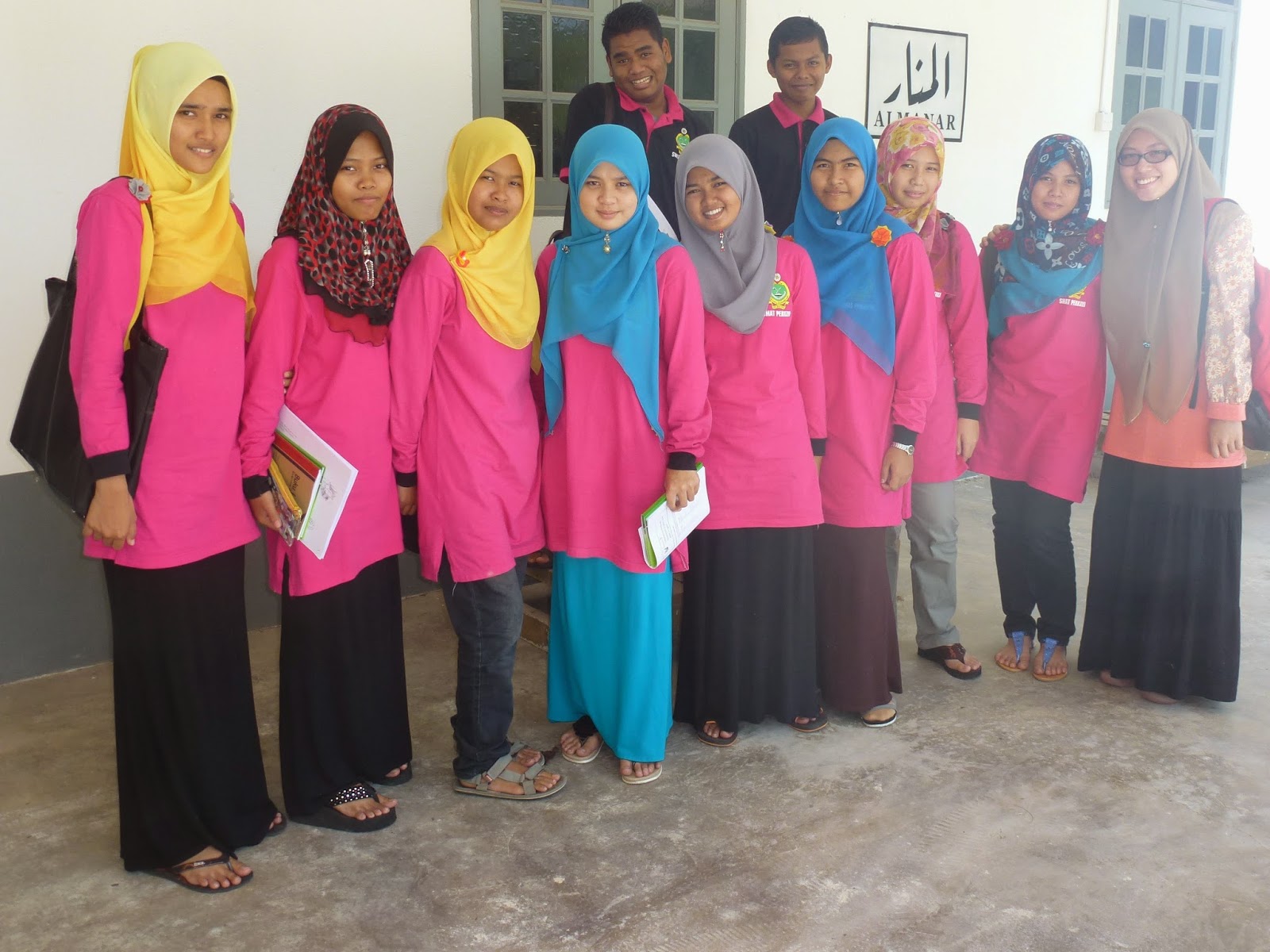 Form 4 children and their temporary teacher, Kak Mira (the dentist-to-be) on the right

It was fortunate that I had an ex-Almanar girl, Azmiera, to help me with the two groups that day. She is home on leave from her university and is free and ready to help. She has another month to help at Almanar before going back into her final phase to be a graduate dentist. It pleased me to notice the potential dentist, also one who has lost her father, handling a group of orphans and being addressed as Kak Mira by the children. Perhaps I should mention at this juncture, that Pakcik and Makcik have also lost our fathers and mothers – making us truly ‘yatim piatu !  Almanar is turning into an all -orphan institution !


The period of last twelve months has been unusually quiet at Almanar as the number of children attending classes has plummeted down. I will not elaborate on the reasons for this sad state of affair, because, doing so would force me to point my finger at the much-publicised and self-applauded success of the new ‘education blueprint’. If, a few years ago, children would stream out of schools around 12.30, they do so now as late as 3.30, exhausted and hungry. I am talking about children around my vicinity, where many poor children go to school without proper breakfast, and with a mere 2 to 3 ringgits in their pockets. I used to start my afternoon sessions as early as 2 o’clock. I can only do that today on selected days, but not earlier than 3.30 during school days, and at time on weekends, that is, if the schools decide not to have extra classes or other activities.

Alhamdulillah, this current Ramadhan month has brought to Almanar a very special parcel of joy, the very thought of which would not even cross my mind. The largest orphanage welfare organisation of Terengganu, popularly named PERKAYA, has approached Pakcik if I care to help some of their children. They are currently managing four orphanage centres in the state. Would I reject a gift from heaven, ‘orang mengantuk disorongkan bantal?’

Of the four centres, the largest, accommodating nearly 400 primary school children, is 55 kilometers from Almanar. That distance alone was reason enough to deter Pakcik from entertaining the idea of associating with that organisation, a rich body operating successfully one of the largest palm-oil estates in the state.

To my great disbelief, a representative from that body rang up for a meeting with Pakcik. At eleven in the morning of the first day of this fasting month, three top ranking officials duly called at Nuri (Pakcik’s home) to clarify what assistance they would seek from Almanar.
Over the many years, the four centres have been providing homes for the orphans, who are then transported daily to various schools in the vicinity. Two years ago a major decision was made to open the body’s first private school at their largest centre, and that school was officiated just over two years ago; its first group of children are now in their Form 3. To run this private school fresh graduates have been recruited. Sadly, within this short period the school is now being managed by its third principle.

To my surprise the first concern mentioned was whether Almanar would assist in guiding a number of Form 4 children with the hope that the orphanage would, for the first time, realise a ‘record-breaking’ SPM results. Seeing one pupil obtaining all ‘A’ grades seems to be the most elusive target! Of course assistance is equally needed for the children in their new school. Of great concern to them is the standard of English and Mathematics – despite the famous and much acclaimed success of the ‘blue-print’ and PBS whatever!

The main areas of concern were discusses and Pakcik assured them of cooperation from Almanar. I never expected that very first meeting to last about three whole hours – without as much as enjoying a drink. But the three representatives were all very enthusiastic. I could understand that when I learnt, later, that they had had a meeting with their Chairman and had been given the full mandate for a change.

Just a few days after the meeting I have now been told that I can now expect the first busload of PERKAYA orphans as early as this weekend ! It is now Pakcik’s turn to organise and make available whatever is needed.

Insya Allah, a new and successful chapter will begin for Almanar.

Pakcik will follow this posting with another that gives some picture of what PERKAYA is.