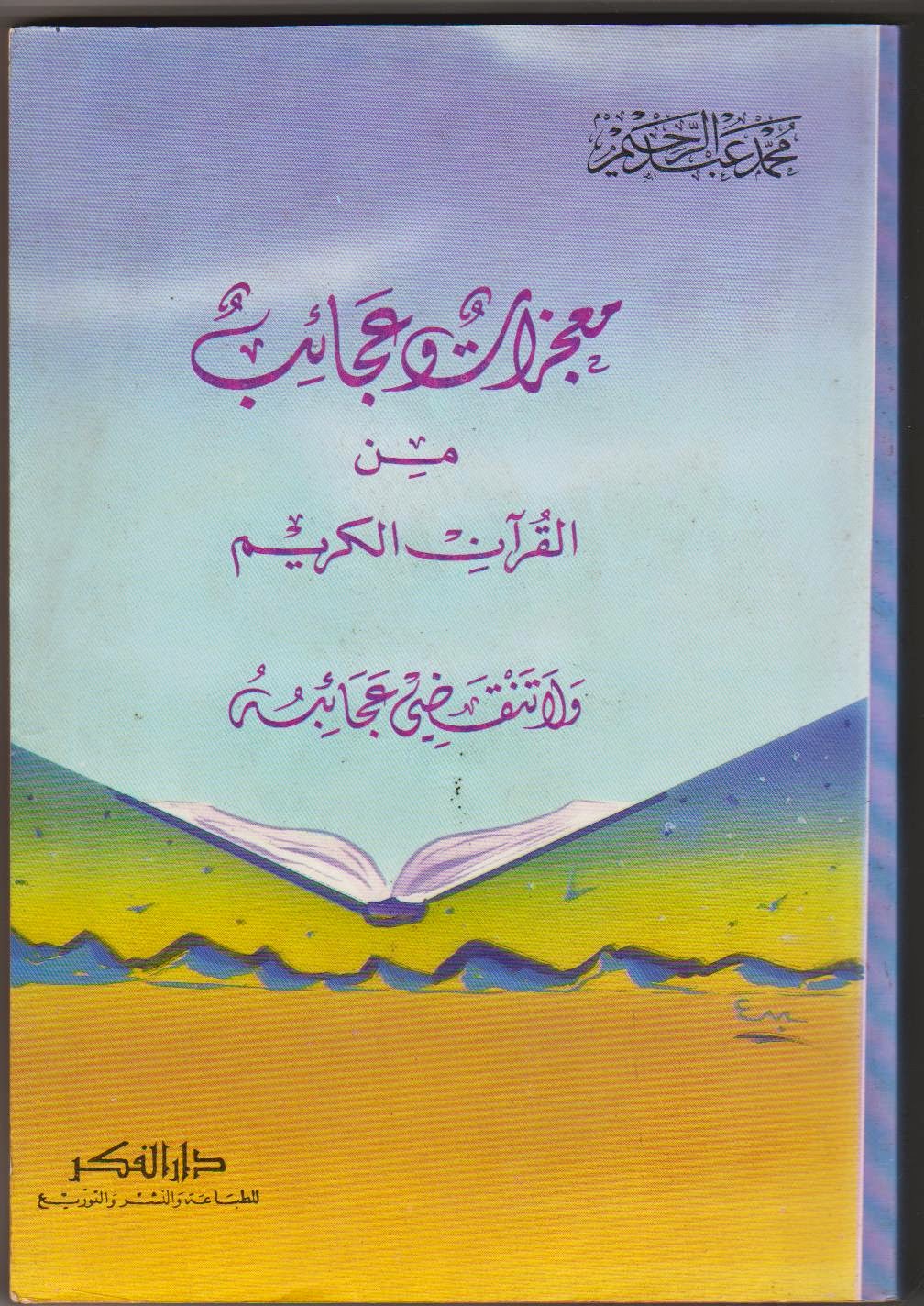 Then one new issue came after another, giving the impression that I have put aside what I started with. On the contrary, the subject is one of Pakcik’s favourites. I have to apologise to my visitors like Aziela who expressed interest in this subject.

Way back to mid 1970’s, an Egyptian living in America, made an astounding discovery which amazed the Islamic and non-Islamic alike. The man, Rashad Khalifa, born in Egypt in 1935,migrated to America at the age of 24 after obtaining his first degree. He then earned a Master’s degree in biochemistry in Arizona and, later, a PhD in California. It was in 1974 when Rashad Khalifa, using computer, made a sensational discovery of number 19, later known as the Code Nineteen of the Quran. An article on this subject found its way into the famed Scientific American magazine. One should appreciate that the earliest laptop computers only came into the market by mid 1980’s, but Rashad had used a computer ten years earlier to analyse AlQuran. 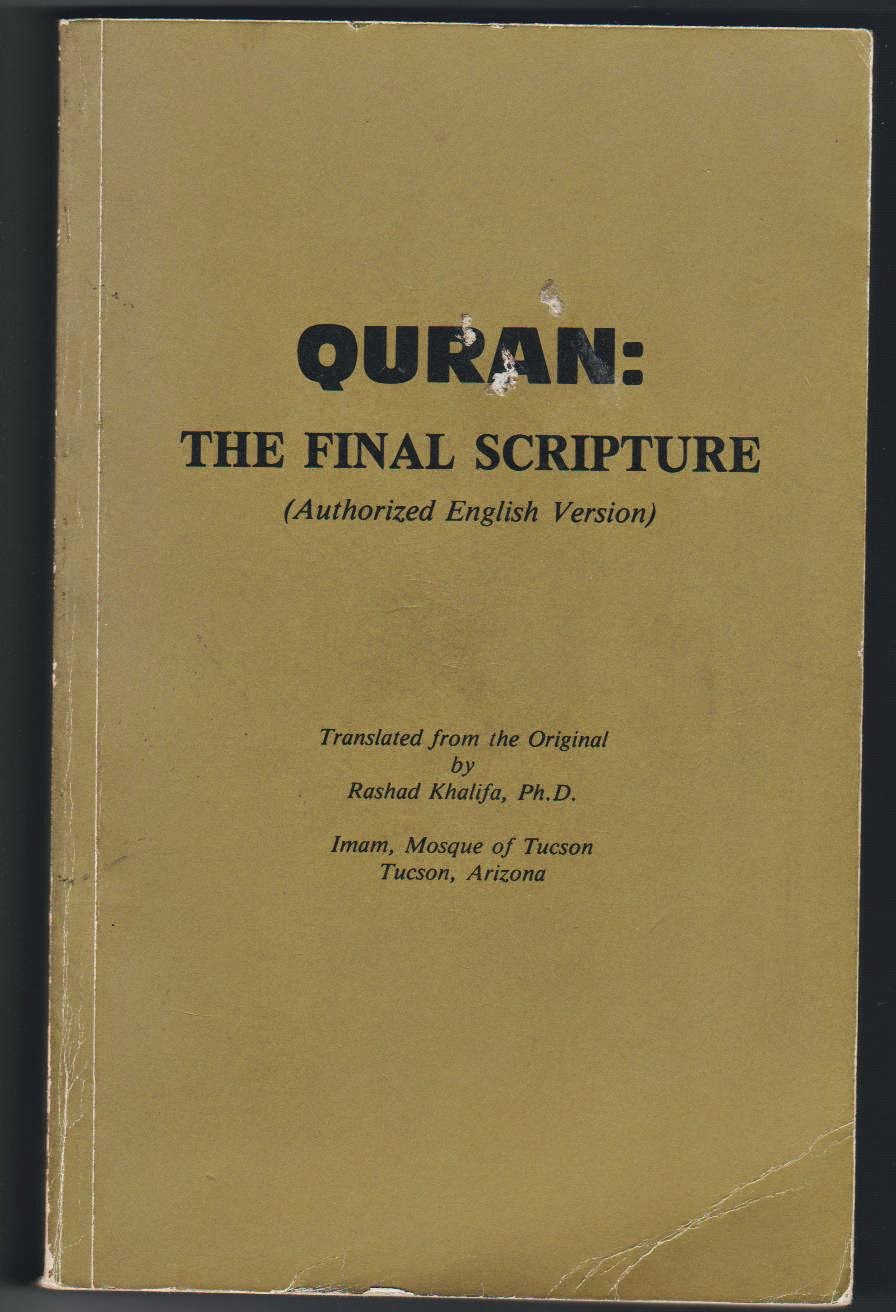 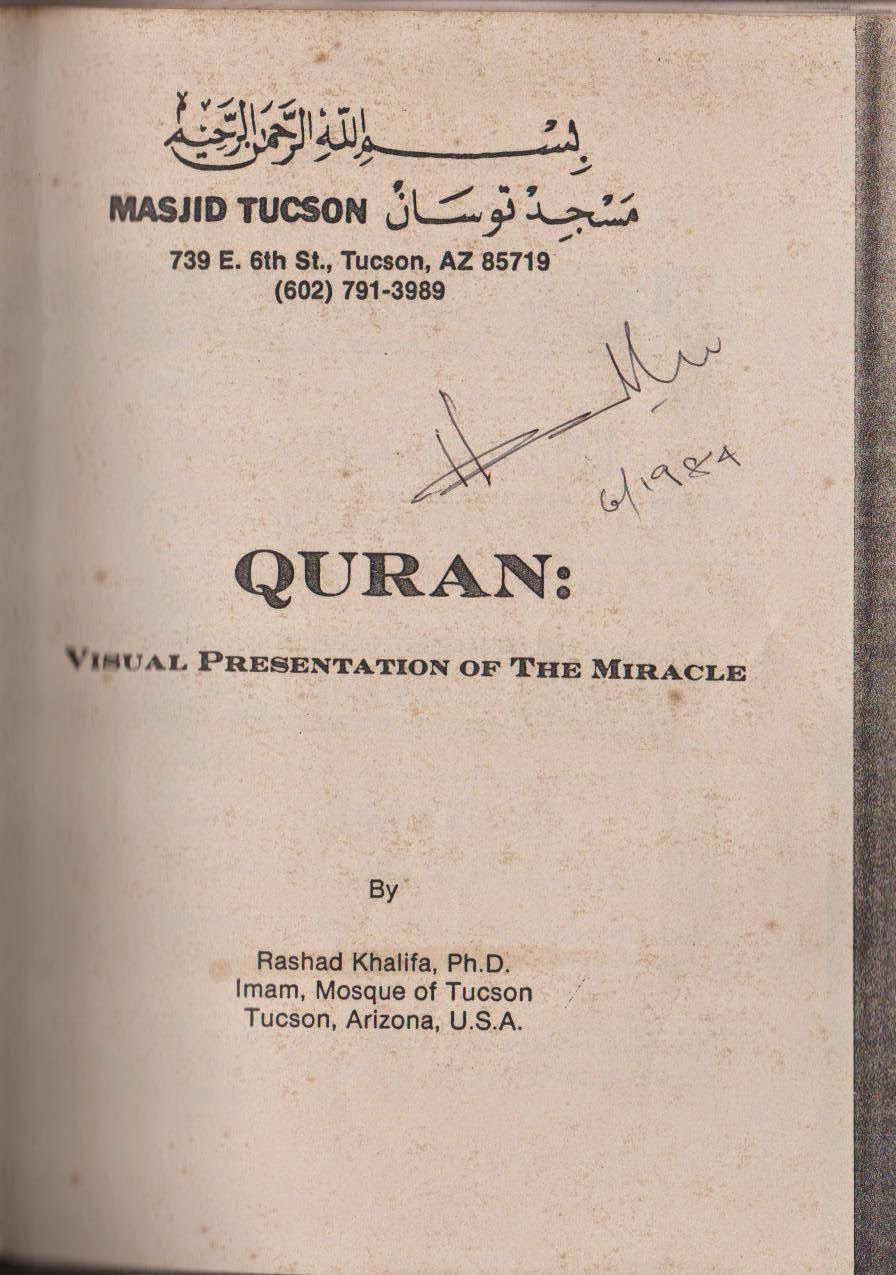 I came to hear of Rashad’s discovery towards the middle of 1980’s. Like many Muslims and non-Muslims world over, I was very fascinated by Rashad’s discovery. It did nothing but to strengthen my belief in the endless miracles of Al Quran.  I will not attempt to describe in any detail of the discovery related to number nineteen, which most of us already know, I am sure. To me this is a miracle and I would like it to be the first example in this series.

Here are just a few of the many aspects of the so-called code nineteen of AlQuran.

2)     The opening statement of Quran – Bismillah… consists of 19 letters. 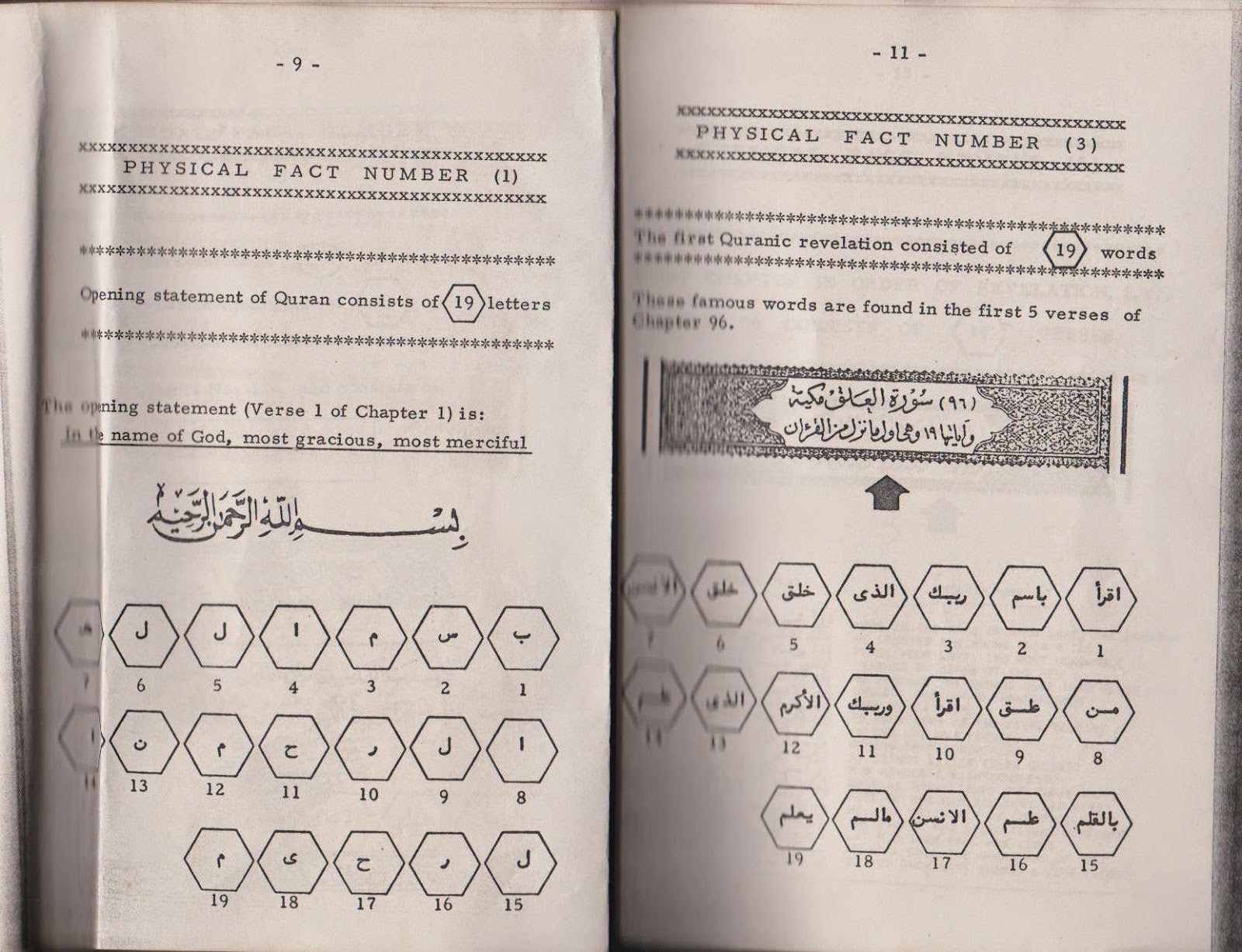 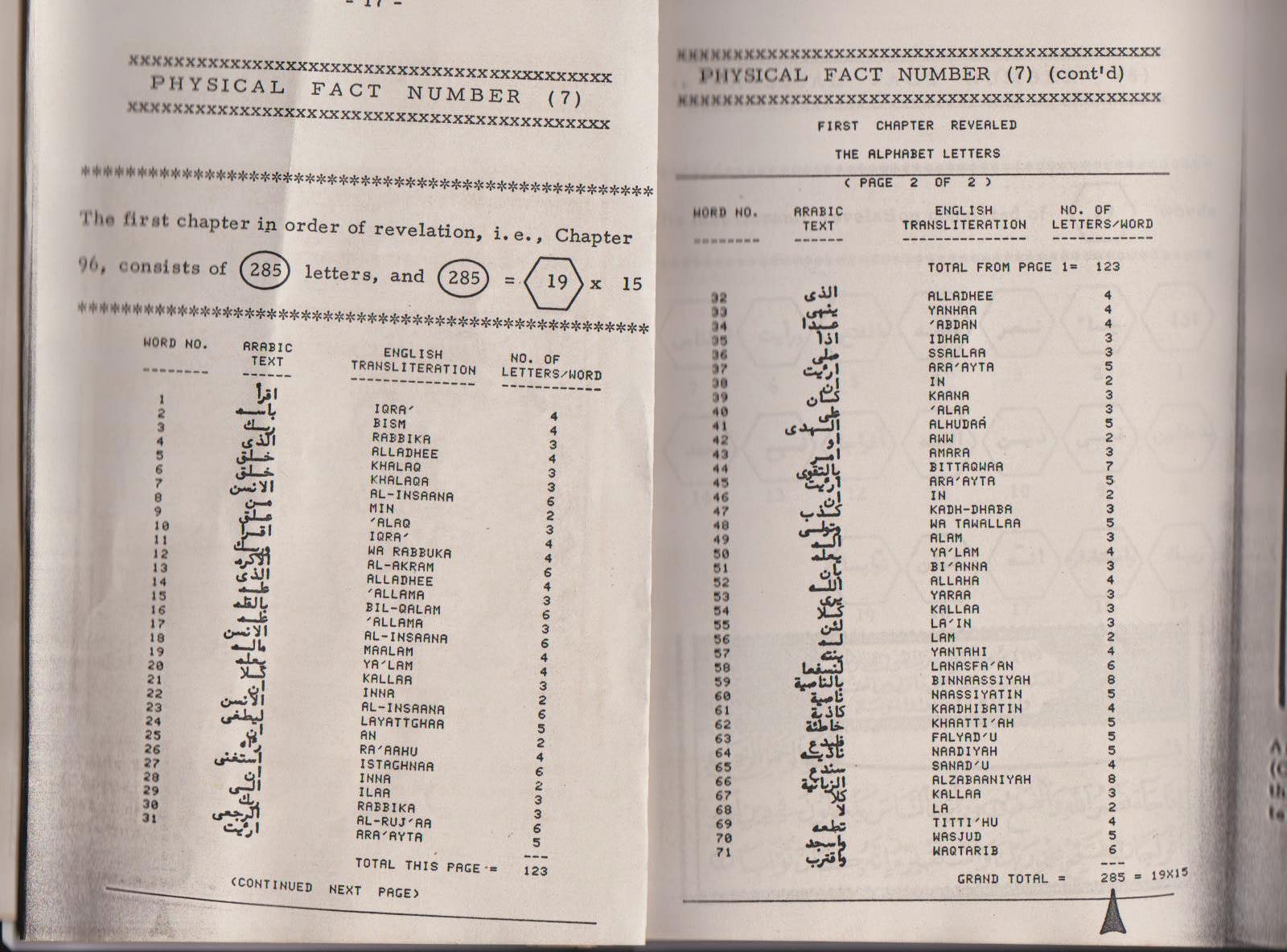 4)     Surah Al Baqarah begins with three letters Alif, Lam and Mim. The total occurrence of these three letters in this Surah is 9,899; that is 19 x 521 = 9899. This phenomena
occurs for all other Chapters (Surah) starting with letters , the likes of Sad;  Alif Lam Ra; Ya Sin etc.

Rashad became a popular hero, commanding full-house audiences as he lectured at universities, mosques, organizations and even royal and presidential palaces.  Rashad was inspired It was most unfortunate that, at the height of his popularity he began to have ideas that he was a divine messenger, not a prophet. This overshadowed the seriousness of his previous achievement, and undermined all the good that he had done.

Code Nineteen of AlQuran has become a controversial issue. Pakcik will not make a stand on this. Believing in numbers is against our basic faith in Allah.  To me it is not 19, as a number. But the Quran, apart from showing all the scientific marvels, shows that AlQuran is structured beyond the ability of any one but the God himself. The whole Book is bound by an uncanny structure and arrangement which, if a word is being altered, the change would show. It is like a kind of seal that one uses on an envelop to show that the document inside has not been tempered with. Likewise, Al Quran has been carefully sealed in a ‘nineteen ‘ manner to prove that after about 1400 years we now discover that the contents of the Book has never been tempered with, not even a letter, true to His assurance that He alone preserves it.

So I take code nineteen as a seal to assure ourselves of the sanctity of that Book, a miracle. It is not 19 as number to believe in. I regret that I am unable to post details of a number of very uncanny incidences in Mecca and Medinah during my Haj in mid 1980’s, involving the surah containing ( tis’ata asyara ).

Now we will mass-produce Ph D's for a song

Good news - how to save billions!

That came out last Sunday in the Star. A high-powered government spokesman said that “research universities which produced PhD had saved almost RM2 bil so far.” So why should we spend money sending our candidates to universities overseas?  When referred to the absence of Malaysian public universities in the prestigious Times Higher Education 100 Under 50 2014, the answer was, “Rankings do not mean everything ……”. Of course all such spokesmen talk about our universities as nothing less than ‘taraf antara bangsa’ ! But, sad to say, industries in Malaysia find our graduates badly lacking, resulting in increasing number of jobless graduates. Now our politicians are mass-producing Ph D holders to sell kacang puteh.

Living in Terengganu and seeing the marvel of this kotaraya dipersisiran pantai, I wonder why we started and still continue with the great ‘Monsoon Cup’ event every year. What does the annual expenditure of that few days’ event mean to our local fishermen when the weather is often too rough to go to sea to earn the few ringgits for their families?  I also question why we spent billions on building miniature mosques of the world – but none, I understand, qualifies to have Friday prayers? How I wish those beautiful islands in the picturesque large estuary of Terengganu River were to be the home of some medical specialists, with five-start medical centres and accommodations to become a unique centre for medical tourism; the way our small neighbour down south ( lacking spokesmen!) has been flourishing over the years without songs and gongs (or should I say song and dance?).

So we are now starting to produce locally Malaysian PhD ‘tab - taraf antara bangsa’ and save money. (But do we really need money? I understand 1Malaysia has plenty to hand out cash. ) I am not surprised a holder of our locally produced PhD, named Abu, will have the pride of writing on his business card :  Dr Abu bin Adam, PhD-tab.

Not having a PhD myself, I read what those clever spokesmen say, and I sit back heaving a long sigh, and tell myself I am not qualified to comment and am behind time. Only ‘katak dibawah tempurung’ does not need to see the outside world and get thrilled to hear whatever is sung is lauded without question.