TWELVE out of sixteen pupils (75%) are BOYS, and BOYS occupy the top seven positions with 7 A’s or more.

Please do no not say to Pakcik, “Tell it to the marines!”

Instead have a good look at what we have below:

These were the sixteen pupils who attended Almanar classes for three years from Form 1 to Form 3 (2005 to 2007).

No, Almanar cannot claim credit for the SPM results of these 16 pupils. If at all, these pupils can only be thankful to Almanar for giving them the help when they most needed in subjects like English, Maths and Science during the three years after their UPSR. Most of them, on registering at Almanar, had obtained 3A grades and below, except for a boy and a girl achieving 5A’s each and another boy with 4A’s. Nevertheless, not unlike many kampong children, they never lacked what is needed to succeed. Three years later, 10 of them (8 boys and 2 girls) gained 8A’s each in their PMR exam. Following that creditable performance, a number of them were offered places in better schools to continue with their Form 4 studies. Many continued to call at Almanar during the following two years. They treated Almanar, and still do, as a convenient place to meet, to compare notes or even to do their small group studies.

Of particular interest to Pakcik is how they performed in their SPM exam particularly in English, Modern Maths and Additional Maths. Putting aside all the sarcastic remarks and the harsh man-to-man talks with Pakcik, had these pupils continued to benefit from what they learnt at Almanar in these three subjects? I was anxious to know and now I know.

It is, therefore, so very fulfilling and gratifying to notice that ten out of the sixteen obtained A grade in English. All the sixteen passed their Modern Maths with A Grade. In Additional Maths, the more difficult mathematical subject, seven obtained A and another seven obtained B grade.
No. of pupils passed with Grades A, B & C


If number and academic performance of female pupils should favour girls as the accepted rule of thumb, the above figures certainly do not represent the national statistics for SPM achievers. Admittedly there is a twist to the whole situation, a disturbing story to tell.

It all began five years ago, soon after pupils had started their Form 1 class.

To cut the story short, Almanar had, as a matter of fact, more than 30 pupils initially when the form 1 tuition class began early 2005. The number of girls, indeed, exceeded boys. It was also true that the girls’ UPSR exam results were generally better. All was well and things started smoothly until the authority of the secondary school they were attending attempted to rectify a problem the school was facing. The school which could offer some boarding facility had not been able to attract enough number to fill the hostel beds. Very few parents were keen to allow their children to move in. For one thing the school was within easy reach of most houses. Many could idly cycle there and back. Some were sent to school on motor-cycles by brothers, sisters, mothers or whoever, and many others took school buses which collected reasonable fares. At the same time one must not underestimate the economic factors involved.

To the dismay of most parents, pupils in the top class of form 1 were put under pressure to go into hostel. Promises were made by the school authority of a hostel environment conducive to study, of good food and lots and lots of extra tuition classes etc. Quite typical, one parent moaned over his difficulty to make available the cash needed to pay for his daughter to join the hostel. One hundred ringgits may be pittance to many but not to some. Parents like this did not have the courage to speak up. PIBG meetings are almost always silent endorsement to what a school Principal wants to bulldoze.

Pakcik was against such a move by the school and voiced strongly to the parents of those who had already joined Almanar classes. Based on past records I knew it too well the academic records of children staying at the hostel were dismal to say the least. A number of parents, however, relented under pressure from the school. Many girls with good potential left Almanar to stay at the hostel. Sadly, many of them subsequently opted to leave their hostel life, disillusioned.

That was how, for once, Almanar had a group unnaturally tilted in number and good exam results towards male pupils.

By now all the 16 pupils have turned up at Pakcik’s home with ““Pakcik, what do you think I should do?” question. My answer invariably goes along the theme expressed in
Ukur baju dibadan sendiri

It is well and good to have high ambition and all. Many ‘pakar motivasi’, who often address themselves with Doktor ( PhD) Datuk and all, would expound their text-book theories the need to aim for the moon. I cannot not simply look at the faces of these children without reflecting on the reality that their parents are wondering what and when their children’s A’s would translate into dollars and cents for the family, and ease the pain and tiredness at the end of a hard day’s work. These children must fully realise that they cannot, years from now, make excuses:
“ Hajat hati nak peluk gunung. Apakan daya tangan tak sampai.”

A choice has to be tailored towards an assurance that he or she is able to take home dollars and cents at the end of the day, leaving aside the need to satisfy one’s ego of achievement. Pakcik will in due course explain why my way of thinking is more conservative with regard to higher education for many of these kampong children. It is hard for many in the urban areas to accept the reality that it is not altogether a level playing field despite the number of A’s scored. Many of them need to practice running up the small hills before attempting a snow-capped mountain. In all cases there must be rooms to improve themselves.

Pak Cik wrote in December last year (‘Whither Goest Thou?’) about three pupils, one boy and two girls, who performed well in their UPSR examination when the odds were against them. Their parents had resigned to the fact that as far as their children were concerned, irrespective of their achievement, they would continue their Form 1 studies at the nearest normal secondary schools. To them life is painful enough without having to gloat over an expensive dream.

Assured of sponsorship, however, and with persuasion from concerned teachers, the families relented. The teachers helped to apply for entry of the three good performers into the better known boarding schools. Today, Pak Cik am happy to report that the three musketeers have started life in a better environment. 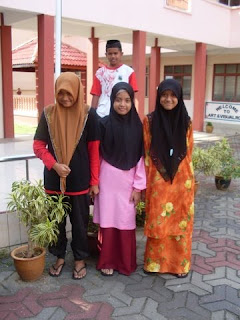 Three of these four are fortunate
The sole boy among the three is in a prestigious Sekolah Menengah Sains (Kuala Terengganu) and the two girls are in two MARA schools (MRSM Pasir Tumbuh and Besut). There they have begun their Form 1.

The boy is lucky to qualify for a special scheme whereby his parents are required to pay nothing from day one. All the initial fees on registration were waived, boarding and all.

The two girls, as expected, had to get things prepared and have a specific initial sums ready to be settled on registration. These were what the parents dreaded most, apart from the unknown requirements in the course of their children studying and living there.

The reactions of the families on receiving one thousand ringgits each from Almanar were beyond belief. The feel of that sum of hard cash in hand was probably a dream. An old friend of Pak Cik living more than one hundred kilometers away, one I had not seen and talked to for over three years, chose to ring me up a few evenings ago. He wanted to relate a story how he came across a man who was a total stranger to him. The man was proud to talk of his daughter going into MRSM and of a man who helped with an unexpectedly enormous sum!

That signals the start of Almanar sponsorship. What would be the on-going requirements and future commitments for these three children will have to be monitored. At this stage, there is no necessity to cry for any donation. It is gratifying for Pak Cik to know that out there, generous individuals are ready to chip in. Pak Cik will not hesitate to speak of the need when it comes.

For the moment let us hope the children will perform as they should for a better future. Their families can now, probably for the first time, afford to own a dream - that at the end of this long dark tunnel surely there is a glimmer of hope.

What about Pak Cik’s own two grandchildren who earned themselves a trip to Bandar ‘Cat’ after their UPSR? Well, they were adamant that they had no wish to leave their home environment. What they wanted most was to be with their respective elder brothers at the Victoria Institution, the day school in Kuala Lumpur. So we save money. 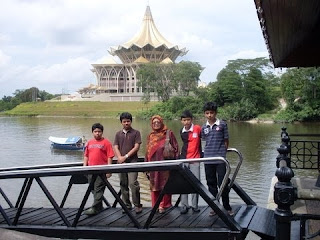