THE MIRACLES OF AL-QURAN 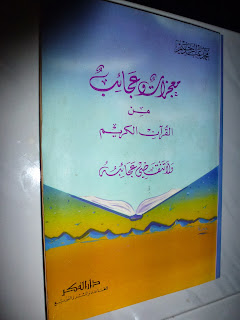 I looked back into my 1956 diary to be sure of his name, Ghazi Aziz, from Iraq. Sharing the same room with him was a white South African, a Christian, and another, a Jewish. Sharing an adjacent roam with me were two boys, a Budhist from India and a Christian from Chile (South America). The third one, a small single room, was occupied by an Irish. It was as international it could be in a three-room ‘digs’ run by a Scottish lady. That made eight nationalities from four continents, representing four major religions.

Thrown into that rare environment I, an absolute green-horn at 20, was obliged to learn to respect each other’s race and religion.

During the following months I grew quite close to the Arab boy from Iraq. We often sat talking about our countries, people and so on. In the course of our conversation one day, I told him that, being a Muslim, I knew a bit of Arabic, the language of Quran that we all had to learn to read in Malaya (pre-merdeka). I was not at all surprised when he took out a copy of Quran and started to talk with high praise of the language of Quran, .."the best example of Arabic language" so he said. That I was not least surprised. Then he dropped the bombshell, “ I have to admit so. although I am not a Muslim.”!

How was I to know that an Arab, bearing that name, Ghazi aziz, was not a Muslim? That’s how green I was. I wonder if I managed to hide my shock.

Since that day no book would surprise me if it says the language of Quran is one of the miracles of Quran. After all Muhammad (saw) was an ‘ummi’, an illiterate person. How could he, of all people, claim the Book to be his work even if he wanted or tried to? There, in that strange environment I learnt of the first ‘Mukjizat’ (miracle)of Quran; it being too perfect to be of human creation.

Part of Ayat 23 from Surah Al-Baqarah

Interpretation by Muhammad Asad: "And if you doubt any part of what We have bestowed from on high, step by step, upon Our servant(Muhammad), then produce a surah of similar merit, and call upon any other than God to bear witness for you – if what you say is true!"

That is my introduction to this new series. With humility I must, from this very first stage, declare that I will only do the work of compiling the facts from other sources; delivering an original thought is beyond my human capability.

Dear Pakcik,
I see this from 2 aspects, 1)your ready mingling with others of different creeds 2) your noble intentions of subsequent writings to involve or be guided by the Al-Quran. There'll be lots of aspects of education and educating oneself. Certainly will be looking forward to both.

Dear Pakcik,
I am most happy to hear this as there is no other miracle or "Mukjizat" bestowed on our Prophet Muhammad (PBUH) that is revealed to all mankind other than the Al-Quran. Subhanallah.

We live and learn. Our past tells us what has not been correct. The question is whether we are willing to say we could have done better. That is the way you have turned yourself pprofessional at poetry. And here I am saying I can never do it. Of course I cannot and must face reality that we cannot be good at everything.

That Book of guidance is alive and is meant for eveyone of us, a Book of miracles. All the best to you.

As salam Pakcik. I am already for your next entry.

Dear Pakcik Al-Manar, hope you are fine as always. Keeping a diary from 1956 is a very rare occasion and big achievement by itself. Congratulation sir!!

The best book ever is always Al-Qur'an. It's a living Mukjizat for us to study and explore forever. But the sad part is a big majority of 'so called Muslim' choose to just ignore it. No wonder even though we are so proud with big numbers of Muslim in the world (currently about 1.62 Billion) but in term of quality we are nowhere to be proud off. Looking forward to read your noble intentions to share with us the mukjizat and beauty of Al-Qur'an as Kalamullah. Jazakallah.

By the way sir, I would like to recommend you to watch a movie called "Ustaz Mu Tunggu Aku Datang" (UMTAD). It will be fun and pack with valuable messages. The full movie easily available in the internet nowadays.

Waalaikum Salaam
It is good to hear that I would not be writing this series for nothing. But I cannot promise an immediate entry as I usually take my time to think what is appropriate.
Thank you, Aziela.

Achool of Tots,
From your entries I have often read I realise you have certain inclination towards religious-related issues. I share whole-heartedly the sentiment you expressed above. It is a sad situation indeed but who are we to correct it except to do our bits?

Thank you for sharing with me and my visitors what you have read recently.
I welcome your comments.