The front page of the New Sunday Times dated August 2nd 2009 has the following to say:

"Men in the classroom face extinction in 20 years – going the way of the dinosaur ….

That was what the vice-chancellor of UPSI said….. 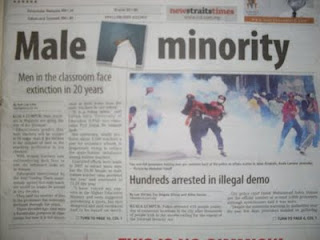 What a bleak picture has been painted for male chauvinism! Can Pak Cik help to defend it? Well, I have some data of sort. Let us have a look at it.

For a start, being where I am now in age, I would be exceptionally lucky to see the extinction of male teachers 20 years from now unless Pak Cik can improve on that figure to make it sooner.

In the case of UPSI, comparison is made between the total of new intakes in one year with that of the following year. Pak Cik will, on the other hand, will take one group of pupils joining Almanar early in 2008 and see how this group grows smaller in size a year later, a measure of their perseverance.

Early last year 45 pupils enrolled into form 1 at Almanar. There were 15 boys among them, giving a delightful ratio of 3:1 for females to males, slightly better than 70:30 of UPSI. Today, 20 months later, the number has shrunk to just 20, leaving only 3 boys in that group. The ratio now becomes 17:3 which is approximated to 82:18. More girls outlast boys. 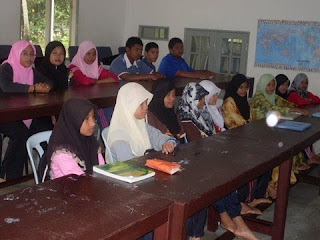 The reduction in number is due to a number of reasons. Some choose to leave Almanar, having found out that it is not all fun here. Some find it too taxing to meet the expectation of Almanar. There are some who are dismissed for regarding the free-of-charge Almanar class as a place for a social get together. Pak Cik have done everything humanly possible to motivate and retain boys (and girls, too, no doubt). But I cannot tolerate ‘cancerous’ cells that can damage the rest.

Hence, the male percentage of intakes at UPSI reduces from 30 to 28.

At Almanar the perseverance figure of male pupils reduces from 30 to 18.

Pak Cik am sorry to see this. But that is a reality, more girls moving ahead. To comfort myself Pakcik must ask myself the question, ‘so what is wrong having all females in education?’ After all, if females are the ones who conceive, deliver, and rock the cradles, they are ‘natural’ at educating children. QED.

During a light moment in class recently Pak Chik quipped to the boys that they had better be prepared to take up diplomas in cookery or fashion design. We have chef Wan and Choo the shoe-maker. Leave all the mind-boggling jobs to the girls. And the girls, Pak Chik assured them that their future was assured. There would be enough husbands to look after babies, do the house-chores and all! There would be ample male ‘maids’ as well, cheap and robust. My Mak Cik at home laughed when I related the scene in class. At Almanar we have a fantastic ratio of 0:100, nil female teachers! How about that for male chauvinism?

The role of male teachers in early childhood education can be examined from many perspectives, including the need for male teachers, advantages and disadvantages of being a male in the profession, or why there are not more of them. In order to find out what male teachers think about teaching at the early childhood level, a survey consisting of 26 multiple choice and objective questions probing these 3 areas was completed by 20 male educators. Results showed that most reported working in the field because they love working with children. There was no real consensus on whether the image male teachers present is different from that presented by women, but the majority felt they projected a gentle and fatherly image. Nearly all agreed that teachers could be just as, or even more, influential than a child's parents, but for different reasons. Half felt that a teacher's gender has no effect on how much a child learns; about 25 percent said gender was not an issue in their role as early childhood educators, while 25 percent said there were certain trust issues raised because of gender. Forty-five percent agreed that neither males nor females have particular advantages in the field of early childhood education, and 35 percent said that as a male teacher, parents are the hardest to "win over." Eighty percent said students do not treat males differently. Sixty percent felt the gender ratio of teachers should be equal.

When asked what can be done to encourage more men to enter the field, 45 percent said to offer more money.

Cik gu Wahab,
People in your position, having devoted a life long career in education, can sit back and analyse findings of various surveys of which many of us are not aware of. Thank you for sharing some of these with us. I am pleased to see the acceptance of male teachers as possessing the ‘gentle and fatherly image’. It does seem preferable that there is some form of balance between male and female teachers. That ‘offer more money’ incentive bothers me Cikgu.

you're right pak cik....in reality more girls are moving ahead not only in the field of education, but also in other fields as well.....
Nur Azira

Pakcik
Well. it's true. in my class, there are only 6 males compared with 19 females trainee teachers. During my internship at schools, I hardly found a male teacher. Where have they all gone to?
Nad Nadyrah

With the worsening H1N1 we need you to complete your pharmacy course quickly to help out.

Like the last time, this year's SPM pupils doing group study at Almanar need your valuable help with Biology in particular. You know how good I am at this. Furthermore I have had my hands full.

Pakcik...
Today I had a sharing session on our past experiences in school with our respected teachers.
I shared mine...and most of the good ones included you. All my classmates and my lecturer seemed to be so interested with all your good deeds. I gave them your blog link in order to have better sight of Al-Manar on their own.
My lecturer simply regarded you as another "Al-Bukhari" in this modern era and she even asked whether we could organize a trip to Al-Manar.
I hope they will pay a visit and put their own comments in this blog. There is nothing more than this that I could do to show my great acknowledgement of what you did for me.
-Mimah

Ramli
Hope all is slowly coming back to normal. It has been a trying period for you, I can fully understand. Let us face the future.
Selamat berpuasa
Pakcik