It’s not for you

Looking straight into my eyes Ramli, the group leader said, “It’s not for you ……” In his right hand was a thick roll of crisp one-hundred and fifty ringgit banknotes.
The group of six tough cyclists from Bukit Jelutung, headed by Ramli (of When Less Is More), arrived at Nuri’s gate at about a quarter past six. They had leisurely spent about ten hours on to get here from Dungun. Indeed they had had their meals and rests on the way, but for the life of me I could never have done the journey. How I envy the joy of their ride. See BCJJ GOES EAST COAST - DAY 1 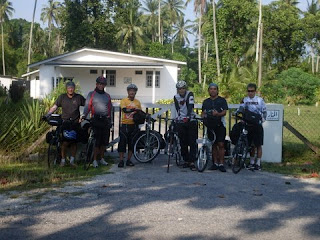 I had known Ramli for some time but not the rest of his great gang, hefty ‘young’ men of various professions. In this rural backwater it is a rare treat and so refreshing to be sitting with people with different backgrounds. It was rather unfortunate that my ‘mak cik’ was away in Kuala Lumpur occupied with her (mine, too, of course!) children and grandchildren. I was the host of the house and all. I could not very well prepare a dinner for these visitors beyond rice, boiled eggs and omelets. So I took them to a kampong restaurant. Fortunately they seemed to enjoy whatever was left of the food. But that was not all. Before they left the following morning the great Pak Cik had two platefuls of keropok lekor fried for them. I did it all my way.

How I wished they would stay longer. But their schedule was such that they had to leave early en route to Kuala Besut and thence to Kota Bharu. We shook hands bidding farewell and selamat jalan. It was then Ramli, the leader, surprised me with his ‘handshake’. 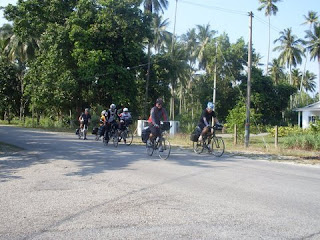 “It’s not for you. This is our contribution to Almanar.” Taken off guard, how else could I response other than a feeble ‘Thank you’?

As I celebrate my 59 years young tomorrow, thank you for stating the fact that we were the young cyclists from Bkt Jelutung.

Dear Pak Cik, it was such a small contribution from the SIX of us, whereas YOU alone has contributed so much more to the children at AL-MANAR.

We thoroughly enjoyed the first class treatment and hospitality and wished we could stay longer. Hopefully, we will meet again.

Terima-kasih Pak Chik for your kind hospitality. Though the visit was like a whirl-wind, the warmth and lesson learned will be treasured. You helped re-inforced in me the believe that there are still a few good men in this world. So when I do grow up, I wanna be like you.
I shall return!

Many happy returns of the day, arz. If I were as young as arz I would take you three, PLUS the other three, on at a marathon race!

Do visit us (not just me) again.

To my surprise,Razak and Sham Boe was your weekend guest.
They were dear friends of yester days,esp.Sham Boe during the London days.Am happy for the group,keeping fit and doing for a good cause as well.Havent met them for years.
Probably,one of these days would drop by to look up at your place,Pak Chik.

So Pak Tuo, Razak and Sham Boe are no strangers among yourselves? It is either the world has gone smaller over the years or the men have gone emminently larger in stature and position.