Two children ago, Yani was the subject of my End of the tunnel (Pt 5). Yes, that was what I said, two ‘children’ ago, covering a period of about two years. Yesterday Makcik and Pakcik met her again at a wedding of her old classmate, Zira. Yani ‘baru lepas pantang’ ( a 44- day period of detention indoor after delivery? ).
Almost seventeen years ago Yani and Zira, two timid kampong girls, joined the form 1 tuition class at Almanar. Yani has been working with a private college in Selangor and she delivered her second child one-and-a half months ago. And yesterday, after Yani’s second child, Zira was married. Today the two are no longer girls, nor timid any more.
----------------------

Zira, all the years I had known her, used to live just a couple of kilometers away from us; but the family moved to a new home about a year ago. “Please come to visit our new place, especially during a fruit season,” said Zira to us a couple of times. Somehow we never made it there until her wedding day, yesterday; and that was not without some difficulty.The new house cannot be more than about 30 kilometers away from us; but such a distance from the coast line of Terengganu can take us to some uninhabited and very deserted areas indeed.
Guided by a sketch we reached the vicinity of Zira’s house in under thirty minutes. But we took another half-an-hour getting ourselves lost, driving up and down, stopping here and there seeking directions. As we were in the midst of it, my handphone rang. It was none other than the bride herself. In a tone tinged with disappointment she asked, “ Pakcik, aren’t you coming to my wedding?’ No, I would not miss her wedding for the entire world. And I realised then what our absence would mean to her, this very special girl.
------------------
Towards the end of our search, very certain of where we were heading for, we found ourselves driving along a road running through what looked like a virgin jungle. We were told that only a lone Felcra office was at the very dead end. Then somewhat relieved we began to notice some vehicles parked on both sides of the road. We knew for sure we had finally reached our destination. After parking our car at the end of the row we took a foot-path leading to a clearing in the middle of nowhere, a two-acre piece of land with coconut palms, assorted fruit trees and trees of all sorts – and perhaps animals of all sort, too, lurking around! 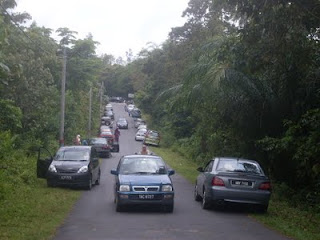 A road to nowhere 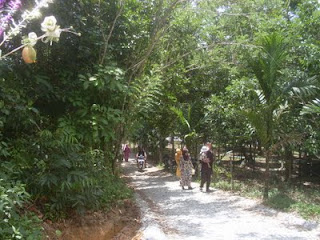 The path into nowhere 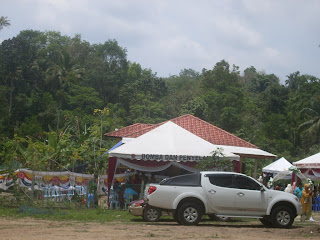 Somehow the wild surroundings looked beautiful to me. In this wild but peaceful environment I could imagine myself reminiscing, perhaps with greater details and clarity. Poets and writers would surely find their ‘enlightenment’ and inspiration in this sort of place.

So it was Zira’s wedding. How radiantly happy she was seeing us around after all. 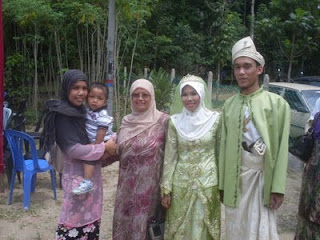 So what is so special about Zira that deserves a place in this End-of-the-tunnel episode?
She took the less traveled road.

I had no hesitation to tell her newly wed husband, “You are a very, very lucky person. Look after her as well as you can.” And I meant every word of it. And my Zira smiled and looked straight at me with eyes brimming with tears.

.. and my eyes brimming.. after reading the whole post.
I guess.. happiness is made of these mercies..
Psst... your journey to Zira's wedding reminds me of my first trip to Nuri ;)).

Pak Cik..
I can understand if Zira's eyes brimmed with tears.. for my eyes well with tears too reading your last few lines "..look after her as well as you can"..

What a heart-warming post. Glad that you could make it to Zira's wedding.
Have you received the photocopies?

One day you will have to say this to your SIL. Tears come naturally when what you utter come from your heart.

Thank you for your help

Dear Pak Cik,
It's a relief must be that you made it to Zira's wedding. Nowadays, likewise I would make every effort to be present for a wedding invitation. There ought to be a special emotional reason we get that invitation over others. I told myself I would not miss one for all the world for being the chosen few. Of course the tears of joy would naturally follow upon having successfully arrived at the destination.
Salam
Hank

School holidays is a wedding season. Sometimes it is hard hard work to oblige every one.

By the way I still look forwards to reading non-poetry work from you.

Hpe all is well and salaam

Dear Pak Cik,
Your references to photos of yester-years set me thinking. I've a collection of coloured slides and prints which are as yet to be converted into CDs. I thought why not take a few, representative of the occasions and write a pictorial essay of sorts. My cucus can just 'leaf through' and know what their gramps and parents did before. I've started with Niagara Falls at 'birdhouse' swiftletz.blogspot.com yesterday. I'll only have prose here ( the poetry stays at 'rainbow')
Thanks and Salam
Hank

I loved Niagara Falls. Saw it the very first time on my 18th birthday.

Sorry, I am sort of burnt out. So most of the time I just read through. But this story of the road less travelled called out to me.

Looking forward to the continuation, Pakcik....

I have seen your posting of Niagara, makin me like being there. Perhaps there is certain amount of envy in me know that you and Ninoaziz have been to a world wonder that I have not visited.

A couple of visitors to your blog left, what I feel, 'strange' remarks on your Nigara. I hope you will not be deterred from carrying with your 'prose' which I enjoy better.

Dear Ninotaziz, ( and p/s to Hank)

I know you have working under pressure to complete your assignments. Take a breather, young girl.

As I said to Hank above. Niagara is a place, among many places on earth, I have failed to visit; and to think that you were there as early as o your 18th birthday.

This morning I had a visit from that lovely lady ZENDRA and her husband for the first time. I forgot to tell Hank that this evening Kak Salmah and I will be having dinner with Pak Idrus and wife. That will by our first as well. Can I expect another couple of 'firsts' in due course?