The day was Sunday 15th May, 2011, and the time was almost 11.00 pm. Earlier I had put down my autographed copy of AMOT and I was beginning to get absorbed in the second chapter of ‘A Doctor in the House’. 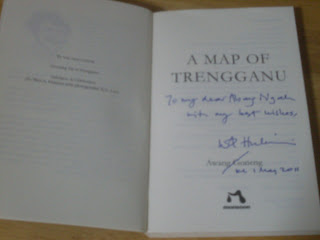 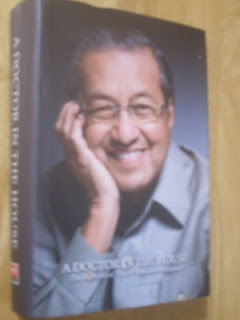 “Abang, come and watch this old film with me.”
I stopped reading to ask what film that was - on TV2.

Not for one moment I hesitated to put down my book to watch this film for the umpteenth time, our favourite. We first saw the film way back in 1967, 45 years ago, in a town named JESSELTON, the capital of the state Negeri Di Bawah Bayu. We had not long been married with only our two-year old daughter with us. I was sent to serve in ‘Borneo’ for about four years, almost the whole of the early years of our married life. Away from the rest our respective families we had a chance to build our own life without interference, casting the marital love the way we would want it to take shape. It was then Sidney Poitier’s ‘To Sir, with Love’, with Lulu singing the hit song, was first screened.

It was not just the very touching story and the beautiful lyrics but the very title itself evoked so much memory of our family life, blessed with love and affection.

Those schoolgirl days, of telling tales and biting nails are gone,
But in my mind,
I know they will still live on and on,
But how do you thank someone, who has taken you from crayons to perfume?
It isn't easy, but I'll try,

If you wanted the sky I would write across the sky in letters,
That would soar a thousand feet high,
To Sir, with Love

The time has come,
For closing books and long last looks must end,
And as I leave,
I know that I am leaving my best friend,
A friend who taught me right from wrong,
And weak from strong,
That's a lot to learn,
What, what can I give you in return?

If you wanted the moon I would try to make a start,
But I, would rather you let me give my heart,
To Sir, with Love

The film ended this morning, 16th May, at 1.00 a.m. Before my tears ran dry I decided to write this, because I thought it was not inappropriate to have this posted on the Teachers’ Day. To Sir, With Love is forever to me a beautiful song and a beautiful film that tells about a teacher.

Here is a video of Pakcik's grandson's UPSR ceremony held a few years ago . It was his last day in the primary school. The video : Convocation 2007 ( To Sir, With Love in the background)

Watched the film in shool hall in Tanjong Malim.. I was teased by seniors and peers alike for I have teary eyes and all.
Teaching vocation.. it is one of the road that I did not take even though I studied to be one for 4 full years..

"After all, in our own ways, we are all teachers in our lives."

Aaahhh … now I know why I always have a soft spot for this song. I’ve been listening to it since I was two! Coincidentally, I put together a video when Aziz left his primary school, … and guess what was the song I chose :) The film & song also bring back memories & tears to the eyes. Another song dedicated to Babah on this Teacher’s day ( at the end of Aziz’s video) – “Kau Ilham Ku”

With lots of love,
Pakcik’s No.1

Masih ingat ya. A naughty girl you were some fifteen years ago; and to think you have now built a family of your own!

Don't you think you have today reached a destination most suitable for you? I know how fortunate you are as a family today, and you have been a good 'teacher' nonetheless.

You are very kind.

A kind of telepathy that is. Mami and babah are pleased that you chose to have Aziz's last day at the shool on video with that sentimental song in the background.

Don't you have your own teacher? Who then taught you how to steal ikang panggang?

Dearest Abang Hassan,
Alhamdulillah..
Allah has inHis way led me to a vocation that I have enjoyed doing.. and would not mind doing it for another umpteen years.. and get good pay for it too ;)).
but like you I wonder about the road not taken... cos I think it might be more fulfilling.. non?!

I love this movie very much.
Happy Teachers' Day to you, Pakcik. I'm sure your AlManar kids are very excited today.

If you are happy now that's what matters.We all can be gateful.
Abang Hassan

I am sure a full time teacher like you must be really busy these few days.

Thank you for the good notes you posted. Tell me if I can be of any help in any way.

Dear Pak Cik,
What I appreciate most of TSWL that left a lasting imprint in my mind was SP's reaction. He was under tremendous pressure from Lulu and gang but he kept his cool. He was constantly provoked, his patience tested but he didn't let his emotions get over him. A learning point useful for teachers to follow.
Salam
Hank

Thank you for droping at my blog house.

I am not a kirkbyite......but I was accepted as a member of the alumni......firstly because I wrote a number of articles in their newsletter.......secondly I am a friend of many kirbyites......

A truly good film based on a good book reflects various facets one of which may interest us. Kak Ezza above, for example, sees it from one viewpoint and you see it differently. The end result is a more lasting impression on viewers.

Do you know I have difficulty spelling NS in full? My knowledge in literature is bad. I had to google to know that the second term is the title of a famous book by a famous Malay writer! It is a shame, isn't it?

Your response explains wuite quite a lot to me. I am not a Kerbyite either; but, by association, has been close to quite a few of them, particularly among the first couple of batches. Sadly a few have passed away.

If you care to email me on (almanar@pd.jaring.my) I would go into a bit more details on who and who. It is likely that we have a few friends in common.

Teaching was one of the roads not taken by me. I was chosen for teacher training in 1959 but since it was for only at the Language Institute in KL I rejected it as I was aiming for training in England (Kirkby or Brinsford Lodge).

Anyway I am happy that I was Quran teacher to my children and cucus ...

Kesana dan kesini dalam minggu ini dan yang lalu dan terlintas ingatan perihal Hari Guru, hanya mengetahui gaji guru kini telah meningkat hampir sama dengan gaji SU Kerajaan 15 tahun lalu.Pada 14 Mei 2011 attended AGM of Kirkby Alumni at Cyberjaya. Believe me a College at Cyberjaya has been named Kirkby International College a tribute to the old Kirkby. Wait soon film negara will screen a documentary of Kirkby College. We had a preview then. By the way N Seregenge is a friend of mine, from SIK the home town of Sdr Shahnon Ahmad and Seregenge appears in his novel Ranjau Sepanjang Jalan.Both of them are in the same kampong. P.S now reading Map of Terengganu Ha Ha.

I know you are more than just a Quran teacher to your cucus. The road you have taken has literally taken you all over the world. That probably would not have happened had you taken the road you wished but not granted.

Thank you for the information given. Somehow I have a very special feeling towards Kirkby without being a student there. I am sure to write something on Kirkby one of these days.

In particular I am glad to have come to be acquainted, though through cyberworld, with you and Nginap S. To both of you I hope one day, whenever you make a trip to my part of the world, you make it a point to call on us, be our house guests.

Salam to my beloved Pak Cik Hassan,
SELAMAT HARI GURU KUTUJUKAN UNTUKMU
You are such a great teacher,father,friend and motivator to all of Al-Manar and ex Al-Manar students.Thank you so much for every single thing you have done for us!
We ♥ you.

Fadilah posted on your Wall.

You will never understand how much pleasure I have had with you all, playing a part in my life. And I wish to know how you are all, and pray that all is well with you and families. Do drop by Nuri.

You are spot on Pakcik. In my younger days I travelled the world swinging my golf clubs. Now in my golden years I plan to
look see historical muslim countries inshaallah. This June holidays will be travelling with a largish group of weekend arabic madrasah students mostly in the same age group for a swing through Morocco with our ustaz a true blue Moroccan. We are warned to speak arabic only for immersion.

Isn't life wonderful, sometimes roads not taken can be a blessing in disguise, Allah knows and plans the best for us !!!

salam pakcik,
i hope i'm not too late in wishing you 'selamat hari guru' may you open more doors for the young ones!

Enjoy all this while it lasts

You deserve it all more than me.

Only this morning got to open this post. I was and still am a teacher and not ashamed to say that tears still 'menakung' di mata when I opened and watched the video about the Year Sixes leaving their 'innocent' primary school years. Added to that the haunting voice of Lulu in the background. BTW I too stayed up to watch Sidney Poiter that night - for the upteenth time.