Two Weddings of the year

Within the first ten days of this month, January 2014, the two of us had to shuttle twice between KT and KL. Of course, as usual, we did it all in our old jalopy. The trips were important as we could not possibly miss the weddings of two persons fondly considered as part of our family.

( i ) One wedding we could not miss

Months ago we were forewarned of a wedding which, had we not been invited, we would have gate-crashed to be there! It was the wedding of the first grand-daughter in that special family; a family that Pakcik chose to post about on 25th Feb last year (Click‘A very special family’)

Three decades does not seem that long when we flip a memory page. It is still there, the time when the mother of the bride was just a teenager, the first child of a senior government officer. We were pleasantly surprised that the girl was given permission by her parents to join us on a holiday abroad. That was the sort of trust we gracefully accepted. 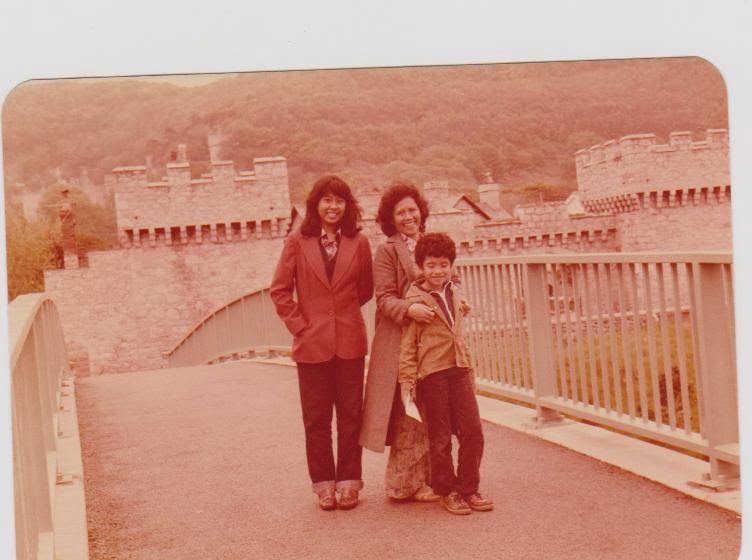 Three decades ago - a school girl

And today that school girl is a specialist,a Datin Professor and a proud mother of a bride. 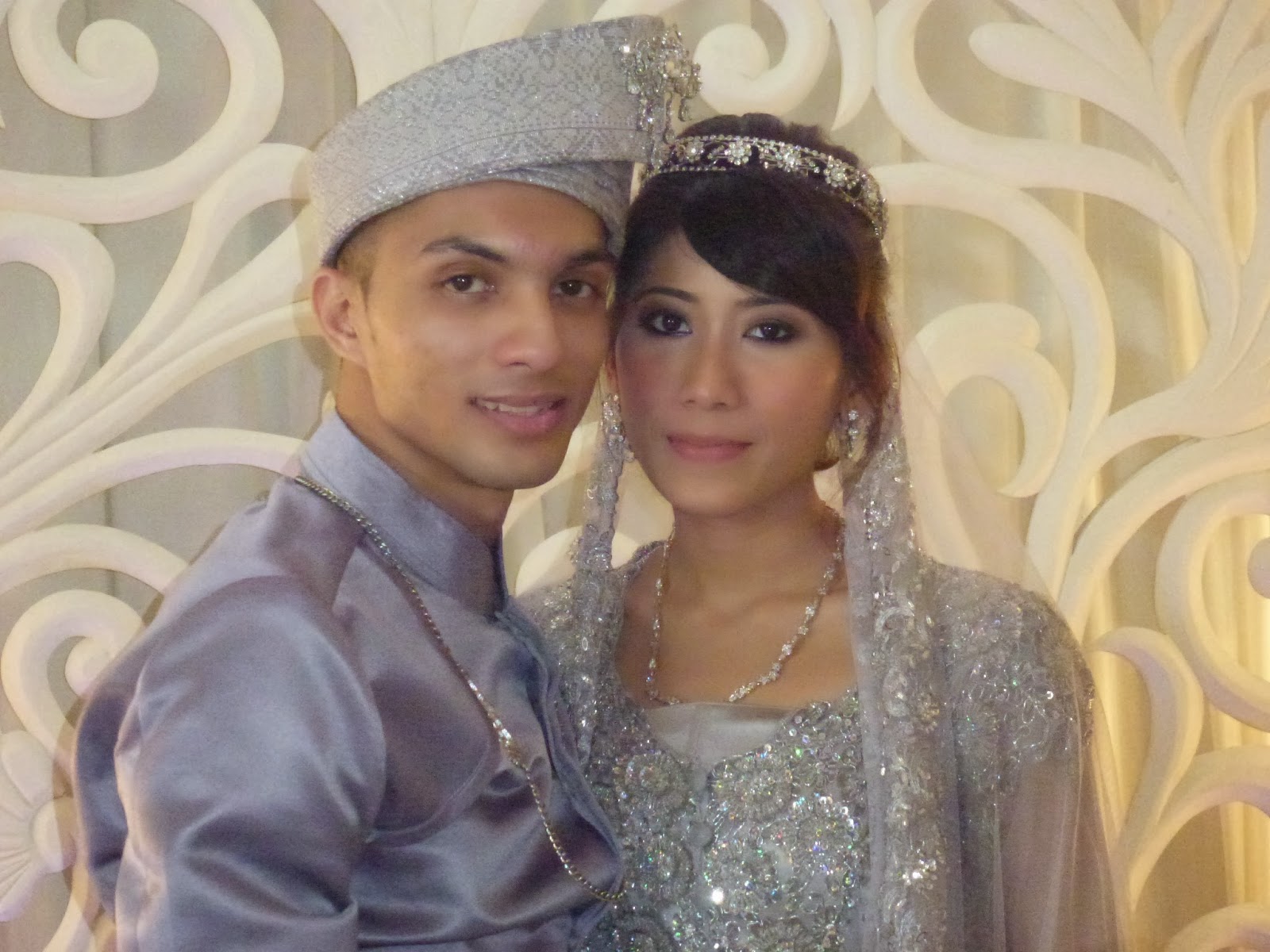 Today - Her daughter is a bride

That is what a period of three decades has done to our life; at least in age, growth and stature. The two of us cannot help being envious that  ( insya Allah ) by the turn of the year 2014 the parents of the new bride would be grandparents and, naturally  their parents would be proud great-grandparents for the first time – beating the two of us to that coveted title.

( ii )  Another wedding we could not miss

And also about three decades ago, our first two children joined two boarding schools lying side by side in Cheras, less than half-an-hour’s drive from our home then. Living and socialising during their subsequent years gave these two children the opportunity to acquire a circle of very close friends. It was more noticeable in the case of our No2 (boy) who was there for five years, from Form One to Form Five. Our No 1 (girl) spent only two years from Form Four to Form Five.

Half way through his hostel life, we became aware of our No2's interest in music and the formation of a musical group, which performed at their school functions. We understood the group was good enough to be invited to the function of at least one girls’ school. To our surprise their mentor was not a musical teacher but a certain Pak Kasman, a general employee who seemed to have varied duties at the school; as a driver, general worker and watchman. Obviously he was an accomplished guitar player in his own right.

The musical group did not disintegrate when the members dispersed after their SPM examination; progressing to various universities abroad, including Cambridge, and returning years later as professionals in engineering, medicine, law , architect, etc. What is amazing to us to day is how music has kept some of them together.

I remembers the years when they began to appreciate songs and music. Those were the days of John Lennon ( the Beatles ) and Freddie Mercury ( the Queen ). Members of the Queen, in particular, were known to be young university undergraduates. That could a motivating factor to form their own musical group. As men with varied careers these 'children' have been having their 'jamming sessions'. I understand they have, as well, been entertainers at private company-parties.

I was not surprised when I came to know that this group of 'professionals' aspire to produce an album of their own one day! 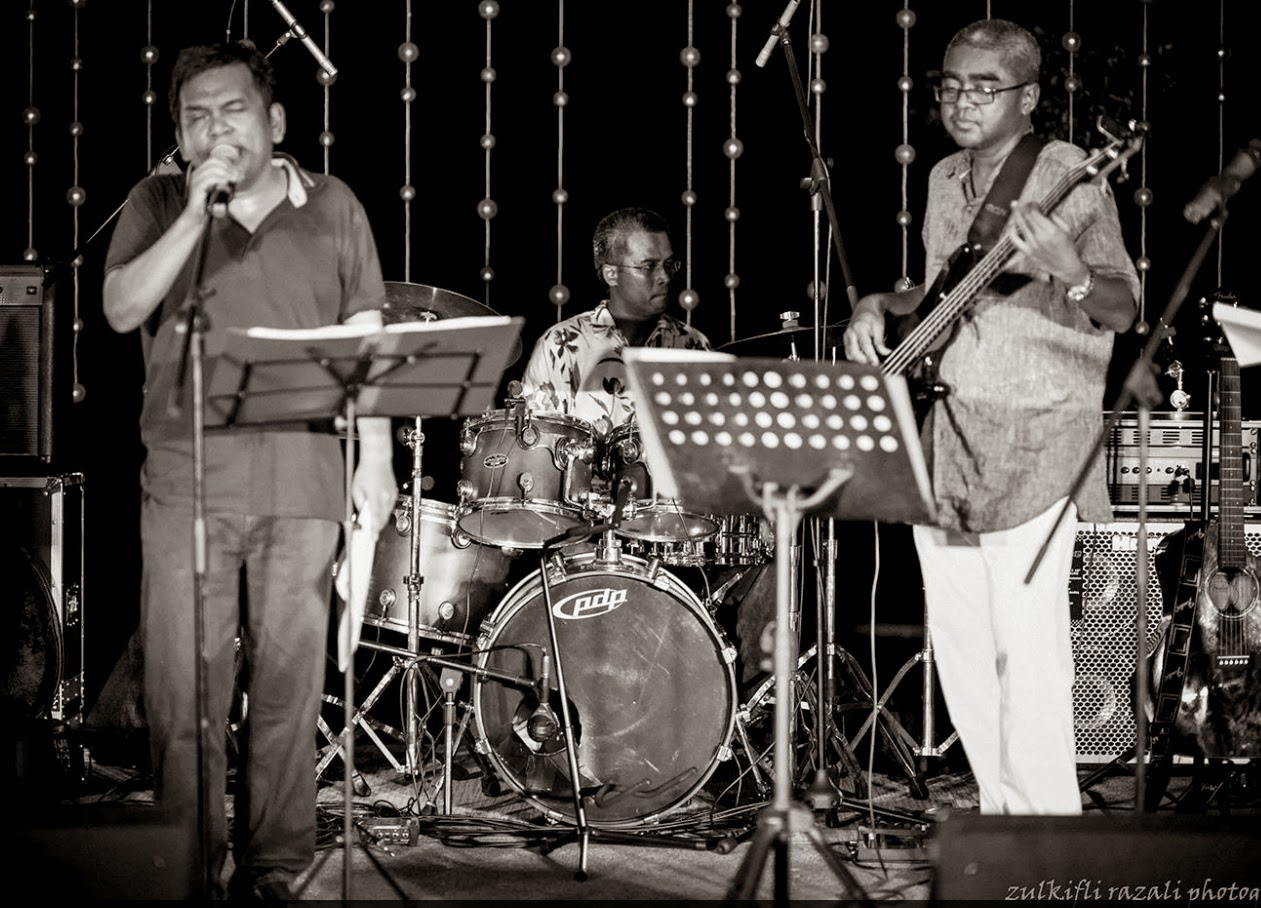 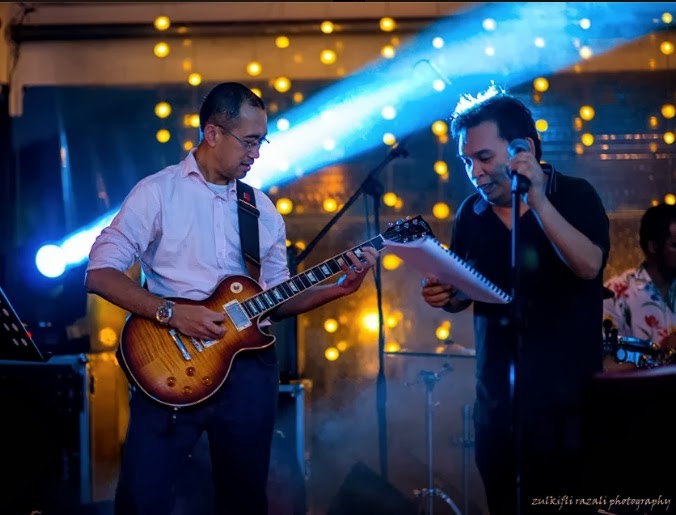 Performing at a function 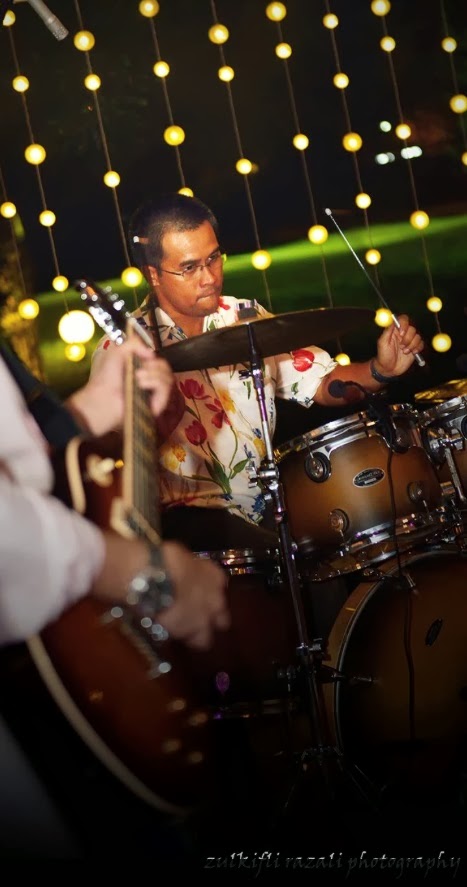 Their drummer (at a function) 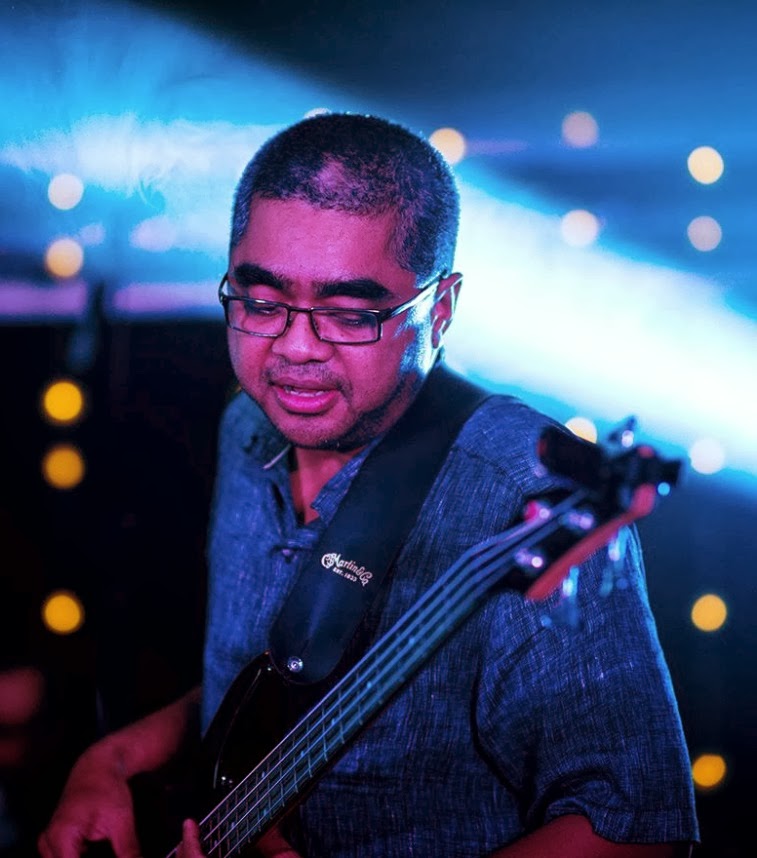 Full of concentration (at a private party) 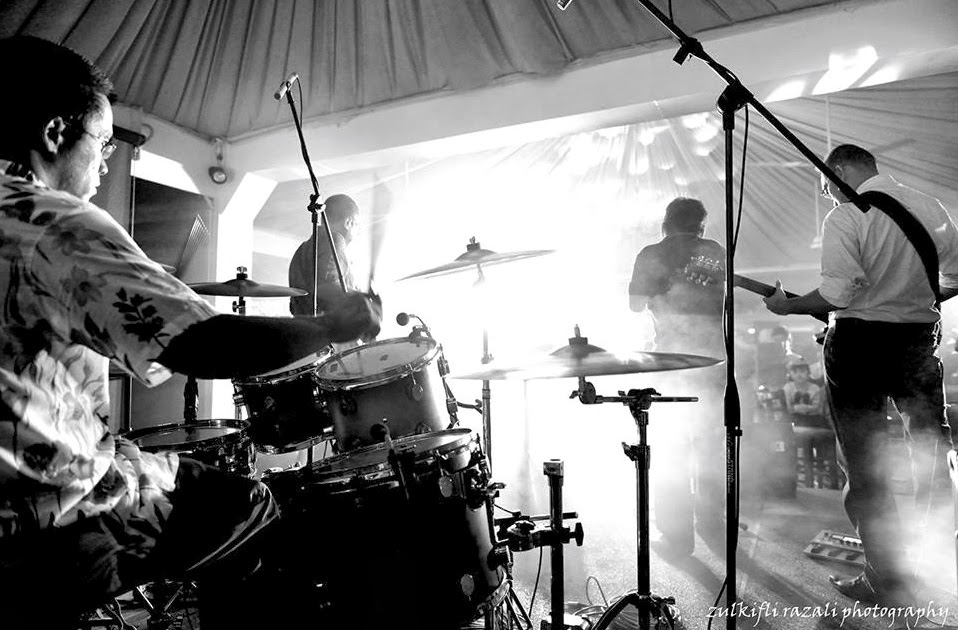 Hard at work (at a private party)

Pakcik and Makcik are privileged to have known these children pretty well from their days in school. They are our extended ‘children’. On the 4th day of the New Year (2014) the only bachelor member of this special group flew  all the way to KT to personally invite us to his wedding. 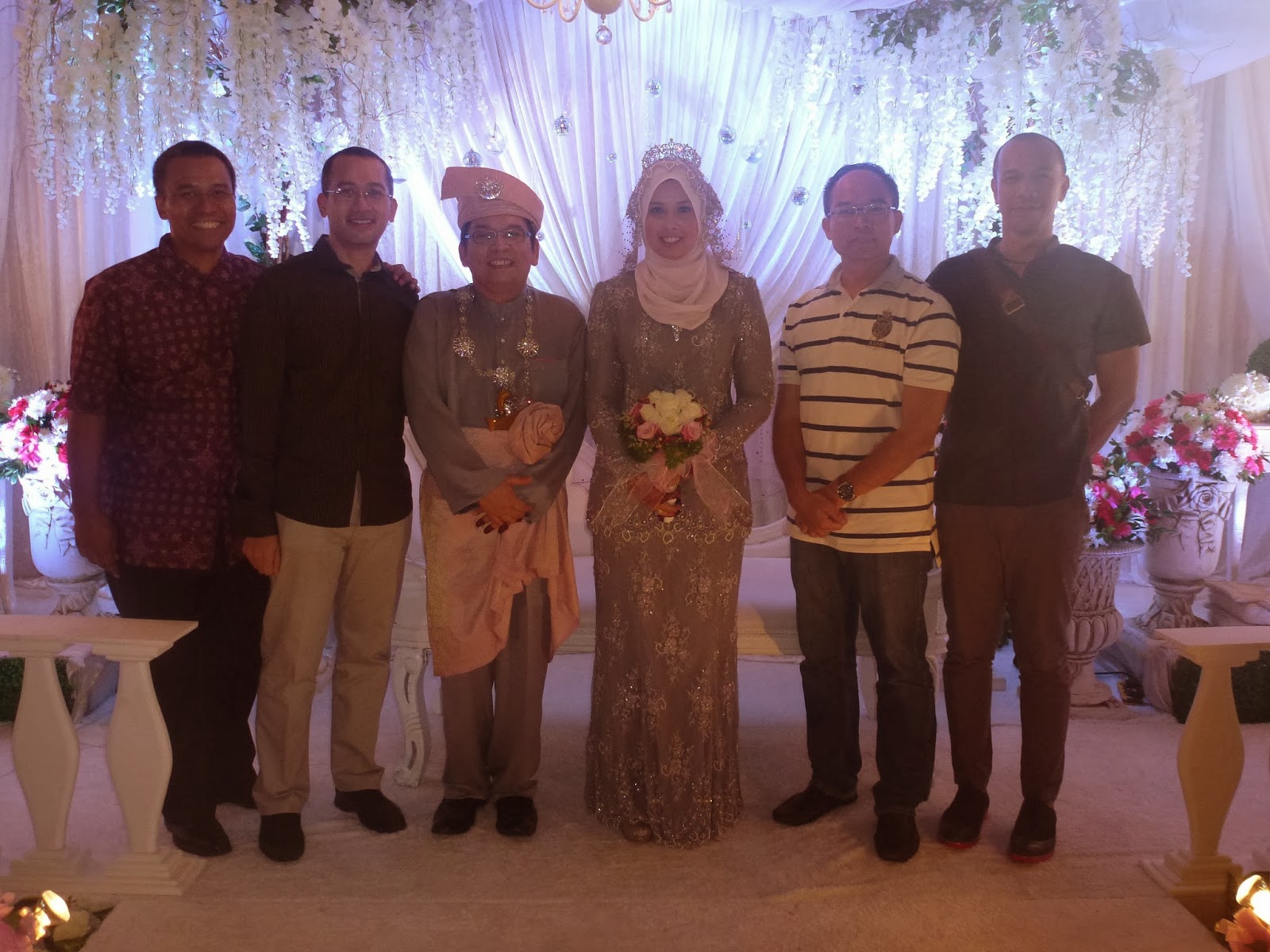 The last member to start a family


How on earth could we deny his wish after all the years we have treated him like one of our children? 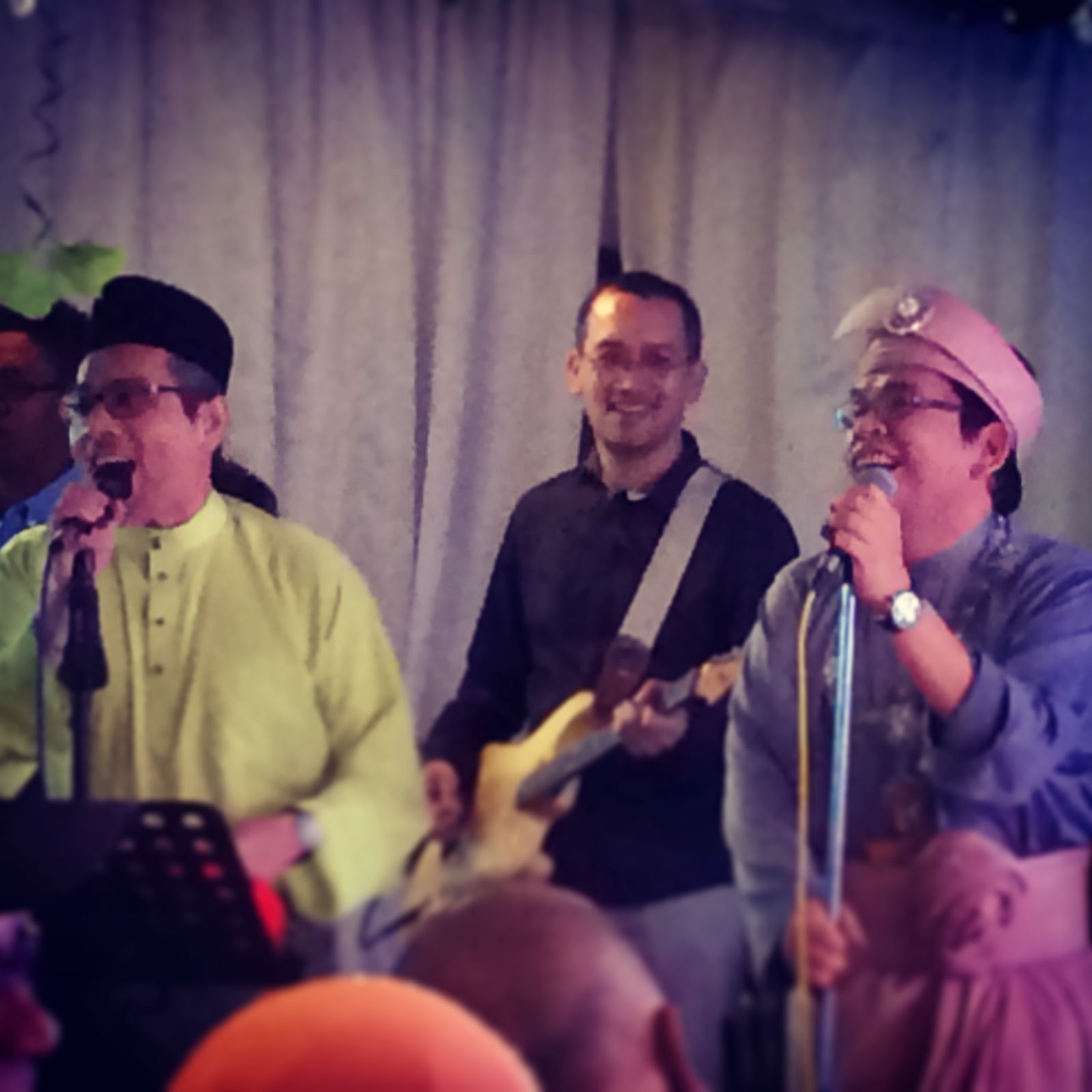 The groom himself and his group( at his wedding ) 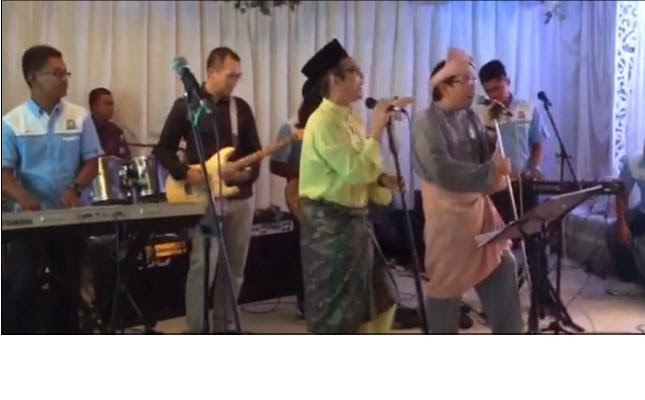 The groom and gang entertainig guests 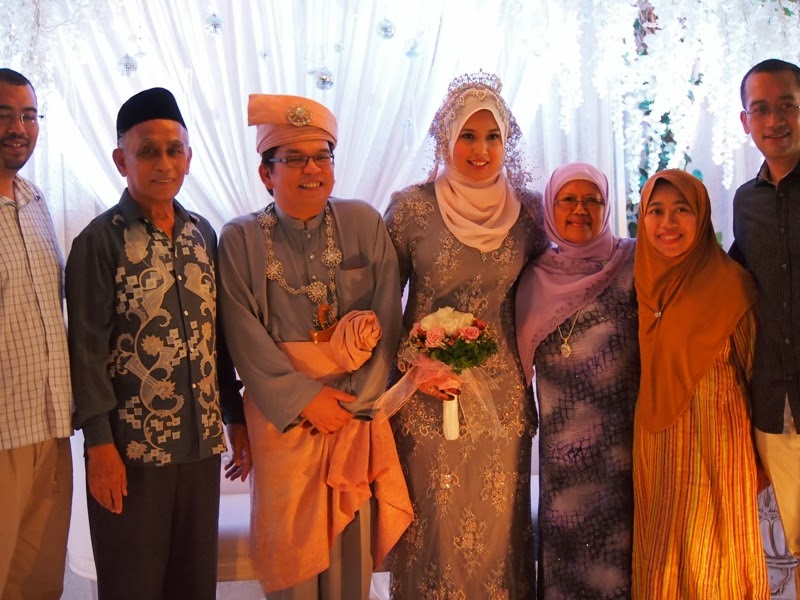 An occasion to cherish

There we met our old ‘children’ ( certainly no longer young school boys! ) Indeed, it was a very happy occasion for us. 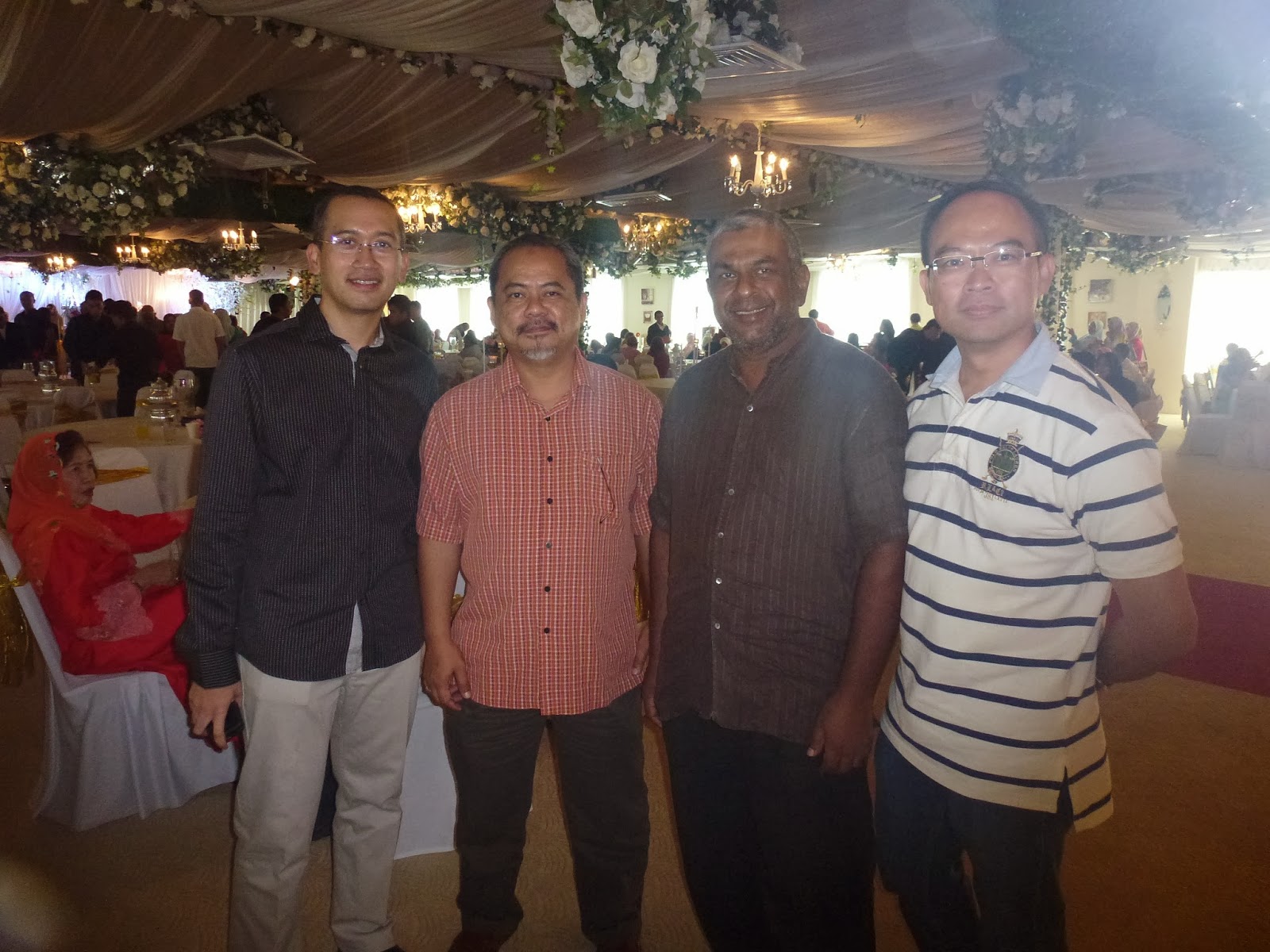 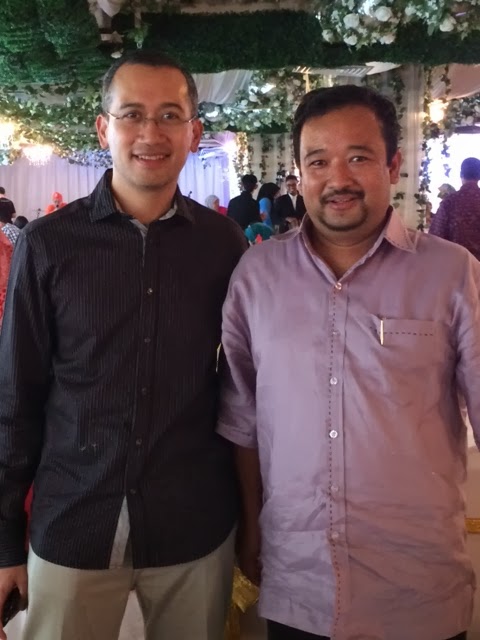 Typical smile of Engineers  from Sheffield and Bradford 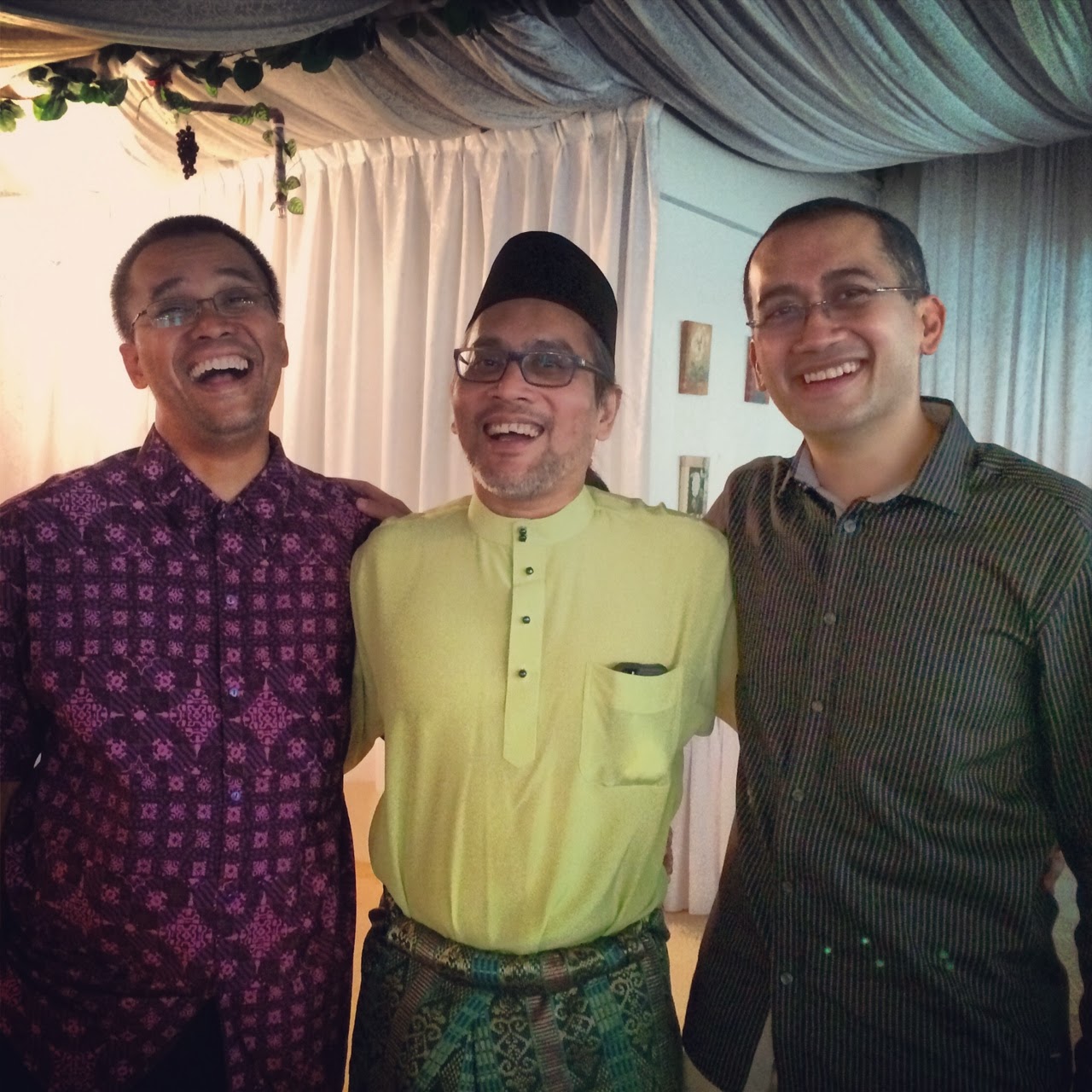 It was also an opportunity for us to meet those we had not seen for quite a while. One of them was surprised when I told him that I still remembered him too well – a boy from FELDA in Johore ; who went to the States to do aeronautical engineering. 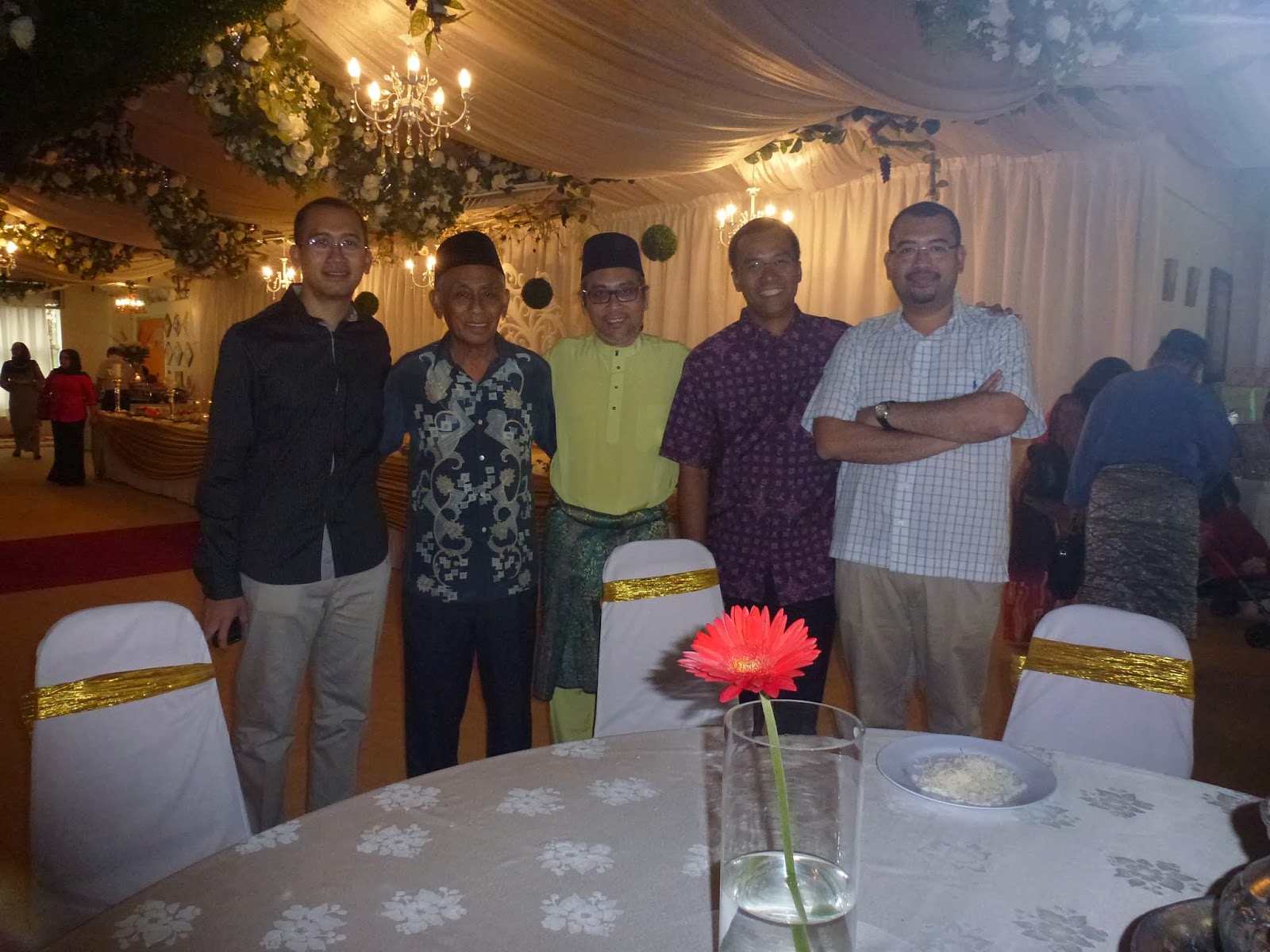 Those were two happy occasions of two weddings early this year.

Isn’t life richer when we can claim having so many successful ‘children’?

Dear Pakcik,
It is just amazing.A lesson in having a relationship for a life-time. What is it that binds between friends. One gets a lot of answers by way of anecdotes reading your posting. No way you are going to miss either. Thanks for sharing!

I am glad you agree. Even with not so many words you are very welcome.

We use varied means to illustrate what we understand of lessons in life. You have your haiku, Hank.

Incidentally, I mentioned you to a Dato' here - and he remembers you well as OP.

Assalamualaikum, Pakcik. The nicest part of our life - surrounded by so many wonderful people. A blessed feelings indeed. Pakcik, sent you an e-mail last week. Hope you have had the time to read it. Have a good week ahead.

Maaf Pak Cik, lamanya saya tidak hadir di sini, membaca dan bertanya khabar. But I do catch a post or two about you and makcik in your no 1's fb, the latest one of you in KL on the first occasion I supposed.

Reading from your view as a father figure to your son's friends is certainly interesting. I still meet and keep in touch with a few of my friends' parents but I never thought about this.
InsyaAllah will try to keep this in mind when I have the chance to meet up with them.

Your no 2 in school band? If during my time too then his school and mine might have "fight" during the competitions..Ninot and me..us being in yellow uniform and blue skirt with white boots...hehehe.

Those were the happy days. We still could laugh over our antics..nowadays over fb, groupchats..that's why I guess mamatom has slow down on her blog as well. :-D.

Haslinda,
WAKSalaam
The need to feel so is greater when we grow old, having lost so many loved and dear ones. I hope Pakcik's response has been received.

Cheqna,
WAKSalaam.
Now I understand of your disappearance. You have joined the F/B group which I never open. Do noot even know how to do it. My No1persuaded me to have a F/B three years ago and I think it is still there.

What saddens me is to realise that I have lost so many blooger friends, a few intimidating me to join. No, a firm no. I prefer my slow mood, thinking and expressing at my own pace. Each time I was on my way to Losong I passed your area and wondered where in the world you were trotting.

Don't forget the elderly generation. Salaam to you and to yyour mum if you remember.

Dear Pakcik,
I can think only of Datuk Senara. Not met for quite a while! Pl convey my warm regards! Thanks!

Life is such a blessing. Seeing the beautiful smile and the journey that you've been through is unforgettable!

WAK Salaam.
I did wonder where you had disppeared. Workload is a problem with most people until one gets to my age when workload is what they say " gatal sangat nak cari kerja. Bary tahu!". Don't think of that for the moment. Build your castle now to enjoy life later.

The 'engineer' from Bradford looks very familiar. Perhaps he is my senior in the late 90s.

I am not at all surprised that he is your senior from Bradford.

It is a pleasant surprise to see you again. I have had the impression that you have been so busy blowing bubbles here and everywhere for worthy causes.