Initially, I had no intention of writing about this year’s Merdeka celebration. This morning, however, when it is all but over, the dailies splash all about yesterday’s events, the gtreat celebration. Without class at Almanar the whole day today, fancy-free and not having much else to do, I thought of tidying up my bed-side set of three drawers, one of which contains my most valuable property – my‘ancient’ diaries, one of which was wrapped in a large envelop. That was the one most damaged – the work of silver-fish during years of storage until I realised the damage five years ago, in September 2007.

We were then celebrating our 50th Anniversary of Independence and I wanted to go back in time and write something for my new blog. It was my 6th entry ; and, coincidentally, I chose to make that entry as Part 1 of a series to be known as ‘Pak Cik reminisces’ ( click here ). Right now I have come to Pt 33 in this series, Alhamdulillah.

Yes, 1957 was a lonely part of Pakcik’s student life, being 13,000 km away from home. Tears rolled down my cheeks when I heard the three shouts of ‘Merdeka !’ by Tunku over the BBC radio. 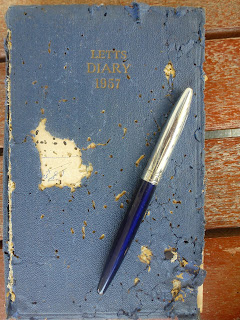 Apart from that Pakcik could only read from the British dailies and listen to the BBC radio the sketchy coverage of the Independence Day of MALAYA.

Well, 57 years ago Pakcik was twenty, independent of my family. The mathematical part of me began to do the sum, 57 + 20 = 77. Seventy seven rings a bell. Those were the years when a very popular TV private detective series called ‘ 77 Sunset Strip’ was a hit. Later it was followed by a very popular comedy series, called ‘All in the family’ ( which incidentally prompted me to start my other series by the same title – minus the comedy part.) 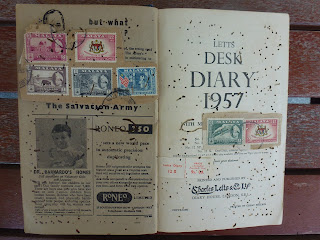 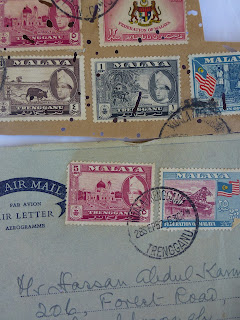 If I may be allowed to digress, please look at the picture of few old stamps kept between the pages of my 1957 diary. When I look again and again at these few pre-Merdeka stamps, I have my regret. I grew up with Jawi script and the stamp values were written in Arabic numerals. Today, perhaps because we are Merdeka (possessing our own freedom to act), we have discarded our affinity to Al Quranic script and its pronunciation. It is not just the show of our freedom to discard but also our freedom to embrace the great many English words as part of  Malay vocabularies!  Yes, indeed, we have the freedom to remove all the shady trees down to their very roots simply because we wish to show our freedom to build a mansion that, we dream, will one day reach the sky.

Alhamdullah, Pakcik! At this 'young age' I just wonder where do you get the energy to give your all! Doting around with the cucu is one thing expected. But to still handle classes is quite another..I could still remember vividly of events of that morning. My only regret I don't have any diaries to help me remember. Thanks for the memories!

This is wonderful, pakcik! Please keep your reminiscences coming! --- Howard

TQ for sharing the stamps with us. I had collected old stamps before (when in Primary) but must've lost interest in it after awhile. And those in your pics bring back memories..

Salam pakcik. This is eddy. Really miss to meet with you pakcik. Now, I am with a france company called Beicip Franlab. Based in KL.

Dear Pakcik,
Wishing you May the Blessings of Allah be upon you on this 77th anniversary of your birthday and may you enjoy good health and happiness. I think Jawi will make a comeback as Doomsday gets near and I am beginning to get accustomed again to the arabic numerals as I read the Quranic text. Your penchant for keeping records of the past in your age-old diaries is absolutely a classic habit which unfortunately is a dying art nowadays. Keep up writing your wonderful reminders of the past great years.

Dear Hank,
We all have enough energy unless certified ill with something other than laziness. How on earth can you produce your haiku practically everyday when you need to look up specific references? I am not about to be told that is not all you do everyday. I wouldn't believe it anyhow. It is our interest in what we do, right?

Now comes September. How about September in the rain for a title?

Howard,
Citizen of the world, where are you, here, there or there?

I can imagine how, one day in a distant future, your blog will carry the reminisces of your past in the four corners of the world.

I habe been reading of so many water woes in Selangor and other parts of the country. When the work you are involoved in is completed I hope none of these will be heard of any anymore.

I think stamp collecting as a hobby does not create a lasting interest. After a while there is very little one can do to keep active. That is my feeling. However I understand it can be a kind nof business as well - with old coins etc.

Eddy, I have asked a few Hari Raya visitors about your whereabout. None of them seemed to know. Would you please email me so that I can update my list of ex Almanar pupils? almanar@pd.jaring.my

Your blogs have long been deserted!

Do you really celebrate Merdeka - in the lab?

I am now too old to celebrate, just reminisce and live in my past. Don't work too hard. Take time off and pay Pakcik and Makcik a visit - just a couple of hours' drive, at the most.

Dear AHS, I thank for the wishes; and wish you in return.

With the old diaries readily at hand I tend to live in the past. That is not very good, is it? Strange enough I dropped 'history' from my Cambridge Scool Certificate exam. What an irony, isn't it? - enjoying the past but not history as a subject!

Hello from kota kemuning Shah Alam. Dear AK when I went through your Merdeka+20 I too started to recollect the year 1957. I actually celebrated it away from Teregganu I was at Dataran Merdeka on that particular day of cause with feeling of emotion and feeling of joy and proud being Malayan Being a student then (me , merdeka+22), brought tears when the shout of MERDEKA echoed. Then the other reflection that reminds me is your Letts Diary of which I too used to buy them as it contained a lot of technical data useful for us students. As for Terengganu stamps I used to be a small time stamp collector. Unfortunately after moving around in the cause of my duty I simply do not know where they are now. SALAM,CHERRIO and see you soon
Zul.

You, being two years my senior (tabik, tuan!) would have the benefit of understanding and remembering the event more than I would. Do a final search in your 'junk boxes' as I have been prompting you to do. I could do with some of the skeletons to write about in this blog.

I knew you could do it without efford. The picture is a like an old scene in Kuala Terengganu, called 'main hujang' - playing in the rain.

Dear Pakcik,
History repeats itself but when you write your own story, it is more for posterity and need not be repeated. No, your reminiscence is important for others to know more about what makes you tick,especially at this point of time where ageing is always associated with dementia and many other debilitating disorders. Your diaries serve as an important reference which would otherwise have gone into oblivion. Your dutiful notes of the past are of immense value not just to you but others who want to learn from you.

It boils down to a matter of one's judgement which, except HIS, may be bias and not be totally correct. Thank you, my friend.

Salam, today is the last day of Shawal, so I guess I am a tad late to wish you `Salam Shawal alMubarak mina adil wal faiizen; but better late than never, is's said. I just happened to be browsing MM after dropping her a few lines.
After the latest takes by many on `Tanda Putra' I wondered whether you may be among the many who kept logs on the unfortunate phase of our history, the May13 riots.
I was elsewhere when they happened but some people I knew were in ITM Jalan Othman Camus. But I have lost touch with them!
Maybe you could jot down from memory (not that May13 should be at all reminded) for posterity!
Of course we already have several journals and writings by many relevant quarters.
I am just hoping there are still many older than 44 years olds, who can shed more truths and lights on these Darkest days of Malayan History!
You are much appreciated for enlightning us if you do. Wassalam.

Salam again, Ia am sorry but I forgot to mention that my blogs has been dormant for something like 8 years after my first cucu sulong, agirl was born in 2005. Then 3 more came along so I am a full-time Wan. I stopped also because at time, I was afraid I would be treading on undesirable domains `personal lives and musibahs' which may be best left to others to comment. For instance, today tale of an 18 year old 6th Former from Besut and her `haruan' father.
Besides, I have to mind my stress level having had a major heart problem last Deepavali. I do a few hours daily dropping in and saying my 2sen worth hoping they go some way to `amar maaruf, nahi mungkar!'
I wanted to revive the English version when `Tanda Putra' began screening but thought it best left alone!
I really miss the happy and vibrant days of inter-racial harmony back when things were on even keel. Now, I am not sure especially with MY heading the Education Ministry, and a rather reticent Idris Jusoh to assist him!
Wasted asset. He should be in the Finance Ministry or Part of Pemandu.
Take care, wassalam!

Waalaikum Salaam to you as well.I remember the fateful May 13th. If you press 'click here' in my posting above you will be taken to my two earlier postings in which I briefly wrote about the event.

I cannot over emphasise over certain event in my blog lest I will be mistaken, politically or otherwise. I do this in open discussions with people I know- at times on emails. For this reason I seek to know others' mail address inj case I need to expres something privately. Would you please email me on almanar@pd.jaring.my.

I cannot understand your saying, 'my blogs has been dormant for something like 8 years'. I notice new entries. But I am totally lost how to leave message - I just cannot understand the 'joining the circle' etc. I would have loved to read your entries in full like most blog postings and leave comments - not with those of your blog type. It sounds so exclusive!

Anyway, I thank you for visiting. I reserve my comments on MY and IJ.

Will visit your blog often now to read.
Take care

Waalaikum Salaam to you too.

There is something very unusual about your website. I have tried in vain over and over to get access into your blog. You are very welcome here. Would you please send an email to me at almanar@pd.jaring.my