In Pakcik’s family August is the month of celebration, this year being exceptional.

There are three birthdays and three wedding anniversaries – birthdays for three grandchildren and their grandmother, and wedding anniversaries of our two children and their parents. Isn’t that confusing and puzzling enough? I will not add to this mess with the mention of the Merdeka celebration. And following hot on the heels of all these comes the birthday of the old man himself. But let us forget about all these as the following is the reason for this entry.
VISITORS.

- Apart from family members and friends, about fifty ex Almanar children came visiting,  That was for Hari Raya. It was quite a sight to notice doctors, engineers, nurses, teachers and all, some with spouses and a few with one or two children each. 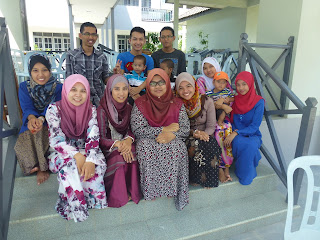 A group of ex Almanar 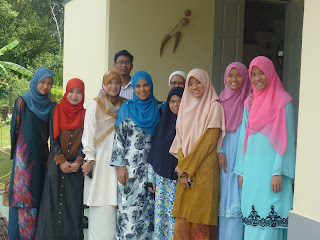 Another group of ex Almanar


Tired,after the first few days, Makcik left for KL with children and grand-children to continue celebrating there, leaving this old man to hold the fort, not expecting the unexpected. 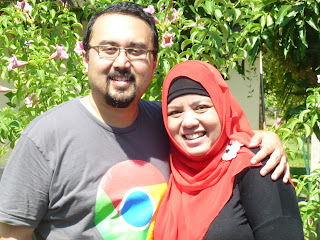 - And that was the time when two special visitors came around. One Malay couple from California, Shazron and Zuzanito, rang me. Two days later they called on us (I should say ‘me’).  It was Awang Goneng who brought us together. We had a few hours together including for two of us to go for Friday prayers. I am pleased to have met them and look forwards to seeing more of them. As my cooking skill is limited to preparing three-in-one instant coffee and making hard-boiled eggs, we went out for lunch. The deal was that they would have to foot the bill if it was beyond a certain figure, and I lost because it was a few ringgits short of it. But I would be very sorry if they had to pay after their morning's experience at their sea-side resort hotel restaurant. They were fleeced having to pay a whopping THIRTY five ringgits for a plateful of tasteless‘nasi goreng’!That price could, perhaps, be acceptable in sunny California - but in Terengganu! Talk about world-class daylight robbery! 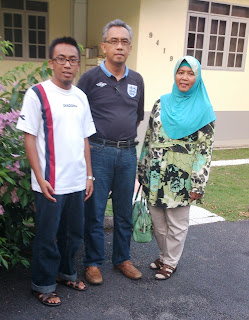 -  On the following day my second group of visitors, a couple and one son turned up totally unannounced. I had just returned from town, shopping for my supper, and was about to change into my birthday suit when the bell rang. Someone was at the gate! In sarong and vest I rushed down and out to find a family of three.

The man’s smiling face looked vaguely familiar. He dared me to identify him and I was wrong. But I was almost spot-on when it came to guessing his age – giving him just one year older. I do not feel bad about that since he has chosen to use Oldstock for his blog name. Indeed the well-known blogger came to give a surprise visit to one of his ardent followers. I marvelled at his skill as a detective, sniffing his way to Nuri without anyone’s help. But I felt rather bad as I could not do justice by entertaining them to a meal.

And now I am beginning to wonder the reason behind this surprise visit. Their son is a young doctor who has just returned from overseas, a very eligible bachelor indeed. Were they, by any chance, expecting to catch a pretty face lurking behind Nuri’s door (mengintip bunga ditaman)? In that case, I am afraid their visit was a disappointing one.A few days earlier would have been of interest when ex Almanar children were around.

Note to my visitors:My new friends from California and Oldstock and family, thank you for all the troubles you cared to take to visit Nuri. We are honoured. I am very sorry that Makcik was not around to do justice to your visits. But this is not going to be your first and last visit, I pray.

Dear Pakcik,
The auspicious month of August must be your most celebrated month and I must wish you a happy birthday on whatever date it falls. May Allah bestow on you good health and happiness. Whenever a visitor comes a calling, Allah bless you with his Grace and Benificence, so even without Mak Cik you had done well to receive them. Al-Manar will always be a pearl well remembered by those who had gone through its portals.

Dear Pakcik,
Alhamdulillah. You held on and they kept coming back, even strangers.It appeared to be generations following one another to be at al-Manar. It's just great!

Happy Birthday to you and Makcik. In August it goes the same for me too! My birthday plus birthday for my DIL and her wedding anniversary and birthdays for 3 grandchildren.

If we're nearby we can even have a very big cake to cater for all in one big bash!

Through blogs and emails we can nurture friendship in ideas, comments, sympathy, support etc. I think you notice aas well how a number of people with serious illness resort to blogging and find, sympathy, relief and even cure. To me it is a good pastime which calls for my grey matter to remain active. I think we all need this.

Negeri Sembilan has a lot of histories and custom, some of which are foreign to outsiders. I wish you would look into this area.

If you have any news of our late Mustapha's family members please let me know. I find it hard to dismiss that couple from my pleasant mremories.

Fancy the two of us have so much in common by way of birthdays and anniversaries. That surely tells something of those involved , all the good things, of course! One dictionary gives the meaning of 'august' as 'old, famous and resapected'. How about that. Turn that into your famous haiku. my friend!

Happy birthday to the mudir of al Manar. May Allah give you, my dear Abang Ngah, and to Kak Mah too, His choicest blessings. I am so happy to see that you met the two visitors from California. The resort that ripped them off should be named and shamed.

Dear Pakcik,
You are very right indeed. This activity keeps the brain active and the idea that you suggested is worth looking into. I just met Allahyarham's brother a couple of nights ago at a wedding function, but it did not occur to me to ask him about it. Will do it the next time I meet him, Insha Allah.

Briefly I took them to see the neighbouring area. Less than one km from us is a vacant house standing on a piece of sea-side land like ours. Who knows they may like it if the owner is not asking for the moon.

My friend from Dungun told me that the resort is located on a very beautiful spot - a 'tanjong' as well. How a third party can own that first class resort is a question. Isn't it so unthinkable that Pasar KP will be that one day, a pride for whom and at whose expanse? Mi, it is Pulau Redang all over again. I remember what our three girls remarked to us as soon as they met us waiting for them at Merang - It's all London prices! We have achieved the world-class that we are so proud of.

Thank you my friend.

Dear Pakcik,
'august' poem fulfilled. But I always prefer something different from the obvious. It makes it stand out way from the rest.

That is marvelous! A number of comments were left so soon after posting showing how that is appreciated. People like something different and you are willingg to venture into that. Well done my riend.