Aren’t we all worried?

It is exam time. Last week 481,424 children were reported to have started sitting for their PMR examination. And in a fortnight’s time about 400,000 will sit for SPM examination.  We hear all the noises made by parents, particularly those who are at this game for the first time. Children, who are right now in the middle of PMR exam, sat for their UPSR exam three years ago, and will face their SPM exam in two years’ time. It is exam after exam, a worry after another.

What comes to my mind is how many of these children give their families worrying time. These are the fortunate ones, being loved and cared for. Little is said about those whose performance is no skin off anyone’s nose.

Every where in our country are homes for the orphans and children of the less privileged families.  Those who have been following this blog have read about one home oficially open last year. It is just one kilometer away and is on the same stretch of coastal road. From the very start Almanar has been involved in one way or another with a small number of its inmates. And less than a month ago, Pakcik was handed a new group of 20 Form One children. This group is supposed to consist of the better children selected from a larger group.  In two years’ time this group will be facing their PMR exam. What can Almanar do to help these children on top of what they are taught in school?

Now let us have a look at their last year's UPSR exam results after six years in primary schools in various parts of the state.  The following list shows the performance of these twenty children, ten boys (number with ‘b’) and ten girls (number with ‘g’).

Watch the performance of the last seven children, five boys and two girls. It is C’s and D’s, even E’s as well. I shudder at the thought of those not selected for Almanar’s help. The above list shows one girl being good enough to score A-grade in English.

When I see this kind of performance what comes to mind is how lucky our children are.
Who really cares for the future of the above children?  We get jittery when an exam time comes. Those children grow up without creating jitters to any body.
______________________________ 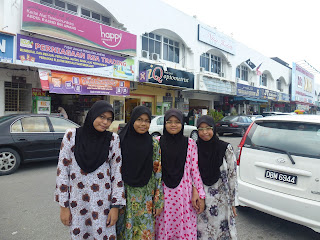 Now we can see you

p/s :
While we were waiting for the glasses to be ready at the optometrist one of the girls popped out this question; “Pakcik dah lupa saya? (Have you forgotten me Pakcik?)

I was pleasantly surprised to be told by this girl that two moths before her UPSR examination last year she joined a group of about twenty children selected six months earlier for extra tuition in English and Maths. The primary school had requested Pakcik’s help for a weekly class there. I obliged the school, doing the twenty-minute drive there every Wednesday afternoon. Late as it was to join the group, this girl managed to score an A-grade in English in her UPSR. Now I remember this girl. Not among the top UPSR scorers then but she is the one on top of the list above. Her father is an invalid and life is hard for her family. My gut feeling tells me that this girl is a spark, a bright spot in that group. She may, hopefully, ignite the rest.
_____________________________________________

As we fear our own children not getting all A’s, spare a thought for these poor children
Berkhidmat kerana Tuhan untuk kemanusiaan.
﻿
Posted by Al-Manar at 10/14/2012 10:26:00 pm

Dear Pakcik,
I have in my possession some books that could be of use to you. Not as many as there were in that package that never reached you but sufficient, I hope. Now, when would my Mama or Dad be able to hand them over to you? We don't trust the mailmen anymore. purrrr.....meow!

I won't be able to thank you fully for the articles on your web-site. I know you'd put a lot of time and energy into all of them and hope you know how much I appreciate it. I hope I could do the same for someone else sometime.

I can never get over the loss of your special gift from Sydney. It is fated that way. You must not feel obliged to make good with new purchases. I mean this. What I am truly short of is human resource to help, on one hand, and on the other is a magic wand that I can whip off the children's laziness.

Both of us are home most of the time. Call us and you are our welcome guests. If it is just a matter of passing over the gift you can call at our house on Jalan Balau,Damansara Height where our daughter and family are. To make it even easier let me know the place and one of our three children in KL can easily call on you to pick up whatever. Email or call me any time. Thank you for your concern.

I am truly gratified with the sentiment you expressed. I have done it all with pleasure, not in any way a boring task. I would love to know your identity if I may - email- almanar@pd.jaring.my

Anyone who wants to send thing to Pokcik can always leave it with me in Ampang Jaya. I can easily get it to Kuantan where Pokcik Hassan can easily picked. Thanks.

Thank you veru much for your offer. You are very kind.


Pokcik Hassan, Sure we all are worried. The present education policy has left the majority of the Malays with only one language and that language is not a language of knowledge; whereas the other Malaysian has at least two languages at their command. Unless the Malay takes the English language seriously then there are no ways we can confidently move forward. BTW there are some 50 thousand of graduates jobless now. Sad but true. My two cents.

50 thousand is not a small number and does not judstify the general claim that our unuversities are 'taraf antara bangsa'. On the other hand many of our young ones graduate in such a high sounding field as technology of timun china agriculture, tecknology of deep acqua sea fishig etc which our universities are good at designing mind boggling courses; when these graduates do not like to soil their hands or do niot know wish to know the difference between mata kail and mata ikan. Many think they deserve a cosy executive chair with a scroll.

Thank you for the unemployment data, a sad picture which tells a lot of ailment in our society.

Dear Pakcik,
You're presented with all sorts of challenges at every step. Getting 20 new ones means the beginning of 20 potential 'problems' On the other hand it makes a benevolent heart outshine events. You have the advantage of hands-on connections that solve matters on the spot. It takes time and efforts but the relieved faces of these deprived ones when you helped them was enough to melt oneself. I can imagine how it made your day, every day. Pray ALLAH the AlMighty accords you the strength to accomplish.

I often end my day telling my other half of my disappointment, or just keep silent when I feel totally 'fed up'. You see if you want so much and see very little the frustration that follows often bears heavily on your mind. I suppose sympathy from people helps to raise your spirit.

God-sent! That's what people usually describe big-hearts like you Pakcik.

I have a small request though: if ever you come across that one super-duper tool you claimed the "magic-wand that I can whip off the children's laziness", please let me borrow it. If U wish to rent it out, pun splendid! :)

Of course you and our friends can borrow my 'magic wand' which must not be used against a spouse. Thank you MamaTim