It saddened me to no end to hear of the UN decision on the no-fly zone involving military actions in Libya, short of ground invasion. I am no political analyst, least of all of world affairs. Perhaps I should rightly be blamed for viewing the scenerio from one narrow perspective – Arab world’s inability to correct itself; and these countries are among the world richest in natural resources! America, France and Britain are the main players. Little is highlighted of the views expressed by Russia and China.

How convenient it is to act hastily just because the Arabs themselves have asked for it!

Members of Arab League want the Western powers to solve the problem within another Arab country – no matter what it takes because the Muslims themselves have failed!

Once, as a young boy, I was taught a saying of our great Prophet. 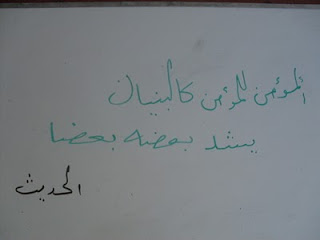 The greatest of all prophets drew an analogy of the relationship between a Muslim and another Muslim as a building in which different parts strengthen one another. The All-Knowing chose an Arab to be the greatest prophet and the holy Quran in Arabic. Do we not wonder why?

The long and short of it, we have failed.

Nearly twenty years ago I had a first hand story, from a very senior European engineer working in Algeria, of a fantastic unground river project for irrigation purposes. A super power was trying to spin it as a underground atomic project! The hatred for that man in Algeria began long long ago. Orang mengantuk disorong bantal.

Yes ..we have failed..
When it come to greed.. power and material wealth.. men are prepared to commit many endeavours.. not many of them are good or even beneficial to human kind in a long term.

The enemy is always on the standby mode to "help" - conquer and divide - to weaken the Muslims' strengths..

We can shout our heads off but who cares. Get your project going and come back to rebuild Pulau Duyung. Two nights ago there was agood programme on boat building on PD involving Giat MARA. I only caught it half way through.

You are very right about keeping the enemies divided. It strange why people who matter do not see this, and differentiate between foes and friends.

My first thought - how convenient. And an internal matter too.(Even though Ghadafi is mad)

Let us see what happens when Israel makes another move against Palestine. What then? How will this new age Security Council and allies (uneasy bedfellows still) act then?

Yes, we will see. All that we see of global hypocracy should teach us the way we ought to contribute in shaping our own small world - a family united in itself and with others.

There must be a poetic theme in this - keluhan jiwaku.

We are nothing and there is nothing we can do other than praying for the innocent?

I missed this entry until u pointed it out to me, Akhie. But i didn't read the comments. The reaction shown is what i fear - one of dejection, helplessness and abandonment. Yes we must pray to Allah to save us all but WE MUST NOT GIVE UP. WE MUST DO SOMETHING TO CHANGE THINGS N MAKE A DIFFERENCE, HOWEVER SMALL. we must inculcate that spirit among the Muslims.

I do not think much of world affairs. It is just the lack of readiness to forgive and forget that saddens me.

Funny you mentioned the water project in Algeria. Go to the link below and be surprised:

But they've probably bombed it all now.

Thank you. It is very good to know this poorrichard blog. This will appear as a posting for information to others.