Yesterday morning when I opened our bedroom window the sight of the sea caught my attention. “ The sea! What’s happened?” I half exclaimed to ask myself.

The surface of the sea was very unusually dark, almost black, with strange formation of waves on its surface under the dark threatening sky. But I brushed what I saw aside, making belief it was just one of those things.

It was almost at the end of day yesterday when I happened to switch on Aljazeera and watched with horror the tsunami scene in Japan. Quickly I took a look at the sea and saw exceptionally heavy sea with wind blowing hard. That should not be so yesterday when the Chinese New had already signalled the end of our monsoon. Later I received a couple of calls telling me that the police had been advising people to be on the alert following the tsunami in Japan. With my other half away for a few days, here I was all alone in a house by the sea. 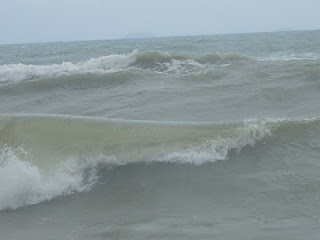 I spent the night, praying that I would not be awakened to hear the sound of water surrounding Nuri ( rumahku cahaya hatiku.)

Regetting that I did not have the presence of mind to capture the sea ywsterday, I decided mkr good today. The sea has not quite turned to normal but nothing like it was yesterday. A fisherman hanging around the beach, unable to go out, remarked that yesterday’s high tide was exceptionally high. I do not think he knew what had likely triggered the condition. I made no attempt to explain. 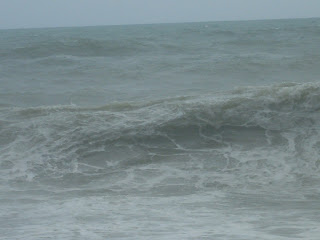 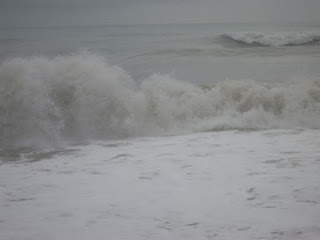 Back in my room with my lap top I began to draft this. Lines from AlQuran began to drift by - 'mauj; pl amwaj - wave, surge of the sea' . THey are quoted not less than seven times in Al Quran. In particular I am reminded of an ayat in Surah Hud ( Ayat 42 of Surah 11): 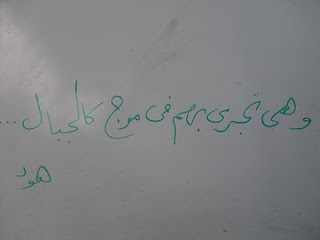 Abdallah Yousuf Ali had the following understanding: “ So the Ark floated with them on the waves (towering) like mountains …..” Yes, it relates to Noah’s Ark, the story that many of us have heard over and over again.

I wonder are ‘the waves (towering) like mountains’ reflect what we today know as tsunami? Wallahu A’lam. The Holy Book has many things way ahead of time and it is not subject to time dimension, one of its miracles. Stop for one brief moment to reflect - Subhanallah.

Mm.. can see that you are very observant..
Luckily for us in the east coast.. Philippine is there to break the effect of the Tsunami Wave.. Alhamdulillah

Salam Pak Cik..
I noticed something different with the weather yesterday. It was not like the day before. I kept wondering and asked my father what was happening. Then I heard an announcement by a policeman, asking people around my kampong from going to the sea or places nearby. That reminded me of you, then I rushed to pick my phone and gave you a call to warn you. I was so worried about you. It was such a relief that you were not on the beach. Alhamdulillah, nothing happended. PAk Cik, I think of you. Take great care of yourself.

Think of Pulau Duyong under such circumstaces as we saw. I am generally upstairs in my house. But high is that compared to 10 mwter high water head?

Don't let that stop you from coming back to where you belong and where people need you.

You are ever so thoughtful.
Love from Pakcik

Thanks for sharing your thoughts and photos. Well our planet earth is still evolving as we speak and nothing we could do about it but to hope for the best. Lives goes on.

My sympathy to all the good folks in Japan and condolence to those who lost their loved one.

Dear Pakcik,
When the 2004 tsunami happened, the sea behaved differently. What you saw was just the ripples....imagine what the Japanese people (and animals) saw. I'm hoping for the best for the animals there. Can't forget that blind cat we met in Acheh six years ago. purrr....meow!

Salam Pakcik...
I was also shocked to find out this news on television. When I called my parents, they said that I shouldn't be worried. Still I could not help myself to do so. Hopefully everything will be just fine in our kampung. Let's just pray for the best and also to the victims in Japan and also other countries.
Thank you some much for the explanations. They helped a lot. Now, I can explain them to my students confidently. Thanks to you Pakcik.

Pak Idrus
How nice it is to see see you back.The other day I had a good laugh reading your posting on facebook, twitter etc tc, and you mentioned something for those about 50 and above. I wondered whether I qualified for that catagory but could not find one for over 70. So I felt rejuvenated and read on.

I have given up on these new gadgets and new ways. I have no Blackberry, nor blue one, and when I see some funny names inviting me to join rhis that I just 'reject'. Life is more peacefulwithout thinking of tsunami.

The fact is, Pak Idrus, I will have to change the hard disc of my 'grey cells' to accommodate all what you wrote. I bought a GPS. One evening I was driving back from Pasir Mas I made a wrong turn. Realising that I was on a slightly unfamiliar road I decided to try my GPS. It took me along the shortest but the narrowest kampong roads. I had to keep my cool and finally I saw Pasir Puteh - my famous long sigh of relief!

This is slightly long-winded. I know this can be shortened if I learn how to use 2, x4, LOL, btw etc. Salaam to you anf family.

A wild cat is always every and most unpredicatable. I really wonder what she does, one day in Sydney, one day up north, another in Penang, acheh, just name it. She is not being planned to be airlifted to Japan, is she? Have I heard of a flying cat doing a flyin visiit, I wonder!

Indeed I can imagine what I saw here just ripples, what of the real stuff? Semoga Tuhan jauhkan.

It was good to hear you over the phone. Do drop by next time you are home so that I can hear all about the interior schools in Pahang. Kalau bawa 'kawan' pun tak apa. Tsunami dah berlalu. Hope you father is back to his healthy self.

Dear Pak Cik,
What we saw on TV were houses and cars ( some with occupants inside) being moved and tossed about. It was most frightening.
We are plain lucky that we are sheltered from a direct hit from the sea.
Your observation seems true. There is a correlation of strange happenings to 'big' events. Sad!

Dear Akhi, always invigorating n refreshing to read you. About your observation of the sea, i m still searching for any revelation about the big wave from the al-Quran. The lead you found is most interesting. Wonder how long it'll take for Japan to recover.
On the computer, reading among the young is certainly affected greatly. More time is now spent on games and chatting. But, books are also available online. My son downloaded 600 + books for me to read. Baru baca 4 buah. Interestingly the computer can also teach many things including ugama Islam. Cubalah "google". Berbagai aspek agama dibicarakan oleh imam2 ternama. Tapi kena pandai mencari dan meyemak. Salam.

As-Salam Al-Manar
What had just happened in Japan, is indded very frightening! My poor chest just rattles everytime I think of the tragedy as shown in many of the TV stations.

There is a correlation of strange happenings to 'big' events. I have heard this quoted before - like restless movement of animals, dogs barking etc.It is very scary indeed. And here, even as I am writing this. I can hear the waves beating the shore not far from my house. It must be the high tide plus, perhaps, the left-over of that massive shake-up near Japan.

You are way ahead of me in this modern technology. My uses of computer and hand-pnone are the very basic. In fact I have only recently been able to post my writing in this blog. I usually had my daughter's help. I still have problems occasionally.

It is hard for me to imagine down-loading as many as 400+ books. How on earth do you flip through the pages? I suppose this is what I have been hearing about Kindle. Only early to day I opened Amazom bookshop to order a few books and there flashed a KINDLE advert. I do not think I will get as advanced as you - unless one of my kids can push me to see how it is. Otherwise there is warmth and comfort hugging my dear books!

Last Friday when I first caught the news on the internet, didn't think that it was that huge as I'd been busy at the office. It was only when my sister in K.T called to say that they had been warned to stay away from the beach area that I knew the extent of it. She too saw the bad condition of the sea whilst at Primula.

Salam Ukhwah,
I've a daughter in Japan and Alhamdulillah she's in the centre part of Japan, quite far from Tokyo & Sendai. She said she's ok and hopefully the disaster won't reoccur. May Allah bless us always and keep us in the right path, Amin...

WAK-Salaam, Cheqna.
Then you knew residents along the coast of my part of the world were advised to stay clear of the beaches. I wonder whether your sister resides here; if she does she would probably know what the catastrophe means to those who go out to sea in their small boats each day for their livelihood.

WAK-Salaam puan Maimunah.
Those not in your postion can only imagine the gravity of your worry when you first came to hear about the tsunami in Japan - a girl, very likely one who had worked so hard to be there in the first place. Insya Allah all is well with her.
I have tried to make a return visit to your blog in vain. I often wonder how one occasionally gets drifted to Almanar, leaving a comment. Thank you.

I'm Terengganu born but merantau few states as my arwah father was a policeman. Now my mother, sister and family are residing there and every couple of months I go back, miss my family and hometown :-)

anyway..yes we are aware of the difficulties faced by the fishermen etc as we have some relatives and friends who are that.

This month we had two blogger visitors to our house, one lady then a man with his family. It was nice of them to come and get to know one another. Would you let me know where your mother and relatives are in KT? Preferably, email Pakcik: almanar@pd.jaring.my