Yesterday morning I heard over tv of another quake in Japan, a smaller one. The bottom of the sea must have gone crazy, cracking and sending vibrations through its mass of water. And here things are truly weird. Monsoon ended over a month ago. End of March ought to see calm sea ready for ‘sotong’ season. But the poor fishermen have not been out to sea for a couple of weeks. ‘Aroh derah’ (the current is strong) they told me. Indeed the sea is unusually rough for this time of the year. Look at the picture I took yesterday afternoon. With the grey looking sea, the dark clouds threatening, it was a frightening to stand on the beach by yourself. 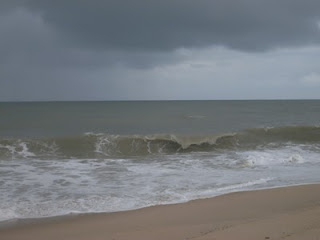 What colour is the sea when it is angry with the sky threatening to crash down?

If that is not enough, we have had a few days of continuous rain. A few days ago we had the second flood in two weeks – floods in March? Yesterday, after hearing about flood entering a friend's Makcik and Pakcik paid him anf family a visit. What a sight to see the ground floor of the house located in a small housing area right in the middle of this beautiful city of the global fame Monsoon Cup. Makcik and Pakcik were invited into the house WITH our shoes on! What a sight it was when the beauticully tiled floor we were familiar with was still partly covered in patches of mud. My friends showed me the pictures he took of his house under water. 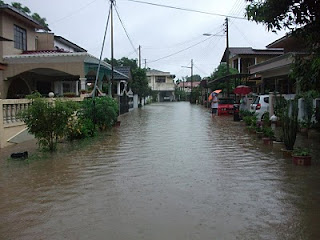 The road between the houses 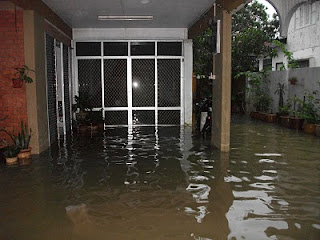 In front of the entrance 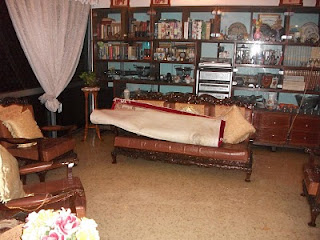 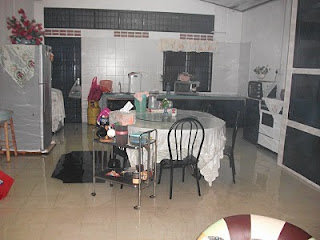 The famous city of Kuala Terengganu is a city by the sea and this friend’s house is just over a kilometer away from the famous Batu Buruk ( Rotten Rock ) beach fronting the vast, open South China Sea. And this city cannot find a solution to drain itself dry of a small flood! My friend and wife spent two days cleaning their house of the mud left by the mini flood. And to think this had already happened a few years earlier.

We can only hope and pray that we would not have to go through anything the like of what the Japanese have just gone through.

P/S; A Note from Awang Goneng.

Just before posting this Pakcik received from Wan Ahmad Hulaimi a.k.a. Awang Goneng in London, an email, specifically personal but with a short note on the latest position of his second book which many have been looking forward to. Here it goes and enjoy the first 27 pages. "My second book on Trengganu, A Map of Trengganu, has come out in Singapore but Malaysians will have to wait until the week of the KL Bookfair end of April. If you'd like to read the first 27 pages, here's where to go: http://www.monsoonbooks.com.sg/downloads/ch1-0854317.pdf"

Dear Al-Manar, I could feel your fear as you stood on that beach watching the sea.

C-i-S
Never change a plan. Keep on changing and nothing will happen - as we say 'sampa kucing ttandok'- even when the cat grows horns

It is fearsome. Then when we read AlQuran we can appreciate the pictures of the immensity, the force, yet the beauty and what the sea (al bahr) symbolises.You seem to enjoy studying that Book and, therefore, should know what I mean.

I never expected you would highlight the two mini floods that took place within a week, once at 2 am on 25th March and the second at 6 am on 29th March. Thank you, AK for being sympathetic towards residents of this community. To us what had happened is the will of ALLAH which there is nothing much we can do, but, a big BUT, is that this was not the first occurrence. Some time back it had already happened three times.

It is not the mini flood that bothers us but its after-effect does - the cleaning up we had to do before the second mini flood came crashing into our homes.

The irony is what has the power that be done about it . They never learnt, in fact, never bothered. Their pride of Bandar Raya Persisiran Pantai seems to be in beautifying the area around Kg. China, ignoring the Malay residents and properties of people around Kg.Air Jernih,Jln.Sultan Omar,Jln. Terkukur Jln Kamaruddin and so on. What have got to be so proud of Pulau Wan Man where the replicas of world gteat mosques have been built; the international event like monsoon cup and other on-going projects which demand so much money? Modern technology surely can be used to solve the simple mini floods of this great city and its endless one-way streets that drive us round the bend.

Are we spending money where it should be?

If we are looking for reasons of being (floods I means).. then maybe those global warming and melting of glaciers may come to mind..
Then again since Allah does not oppress His creations and there are so many warning for us not to do things that may damage the environment or the world that we live in..
Maybe just maybe all the happening is the warning from Him that Human being, His Caliphs on this Earth, are not being good enough ...

We have had so many warnings from Him. Yo and I and the likes of us care who else bothers?

As-Salam Al-Manar
The recent tsunami in Japan is truly very frightening. I always think that our Pantai Timur is so close to Japan and therefore becomes so susceptible to natural calamities that have occured there. Let's pray that such disasters would never strike our country. I hope you will very soon be able to snap pictures of the China Sea with its blue water again and clear skies above it.

There are things over which we absolutely have no control. I am sure all will be well. Thank you sir.

It scares you to think of what the vast sea can do when it srarts to run amok, the tsunami etc. Since yesterday, the sun has started to shine bright and hot, and the sea has calmed down.This is how it should be around this area this time of the year when sotong season will soon begin. Then it is a kind of new craze. We see lights in the boats all along the horizon n the dark - people 'candat sotong' (fishing for squids).I have never been as I am scared stiff of the sea , yet I like to live by one!