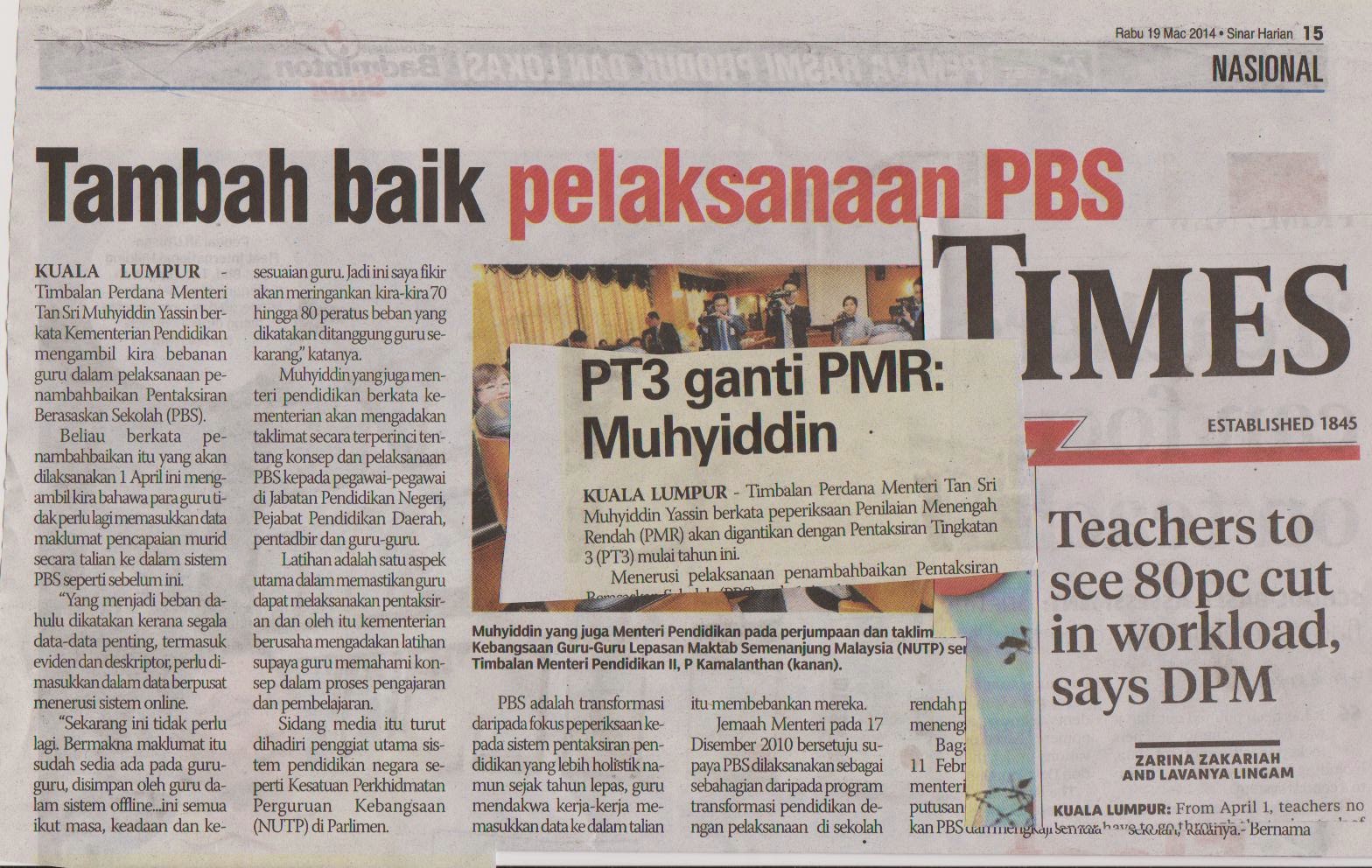 Dear Pakcik
1. I agree with your thoughts. If 80% is to be taken off why nobody thought about it until all the objections erupted or alternatively does this indicate not much thought was done in the planning stage before?
2. If it is countered they planned well before, then 80% (that's a big chunk)to be taken off will be at the expense it being less effective now.

Assalamualaikum....
I like the way you vent out your feeling on this PBS of the Ministry of Education.I consider it a fair way of telling the power circle that it is time they listen to others, listen hard and listen well.
I worked in the Ministry for a total of 20 yrs, though I am not a teacher. For 10 years I was doing Finance and Development and the last 10 years before retirement I was in charge of the Human Resource Department. Although 10 years into retirement now I can still remember the management culture and decision making. With due respect, not many people will take the risk to do something different. Many would rather stick to protocol for reasons best known to themselves. Hence you feel frustrated, and so do I, to learn the flip-flop strategy in trying to achieve the mission and vision of the organization, inclusive of the so-called BLUE-PRINT.
I have stories to tell but who would listen......

It is a pity when issues of utmost national important involving future generation, the like of national education, do not seem to be thought of and thoroughly discussed at various levels before implementation. We have too many young people with high academic qualifications but with hardly any working experience. What shows is pure arrogance in not wanting to admit one's wrong.

Waalaikum Salaam NSBS.
We all have our own right to think but to speak out is not necessarily right unless it is directed to the right individual. I sigh and say it out with sarcasm knowing the right people to hear would never want to hear. Once I wrote to a member of a state executive committee, who made his e-email known for people to write to him. Given the opprtunity I wrote something on education, elevant to his area of responsibility. Of course, there was no response. on other occasions, I wrote two private letters to the VC’s of two universities, and personally delivered to their offices. Likewise there was not even an acknowledgement from either of them.

As you said, we have stories ‘but who would listen’. But saying all these among us will tell whether we are all alone at odd or we are with the majority. For this reason I use this forum (blog/email) for my readers to say where I am wrong. In my old job, decades ago I had to learn to speak up or speak down. Only then I had a measure of respect to progress.

Consequently, I consider those people as immature, much needing to be taught their areas of responsibilities and norms of behaviour. I was never in your position of responsibility in the public sector. What little you said rings a bell all right.
Please, email me what else you have. I would love to share your thought and experience.

Assalamualaikum Pakcik!!!
This is idora, do you still remember this ignorant brat? Haha!
First and foremost, I would like to say "I miss you so much!! No, scratch that, it's too much!" I am about to sleep, then I recall back all the memories learning at Al-Manar before. They still bring me to tears.
I am about to wander around your contents first before actually writing you 'my special' letter. Haha. However, when I see the broken English written by your current students, it reminds me of my old me. My old self who doesn't even know what finite verb is, and lots of things I don't know about English. Now, here I am, on my journey of becoming an English teacher. It's embrassing to admit that actually, as my English is still poor. Deep down, I admit, I am not even deserve to hold a degree in teaching English. *sigh*
Dear Pakcik, how I wish I could turn back the time and learn as much as I can from you and how I wish I still could become your student now-even though I am already 'old and rusty'. Haha. I don't mind all the sarcasm because it feeds my brain to think about it.

You would be surprised when I say that you are of those I think of and would very much like to meet. At least send me an sms through 019 9839703 . I was told about you going to be an English teacher. That pleases me, truly. Please sms pakcik.

Thank you for calling here, Idora