Indeed this is not the typical account of an ex-Almanar pupil. The subject of this entry is an old friend, one I would like to remember as a successful individual. Lee Chong Leng went through a long and dark tunnel and emerged to see beautiful sunlight and finally ended his day peacefully, leaving behind a legacy of success. 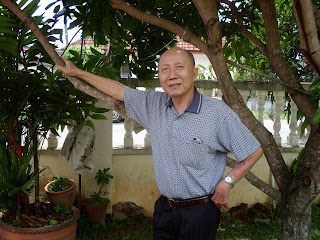 Chong Leng was, obviously, not a Malay, nor was a Muslim. But that did not stop us from being friends. We started as Malayans and ended as Malaysians.

Chong Leng started life in a rather isolated fishing village of that time. Today, Batu Rakit is no more than 25Km by road, not more than 10Km as the crow flies, from Kuala Teregganu city centre.  But seventy years ago there was no road link. Chong Leng, who belonged to a Chinese family living among the Malay community of fishermen, grew up in this remote locality which is, ironically, my home today, also the home of Almanar.

Like those Malay children in that area, he attended the lone Sekolah Rendah Batu Rakit. Today this area boasts of colleges and more than half a dozen schools of various categories. He used to boast of his childhood torturous journeys to Kuala Terengganu. Setting off from home on foot would take him a good five hours to reach a quay-side in Seberang Takir, from where a boat man would paddle him across the wide estuary of Sungai Terengganu. What a trip it was just to get to the state capital. And today, I take no more than half-an-hour in my rickety vehicle to reach the same place.

Life brought us together when, in 1952, I joined him in Standard 7 (today’s Form 3) of Sultan Sulaiman English School. Unlike me he joined the school immediately after his five years of primary Malay school in Batu Rakit.  I went through a different route before joining him in Standard 7.

I think I was drawn to him by his ability to speak Terengganu native dialect as well as his exceptional ability to write Malay in Jawi script. He was proud to show me how he could write my name in reversed Jawi script; from left to right instead of right to left.


That was the beginning of our friendship. And I cannot help believing that his mastery of Malay language was instrumental to that friendship. In the course of conversations it was natural to hear him use such terms as Alhamdulillah and InsyaAllah.

Chong Leng and I were probably the only two candidates (of 37 boys and 5 girls ) who used Jawi script in answering the Malay papers in our Senior Cambridge School Certificate (just SC – the like of SPM today) examination at the end of 1955. Unfortunately he could not satisfy the minimum number of passes from the eight subjects we sat for. In those days, nevertheless, passing Standard 8 ( current Form 4) was good enough for one to earn a clerical job. The standard of English of that era was more than adequate for that purpose. I think one may find it hard today to imagine that in the Malay subject SC exam question papers a candidate had to answer a question which asked a candidate to translate into Malay a short given passage in English, and likewise to translate into English a short given passage in Malay. Perhaps the schools were not called ‘English’ School for no reason.

Shortly after knowing the SC examination result Chong Leng succeeded to get a clerical job in the judiciary department where he worked for many years.

Although Chong Leng could not achieve a simple Grade 3 in the SC examination, he never lacked the determination to see his children perform better. When he was a child elder members of his family, worked hand in hand with local Malays, in making keropok. But his parents, instead of making him an apprentice in keropok industry, sent him to school, to finally succeed in make a living working comfortably at a desk with pen and paper – no longer necessary to clean oneself of scales and smell at the end of each day. Given that chance Chong Leng was determined to improve his children’s lot in life. His son won a coveted scholarship in Singapore to do architecture; a daughter works in a bank after graduation, and a second daughter is a specialist English teacher in one of our country’s top premier colleges for girls.

Would that not be a dream realised? Yes, we joked and laughed the last time I was in his home, though his health was failing him.
XXXXXXXXXX  picture XXXX 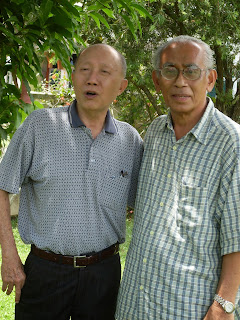 We could no longer enjoy lunching out. But Chong Leng could not be a happier person – knowing that he was out of the long dark tunnel.

Salaam. My spontaneous reaction on reading this is how nice and thoughtful of you to pen pleasant memories of our late LEE CHONG LENG. How I wish the remaining half of our Class of 1955 could communicate among ourselves through blogging, e-mail, F/B or whatever is available via the modern technology which was unthinkable during our young days. Without that modern technology our physical weaknesses prevent us from meeting in person as we used to do.

AK, you know how close I was with Chong Leng, particularly in sports activities. My relay team members were Chong Leng, Sulaiman Mohd (the three-mile champion)and our late Tun A Razak Sulaiman. Now almost half of that group are gone and they include our Ravindran, Prasad , Sarada Devi, Tan Sri AWan Adnan and Dato’ Dr Wee Lian Hong. Oh, what a pleasant memories we have of those people we never talked about racial polarisation. We were just friends, MALAYANS.

I hope you realise that I was the one who took your last picture with Chong Leng shown in this posting?

Dear Pakcik,
It's nice to reminisce on old times where relations were sincere devoid of ills of what we see today. Thanks for sharing.

Thank you for yr latest update, remembering friends. Seriously we are in the same situation, seeing and hearing of one another and visiting them for the last time. I am at the point of completing a photobook of a friend in Kota Bahru whom I know back in 1949. The collections of photos would indeed surprised him and his family, esp those which I think he has never seen. Yes we keep in contact in ways that are made possible. Salam

Thank you for the addition to our memory of our past. Indeed you took the photo and there is one of you and him but I decided not to post that picture because you looked too young and rugged, taking readers' focus from Chong Leng!

I understand your booknlaunch was a great success. I know I missed and am sorry for that. My pleasure is owning a copy before the curtain was raised, a true honour.

Now that you have done one I am sure, like our great Ninot, you would be hungry for more. Well done and good luck, my friend.

Pictures from 1949 make me green with envy. That would be about the end of our primary school ( Sekolah Melayu whateever ) days! Now it makes me wonder if yor roots were in Kelantan. I do not recall you revealing it that fact.

Only very recently I camee to know about this photobook. I still wonder what takes to compile one, effort and cost.Would there be one of your stay at the TTC in England?

Dear Pakcik,
1. Apparently about 70 odd people were there mainly from my old boy's network. Made some sales. Mdm Ninot read my first poetry that I had dedicated to you before, about the 'Little Bird' remember? .Tan Sri Aziz read 'the River' (he's from Pahang and it reminded him of Pahang River) A third poetry 'the Eagle' was read by my 8 year old cucu. He was very confident. All in all it was great! 2. InsyaAllah hoping to compile the 2013 postings for a 2nd one but not quite enough just yet. Salam!

I am sure in time you would be able to operate the special centre. Nothing comes easy, Madam.

Reading this posting of yours I feel blessed that my Seri Puteri (Kolam Air) friends are chit chatting almost everyday with each other and meeting up every now and then, almost monthly!

That being said, four of us have passed on and during the last occasion in 2008, my heart literally broke.

Speaking of fond memories, Sir Hank's book launch was a great success. It being held at the Royal Lake Club I met many friends, including my mentor Jon Azman, my late father's friend, Tan Sri Aziz and of course the happy and gracious host and writer.

It was a bit strange, all these 60 plus distinguished gentlemen calling me Madam here and there. It is strange indeed, as I get this on the poetry blogosphere as well. Either I look old, or I behave in an old fashion manner , I am not quite sure!

Ninot Ma'am,
I didn't know that but I'm not surprised. We,the OPs have been schooled in the traditional British ways that we accord the respect due to one of stature. Obviously the blogosphere community holds you in high esteem too! Nothing to do with looks or fashion (you're demure and charming to mesmerize them with your eloquence, that's why!) Fashionable? of course, I've seen your Zorro outfit in that gathering. Thanks once again Ma'am!

Hank
P/S Pakcik, apologies in using your forum to communicate with Madam Ninot

Dear Pakcik,
Your reminiscence of that unforgettable episode of a close association with a person of a different ethnicity should be the epitome of Sino-Malay relations for the present generation to emulate. It should be publicised for the Nation to see what a role model for good race-relations should be albeit even without the existence of the National Unity Department then. You are truly a gracious individual that our country should be proud of.

I am pleased to hear that you helped to play a central,role in the book launch. Doubtless, you are an expert, having the experience of many years, in literary world and your past working experience. Lake Club was your home, as well as where it all began.

Others have chosen to address you 'mdm'because, apart from your skills, you are older than your beautiful daughters. But you are no older than our own children. So if I wish to be formal I, and Makcik,will address you as 'anak..da Zu...'!

You are welcome. After all Almanar blog can claim some credit for prompting successfully one of the OPs, known for their toughness and disciline, to go soft and pooetic.