Sixteen years ago a skinny little boy, living in a wooden house in an undeveloped area called Bukit Bucu, joined Almanar wiith a group of Form One children. Unlike other boys he was not one who made Pakcik shout for silence, nor was Nazran one of those kids whose behaviour in class had any reasons to be reprimanded by Pakcik. Over the following years our relationship could only move closer.

Five years later I found the two of us sitting in Nuri (Pakcik’s home) to discuss what university courses he should consider. I still remember he was the very first person I suggested a course related to geology, and he pursue along that route, giving me a hope that one day, working for an exploration company, he would be mapping the sea bed off the coast of Terengganu studying earth samples for black gold.

No, how often in life one reaches ‘two roads diverged in a wood’ ( from Robert Frost’s poem ). At one point of his early working life Nazran took a path less travelled by – an employment related to atomic energy. Well, he now knows more than Pakcik on this subject but I know I can liken him to a lonely proton of an atom only to be neutralised by an electron. There he found his match.

Events moved very fast and before I knew it  Pakcik and Makcik found ourselves sitting at a table with two ladies who happened to be colleagues of the wedding couple. 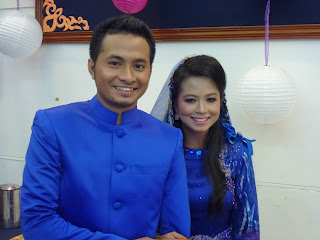 Once a lonely proton and a lonely electron, finally neutralised in harmoniously beautiful blue 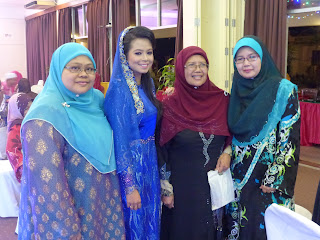 Makcik with bride and her two colleagues

Our congratulations go to this lovely couple. Perhaps, before long Nazran will not be alone visiting us but as a couple walking hand-in-hand with a baby to support as well.

Dear Pakcik,
Another successful outcome and a gem of a person aptly rewarded with a charming bride. Congrats,Nazran!

Truly a beautifully narrated story,declaring AlManar achievement and the children who have graduated. Thanks to your continuing support. We congratulate the couples meaning both of you too. SALAM

Isn't that the path we would like to see our children progress through in life?
Thank you for your continuing support to me. With kind regards.

You have seen many of such stories throughout your professional career. I relish the few I have been able to lend a hand at a late stage as this, and as an amateur. Thank you for coming to visit so soon. Letih Umrahpun belum habis

Salam Pakcik,
Extraordinary work for the last 20 years. Plenty of enchanting, lovely and inspiring materials for for a book on ALMANAR to keep for posterity. May ALMANAR lives forever.

I do not belong to literary world as you do, hence writing papers and books is not my forte. Perhaps one day I may be enlightened enough to think the way you do. Thank you for the kind thought.

Dear Pak Cik,
There is an awesome feeling of achievement in such a wonderful event. May Allah Bless you with more success story.

Achievement is winning the election! And I am not even contesting but dream of doing that, for dream is free.

Thank you for the mail. We, (the older generation,are we?) think alike.

The road from Ayer Hitam to Batu Pahat brings back old and very pleasant memory of those days in the 1960's. It is so pleasant to read about that part of the world.