Congratulations - Poets among us

We are often guilty for taking things for granted, neither appreciating nor giving recognition to what and who we have around us.  Kuman di seberang laut nampak, gajah di depan mata tidak nampak. To be specific I ought to have had the decency to let visitors to Almanar blog know how I appreciate for having the privilege of hosting comments from a number of people who are established in their specific fields.

We have Awang Goneng whom I did refer to on a number of occasions. His two books, Growing Up In Trengganu (GUIT) and A Map of Trengganu are available even in bookshops outside Malaysia. Those who read NST would be very familiar with his column every Sunday.

And we have Ninotaziz who frequents Almanar. Many already know her as a writer and poet. She specialises in ancient Malay legends. Among her works are Naga – A Legend of Tasek Cini, Srikandi and Hikayat; and is forever busy working on more. I spotted her for the first time when I stumbled on more than half a dozen blogs run by a single lady, an amazing feat. I try to read them all leaving aside the one in French.
Coming along as a poet writer is one known as Kaykuala whom I address as Hank. This gentleman, who looks for every opportunity to talk of his wonderful days at the famed Royal Military College (RMC), is beginning to show his many talents, one of which is poetry. Hank’s comments are seen against every posting in Almanar, forever generous in giving compliments.
I like poetry but I find it extremely hard to understand how a poet’s mind works. I often say so in my comments against Ninot’s and Kaykuala’s postings whenever their works sound fascinating ; and poor Pakcik cracking his old and overr-workedgrey mattter trying to grasp the meaning in full. 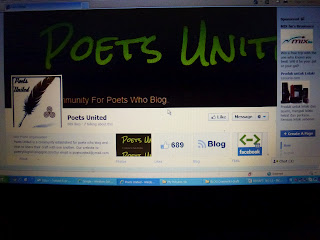 Ninot and Hanks have both been interviewed by Poets United  blog (http://poetryblogroll.blogspot.com/) . Ninot was interviewed on 29th Sept 2010  and Hank on 22nd August 2012 .  Do visit that website to read some highlights of these two poets. Typical of Hank, probably running short of what to say, he tried to pass some credits to Almanar.

I have mentioned three names. I am now beginning to spot a couple of Almanar’s visitors with special talents in Malay poetry. I love reading those poems in their blogs but I can never get anywhere trying as well as they do .

P/S:
In good time we will highlight our other specialists esprcially in education and medicine - not forgetting accountancy.
Berkhidmat kerana Tuhan untuk kemanusiaan
Posted by Al-Manar at 9/11/2012 12:45:00 am

Dear Pakcik,
Thank you for your very kind words. I have felt for a long time that my work might never see the light of day until you came along giving the much needed encouragement. Suddenly, Alhamdulillah, the scene began to change.

I feel very excited to see Sir Hank doing so well in the poetry blogosphere.

Thank you, Pakcik for being there for us.

dear pakchik, thank you for this nudge. i have always wanted to check out the blogs of the almanar visitors but never got around to doing it (story of my life, it seems). but this morning, i plunged in, at the risk of having a mountain of laundry toppling onto my person, and i'm sure glad i did.
i grew up collecting poems, and the occasional sajak here and there, written by other people. like you, i marvelled at how a poet's mind worked (still do, actually). then life got in the way and that passion fizzled.
i am rediscovering that part of me.
btw, i especially like mr kaykuala's poem, 'breakfast'.
i shall visit mdm ninotaziz soon.

Dear Pakcik,
Awang Goneng and Ninot are way,way above as accomplished authors. I'm just a blogger and I'm happy that way. I wish to thank Pakcik for being there for us. Thank you Sir!

It is very garcious of you to say what you said. No ome can claim any credits for your toil and sweat - just HIM.

Keep going, young lady, with the hope that at leadst one of your four 'I's will prove a chip of her mother kayu chengal, hard, beautiful and durable.

Almanar is a one of thousands of blogs. Remember the saying; a big fish in a small pond. Soon the fish will grow too bug and will have to find a bigger pond, or into the sea to fight the sharks. Persevere and succeed, Hank. I wish you all the best.

You are my new 'discovery'. I am glad all this while you have decided to run a blog. You can never go wrong in the company of our visitors here. One of these days I will write a 'special feature' of 'Nali the supermum', not superman!

You will be so busy that you will need a super washing machine for your home.

Surely am proud of my friend Ninot's achievements to date. Wishing her well on her future projects.

All the best to Kaykuala too..enjoy your writings.

Anyway...hope all's well with you and mak cik..sorry that I haven't drop any lines here for a while though I do check in once in a while.

Btw..so glad that I at least had the chance to meet up with your daughter over Raya.

One of five 'I's Pakcik!

The traveller has returned! It was a hope agaist hope that she would turn up on a 'hari baik bulan baik'. It is nice to see you again. I wonder how sure you are of my daughter; as charming as her father nor mother whom you have never seen?

Your hari raya picture shows N,R and 5 'I's. Are there 5 'T's hidden away somewhere? In one of your blogs I did ask what made you choose all 'I's but never got an answer. I have all 'A'S, not counting my home and my little school.

Dear Pakcik,
I am sure your all As originated since your school days long ago!

Okay, this is a L-O-N-G answer in full length - the unabridged version since you asked twice Pakcik. I di not answer the first time, because I thought it would only interest me.

First born is named Natassia Iman. The Na infront of the name is a dedication to me who is called Na by those who are closest to me. The name Iman is because I love its meaning (faith) and also, Iman was a very beautiful model back in her heyday. Iman was quickly followed by

I had called the the Embassy of Saudi Arabia and they suggested Inas as it meant (according to the officer I called) 'Friendly' Inas is also the 'name' of the very beautiful French Chanel model Ines de La Fressange.

Irani is based on Rani or queen. At the time, the Malay beauty was Erra Fazira, so I figured I must have a Malay beauty in the family.

This name came to me while watching the movie Troy, I must have been seven months along. Ilena is another version of Helen - so she was named after the beauty that launched a thousand ships - Helen of Troy. Nadessia Ilena I am told actually means Hope and Light in Greek.

A good friend of mine, Mak Ungku Raja Teh Zaitun asked that this baby be named after another queen and beauty, Nefertari. But I kept the prefix Na at the beginning. I was running out of names starting with I which I liked. Suddenly Irani came up with the name Akasha. This quickly evolved to Ikesha.

Ninot Ma'am,
Interesting shots! Gosh! You have them all worked out. I wonder how Ninot was evolved. I can guess but tell us!

Through you, Pakcik, I've 'discovered' extremely brilliant diamonds, the three u mentioned here and many more. Tq for the intro and Assalamu'alaikum, nice to meet you : ninotaziz, kaykuala and awang goneng, sirs and ma'm..

Nice to meet you Mama Tim. I love your Gganu shots, make me want to go back soon.

The name Ninot is courtesy of C-f-S's Mama more than three decades ago. Like NST photo archives, the older the story, the more expensive the cost. I am afraid if you want to know that story, you will have to supply the C-f-S bloggers with tonnes of tuna.

I am sorry to have brought you into this mess of bargaining for what Ninot is and how Ninot came about. Don't let these ladies take you to the cleaners. I know what NINOT is and I will tell you privately for a small fee, not tons of tuna.

Thank you for revealing what lies behind the 'I's. It is more intricate that I thought.

I am glad I have been of help to introduce you to these interesting people.

Mama Tim,
Pleasure to meet you, Ma'am! Do drop in to Rainbow whenever you can spare the time. Thanks!

Ninot Ma'am,
Ninot has a nice ring to it. 3 decades ago did you say? Then my guess has elements of truth in it. Yes, Ninot conjures that picture of a manja, a homely, demure and an innocent little lass of decades ago!

That reminds me! Got to make visits to CiS's Mama more often too, with loads of tuna!

Dear Pakcik,
A good reminder from Ninot. I've visited CiS's Mama only once these few months.


Hank
P/S There are many other felines besides CiS. Got to get used to their names also.

Great article. I've enjoyed this contribution. Its nice to see every questions answered in a blog post like this. I will add this post on my blog and link to it. Thanks for a clear informative post, I've learned a lot. I hope to see videos though as I can be A.D.D and reading articles is not my favorite thing to do online. So what I do sometimes is just print the whole thing and read offline.

Do not feel guilty over acts you failed to do for felines. I visit and look at them but I do not comment on them. I am a human upstart, denying that humans are also animals! I look at the human side of C-f-S with high respect and admiration, hence my continuous visits there, commenting on the sterling job the couple do.

You have a blog. Please let me know here or by email to me on : almanar@pd,jaring.my

Pardon my ignorance. What is A.D.D ?

Please drop in again and leave your visiting card.

Dear PakChik, this has been very interesting indeed. I always go to your comments section after reading your posts. After a time, I could feel a certain familiarity with the regulars here. It's a lot like having an extended family in here (like I don't have enough of my own, right PakChik?)

That 'certain familiarity' unfortunately has a slightly negative effect. Some visitors shy away from leaving comments because they feel they may be breaking into an exclusive group. I keep telling them that we are not exclusive, but the atmosphere is such that each is free to express. I would only place a bar when I see f/b language, a four-letter word etc. We are informal but not without certain decorum. Proper slang is acceptable brecause it a way to break the monotony, so to speak.

If I may add, I have sought a few bloggers who are expert in Bahasa Malayu to join in, bringing along their pantuns etc so that we can enjoy them.I for one, being atrocious at my own language, welcome these people so that I can learn something.