All in the Family (Pt 4) – A Midnight Journey

Muslims have just been refreshed with the wonders of Prophet Muhammad’s Midnight Journey. This posting has nothing to do with that mother of all journeys – but it does spiritually taking journey in its broad term.


It was just a few seconds past midnight. Still wide awake and sitting on a chair I had a story book in hand. Suddenly Ning’s ( my ‘sleeping beauty’) phone rang. “At this hour, it isn’t likely to be light and breezy,” I told myself. I was all ears for what was coming.

“Ya, Ki ? ” was her acknowledgment. That was her sister, Zakiah. The next response sounded more alarming. Then I knew it was not good. Their brother, Harith, 63, was found unconscious while resting at home and they were all waiting for the arrival of an ambulance. Hardly ten minutes later came another call, one that told us what we most feared. It was another death in the family.

Ten months ago, in the very morning of Hari Raya, with visitors beginning to arrive, we received news of the demise of Ning’s mother, Pakcik’s mother-in-law, a wonderful 88-year old lady who chose to remain a single mother for 54 years to dedicate her life to look after her four children.( Click here for the 2011 Hari Raya- not-to-be ) Much earlier, a few months before Merdeka celebration in 1957, Ning’s father died at 39 at a time when the years ahead were full of optimism. 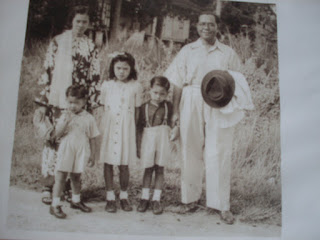 Taken in 1951
The initial family of five - two plus three (before the arrival of number four)
Ning (centre) and Harith,the little one on her right

As a result of that untimely death during our Hari Raya last year, we spent a good seven hours on the road beginning at about mid-day. This time it was a similarly long drive along the same route but beginning at midnight; and this time I had to be extra careful not to be overcome by sleepiness with my ‘sleeping beauty’ beside me. Just before five thirty I was finding it hard to keep my eyes open. Since we were then fast approaching a ‘Rest’ area on the Karak Highway, a quick decision told me to swerve in. I got into one of the many vacant parking bays, leaned my back and had a ten-minute shut-eye. Then we said our Subuh prayers and preceded peacefully with me, the driver, now fully awake and refreshed after the short nap, the ‘wuduk’ water clearing the cobwebs and the short religious ‘exercise’.

So Ning has lost one of her three loving siblings. It was painful for me to see the initial shock she had to go through yet again; knowing that she had lost a father 65 years ago, a loving mother last year and now a brother. (Incidentally, this seems to suggest that one day I should have a posting on an old book, ‘Tiga Beradek di England’. This small book was written in a child’s language as narrated by a little girl about her sea journey to England in early 1951. ‘Ning’ was supposed to be the little girl narrating the voyage.)

So, as one can imagine, this is a segment of Pakcik’s ‘All in the Family’ series which I have created without any intention of glorifying any achievements in my family. I wish to record selected events or milestones in my journey through life; a journey unlike any other journey with an ETA – expected time of arrival. Just be prepared for the real one that is sure to start, with a fixed schedule but undisclosed ETD – expected time of departure.

On a surprise note - I was indeed surprised to note that Ning IS the 'little girl' whose narration I read over and over again in my favourite book "Tiga Beradik di England". Fancy that! (Somehow your story-telling has some similarity to hers, in a more matured way of course.) I'm so happy that I have found out the author finally. Here's wishing you and Ning happy days ahead. Panjang umur dan diberkati. Hope to meet you both in person someday, insya Allah.

Dear Pak Cik,
Sadly you had narrated the passing of three members of the family. Al-Fatiha! We feel just as much for your family!

You brought us along on your nostalgic journey on receiving the sad news. Poignantly portrayed where only a first person narration could give.

Your last para was what I thought was long in coming. Your decision would affect all those following your blog.You had hinted in your previous post but now you've confirmed it. That you'll be giving us the privilege of your 'life's journey' in little doses forthwith. And you're going to adopt a similar format which is perfect! It's most welcomed, Sir! We certainly look forward to it.

Hank
P/S Black and white snaps are precious. They're difficult to come by. The more the better!

Alfatihah..
I would also like to say Alhamdulillah as Allah has given Bang Hassan the strength to drive all the way from Kaalang Maras to KKB?.. With just a 10 minute nap.. Way to go young man;)

It is a small world, isn't it?
The book was written by fer father on her behalf half a century before 'Bahasa Baku'. Hence watch the the old 'beradEk' with E and the new 'beradIk' with I.

You always have all the encouraging words for me, Akhil Aziz. Thank you. It is not always easy to be our true selves when we write. We will try.

What a coincidence! Sadly, I also lost my third child Muhammad Shahir on that month of the year. To be exact on the Aug 27th, 2011.

Pakcik, it is always sad hearing the news of family members or great friends being called back by Allahswt. Esp when yang pergi tu saudara seIslam, w'pun tak kenal, rasa pilu menusuk sedalam2 nya.. I pray they're all placed amongst the pious, amiiin...

Yes, I remember leaving a rather long comment against your posting on the demise of your son. These are unforgettable occasions in our life.

Thank you. These are moments we cannot avoid having to face one way or another.

I always wondered and said to you how you managed to keep/get information. I suppose this is one of the essentials to qualify becoming a good professor.

Thank you for the information.

There is absolutely nothing special about that simple book for children. One thing that surprised me was when I found out that in 1960's this simple Malay book was widely used by those giving private tuitions to new expats on arrival in Malaysia. I suspect those tutors were teachers trained in Kirkby where the writer of that small book, Sulaiman Hamzah, was a lecturer, a well known Malay scholar during Za'aba's era.

Dear Pakcik, takziah for the passing of your brother in law.. al-Fatihah.