Moment to Reflect ( Pt 9 ) – Leopold Weiss and the Quran

Just over twenty years ago ( Feb 20th, 1992 ) died an extraordinary person who accepted Islam and whose translation of AlQuran has been a major book of reference to many. In 1900 Muhammad Asad was born Leopold Weiss, the son of a Jewish barrister and grandson of an orthodox rabbi. He was a confidant of many major Muslim figures of the century including King Abdul Aziz of Saudi Arabia. He was given the citizenship of Pakistan for his contributions to that country. But this great Islamic thinker chose to die in near obscurity in a small coastal town of Spain, about 500 years after the expulsion of the Muslim Moors and the Jews from Spain.
Three months after his death ( may Allah bless his soul for all his contributions to Islam) I bought the book ,The Road to Mecca, a book I dearly keep ,written by a man I greatly admire.
One very fascinating aspect which triggered his acceptance of Islam was the way he discerned the words of Quran expressed in the faces of distinguished looking people traveling in the Berlin subway. In brief I will take excerpts from that book. 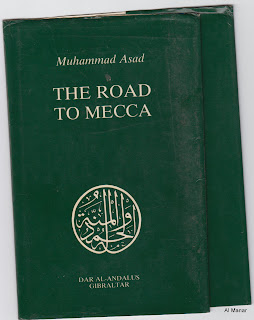 __________________________
In Sept 1926 traveling with his wife, Elsa, in the Berlin subway Leopold Weiss’s “eyes fell on a well-dressed man with a beautiful brief-case on his knee and a large diamond ring on his finger,” representing “the picture of prosperity which one encountered everywhere in Central Europe”. But the man’s face did not seem to be “a happy face. He appeared to be worried.”
Leopold Weiss turned away from looking at the man and saw “ a lady of some elegance. She also had a strangely unhappy expression on her face, as if contemplating or experiencing something that caused her pain: nevertheless, her mouth was fixed in the stiff semblance of a smile which, I was certain, must have been habitual”, said Leopold Weiss.
Looking around he could see faces in every one of which he “could discern an expression of hidden suffering, so hidden that the owner of the face seemed to be quite unaware of.”
He mentioned to his wife the impression he saw in those faces. “She too began to look around her with the careful eyes of a painter accustomed to study human features.” His wife concurred.
When he returned home he happened to glance on the copy of an open Quran lying on his desk. On picking it up to put it away, “and just as I was about to close it, my eyes fell on the page before me and I read: 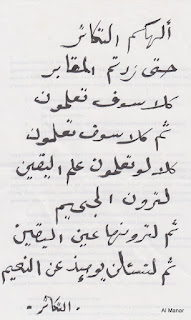 Surah 102 : Verses 1 - 8
‘You are obsessed by greed for more and more
Until you go down to your graves.
Nay, but you will come to know!
Nay, but you will come to know!
Nay, if you but knew it will be the knowledge of certainty,
You would indeed see the hell you are in.
In time, indeed, you shall see it with the eye of certainty:
And on that Day you will be asked what you have done with
The boon of life’ ”
( Surah 102: verses 1-8)
He went on to say, “ For that moment I was speechless. I think the book shook in my hands. Then I handed it to Elsa. ‘Read this. Is it not an answer to what we saw in the subway?’ ”
To Leopold Weiss “it was an answer: an answer so decisive that all doubt was suddenly at an end. I knew, beyond doubt, that it was a God-inspired book I was holding in my hand.” He accepted Islam and became Muhammad Asad.
_________________________ 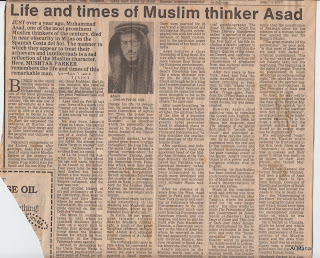 Dear Pak Cik,
I really treasure your stated efforts in making us aware of this Islamic thinker.It opens up a treasure trove for us to delve more into this. Thanks for sharing!

AsSalam Tuan Haji..terima kasih with this posting.
I didn't know of his existence until today.
May Allah SWT bless his soul and place him amongst the solihin.
Ameen.

As a journalist this exceptional man spent years around the deserts, living, learning and understanding life in the deserts. He claimed that Al Quran was brought down in a language that the desert Arabs must understand, admire and believe in. Hence his interpretation of this holy book came from the genuine perspective of the desert people; hence my great admiration for this great personality.

Dear Hank, I wish to share this with my visitors.

WASalaam puan Mamasita. Asad was a journalist for German periodicals and spent years roaming Arabian deserts, learning and understanding the lives of the desert Arabs. You are in a better position to understand the characters of such a person who is successful in that profession.

Yes his wife accepted Islam. His only child, Talal from his second wife, is an academician, a writer.

Read the part that you has posted before from the internet about Muslim Convert or Muslim Revert.. but have yet to complete reading the book.
May Allah's Maghfirah and Rahmah be with you and all Muslims

You are lucky to have access to a university library. Of course when one is flooded with books one keeps procrastinating from one day to another. I may seek your assistance in searching certain books.

Are there, by any chance, books written by Muhammad Asad's son, Talal Asad, an anthropology professor of a university in America? If there is any please email me.

Kassim was much talked about some twenty years ago, being projected as a radical and controversial figure, especially in the subject of Hadith. I know he has written books but so far I have no inclination to read one.

Personally, having limited time to read endless number of books by renown authors, I tend to side line religious-related books by controversial personalities. I gave exception to one or two figures one of which was Rashad Khalifa, the person who, over twenty years ago, used computer to discover the magic of number 19 in the Quran. I even keep a copy of his translation of Quran. At times I feel like writing about this magic figure but have held back because of the controvercy over his personality.

We all suffer from this kind of weakness - inability to fastidiously finish a book, jumping from one to another. At the same time we keep on fancying those on the bookshop shelves.

Are you in Terengganu? We hope to drop by over the weekend.

Was not sure in the beginning as the kids were having fever and flu. But Alhamdulillah, they were fine yesterday and today, so we thought - it'd be a nice drive...

To this great human being, AlQuran was what the Book should be, an absolute book of guidance.

I pray and hope to achieve this. It starts with understanding the words, then the meaning, then the teachings.

It is, indeed, an absolute Book of guidance, with endless mysteries only some of wwhich are beginning to be understood by human. Let us hope that we do not deviate too far from its beam of light in our preoccupation with our daily activities.

Yes, we are home until the fourth week. Welcome.

What a grand post Pakcik. TQ for always having the spirit to share and teach. I'll look up more of this great man, my curiosity now perking!

I like to share what I have personally experienced and what I know and practice. There is limitation to that and I beg to be excused fore my shortcomings

I've read Road to Mecca too! but only about 5-6 years ago. So beautiful written I felt like I was reading a book with a very long poetry. I love the book.

Islam at the Crossroads is the other book that I really like too - I think I've read it 3 times to remind myself of our situation - more and more so during these times when I see a lot of youths drowning in western culture.
May Allah save us all.

I treasure all his books as well. Thanks for dropping by