The sound of an incoming sms woke me up. A message at 1.13 am was not likely to be a good news, unless from another time zone. The message read, ‘Ayh sy meninggal dunia 12.33 am.'

Only then I noticed an earlier message which read, ‘ Salam pakcik. Ayah sy tenat.’ It came at 11.20 pm when I had just retired, too tired to be awakened after a long drive from KL.

Those short messages came from an ex Almanar pupil who regarded us as her second parents. Early this morning we went to her home and at 10.30 I went for the prayers to send off a very dedicated ‘bilal’ of a mosque here. The girl will, insya Allah, be a subject of my ‘End of the tunnel’ series.

The deceased, whom I knew well, has left without a chance to have the worldly satisfaction of seeing the success of his beloved daughter. Alfatihah to this wonderful man whose passing should make his loving daughter realise that he had not lived for nothing. She has a debt to settle.
_____________________________

As I was driving home from the funeral, feeling sorry for the now fatherless girl, I decided to sit and post a new entry before the end of the day, perhaps another of the ‘End of the Tunnel’ series – but not about the bereaved young lady mentioned above. I will pick a boy whom I call Syami. 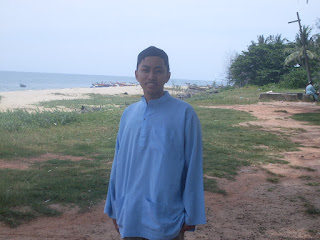 The boy from Batu Rakit
Not so long ago this boy, Syami, came over to Nuri to hand a wedding invitation card. No, it was not his wedding as he passed his SPM just a year ago. The card was for the wedding of one of his three sisters, he being the youngest of four children from the same mother.

When I first knew Syami seven years ago he struck me as a high potential and a determined boy. Life was not easy for him, his mother selling nasi lemak to raise five clever children. Circumstances brought Syami and Pakcik close together and I was able to counsel and speak freely to him.

I remember how, during the year he sat for the PMR exam, he had to spend a lot of his time helping classmates rather than for himself, a good quality which might not do justice to his own need. A number of his friends did well in that exam; and as I expected Syami did very well himself and that earned him an offer to join form 4 at a premier secondary science boarding school in Kuala Terengganu. When others would jump with joy, he did NOT want to accept the offer!

I was pretty sure had he continued at his old school he would succees to lead his class and continue to be haunted by his class-mates for help. This was a case of a big fish in a small pond, feeling very comfortable, completely oblivious to the great competition among the giants outside. He was certain Almanar could continue to help him through. Pakcik had a hard time to persuade that young boy to leave his comfort zone. Thank goodness , in the end, he grudgingly took my advice.

Hardly three months later, he came around to admit feeling rather ‘small’ against the giants in his class, especially those from schools in the West Coast. That challenge made him produce his best.

Three years has gone down the line. Today my Syami is attending a two-year course leading to Cambridge A Level exam. He has to take German language as he is slated to read engineering in Germany. He knows he has no alternative but to make it if he wants to go forwards; but this young man seems mentally prepared.
______________________ 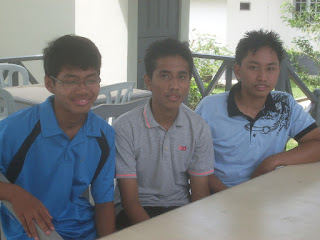 Syami (extreme right) and two classmates
Syami’s family is no longer what it was because his elders, given proper education, are earning good money, thanks to their mother’s tireless sacrifice. If for a long time the great mother enjoyed no luxury, today, according to Syami, ‘She can boast of having a ring on her finger.’ Her children have made her stop selling nasi lemak.
________________________


Both Makcik and Pakcik, as a matter of course, attended the wedding of Syami’s sister. At the end of enjoying our food, and as we were leaving for home Syami came to say that her mother wished to see Pakcik before I left. So I went to look her up. The moment she saw me approaching she left her lady guests. What she had was just to express her thanks for what I had done for her son. “ Kalau ada apa apa masalah saya selalu suruh dia jumpa Pakciklah ( Whenever there was a problem I would normally ask him to see Pakik)”; a compliment I least expected from a wonderful mother who could now smile with a ring on her finger.

Takziah to the family of the deceased. A good man and a good father: may Allah reward him with Jannah.

It is so heart warming to read stories like Syami's. There is truth in the saying that if you teach other people you too will take in as much as you give, and more besides. Syami has benefitted from that. I hope he will prosper in Germany and will come back to pass on his experience and knowledge to his fellow kampung folk. Thank you Almanar. May God bless all who sail in that good ship.

I'm overwhelmed, Pak Cik! Simple folks who slogged away their sweat and tears to see their flesh and blood do well. Given half a chance and the proper lead by alManar made these students good examples. Syami will do well! Alhamdullillah, I'm glad!

Dear Pakcik,
In years to come, we hope to hear of Ir Syami.... al-fatihah to the young lady's dad...

On another note, we may find our way to your shores again. There's a book "debt" we want to honour. purrr....meow!

I did not say so, Mi, but through the experience you must have observed during your earlier career at the university, you picked on the benefit gained by Syami in helping his friends. In deed he benefited from that.

This fact was noticeable in the case of another success story, that of the ex Almanar who is now reading medicine in Russia. He was one who was adamant that he did not want to move from his old school into a better school. Almost every day he had a ring of female classmates surrounding him in one of our 'syndicate' rooms at Almanar. Because those friends threw at him difficult questions the process became his way of revising those subjects.

(Now I wonder whether he has a ring of Russian girls and, later in life as a doctor, rings of nurses and female patients to examine him or be examined!)

Realising this phenomena, you take in as much as you give, I have tried to encourage pupils to form study groups at Almanar. It is not very successful due to a large extent to the pressure in school; that they attend extended 'kelas tambahan' which the more advanced pupils least need at the expense of their limited time to study on their own the subjects they most need to spend time on.

In a rural environment there are many cases like this but helps are not forthcoming. To my mind the schools are being straight-jacketed to do just what their so-called 'formats' dictate them to do. I make many raise their eyebrows when I speak out my mind. Not being a trained teacher one seems to have no credibility. Now we will see what those imported American volunteers can do in the rural areas. Will they sit eating sambal belacan and take Terengganu budu?

Alhamdulillah on Syami's and his siblings successes.. Alfatihah for the deceased father..
Thank for the heartwarming entry..
I am delighted at the pride of owning a ring..
I know I can also relate to that.

As usual, Akhi Pakcik, avery touching tale with a lot of light at the end of the tunnel. Helping those in need of help is certainly a most satisfying act and those presented with the opportunity to do so are also chosen by Allah for He knows who will honor His trust.

One day I'm sure Sham will return from Germany as a full fledged engineer and his mother, god willing, will have another gold ring. Amin.

2 days ago hubby and I thought of visiting a very kind bilal we just befriended since about 6 months ago, whom we last visited about 6 weeks ago. Hubby gave him a call, to see if he's home yesterday. The phone was answered by an unknown voice, a nephew, telling us "Pak Din dah tak dak, dah meninggal...". Hubby, terkedu a few secs then asked "bila?".. Answer came, "dah sebulan.."

Book debt ? I want money, lots and lots of it, please.

Let's hear about that ring some time - a special posting, please.

Akhi, this sort of story, or the potential of it, is abound every where in our country. I am sure many teachers in schools are doing that without anyone writing about it. We all can help in our own little way.

Wahat a coincidence that is. Begitulah hidup ini sehari ada sehari lagi hilang. You can write a nice postimng about that bilal, I am sure.

So a simple kampung boy, from a poor family, is going to Deutschland to get the best of German engineering. Another impressive achievement by AlManar, and lot of light in the end of the tunnel for this young boy. Having worked with a German company, I am always impressed with German engineering, and hopefully the boy would get the best there

Is it true that a poet is a sentimental animal? I have tried to be one, sadly in vain. Your children are lucky. That much I can say.

My impression of Germans ia that hey, the manfolk, are very tough and rough, compared to Asians. I suppose you have worked with their enginneering/electronic. I was for a short period working in Dusseldorf. They were disciplined lot.

PakCik,
May ALLAH Bless the soul of deceased and place him amongst the pious. As for Syami, I am happy that the German course is continuing. We are not like the Indonesians who send their students by the hundreds and one of their alumni is none other than Habibie. Maybe Syami will follow his footsteps and excel too.

It is nice to see you around, akhi AHS. You do ntseem to be updating your site as regularly as you used to. Hope all is well.

MARA seems to continue doing well in educating our young ones.

may he rest in peace..i mean the muazzin...

Ameen. Thank you for the the prayers.