I think we have had enough of dreams, and should step down to earth, and watch the real objects around. I happen to see plants in the grounds of Nuri, our home. Among many plants are pots and pots of a kind, according Makcik, called aloe vera. It sounds exotic enough and I dare not argue with her, not within my area of expertise. But I am certain there must be scientific names which may sound even more exotic. 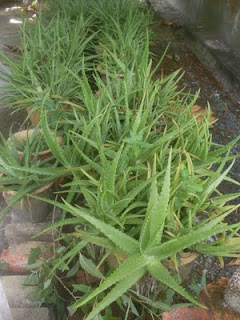 Makcik has her pots, certainly more than twenty, on the ground, 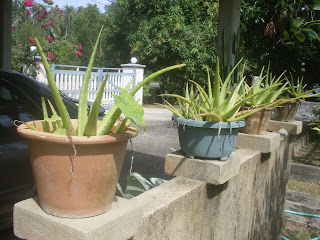 on the edge of low brick walls and 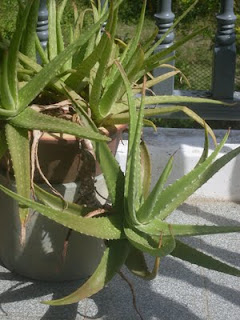 even on the floor of our verandah.

I presume it all started with one pot many, many years ago. The one plant must have 'beranak', multiplied. (Incidentally I read in the paper that the new edition of Dewan Bahasa Malay dictionary, which is already a kind of English 'rojak', will have many foreign words, enriching the Bahasa Melayu - so it seems. I dare not laugh. If now we are wrestling with poor standard of English in Malaysian schools, we will soon have poor standard of Malay, a kind of ‘global’ Bahasa Melayu, no longer bearing any resemblance to, or traces of the celebrated Wilkinson’s or Pendita Zaaba’s. To reciprocate, I expect the Oxford or Cambridge dictionaries will also adopt many Malay words of 'taraf antara bangsa', like 'beranak' or 'beranuck' , the way they have done with Malay 'amok' , also spelt 'amuck' - I suppose depending on whether it was spoken by Irish or Scottish English inn those colonial days.

Now, let's get back to Makcik's aloe vera. I would like my learned visitors, who are expert on plants (the like of my respected Tuan Temuk), to tell me two things:

a) Can aloe vera be turned into an edible dish instead of just a decoration?
b ) Does aloe Vera have flowers?

I do not ask a third question which concerns uses of aloe vera for its medicinal value as I have noticed a kind of cream in tubes bearing the word 'Aloe ...'. It may even be something to enhance the beauty of old and wrinkled skin. But please tell me about it anyway. At my age I need all the tips to remain beautifully wrinkled and ‘kuat’ ( the latter to run the tuition classes, mind you) - to be in English dictionaries as 'kowhat' or 'quact'.

Till I hear from you, I rest my case.

Selamat berpuasa and Selamat Hari Raya, including my friend Sintaitai.

Masa dulu.. orang kita panggil aloe vera ni "lidah buaya .. dok gittu?"
I guess we will have to wait for some expert to talk on this subject.;)

Aleo vera juice is good for those who have gastritis. It has been proven to help the replaced the lining of the stomach, thus cure gastritis. I am taking a daily dose every morning on an empty stomach. And it has help me to get back to a normal stomach.
5 hours ago · LikeUnlike.

BTW you can the pure clear juice that is processed in NZ in any Phamacy. I am using the one under brand 'Lifestream]
5 hours ago ·

My late grandmother had aloe veras lining up her huge staircase. She will get rid of all its anak so that only one aloe vera grows in each pot. I have done this as well so some of my aloe veras are hugh about two feet high. On your questions:

a) Can aloe vera be turned into an edible dish instead of just a decoration?
Yes, or rather a drink. Like cincau.

b ) Does aloe Vera have flowers?
Yes, though rarely, mine flowers once in three years.Sometimes five years.

Ikesha, my five year old, automatically takes Aloe Vera to cure cuts. She has sensitive skin so sometimes I lather her in aloe vera while having her bath. I use Aloe Vera in my hair. And on my daughters' face. Mine too.

Apparently, Queen Cleopatra used it for beauty purposes. Now I am certainly no Cleopatra but we do what we can.

Dear Pakcik,
I happen to have a picture of my Aloe Vera flowering in 2009 on-line here - http://ninot-s-herbs-in-pots.blogspot.com/2008/10/monthly-feature-october-harvest.html

It was early days, the flower turns white eventually.

I think we are beginning to get some feed-back, especially on the medical side of it. Do you not think this can be organised on a large scale? I see commercial value in this Ayah Wang.

Thank you for offering an answer to a medical value of this plant. (1) Gastritis

We will see what else will be disclosed.

We will keep counting the uses. I wonder how you prepare the leaves to make a drink. Do we just blend it and add suger? I am sure you have to add something to get rid of its bitter smell.

Dear Pakcik,
For all uses, I peel the skin and use the jelly like flesh only.

Tuan Al-Manar
There you are, so many have correctly answered your questions on the beautiful lidah buaya plant, well ahead of me. They probably know that I do love plants, but have terribly little knowledge about them! One of Ninotaziz's 2008 entries showing the flowers of lidah buaya is greatly appreciated. Lidah buaya certainly has a lot of potential as medicinal plant, but I doubt whether it will be a popular food item. I find its clear jelly, cut into fine pieces and mixed with cincau, tasteless.

Thank you. May try some time. It does not look appetising though.

If Ninot says the stuff is good for hair it must be good for you unless its reaction on non-human is all hair falling off. Ha Ha kucing kulit berkilat takdok bulu.

This plant seems very common after all. Everone knows it and its applications too. I asked whether this plant has flowers because, after some ten years, we suddenly a stalk shot up without our notice. I will post the picture in a couple of days' time.

Pakcik, while waiting for berbuka I took some photos and did a post inspired by you here :

I really liked the article, and the very cool blog

i am so honored to receive your visit to my humble blog. Thank you for leaving your trail.
I am now making a return visit, and immediately become hooked to yours.

I am glad you choose to join my small community. You are very welcome to call at any time,and comment. I appreciate equally well any constructive criticism.

I did sent you an email. Hope it got to you.