One afternoon early this month, having no Almanar class to conduct, Pakcik decided to sit and go through a small box of treasured ‘junks’. Among some old letters I stumbled on one handwritten letter in jawi script dated 4th Sept 2003 – more than SEVENTEEN years ago. It came all the way from Sydney and was signed by Abdul Malek Yusuf. 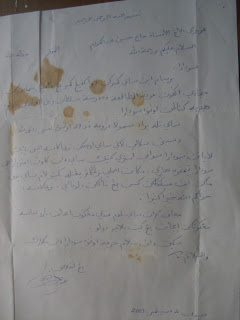 Enclosed inside the same envelope was a photograph, obviously taken in a photo studio, showing five young boys dressed in all-white school uniform. The accompanying letter said that the photo was taken way back in 1952 – more than SIXTY years ago. 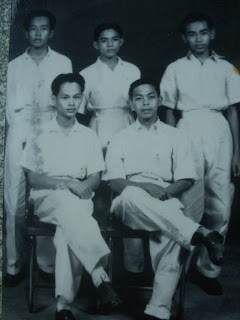 Seeing the photograph my memory flashed way, way back to the distant past. I could see a school library which had just been officially opened with the five boys appointed to be the first group of school librarians.

Then I had an idea that this could be a subject of my next posting. With that thought in mind I had the letter and photograph placed temporarily on one table.

On April 9th Pakcik had my second posting on durian tree and what it symbolised to me. Among the first few visitors was an anonymous who left a message saying, “ I just heard the news that your friend Ustaz Absul Malek (in Sydney) telah kembali ke rahmatullah. Al Fatihah”

That brief message truly shocked me, coming so soon after I had just read his letter and seen the very old picture which he chose to me, for safe keeping perhaps. From my responses in the following days visitors might have sensed my mood.

I am ever so grateful to Ninotaziz who, in her typically unique style, chose to leave the following short poem, to which I immediately responded in my amateurish way.

I was then looking again at the old photograph. Ustaz Abdul Malek sat on the left and Pakcik stood on the right.

What made me especially sad then?

Of the five in the picture, Pakcik ALONE remains the only durian of that season, hanging on precariously from a branch.

Now I say Alfatihah to the fallen ones – will be joining them in due course, for sure. Durian seasons come and go ….. and the ‘good word’ (of my earlier posting) is Lailaha illallah.

2) Coincidentally, yesterday I made another 500 km drive to this kampong because of an unexpected death in the family. So I am Here again waiting for the last few durians of the season to fall.
Posted by Al-Manar at 4/21/2011 01:11:00 am

I remember Ustaz Malik very well - he was quite a central figure to the Muslim/Malaysian students (and non students) community when we were in Sydney in the 1980's. many a time we were at his house, enjoying Malaysian hospitality, (spelt Malaysian food!)Semoga Allah cucuri rahmat ke atas ruh Allahyarham dan memberi kesabaran kepada keluarganya.

Past generation who planted durian trees, for anak cucu, the next generation, to savour the fruits.
Keep sharing, Mr AlManar.

Your postings are like the seeds of awareness, Pakcik. That will remain in our conscience for a very long time.

In that, we are very much like the students at Al-Manar.

Dear Pakcik,
It's uncanny isn't it? You knowing Ustaz Malek in his early years while I only got to know him in his last years...and we meet in cyberspace often... Oh, ever heard of the phrase: saving the best for last? That, I think, aptly describes you. purrr...meow!

Wan,
I am glad this posting has, somehow, reached you, someone who can claim to have met Arwah,a wonderful person in life; and we hope will be blessed suitably for the goods he did.
I wish I know who you are, to have been drawn to meet Arwah.

A few days ago I read with interest what you wrote about the workshop where you met the writer of the book (one of his several) I read some time back. I held myself back, for later, from leaving a request for a set of the said photocopies meant for your pupils. They may be of help for mine as well.

Thank you for dropping by.

I half-expected to see your appearance and dreaded the thought of seeing another poem; not for its lack of beuty but for self-imposed obligation to 'perah otak', yet fail miserably, to reciprocate somehow in the same manner.

Thank you for your inspiring 'good words'.

You see I have made doubly sure that it is 'from' and, with sense of pride, no loger 'in' - not that I am ever kind to cats of different kind meowing around my house.

Like that lady poet above, you have a way of making an old fellow feel appreciated.

The lady poet and the cat have said it all.. mintak mintak durian yang tinggal tu dapat bertahan lama.. being close to South China sea, my father "bertahan" till 95 years young.. outlasting most of his imams in most of the mosques that he has frequented.

Abdul Halim Shah commented on your note "Pakcik reminisces ( Pt 16 ) - Durian semusim gugur semusim".
Abdul wrote "Pak cik Hassan, it is profoundly touching and May Allah bestow upon Allahyarham His Blessings and place his soul with those who were pious."

I remember seeing your mention of your dad's age to a blogger who lamented about his age. Well we all aspire to be blessed with extra days, bonus on top of bonus! Kadang kadang macam tak sedar kediri pula, betul tak? Your dad lived long enough to see the fruit of his labour. May Allah bless his soul.

Akhil aziz, to borrow my late friend's way of starting. At our age we know wnd feel it.

I am sad too to hear fron you about the demise of my old frined, Mustapha. We had a couple of years together in Sabah, he (with family) in Tuaran and I (with family as well) in a far away place, then known as Jesselton. That was 45 years ago! His association with my other half and her family begang even futher back in Kirkby, about 60 years go! I should do another posting on this, insya Allah.

Alfathihah to those who have left before us.

I will send you the notes.

I will be indebted to you. Thanks.

Further reading of your entry, indicates that you are likely to be in Kalumpang (but for how long?). Hopefully everything is fine at rumah Che Zan..
Salam dari Ayah Wan sekeluarga to you and Kak..

Ayah Wan,
Just two days and had to rush back on another urgent call - durian falling every where.

But of course, I should be delighted to have whatever there is here 'shared'.

What have you been doing to leave your blog unattended? It has been over NINE months - long enough for another brother/sister!

With kind regards and salaam to all in the family.

Alfatihah to all those durians which had dropped. Our turn will come soon enough ...

When I obtained my O level in 1957 I promised my father if ever I earn a 4 figure salary I would send him to Mekah. He had to wait till 1972 and I could see his joy and happiness since that salary could only be earned by highly educated
people and he was among the first to go there by plane. Unfortunately he fell ill after completing his hajj and passed away about a week after returning.

Four generations later we are still enjoying rambutans from the trees he planted around the house saying they were for his anak cucus and the birds. Being on tanah gambot, one of them reclined and had to be trimmed but a young tree is growing from its base thus continuing his legacy for many many more years !!! People of older generations do have such foresight !!!

I hope you can forgive my begging for assistance here. I know it is not very suitable...but I am calling out to anyone who remembers or have access to the old legend Syair Dandan Setia. Not the movie. I am drawing a blank wall.

I have bits and pieces. Major questions are ...

WHo was his father - Raja Merembat? Mother? Permaisuri Lela Mengerna?

Was he from Negeri Dendam Berahi?

Who gave birth to Intan Terpilih after eating the pomergranate that fell from the heavens?

Who was Dandan Setia's first wife?

How did Intan Terpilih become fair again - she was reborn pitch black skinned?

When and how did Dandan Setia win Intan terpilih back?

It pleases me to see that you are able to notice the similarity between my durian and your rambutan tree - the selflessness of our elders. You have reminded me of a ambutan tree which my late fsther had it planted before I was born and is still bearing fruit.

We will see if someone can through some light for you through our VISITORS' CORNER. Just sit tight.

Allahyarham was "orang tua" to us who had then just arrived in Sydney. The fact that we were both from Kuala Terengganu got us talking and comparing notes. He happened to know my brothers, Wan Mansor & Wan Ali, and shared many a story which showed a new dimension of my brothers ;))

I am pleased know you, at least your family. Are you stll in Sydney? Of course I now your two brothers well. Wan Ali was in our group of 55. What a small world !
Do leave comments to remind me that you are round. If there is a bit more personal you wish to know (esp of W Ali!) just drop me a line. Any way, how did you come to visit Almanar?

What a small world....but then, with 16 brothers & sisters in our family, the likelihood of knowing any one of us is quite big. I am no 13, by the way. Was in Sydney some 30 years ago, and lost touch with Allahyarham after we came back.

Only SIXTEEN? And how many of your own do you have?

Where are you now, in KL or back in KT? Come and call on us if you are around.

I really liked the durian fruit. it's also very unique and diverse kinds. but I do not understand, why many people who do not like durian