Tini was what we all called her at Almanar thirteen years ago.
And Tini has not changed in name and personality.
Her parents sell satar.
Her parents’s parents sold satar.
Perhaps even before that her folks prepared and sold satar ,too.
No wonder theirs is probably the best known satar in this locality.
--------------
Satar is an age old favourite delicacy in Terengganu. Like keropk lekor, budu and so on Its main gradient is fish which is ground and mixed with fresh coconut and what not, and dexterously wrapped in banana leaf in the shape of small cones, then skewered on sharpened bamboo sticks and put on the barbecue, emanating an inviting aroma only typical of satar.
---------------
Tini, being a member of an old satar family, does her share in this small traditional family business, if you can call selling at a road-side stall a business. Her father, who works as a general worker, does not really need to sell satar to feed his family. But he does need the extra ringgits from satar to keep his six children through school uninterrupted. He is determined to see that they all have a better lot in life. So in the afternoon Tini’s father and family are busy at his small stall by the main road in front of his house.

And today Tini continues to do her share, giving a helping at the road-side stall, but only whenever she is home on leave from her work in KL. She has a full time job like her two sisters.

Tini attended tuition classes at Almanar for the whole three years, immediately after copleting her her UPSR exam until she sat for her PMR exam. Unlike her a younger brother, like many boys in this area, attended Almanar just for ONE day. Nevertheless he is pursuing a diploma course which hopefully will also enable him to get a job. That leaves number five and six in the family, a pair of non-identical twins of a boy and a girl, who have just completed their UPSR and are now among those starting to receive tuition at Almanar, like Tini thirteen years ago.

It was in 1997 when Tini and a dozen other children joined Almanar, which was then in its infancy years. Of Tini there was nothing outstanding to talk about except for her determination to fulfill her parents’ dream. she was a late developer who needed that extra chance and help to prove her worth. After her secondary school she went to do a diploma course in civil engineering at UTM at the end of which she continued to do her degree. Pakcik was pleasantly surprised when one day Tini came to tell Pakcik that she had earned herself a FIRST-CLASS honours degree in civil engineering.

Tini now works for a consulting firm. But she can still be seen helping her family whenever she is home on leave. Her father still has an unfinished job, to see his last two children through. Hopefully Almanar will be of help to the twins as well.

Tini was engaged last December. Two months later she turned up at Pakcik’s house to personally deliver an invitation card for her wedding last March. 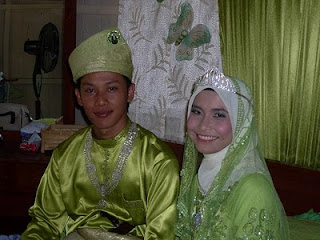 Today Tini is someone’s wife, a lucky man indeed he is. It is Makcik’s and Pakcik’s prayers that Tini will have her own family one day.

But Pak Cik will not cease to wonder whether the satar saga ends when the twin have succeeded like Tini – when their parents’ dream and prayers have been answered. Will Tini’s children ever know how to prepare satar? Will they ever know what satar meant for their mother’s family?

A lovely real-life story that exemplifies many things, Pakcik. First. don't ever underrate a pisang goreng, keruouk or satar seller by the roadside. He or she could be poor but the sons or daughters could one day be an engineer, doctor or even a PM. Don't also underrate a child who is a slow-starter. Given the right start and opportunity he or she could be a 1st Class degree holder. Al-Manar offers help in giving that head start. Finally, the innocent-looking young lady or man selling kerupuk or satar at a street stall could be doing it out of love for a job that had helped her or him to grow up and become somebody. In the US I've met lift-boys and cab-drivers who who were doing their Masters' degree or Ph.Ds. Yes, they came from poor families but someone had, for just a short while, given them a head-start or an eye-opener which made them see the possibilities of pursuing their potentials to the full. I've no doubt that al-Manar has been and still is playing that role. May Allah bless you for your amal makruf. Amin.

norzah,
You have seen enough to be convinced as I am in what you say that we should not 'underate a child who is a slow starter'. What we need in our community is more voluntary workers who care for those unfortunate children of poor families.

Yes..I totally agree with the comment. We maybe poor in the eyes of people, but that situation can motivate us to be like successful people out there, having a god life and a good job. A slow starter, given a good start and financial support as from Almanar, can make it. I hope more of sons or daughters in Batu Rakit could be more than just engineers or doctors. Who knows? Pakcik said future is not ours to see.

To Tini here is an old friend to say congratulations and good luck.

Pak Cik,
The people come and go but the industry stays. Satar will be there as long as people want it. I saw Satar offered for sale in TTDI (in front of the Jesima Book Store) once before but it didn't sustain. Maybe TTDI is not ready for it or the way it was promoted was flawed.
The way I had it in Kemaman before was somewhat 'wholesale' The shop had only nasi lemak and satar.
The moment you sit, the satar is brought in, steaming hot.You just take one of the nasi lemak into your plate but you will have satar galore to your heart's content.Is it the normal/typical way to have satar. The shop owner was doing roaring business then.
Tini being a brilliant person may think about some creative ways on how to prepare satar, faster better and tastier.
Our youngsters who are now better informed have a way to bring it to a higher level. Satar will stay, I'm sure! Salam

Hazri,
Tini has made it to the 'pelamin'. So has Yani, Noraini etc, all your mates at Almanar. When will it be Makcik's and Pakcik's turn to attend yours? Good luck.

Kaykuala,
You have a point there, about some creative ways on how to prepare satar. Tini ought to take this up if she has not already thought so herself.

Hopefully my turn will be at the end of this year..InsyAllah.I'll make sure both of you get to be among the first informed.

Hazri,
That is a good news. Macam mana kalau bersanding dalam perahu nelayan dipantai Batu Rakit? Selesai sahaja terus berdayung kePulau Yu dan berbulan madu sambil menangkap ikan - you and her on a deseted rocky island, the sky and the sea, under the sun during the day and the moon at night, a new couple twiddling their thumbs while waiting for the fish to bite.
Just a thought from Pakcik, Hazri.

I have been out of the loop for quite a while. Must admit I have been "wintering" for no real reasons.
There are moments like these, and getting out of the rut takes some effort.

ARZ
After a hard winter we can expect sunshine, pretty buds, blooms, fruit and all.So we will soon see records of some real activities.

"Twenty years from now you will be more disappointed by the things that you didn't do than by the ones you did do. So throw off the bowlines. Sail away from the safe harbor. Catch the trade winds in your sails. Explore. Dream. Discover." -- Mark Twain

Hazri,
Now I realise and appreciate what it means to me to-day what I decided to do nearly twenty years ago. It truly brings home the wisdom in Mark Twian's words.