Hatinya baik (He had a wonderful heart) –Part 1- Al Fatihah 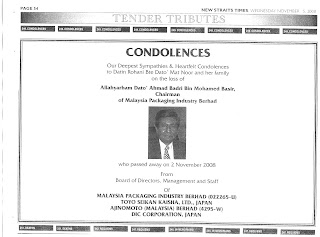 Pak Cik was informed by a mutual friend on the Friday evening that Dato’ Ahmad Badri was in a rather critical condition. With Mak Cik I drove down to KL in the morning of the following day, Saturday, after hurriedly canceling a number of scheduled classes. In the afternoon of the same day we visited our friend who was breathing hard from an oxygen mask. At the end of that visit, the last occasion we saw him alive, and on excusing ourselves, Pak Cik could hardly hold my tears saying to his dear wife, “Walaupun Badri sakit, hati-nya baik.” (“ He may be ill but he possesses a wonderful heart.”) I was implying to that piece of organ quoted in Prophet’s famous hadith. That is what truly matters in all of us, the heart. As it were, it was just about twenty four hours before we received the sad news of his departure.

Throughout the morning of the following day,Monday 3rd , his house received literally hundreds of visitors, or could it be more than a thousand? It was a measure of the man’s stature in life, a public figure, humble and approachable, the same that we had known for about forty years.

Some years ago, at the end of one of my visits to Dato’ Badri’s house, he popped out the following statement, “ Hassan, I would like to contribute something, a small sum on a monthly basis towards what you are doing. You just tell me how much.” Pak Cik cannot ever forget that occasion – that offer that came out of the blue. Never had Pak Cik given a hint a need for donation to him, for that matter to anyone. He was interested in Almanar and often commented favourably and now he felt the need to contribute instead of verbal supports. Somehow, Pak Cik did not take on his offer of monthly contributions. However, it was coincidental that I had just planned to purchase 150 copies of a five-volume book on English grammar It involved quite a sum that Pak Cik was about to commit. Involuntarily, Pak Cik put that as an alternative. Without batting an eyelid Dato’ Badri agreed. Strange enough, he was even grateful for the opportunity to contribute something. It was a cause he believed in. That speaks volume of a man I had the pleasure of knowing. 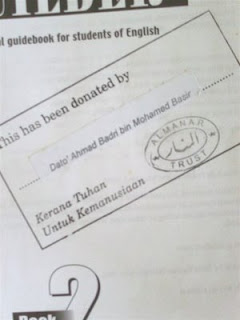 Over the years every one going through the English course at Almanar has had to read the books and analyse their contents. Since my return from Kuala Lumpur I have made it known to pupils at Almanar that from now on we have to recite a short verse from Quran each time we open the books that carry Dato’ Badri’s name on the inside cover. This will be our normal practice in memory of that wonderful friend, our small contribution in return.

To those ex Almanar pupils Pak Cik would seek you all to recite Al Fatihah for the very person who has a share in what you have learnt at Almanar. May Allah bless his soul. He will always be sadly remembered, a man yang hatinya baik.

AlFatihah to the family of Dato' Ahmad Badri. I've sent you an email.

This is the very first time i am writing to this site. 'Hatinya baik', indeed, Dato' Badri has. I will never have the chance to meet him, but the presence of 150 copies of Adibah Amin's books on the shelves in our class proves his kindness. They are regarded as an Al-Manar's text book for all of us for years and for many years to come. It is said that, among three things that will help a person in his after-life is beneficial knowledge. Hopefully the English that we have been learning will not only benefit us but Dato' Badri as well. Al-Fatihah.

GUiKP
Thank you.
I enjoy the wonderful details you are able to produce in your blog.

Aliff
Iy is nice to see that you are able to break away from your study to visit and comment.Pak Cik have every confidence that you will one day be a mechanical engineer, the dream you often mentioned.