This true story happened a week ago when I was 500 km away from my home in Terengganu, having driven that day all alone and non-stop. I was to be with my other half who was in her kampong helping to nurse her aged mother of nearly ninety. Not feeling that tired I sat watching Ajazeera. The time was midnight. They were showing bombing ecenes in Algeria. It was then the sound of a heavy thud coming from outside myhouse interrupted me – a bomb! Almost at the same time Makcik’s voice rang clear, “ Ada jatuh, babah!” – meant for me of course, happened to be the only able-bodied male in the house at that moment. I picked up the torch-light, put on a pair of Wellington boots and out I went out of the house into the darkness. A short search and there it was a big durian half stuck in the soft ground. The wind was blowing slightly, slowly shaking the branches of huge, tall durian trees around the house, each old tree about the height of four-storey building. Within a period of about two hours I picked up EIGHT huge fruit. It did occur to me what if one of these ‘bombs’ chose to land on one’s head? But I have not yet heard of one such incident. 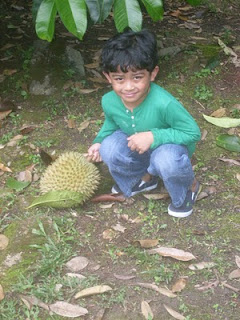 Grand-son, Rayyan has found one - too heavy to lift 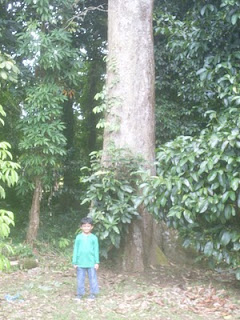 Rayyan dwarfed against the giant tree 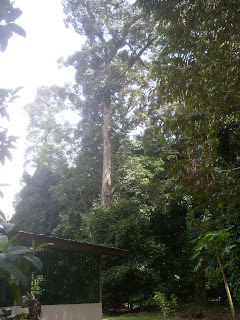 Look at the height of one older than Rayyan's granpa. 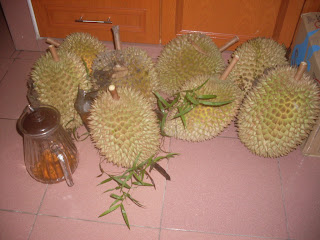 The eight I gathered that midnight

So that mid-night I struggled to open freshly fallen durians for the the mid-night feast. 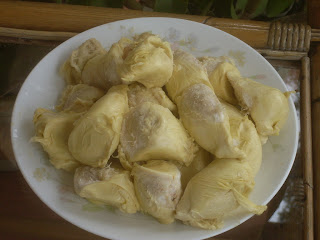 Just from one fruit. Can you finish this or open another?

I am going to Medan right now to get some durian.

Just finished some very expensive durian from our own Medan fruit stalls together with Bik. It was over ripe.

Remember the days when we had durian baru gugur in Chenor, my kampung.

Those were the days...

Like Ayah Wan I wonder at the mystery of going all the way to Medan for durian – your very own fruit stalls? Bringing some back is surely out of question. Ayah Wan is drooling over your durian.
I wonder if those down in Sydney can detect the smell.

Memang tua pokok pokok disitu - about six miles from the old SITC. When I first went there almost half a century ago to marry the owner's daughter, the trees were almost as tall, at least in my memory. A bigger tree was struck by lightening last year. That was the best of all. Hope you have a good feast in Bukit Gantang? I have fond memory of that area. Enjoy your durian feast there.

Got a feeling that the Medan in question here is Kampung Medan in Petaling Jaya Selatan not the one in Indonesia..
It seems that Ninot is still in 1st April Mood..

I used to camp in our durian kebun during my childhood but if they failed to drop I would climb up as I loved the semi ripe ones.

A huge tree was near our house with branches over the zinc roof and that was the best of all the durian varieties in our kebun. When one dropped the sound would drive some chinese neighbours to come over to buy as they knew its quality. Luckily none went through the zinc except the kemek2 roof as evidence where the durians had fallen!!!

Salam to you both and hope your MIL is OK now.

With your kind of networking you can get your HAM members to report the whereabouts of durian falling.

Going by your comments you showed all the signs during your childhood days that you would grow up to become anything but a lady you are - going to sea, climbing durian trees etc etc. Hope all is well down south and you have time to visit your old kampong. Who knows you may be welcome with fresh durians or invited to climb one for the semi-ripe one.

How I love durian. I finished by myself all that Makcik gave the other day.Thanks to Makcik.

Pakcik I can finish 2 biji durians in one sitting! Its my favourite! Im going to look for durian now...dah meleleh air liur ni!

I love durian,its my favourite fruit.I wish i have my own kebun durian..

Too much durian is not good for a young lady's skin, kata tok bomoh. Do you want it to be like that of durian.

I used to visit relatives in K Kangsar. I remeber driving north, road going uphill, and down to the Taiping junction. There were lots and lots of durian along that road during season.

Do not just wish what you can do it youself. Next time you eat good one get two seeds. Have one planted in front of your house and the second in the rear garden. If you are now twenty, youwill be eating durian from your own trees by forty. If you are forty then by sixty you will climb your own tree like the young amimy01! Sixty is nothing as I am twice that and am still going strong! Will you do that and stop wishing and praying. Do it first then pray.

Wow you take durian, and that of Ayah Wan's concoction as well? Don't say I haven't warned you ... meowing all night long and up the tree.

No one has yet said, " I don't quite enjoy durian." So you are one of them.

Salam Pak Chik,
Your post reminds me of my childhood days..
Whenever we heard the "bomb" sound, which normally hit the zinc roof of our house,me and my siblings would scurrying out of the house from all corners to get the durian.Whoever got the fruit would get the chance to sell it and keep the money in tabung ayam..
The only time when we turned into "orang kaya"...

Yes Pakcik I was a regular tomboy and life was just wunderbar, climbing fruit trees was part of that wonderful bygone childhood days. Alas that particular durian tree is now history having died of old age. Its descendents' fruits are far cry from its quality except one which had to be sacrificed as it grew too tall with branches over the asbestos roof of the new house, indeed some did create holes when they fell!!!. Ever since its demise I am very choosy about durian and always compare them to my favourite tree.

Alhamdulillah all is AOK down under, recently got back from umrah but was not impressed with the biggest and tallest clocktower in the world plus the super high buildings which seem to dwarf Masjidil Haram. There was a fire there recently and electricity was interreupted for some hours. Apa nak jadi when the transformation completed making the Holy place feel more and more conjested !!!

Cikgu,as I said to Zabs above, I did not grow up with durian trees around the house. We had many rambutan and orange trees. You seem to have that.That tabung ayam and jadi 'orang kaya' are amusing memories. I suppose in Kelatan you had lots and lots of durian as gift from your local pupils. But I doubt that is strong enough reason to attract you back East.

As i remember it, Akhi, durian time was one of the best times in the kampung. There was plenty to eat and selling a few provides enough pocket money for the day. I can recall many wonderful hours of chatting, playing cards and reading in the day and night while waiting for the "bomb" to explode. After having a lot of durians, there were other minor bomb explosions we have to tolerate. And sometimes they really stinx. That's part of kampung life at its best. Salam.

So you too remember the days when picking durian was fun, to eat and to make that extra ringgit. And playing card is one one derived by many those days. I remember sitting to watch the leders playing cards. Now it is all computers; but durian remains durian!

I blame you for making me crave durians.

You, a man, craving?
Good luck

Well I guessed after eaten the durian Its a real 'humid night dreams come true' for you.

on Masjidil Haram, I guess they just want to ensure the jemaahs that has increased over the years can perform ibadahs in comfort. Alhamdulillah I had the chance to go there with my parents n sisters back in 1996 and visited the "old" Mekah/Madinah. The Holy cities surely had changed from then to my last umrah in 2009.

Wishing that I could there again soon.

ahhhh~ pak cik...
I am envious because I really wish to eat at least ONE durian... hahaha^^ they look appetizing. :)

By the way, I still can not drop by at your house. We are having non-stop activities and hectic life is injected in our life as TESL student here. I wish to go for your class this coming holiday. hah~ Can't wait for it! I really miss your teaching.. it looks like I become form 2 student again... ^^
Take Care pak cik...