A Map of Trengganu 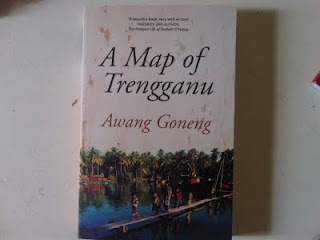 A Map of Trengganu – watch the spelling
This is a new book by Wan Hulaimi a.k.a. Awang Goneng, a book which should be owned and read by many who enjoy his weekly column in NST every Sunday, and his blog, Kecek-kecek
I admire a person for his ability which is beyond my reach. For instance, I would look with awe at a person who is head and shoulder towering above me. Wan Hulaimi has a way with words. In Terengganuspeak I say ‘ macang maing buwoh guling’ (like playing with marbles). And I would also say he is a ‘loyar burok’ (a lawyer good in spinning). You see, by his own admission, he picked up his Law degree scroll from the office of the Registrar of the famed London School of Economics ( mind you, just a ‘school’, not quite the taraf antara bangsa ‘universiti’ we have many in Malaysia). That happened one night when the door of the Registrar’s office was left open!
I have a close friend who reads Wan Hulaimi’s weekly column. At times this friend moaned over his difficulty trying to make sense what Wan Hulaimi wrote when the latter casually dropped a name or an event. In response I would question my friend with an air of superiority – just for him- what did he think he was when I myself – ha ha - would need nothing less than the whole set of Britannica to check the famous name or event referred to by this columnist.
Awang Goneng dropped by our house one day when he was in Terengganu launching his Growing Up In Trengganu. Before he left he kindly offered to give my Almanar pupils a session on creative writing. My goodness, I nearly told him I needed that for myself more than for those children.
That is a glimpse of the writer I know. He is skilled in an area which I am lacking, hence my awe and admiration. To have a preview of the book before you go rushing to spend your last ringgit and curse Pakcik at the end of it, have a look at the following few pages of that book.
http://www.monsoonbooks.com.sg/downloads/ch1-0854317.pdf
Berkhidmat kerana Tuhan untuk kemanusiaan
Posted by Al-Manar at 4/13/2011 10:51:00 pm

I will grab the book when I see it.

I have to admit. That like most Melayu men, I was not a bookworm. When I suffered acute depression during my second stage of my academic years (my gf dumped me, and at the same time my academic life turned topsy-turvy, special thanks to the ultimate power of Sarawakian black magic), I did not know what to do in order to overcome it. One day I stroll about the bookshelves of Kuching's branch MPH bookstore, I came across Awang Goneng's GUiT.

"Hey, this is Growing Up in Terengganu! I remember reading Kecek-Kecek!" I said to myself, in Trengganuspeak of course.

Without hesitation, I fished some money from my wallet and handed it to the cashier. That was how I get my first copy of ENGLISH book.

Awang Goneng is very good in stringing his words into beautifully crafted stories about his birth place. He is a wordsmith, a Trengganu Hemingway.

Thank you for the closure. Is the book available now in Malaysia I have a copy of the earlier one. True he has a way of expressing. I admire writers for their endurance and steadfastness to come out with their publication. How many of us can leave recognition to family as writers do. I am about to get into print my own biography, an attempt at recording my life of 70 odd years.No matter what it will be a treasure to the family. nanti Abang Ngah dan Kak Ngah from al Manar can get one copy. Ya yr name and wife was referred in his writing. Surprise? Salam

Ayah Wan,
We all have something from Him. It is a matter of identifying it, being grateful for it and putting it into good use.

Yongzu,
You can trust Him absolutely - others we may have to be wee bit cutious. Than you for the confidence.

Since you are an English teacher, you would be in a position to evaluate it. I am sure you will enjoy the book.

Don't be so parochial, Sir. Awang Goneng, being in London for ages now, may not want to identify himself as one Trengganuist. He just claims to be one to sell his books.

I am glad his book has had such a good inpact. Your English will even be much better, not that it is not good enough today - and write a book on how a Trengganu kid can survive in Sarawak jungle.

What's all this appearance in your book. Hve you not heard of the litigation cases involving hundreds of million ringgit for libel? Kak Mah and Abang Ngah are looking for opprtunities to get rich - fisherman's life being rather hard now since the tsunami!

It is wonderful to be remembered. Thank you.

dear pakchik, it's been a while since i last left a comment here. but you can be sure i look forward to and read each and every one of your posts. i enjoy reading your replies to peoples' comments just as much. and today, i can't help but laugh at your reply to kotastar. it feels good to see you so happy.

thank you for introducing me to Awang Goneng. I love the way he writes from the sample pages you linked. will get hole of the book pakcik!

I really look forward to reading AG's "A Map of Trengganu"!

Members of my family have got own copies, no forgetting one for their father.

I think our young teachers in English should be encouraged to read selected books like this and appreciate how Malaysian scenes can be effectively written in English.

Yes Ayoh Wang. You said it!

I have a small section which I call my modest Malaysiana shelf at home and look forward to adding AMOT to it.

Awang Goneng will be signing copies of his book at MPH Midvalley on Saturday afternoon 30th April.

Malaysiana shelf? This is certainly new to me. I suppose this is meant for homes of poets and writers, in which case I will continue with my On-the-floor spread!

On-the-floor spread?!.. to my not so healthy mind ;) it has some naughty slant to it, oh dear! am I interrupting some poetic exchange or something?..

You have a fertile mind, my friend. That much I can say. I am a simple man - understanding black as black, white as white.

p3chandan,
Harga buku kita tidaklah begitu mahal. I think some of our writers are truly good. Do get one from MPH.

I did have the chance to read AG's latest entry and knew that he would be coming 'home'for the sale of his new book. Not too sure whether Kak Teh would be accompanying him. I would love to meet AG personally, but on that day, insya-Allah, I would still be in Saudi for my umrah. I wish him the best of luck. Salam bahagia, Al-Manar.

I just noticed that the very modest Sir Pok Deng claimed he was not a bookworm, almost a reluctant reader, yet mentioned Hemmingway at the end of his comment.

I always say you can tell a reader by the way he writes...am I right, Pakcik?

Awang Goneng can tell you are from Terengganu however much you try to hide your 'ong' and 'ang'!

alam Tuan,
Met AG in person a few years back in KL, and got the GUiT book signed by him.

If that is the case, more so you need to get a copy of AMoP.