Four days ago while the PBS issue was very much on my mind, I sat down to see what bloggers had to comment on that issue. Just then I found my streamyx line dead. It was the work of our ‘world-class’ copper cable thieves who have caused so much heart-ache and frustration to me in particular. The regular phone interruptions in this area are the work of these culprits
So, the next three days saw me driving some eight kilometers to where I could get a ‘free’ line. The current situation took TNB longer than usual to be put right as the thieves had removed the underground cables in three separate localities in my vicinity.

At the end of my fourth visit out for free wi-fi I stopped to buy Sinar Harian.  ( I have practically stopped wasting my precious ringgits on other better known papers which  seem bent on straightening my crooked way of thinking!.) Sinar seems to provide some colouful local news.

When I reached home I was pleasantly surprised to find my phone and streamyx back to normal. What a sigh of relief!

Now, I thought I could start a new posting after scanning what Sinar had for the day. I could hardly believe my eyes to see seven pages on the subject of mosques in Terenganu. I like this paper for that kind of reporting. 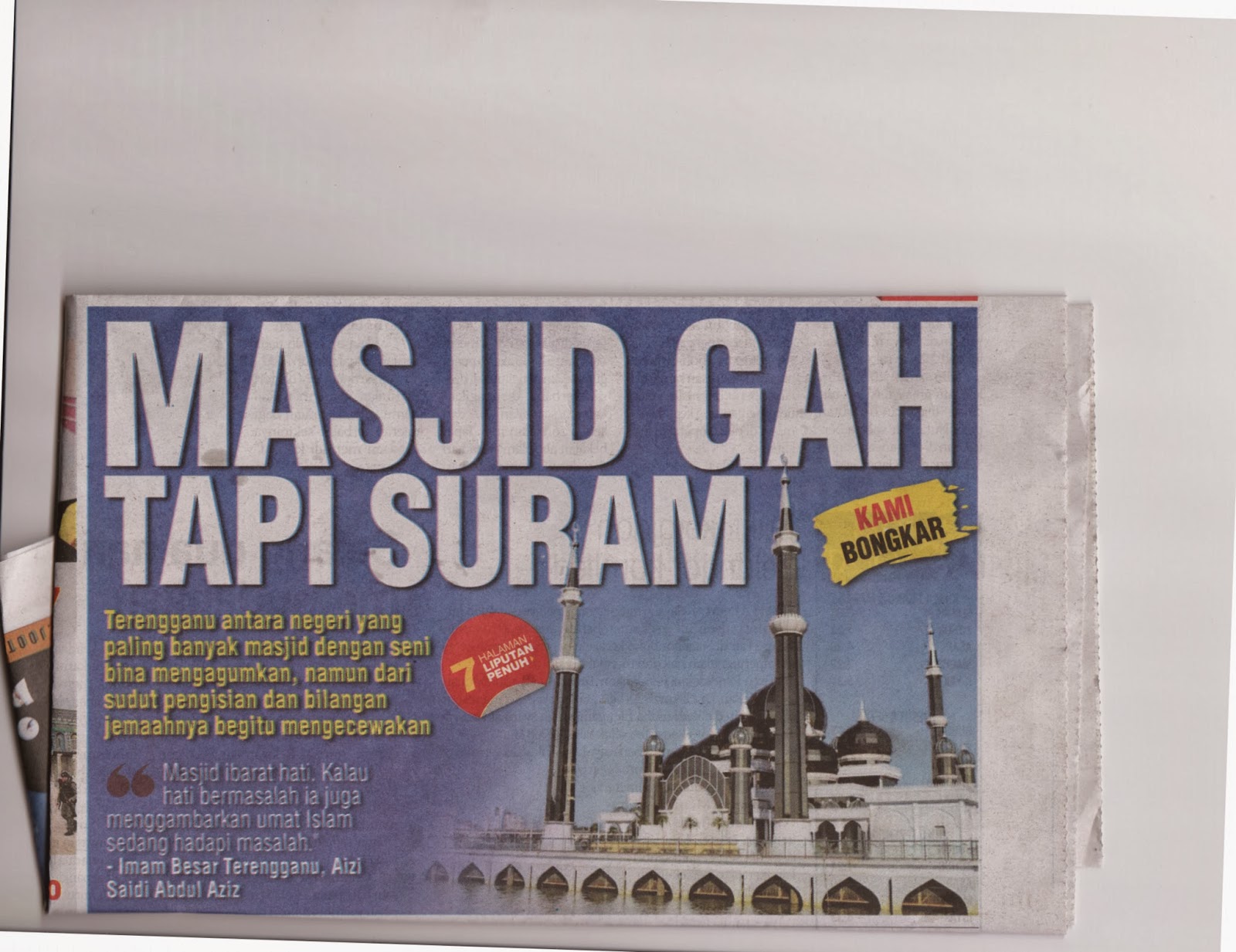 Terengganu can boast of a state having the greatest number of mosques in the country. A figure of 495 mosques under two main categories was mentioned, but I could not find the number of smaller places of worships that we call ‘surau’ – as a conservative guess, the figure would not be less than  three times that number of mosques,.

I was particularly pleased to see the following statement : ….. kerajaan negeri bagaimanapun enggan dilihat sebagai juara masjid terbanyak tetapi kosong dengan jumaah …..( ….. the state government, however, does not intend to be recognised as the champion in the number of mosques but empty of worshipers …..)

There was also mention of expensive mosques built more for show than out of need. Bravo!

Within the radius of three kilometers from my house I have three mosques (where gatherings for Friday prayers are permitted) and not less than twelve suraus; a few are, sadly, politically ‘coloured’. I must also point out that, my home being on a straight coastline, the radius can draw only half of a circle, the eastern half being tye South China Sea, except for the few islands.
__________________

Wow, Pak Hassan. That many?

Pokcik Hassan thanks for sharing this thoughts especially of the Mosque. Well these folks build mosque as a mean to an end. The more costly the building they build the better the end be.

It would be better had the money been used to build more English school so that the young could learn the language and get more access to knowledge. But what can we say...

Have a nice day anyway.

Yes, it is that many. There is no harm in having facilty but it has to be with some thought on what the community can gain beside a place to pray. Imagine the fight for guests for 'buka puasa' or 'khatam Quran'towards the end of Ramadhan.

You put it very plainly in 'The more costly the building they build the better the end be.' I dare not say that because I can only draw sighs at what what bothers me and members of my community.

You provide deep insight into what appears simple matters. Thank you.

AK, Salam. You know I normally do not like to comment on anything related to religion for fear that it may be taken as unislamic, but from the few responses I notice that it is acceptable to criticise within reason. To me money spent on building mosques within a short radius is better spent to help the poor to build better life.

Dear Pakcik,
Masjid first and jemaah second. Jemaah will follow the development and the physical presence of masjids. Once there is a masjid interests can be whipped up to have them filled up. The more masjids the better. It is only when there are no masjids that we worry!

We are entitled to have our opinion. The poor and the needy are often neglected. It is hoped that we do enough for them. Otherwise the extra mosques mean very little to our people as a whole.

Keep doing your best, Zul.You and family are doing your share of good things.

Indeed it is a reason to worry when there are too few mosques. But here we are facing the 'too many' situation, a reason to devide people into too many small groups.

Dear Sir,
I was once involved in the construction of mosques in a particular state. Oftentimes the more affluent communities would add to the allocation, as they preferred a bigger building with better facilities(not necessarily wrt aesthetics). In my neighborhood the new, big, functional, beautifully landscaped mosque becomes the community center for the young and old, the massive parking area full of cars nearly every day. A mosque should be the focal point of Muslims, the integration catalyst. How wonderful if mosques could be well equipped with classrooms (with online facilities), lecture/seminar halls, shops, crèches, playgrounds, galleries perhaps even amenities for musafirs etc. I am still amazed by the concept of Prophet Muhammad's (PBUH) mosque in Madinah, which even had living quarters, courtrooms etc. even though the building materials were only locally available palm fronds, trunks and others. That was one truly sustainable building!

It is truly very heartening to notice comments like yours, elaborating on personal experience. A well equipped mosque playing the role of one-stop centre is what I often dream of. We need this more now than ever in the face of escalating moral problems among our young. As a centre for sporting, social and educational activities, a mosque can do what many fail to imagine. Today a mosque is a strict centre for limited activities, not what you and I have in mind.

In addition to the number of mosques and suraus in my area, so I expect in yours, there are the so-called mini ‘dewan masyarakat’ which I do not see being much utilised. I would like to think that Muslim YB’s should see our views on the use of mosques as an agenda. I have been here for 20 years and am proud (?)to say that, a week ago, my home finally saw, for the first time, the visit of a YB, a new YB for this constituency.

Salaam to you and wish to see to more calls on us.