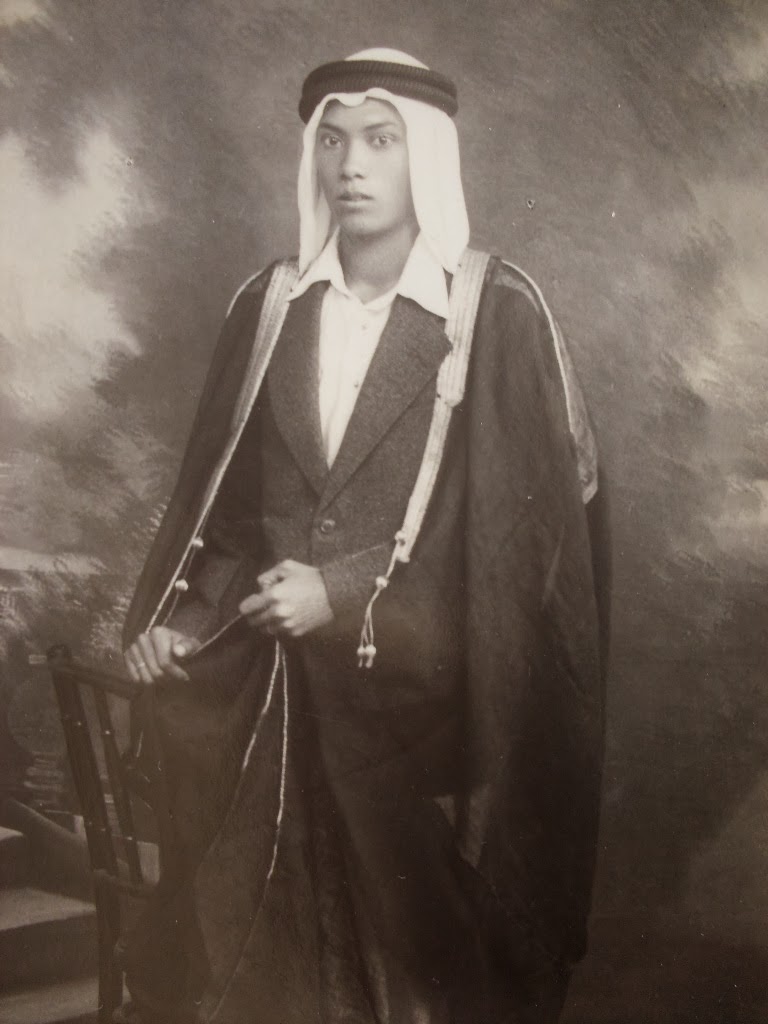 That is my late elder brother, (Allah yarham) Idris who passed away last year at the age of eighty two (82). This picture of him, dressed like an Arab prince, was taken soon after his return from his Islamic studies in the Middle East, hence his attire.

I was then about to finish my secondary religious school, and, if all went as planned, I would be shipped (literally so, before the era of air travel) on the same course to the Middle East. Of this plan my brother had a suggestion which sounded logical. In his opinion younger sibling should first be allowed to learn some English. He saw that as an advantage; he himself planning to join a private school for some knowledge in English language before applying for a job. His words carried weight. After all I was relatively young, having performed two years ahead in completing the religious school. Yes, I was ready for that.

Today, I realise what happened then, was a landmark in my life. I was being led to a junction where Robert Frost’s famous poem said:

“Two roads diverged in a yellow wood,
And sorry I could not travel both
And be one traveler, long I stood
And looked down on one as far as I could
To where it bent in the undergrowth
……………..
………………”

It was not easy by any means for this boy to join the only Government English school in the state. I lacked sufficient knowledge in English (other than whatever I had managed to pick up from afternoon classes) and mathematics. But my family was adamant that I must join the government school, by hook or by crook. It was indeed by ‘hook or by crook’ ( of which I hope to write one day ) I found myself starting my proper education in English. I had to begin at Standard Seven, the equivalence of today’s Form Three.

Three years followed and I performed well in the Senior Cambridge School Certificate examination (SC), the equivalence (or not quite!) of today’s SPM. The choice of a new path began to emerge in the thick undergrowth, and I took it.

“ I shall be telling this with a sigh
Somewhere ages and ages hence:
Two roads diverged in a wood, and I –
I took the one less travelled by,
And that has made all the difference.”

The SC results were good beyond expectation, giving me an alternative route, equally attractive. And I took the road.

Indeed, ‘ages and ages’ thence, 62 years later, I reminisce and tell myself ‘with a sigh …. Two roads diverged in a wood, and I took the one less travelled. And that has made all the difference."

What, otherwise, I would I be today had I taken the other road?

My contemporaries of that time became ‘mufties, kadhis’ and educators in Arabic and Islamic subjects. One of them has the satisfaction of having, among his tutelage, a champion in the Malaysian International Quran competition. One of them, Allah Yarham Abdul Malik, a graduate from Al-Azhar, passed away two years ago while serving as a respected Imam of a mosque in Sydney where he decided to settle down with his successful family. 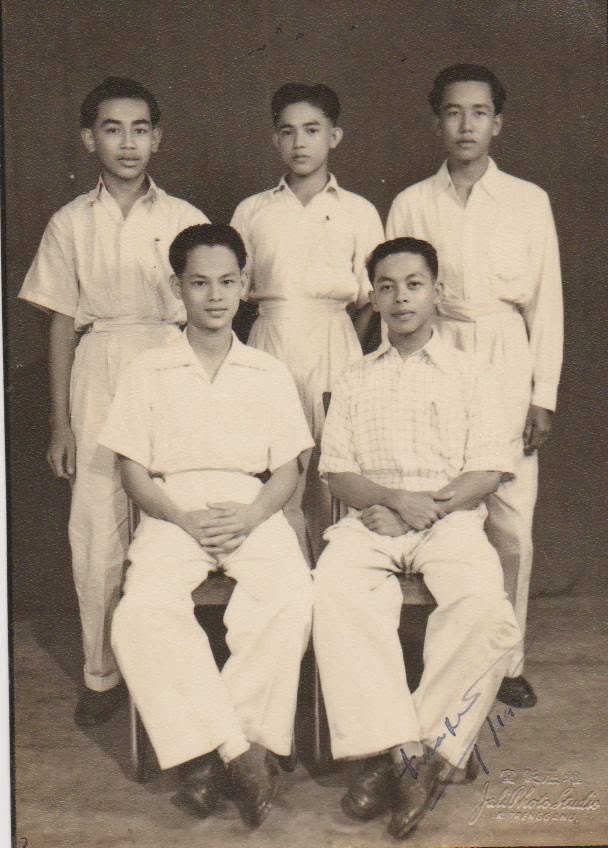 I could be, today, enjoying my old age as one of them had I taken the other road in the wood. But this had not to be. That elder brother of mine, (Yarhamuhullah) was the agent of change chosen to steer my path to my presence, as happy as it could be. Indeed we are all entitled to have a dream of a perfect plan, but He is the Ultimate Planner.

Dear Pakcik,
The road less taken made the whole lot of difference. One can indulge on 'what ifs' to no end. Mindful however of the unselfish being of your late brother who wanted younger brother to succeed. And succeed he did, with flying colours! One can now reflect with utmost satisfaction.

Assalam....
I grew up with no "professional" guidance. My elder sisters only made sure that I studied hard for they knew I was very playful and love sports rather than books.
I have never taken roads less traveled.Most of the time I went 'blind' and did what I needed to do all on my own. This is where I am today. May Allah almighty have Mercy on me.

Hank,
When I started about this, as you said, the what if's are everywhere innour life. I do not mean if we had breakfast this morning, or such trivials. What if you had not bothered to hear someone say you were good at poetry? You would not have reached the level of competency where you are, and no poetry book was ever launched, and what can happen henceforth.

What if MAS had cancelled the il-fated flight last week?

I know, as a poet you are good at this topic. And one piece, on what if, will surely appear in your blog one of this days!

Of course we all have choices in life. You could have spent more time in reading and less in sporting activities. But you preferred to spend more time on sports. Your route in life might have been different, but not necessarily better. That is what I mean by one road taken, not the other.

The road you chose has brought you the life you are enjoying, plus such opportinity and love to be involved in SmraTop etc. We all have to be grateful to HIM for the perfect plan we have gone through.

This walking down the memory lane is valuable to be shared with us. Thank you. May I reach a stage in my after years which I could reminisce without regret of the path that I chose just like you. Amiin.

Assalam, Pakcik. The road less taken definitely made an awesome difference, alhamdulillah. Wish you a blessed day each and every day.

Noting is good or bad,
our thinking makes it so....

Aziela
Waalaikum Salaam
No, Aziela. There is no reason we regret for whatever route we take in life as long as our choice is between two good alternatives. Of course vif we choose to act on what we know is not good we have ourselves to blame. Act with good intentions and, insya Allah, HE will guide us along.

Haslinda,
Waalaikum Salaam
If we put aside what we must not do, the haram parts, we choose what we think best. It will lead us somewhere. Accept whatever comes and try to do better. We can choose our path but we will never know where it will lead us for sure. We just trust HIM, the Ultimate Planner.

Waalaikum Salaam
As long as we put aside what is 'Haram' the trest can indeed be as you say - just a matter of our 'thinking'. Nothing is really bad.

In times as now your story brings a freshness taking us away from the fated Mas 370 which of course will be a subject of lengthy exposure and attention. You showed gratitude as well as compassion to yr late brother for the steps you took.

Whrere we are is not necessarly what we planned and strived for. It is like that flight, its landing site is not any one's dream two weeks ago. Should we not give credits to those who deserve, instead of being proud of our achievements in life?

Thank you, my friend. Am glad you are well and back in ciculation. Do not stop posting and reduce the few number of places I like to stop by for a drink.

Truly said. Indeed we need to look back and take a thorough discovery of those that have contributed to our standing in life now. No matter how small their contributions, we are where we are because of the lifts from them.Our teachers, our doctors,our bosses, our friends and of course our parents and families deserve our gratitude. Thank you for the fresh enlightenment. Now we show our endearment in what ever way possible. Terima kasih Saudara Al Manar.

It is good to spare a moment to sit back and look at life with less emphasis on 'I' and what 'I' have done.

Thank you for the second visit.

Unplanned but I was in KT whole of last week for much needed rest..didn't go out much except last couple of days...cycling at TTI with my nieces. :-)

Praying that mak cik and you are in good health.

Thank you Pak Cik for the offer of the "mouse"..but when I see a real one I'd scream n run...just like the houseowner in Tom & Jerry...hehehe...

You can join FB. Twitters and the rest of it but continue with your blog, Sekali Sekala. At the end of the day you can compile an intelligent volume of your own life, travel and whatever subjects you decide. To me FB provides instant excitements as at a gathering and that's it.

May Allah reward you for your sincerity.

Like you, I write for a reason; of real life, never intended to be pretentious.
Thank you for your kind thoughts, madame..