Awang  Goneng  (Wan A Hulaimi) came around to leave a possible explanation to the ‘Active Eye’ of my last posting. Obviously he had done some research and suggested further reading – http://www.cvcny.org/index.php?s=1&b=4&p=4

On a number of occasions his appearance was timely. This time I was planning to write about my uncalled-for poor impression of certain teachers around me. I must make it very clear that I am not in any way generalising my view of teachers, the one group I like to befriend. I sigh when, in my occasional depressed moods, I see weaknesses where they ought not to be. 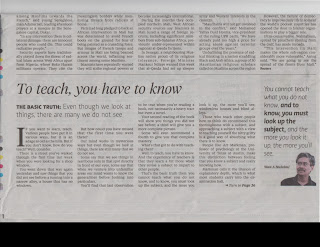 I was in that mood when I read W A Hulaimi’s weekly column in New Sunday Times of 20th January, ‘To teach, you have to know’, as usual a well-researched piece of writing. On this subject he quoted Art Markman, a professor of psychology. I will now copy-and-paste a few lines from that column.

- If you want to learn, teach.
- You cannot teach what you do not know, and to know, you must look up the subject, and the more you look it up, the more you’ll see.
- We often ask of each other, “Are you familiar with the subject?” as opposed to “Do you know?”.
- Before I started teaching, I did not believe that I would be the one learning.
-  If you look at a house from a distance, you are looking at it abstractly, but when you move in close you’ll see it specifically, in greater detail – how it is structured, what kind of windows and pillars and which architectural genre.
_________________________________

When I started Almanar and thought of helping needy children in English, mathematics and science subjects, I did not realise how hard it would be for me to do it after having left school more than fifty years. It was not so difficult with English but with additional mathematics, physics and chemistry it was self study all over again. I was not facing a few questions in an examination but odd questions, some from thick-headed children. I had to dig out whatever old books I still had stowed away in boxes, and had to buy more.

It was then I realised the superiority of old imported books over those being flooded in local bookshops. For a start hardly a local school reference book has index at the back, making it virtually impossible to check at a glance the presence of certain topics.
Then at one point a teacher came around and had a glance at the few reference books at Almanar, and declared that those books, being about five years old, were ‘out of date’! No wonder book publishers keep revising school books not less than once a year to keep the contents up-to-date (or create new market?). The catch phrase is ‘format baru’.

To teach I have to learn.

Stubborn as I am, I have been doing it my way. Newton’s laws of motion  have not changed. The concept of chemical bonds between elements has never changed. Do we need to change the way we teach because of changes in examination format?  So today I still make reference to my old books.

I teach, and I learn.

Now I must relate what I did some ten years ago. I had just taught coordinate geometry to a group of Form 2 children. When the children had grasped it I ventured to explain its application in geography; in the formation of longitudes and the latitudes on earth. It was such a revelation to them to know why the range of longitudes is from 0 degree (at Greenwich) to 180 degree east and 180 degree west, but of latitudes, on the other hand, are from 0 degree at the equator to 90 degree north and 90 degree south.

A few days later we had a good laugh in class when the two children came back to report. The first geography teacher they approached asked them to ask a second geography teacher who happened to be around. The second teacher asked them to refer yet to another teacher. To her surpridse a terse reply, a kind of rebuke, came from the third teacher.

“ Apa nak Tanya lagi? Memang dah macam itu. Ingat saja sudah lah! ( Why do you need to ask? It has been like that. Just take and remember it!)” The teacher was obviously annoyed with such a frivolous question.

If you do not want to learn, don’t teach.

I laughed but I drew a long sigh. I am an old fashioned and inquisitive fool, wasting time teaching what is not needed to get ‘Aces’ in an examinnation. I will never know how to use such ‘Malay’ words as, produk, ilusi, emosi, kompelikasi etc. Dewan Bahasa’s dictionary is probably the only dictionary in the whole world that needs to be purchased every year to enable one to acquire the fast expanding Bahasa 1 Malaysia ‘moden’.

Dear Pakcik,
I'm now reminded of the dilemma we elderly and ordinary folks face. We're not even teachers but we have to learn just as much if not more. And we have to learn for ourselves to make ourselves better informed and not to teach others yet. I know of someone who refused to learn how to use a hand-phone when it was still at the first generation level. Later with text messaging he was lost. Now with touch screen he just dreaded and still refused to have anything to do with h/p usage. In this case it's the reverse. We elderly get left behind. If we want to learn we've to ask our 'cucus' to teach us.

Dear Pakcik,
My Mama has a wonderful Geography teacher that to this day, she still visits the teacher who has since retired and living in Seremban. Obviously not one of those who can't read maps or use a globe!!! Sebab itulah ada peribahasa Melayu - kalau guru kencing berdiri, anak murid kencing berlari. A crude one but very apt to describe present day's dilemma. purrr...meow!

Alhamdulillah, the kids have pakcik to expose these kids to learn in a different way, as oppose to just memorising and spewing it out during exams, then forgetting everything after that.

AK, I have just managed to read your with a sigh Teacher oh Teacher. From my observation and deduction particularly of the three stooges of geography teachers either they are nuts or are not interested or not willing to teach or to learn so the buttomline is, siapa yang rugi anak bangsa kita.Well I can go on but it breaks my heart,as we are from the old school we consider education is of paramount importance to our future generations especially Melayu.Anyway AK Forge forward - do what you are doing for the betterment of those kids that require your service/guidance. May Allah Bless Yoy Always. Impromtu ZUL.

Truly there is no end to learning - more so if you want to teach others effectively.

Ha ha,how does touch screen work? What's happened to cat and mouse? I do not want to learn any more. Give me an old phone with a dial!

In the old days there were a lot of why questions. Why is the sky blue and cats have different colours? Why does a cikgu kencing berdiri and anak murid kencing berdidri? The teacher must be angry and shot at the children who naturally ran helter skelter - terkencing-kencing ketaskutan.

Don't we all question why our children behave in a queer way one day? Don't we wonder why the road is suddenly jammed up one day and don's we try to think of an alternative route ? Teachers should teach children to search for answers to why questions. Why should the car wheels be round? Is the answer simply, " it IS round, just accept it" ?

You and I belong to the old school. We read and picked out words and phrases and used them for fun among us. Remember 'we will go Bunburying .. (from Importance of being earnest ) and ' Barkis is willing ... ( from David Coperfield)? Those were the days. We tried at understanding and modified to suit our own usage.

Oh my, what a disgrace to us teachers. These 'robot' teachers will churn out more 'robot' students who only chew facts and spit them out when needed, never digesting them in the first place. The new syllabus that is revised every now and then (which makes it simpler for EVERYONE to pass) produces more low quality graduates (I stress on MORE and not ALL lest anyone gets heated up reading my comment).

Al-Manar,
The teaching profession has been under attack for quite a while. In my younger days the joke was;
If you can, do
If you can't, teach
(further we normally add this line)
If you can't teach, teach those who are going to teach.

It is just a light-hearted story which should prompt some serious rhought. It is good to see another visit from you.

I do not criticise teachers in geeneral. You quite right say that our system has cause the current situation.

Those gods of education sitting high up in the clouds, designing and redesigning system, rules and orders, are the main object of my criticisms in general.

You have commented very truthfully.
Thank you cikgu.

Your 'younger days' cannot be any younger than mine. We are looking at the same scenerio from a very much similar background.

'If you can't teach, teach those who are going to teach' remind me of the children's simple game when two of them place their hands alternately one on top of the other, pinching the top of the other's hand. Then sing "Enjut, enjut semut. Siapa sakit naik atas"
Remember?

Please come again my friend and sign 'A N Other' at the end; so that I know you
you are the same person.

Al-Manar,
I just have to share this. My youngest is all excited to be a third former this year, to be in a new class, having new company and new subjects to be challenged. Yet, when asked what's new on that 'exciting day', she said the first thing mentioned was the PMR date.
I would prefer that the kid's excitement be prolonged with a different approach. PMR should only be made a consequence, what new knowledge to be expected in form three should be the order of things to excite the students to seek out more. Teaching perspectives has indeed taken a tumble.

The date of an examination a year ahead became an excitement! I wonder what message the teacher intended to send. Should we be happy that our children are so mitivated to look forrward to an exam?

I share your wonderment.But you and I may be out of date on new psychological approaches of teaching. Do not be surprised to learn that children may not have to go to school to study. Stay home, enjoy your mum's apple pie and enjoy your study.

I hope to see more personal notes from Wan F.

I share the the same Geography teacher with CfS's Mama and we love her dearly.

Plus Mum was a geography teacher who LOVED geography!

So, I guess, in this instance, some of us are born very very lucky.

All I do now to promote this lovely subject at home is to have good atlases, globes and geography quizzes in the house.