remember thirteen years ago when I asked for your permission take Ana to stay in our house?” But he has long gone.
not imagine how Ana, one of his children, could make it in her PMR examination unless she could be spared from having to struggle to share the burden of the family. To earn money the family prepared breakfast foods for sale at a number of the village coffee stalls. Being the only helping hand in the house, Ana had to spend her evenings helping her mother and could only start doing her school work after nine. When other children were still in bed she had to be up by four to finish the final preparation, steaming and frying and wrapping cooked the food in small packages of banana leaves and old newspapers. By six her father had to ride his old motorcycle to deliver the finished products to the coffee stalls ready for villagers to buy on their way home after their ‘subuh’ prayers at the mosques/suraus.
classes at Almanar and had shown to be promising. But it was a job for the little girl to fight her drowsiness and keep her eyes open. It was then Pakcik discovered her problem, and that prompted Pakcik to seek her father’s consent to allow her to stay in our house for the whole of the three months preceding her PMR examination.
house to tell us that she had made it. She had graduated from a university. She was no longer the little girl (see my Part 1 of my ‘End of the tunnel’ series posted on 21/6/2008 – click here)
her dear father has gone. Life is easier for the family. Four years ago she began her career in Tawau as a teacher at a technical college. She did not mind being there as the extra allowance was a big help.
wedding. Of course we would never miss that. Yet, while Pakcik was heading for her house with Makcik and two grandchildren, what appeared to be a desparate call came through my hand phone. “ Pakcik, jangan lupa hari kahwin saya hari ni ! “ ( Pakcik, please don’t forgotten my wedding day today !” Did she do that to everyone?
photo. 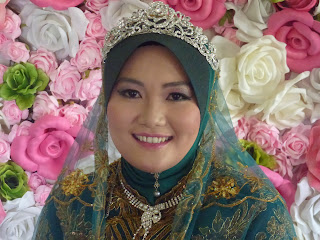 (Congratulations !)”. I can only have prayers in my heart.
of her visits to our house a year or so ago. Among the people around her in Tawau she was known to be a good cook. Regularly she prepared ‘nasi dagang Terengganu’ on order.  It was an extra income, she said with a smile. And Makcik still remembers today how well Ana could prepare certain ‘kueh’ even when she was a young girl in our house.
Ana was another girl we lovingly call Neni. Yesterday, while Pakcik was finishing up this entry she came over. She is two years ahead of Ana. She does not call at our house alone any longer. Yesterday a one-year old boy was tagging along and her husband as well. She is a nurse working in Perlis, and I am pleased to hear that she intends to further her studies. Even on a short three days’ leave home to see her parents she did not fail to call on us. 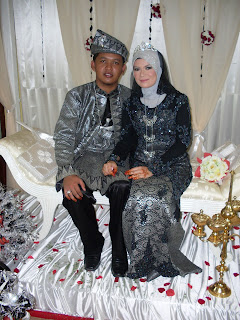 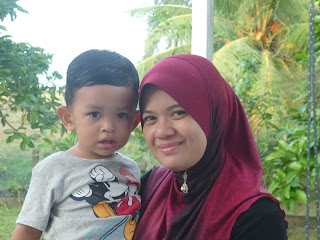 in these young people? We have our little investment in them.

Dear Pak Cik,
These examples from Al-Manar bears the testimony of your selflessness in serving Allah by serving the ordinary mortals. Indeed the rewards will come in life hereafter much more than the rewards of satisfaction in this worldly life. My congratulations to you and Mak Cik.

Dear Pakcik,
I said it before and I'll say it again. I love this kind of stories. This is a success story as also the previous ones.If made known it can draw in more new entrants. The new ones may not know of success. They know that they too can succeed if they are aware of these kind of stories. A Success Corner where all these stories are pinned up can do the talking. That can help draw them in but more importantly to help sustain their stay. I think so!

Not withstanding the hard lives these children has gone through, I know how much heart and sacrifice babah too has put in over the years for them.

I write all these to fill my time with some hope of exposing to my readers that life for many children are harsh with little future to hope for unless we are ready to give a helping hand, no matter how little it is that we can offer. Let us not think of rewards here or hereafter. We will get what we deserve.

Your suggestion is good and we will think about it. I have used success stories during conversations with those children whom I feel will need to know as inspiration; there is hope for everyone as long as there is a will.

Babah used to have three small ones just like what you are having today. It was not easy to say the least to build them over the many years. We had to remind ourselves of our full responsibility and to have unlimited patience, couple with a lot of love to give; only to be able to sit back today and enjoy our fruit of labour.

On the other hand what I am doing now at Alamanar is nothing like what we had to go through with those three rebellious ones. Then we had NO choice. It was always TAKE IT with no LEAVE it. With this group I have the option of 'LEAVE it'. But seeing some signs of gratitude from them is gratifying to us, fuelling us to carry on.

Even if we feel that all is well we never know that there are rooms for improvement. Perfection is HIS only.

As salam pakcik, you are so blessed and in return reaping nothing than what really deserved. your stories were so inspirational and candidly told. can i use them in my lectures? pleeeeeeese!

Of course you may use this. Knowledge should be shared and not have any copy-right. Informing the ownner is a curtsey. Thank you, my friend.

I am sure each and every of Pakcik's students have interesting stories in their own right. I hope to cross paths with some of them some day and have their stories re-told for future inspiration...

I am officially suggesting some book titles for you to consider Pakcik for your upcoming inspirational best-seller.

A TUNNEL OF LIGHT

Perhaps not the best of titles, but it can get the ball rolling...

Thank you. On my part I hope that all what you aim for in your new year resolution will be achieved fully plus fast recovery for your patients.

Indeed, one of these days you may run into one of them; who knows it can be at one of the many restaurants you frequent!

You sound serious. What exactly are suggesting, writing a book or an extra title for my blog? You have obliged me on many occasions and am very thankful to you.

Dear Pakcik,
Very often you prod and push the rest of us to the road of discovery. Here I am returning the favour.

Life can't certainly be more fulfilling and satisfying than seeing success in those people in whom we have our investment, however little it may be. May those who have been helped and succeeded also have the willingness and opportunity to help other needy people.

Begitulah hadiah atau sumbangan yang kita dapat tanpa disedari hasil korban terdahulu. I always believe no other task than teaching in ALL its categories can give that satisfaction much later without our expectation or dream. You embarked on the noble cause later and yet the satisfaction comes 'bercurah-curah' seperti cerita-cerita yang sdr berdua huraikan dari masa ke masa. We salute you. I know how it feels... Thank you AlManar for recounting the past and the present.

I cannot thank you enough.

We do what we can. If I had your skill at planting I think I could make some money out of my two acres of land, half full of lalang.

You are living a life full of activities after doing the good cause. And here I am trying to catch up, knowing fully well I will never be able to achieve what you did for so many years when body and soul were fresh. Thank you for the encouraging words to fuel the aching spirit to push on.

I remembered well those days when my elder sister has to sell "choklat nissan" (sweets made from gula Melaka) to enable her to pay for her daily expenses and sell duck and/or chicken eggs to enable her to pay RM 15 (her monthly school fees in Sekolah Menengah Tengku Bariah). My younger sister carried on the tradition selling "fried mee" at Sekolah Menengah Panji Alam..
I fared a little bit better as I managed to go to Boarding school.
Luckily for my two sisters.. my mother did all the preparation herself.

You have in your family a good real story of a very typical a lower/middle classfamily in suburban Terengganu. Spin something for our readers to see what life in Terengganu was those years - very simple but one that we reminisce with joy that despite all that we are what we are, heavenly better.

Our monsoon is bad compared to the relatively mild ones of the previous few years.

What you are doing makes me feel small and indeed serves as inspiration to give and reach out more. Alhamdulillah and may Allah give you and Makcik the will and strengths to continue with this noble cause.

You are doing fine as a celbrity for five Aces plus the school work which I know has incresingly been dished out. Our own three Aces have themselves become celebrities leaving us free to reach out more than you can right now. Insya Allah, do not worry, you will be in nour position sooner than you realise.

I realise that your words, Pakcik are like little doas and prayers for all of us.

Remembering your first e-words to me so long ago, I realise how far we have moved on and expanded our universe a bit.

Thank you so much, Pakcik.

You are generous and deserve generosity. I thank you.

The cat has somehow missed the boat...but better late than never, eh? I am intrigued by that girl now living in Tawau. Perhaps we can seek her out when we go there next. But Pakcik, we may knock on your doors again soon.....just waiting out the monsoon. purrrr....meow!

You are welcome to scratch or shin up trees, knock our door or stay the night our tree house. Without warning of any visitors the two of may be out hunting for food somewhere.

Thank you my friend, Al-Manar for comments in my blog lately.
I am 81 now, the only sickness for me is Cholesterol. I am taking arovastatin 5mg every night before bed.I also take 4life tablets a food supplementary. So far so good, and I am happy with that result.

I see that your are doing charity works, giving free teaching and homes the for the less fortunate. Very good work !! Perhaps I can contribute something. Give me your account numbers, I will be glad to add some sums into your coffer.

That is for now, God blesses and take care.

Thank you for this very special visit from a true senior blooger, beating me hollow!

Your intention is honourable. May God bless you with more time to devote yourself to Him.