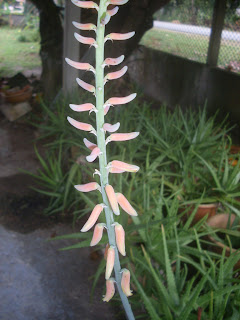 So Aloe Vera and Lidah Buaya are one and the same. One silent reader rang me to say that he had heard of ‘Lidah Buaya’ but never thought it was what he had known as Aloe Vera.And from the few responses we know this wonderful plant had so many uses. Ninotaziz told that the plant does bloom but very rarely. As a matter of fact, a few day before I wrote my Aloe Vera posting I was greatly surprised, when while helping Makcik watering her plants one very hot afternoon, I saw 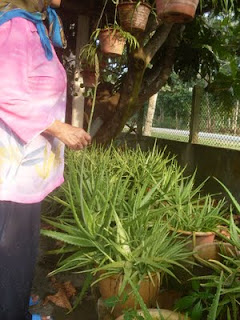 a long stem sticking out from one of the aloe vera pots. I immediately called her and she was equally surprised. After about ten years or more we took it for granted that aloe vera was good for anything else but as flowering plant. 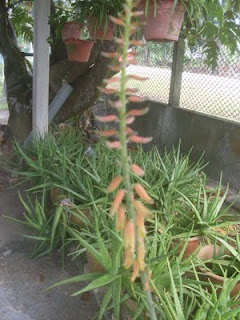 The flowers grew pinkish and after about ten days the flowers remained as close pods and wilted away. We will have to wait for another ten years to see the flowers again!

So, dear visitors, grow this plant for decorative purposes as well as all the medicinal values as we have now learnt from the comments. I thank you for the feedbacks.

Dear Pak Cik,
I didn't come into the fray earlier as I'm not one with green fingers. I've heard and seen the Aloe Vera but only those already processed and peddled through direct selling years ago. Supposedly a cure all for many ailments. I didn't pursue it either way

Dear Sir Hank,
I am sure they would be beautiful to paint - a series perhaps.

Something to think about. After, Van Gogh had his Sunflowers and Irises.

We have two Chinese neighbors who are rather well versed with medicinal value of some plants and they use to exchange info with my other half.. I found out that the Chinese has documented most of the uses of the plants ;))

I do not have green fingers nor do I enjoy planting plants. But I am required to help watering them when the days are dry, not an enviable job I must admit. I have not posted about this aloe vera thing because I like it - just my curiosity at a time I think the blog needs less 'serious' subject.

Nor I notice Ninot has suggested something for you to do. Poets and writers have all the fancy ideas!

We will see if Our Hank takes the bait.

Since we have pots and pots of this plant would you ask your other half to share with us the secret recipe she has acquired from the Chinese neighbours? We will give you free 'lidah buaya' in return.

I’ve lately began a weblog, the information you provide on this website has helped me tremendously. Thanks for all of your time u0026 work.

Dear Ninot Ma'am and Pak Cik,
My gosh! I remember Pak Cik once before and that’s how Rainbow came about. Now I’m having real fun at Rainbow.

Ninot Ma’am comes now with a ‘taller’ order. Thanks Ma’am, I think I will. Though sketches take longer to complete but I think I will. Have to create a separate ‘painting blog’ to make it more organized.

Aloe Vera as a theme sounds chic. May also think of an additional theme with ‘splashes of colours’ to catch the eye. I think just 2 themes should be ok. Yes, 1 a month will be 12 per year. 1 a week will be 52 a year,whew! I hope I can survive!

A favourite local writer I very much admire is the late Adibah Amin (Alfatihah). She and two others wrote a set of five volumes on English grammar for secondary schools. I have been using this truly first class set at Almanar for over ten years. One of her other books I enjoy reading, a novel, is titled This End of the Rainbow. Now, you have been successful running your Rainbow. Would this end of rainbow not provide the ‘splashes of colours’ you need? It is just a wild idea. I wonder how many colours the beautiful rainbow has.

Selamat Hari Raya to you and family.

A new weblog? Please email me the address. Am glad to be of help.

Assalamu'alaikum AL-MANAR
You could probably name that particular aloe vera plant Lidah Buanga. You might want to apply some fertilizer to it, dengan doa, it will not take another ten years to show off its unique flowers again.

Assalamu 'alaikum Abang Ngah,
While you and Kak Mah are busy with your aloe vera may I wish you both and your brood a Selamat Hari Raya? May Allah bless you good people with His bounty and may you and your aloe vera flower in more Ramadhans to come.

Me, I only have Mother in Law's tongue (lidah buaya?) in the garden.

We never cease remembering you in London, praying that all is well. Panjang umur berjumpa lagi.

What a pleasant surprise it is to see our 'little' girl is now joining her accomplished parents, writing. We hope to see more of her articles.