On the page for 31st August of my 1957 diary, my entry carries the following baffling line:

“Am I happy to see Malaya’s Independence?” – yes, MALAYA it was.

That was written 13,000 km away from where possibly the greatest national event of this country was being celebrated; Pak Cik at a young age, lonely and feeling being left out. 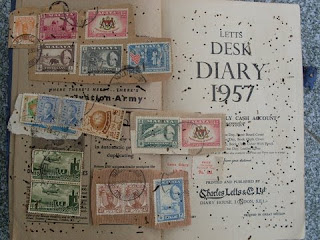 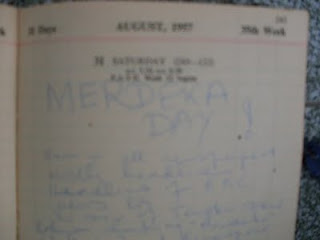 As I read and reread that line and try to fathom the depth of my feeling 52 years ago, I am convinced of one thing. I was being possessive. I did not want to lose MALAYA, tanah tumpah darahku. It did not matter who would govern it but I wanted that country intact as I had grown to love, enhanced by the distance that separated it from me at that very instance. I did not know whether Merdeka and Malaysia would carry anything meaningful to my future.

Today, my fortnightly lunch group consists of just four regulars, two Malays, a Chinese and an Indian. Not many years ago there were four Malays, two Indians and three Chinese in that very special and closely knit group. The number has whittled away. In time, like the ‘sepuluh budak hitam, there will be none. All of us would have been Malayans as much as Malaysians today. Nothing would change, needing no spirited slogan to keep us together with love and respect, drawing our spouses along.

And Pakcik would want my Almanar pupils to learn from that, patriotism in its essence.

Dear Pak Cik, the title says DARAku - is that intentional?

Salam Merdeka to you anyway :)

Zendra
It needs a lady to spot that without an ‘h’ the word makes a difference in meaning. Blame it on my Bahasa Melayu. I will try to be more careful with my Bahasa next time. Thank you for being the first to see it and alert me sebelum yang memalukan menjadi satu perkataan lain.
Salam Merdeka to you too, dear Zendra.
Pak Cik

Was there a missing "h"? I did not notice. I was too engrossed with your great record keeping. I bet there are many great untold stories in them! I don't believe many archived their diaries intact and for so long. Shamefully, I'm one of them who did not.

On this Merdeka day, may you continously enjoy your fortnightly lunch group for as long as possible.

ARZ
I had the missing 'h' replaced the moment Zenbdra kindly pointed it out. Old diaries can be a liability if you write enthusiastically too much what is best left unrecorded!The way you keep your blog is safe for Mimi to have it published one day.
Likewise may you be endowed with sufficient strength for a long time to continue ridiing and recording your exploits .
Pakcik

Sir, Splendid indeed to be able to read again what you have written in the Diary. The Merdeka Day. On that auspicious day I was there at the Kuantan town Padang as a Boy Scout standing proud watching the Union Jack been lowered down and the Federation of Malaya flag been slowly raised. It was one proud moment in my life. I could vividly remember that great moment in our history. But as years go by and with the politician making a mockery of the celebration I found that the Merdeka Day celebration on August 31 seems to be soulless. I believe this is because our independence Malaya [Malaysia] has been stolen from us by the politician who thinks that they own this country. Sad indeed. We have to regain our country back and give it back to where it belong, to the Rakyaat [people] of this beautiful country that we now call Malaysia.

We have to see that the next generations of Malaysian vote wisely and see that no political party be given to rule the country for more then two terms a time. We are already seeing change and I hope that we continue to change as we move forward.

When we were young we think Malayan centric and because of that we are color, race and religion blind. That is why like you I continue to enjoy the friendship of all Malaysian irrespective of who they are and enjoy every minutes been with them.

Would love to meet you when I am next in Terengganu. Have a nice day.

I am very pleased to have a seasoned blogger of my era giving a glimpse of what happened on that day, 52 years ago and 13,000 km away from me. I appreciate your views on the political scene which to me is all but too confusing. I am sure you would agree that, at our age, alhamdulillah, our concern is not so much for ourselves, but for the loved ones. It will be my pleasure to meet you in KT on one of your visits here.
Pak Cik

What have happened since then that dilute those easy atmosphere between Malays, chinese and indians? What have we learnt or rathere unlearnt after Merdeka? Are we advancing or retrogressing by way of social cohesion and respectfulness?

Deep in me I am conservative. I think a country like ours, having varied cultures and religions, needs what the old President Soekarno used to declare as 'guided democracy'. We need to have elections but the government in power should have the provisions to rule with certain amount of toughness - be it in the form of ISA or whatever.

I am happy to note the similiarity between us. Tun Mahathir have been exactly that and he brought a lot of good the the Nation. However towards the end of his tenure, too much power corrupts; cronyism set in, favored groups were apprarent and the general Malays got fedup, felt repressed and felt sidelined.

Pak Lah seemed like God-sent with his liberalism and this was summed up in 2004 Election. However he failed to deliver. He opened up the Pandora's Box and all the bottled up evils got freed and created so much friction in this favored land that almost toppled the 'messiah' as in 2008. Now all the hard work is up to DS Najib. Once the devils are out free, it is not only them that needed to be bottled up again but all the mischiefs done since..

DS Najib inherited a melting pot and is battling it alone. His generals does not seem up to the mark to fend against the fred devils.

Gukita,
As a mortal I have my political views which I choose to put aside as I focus my attention to the ongoing problems at the level of school going children of my neighbourhood. This alone has been keeping me fully occupied and giving me some measure of satisfaction.
Pakcik