Here was one person I consider myself very fortunate to have come to know for twenty years with high degree of respect. He was a gentleman , very sincere and one who spoke his mind. Above all he was a very loving and caring father.   Sadly, he passed away on 3rd November leaving behind his wife and 15 well-raised children. He was Cikgu Ali Jusoh, a retired headmaster and an extraordinary novelist. (AlFatihah for him) 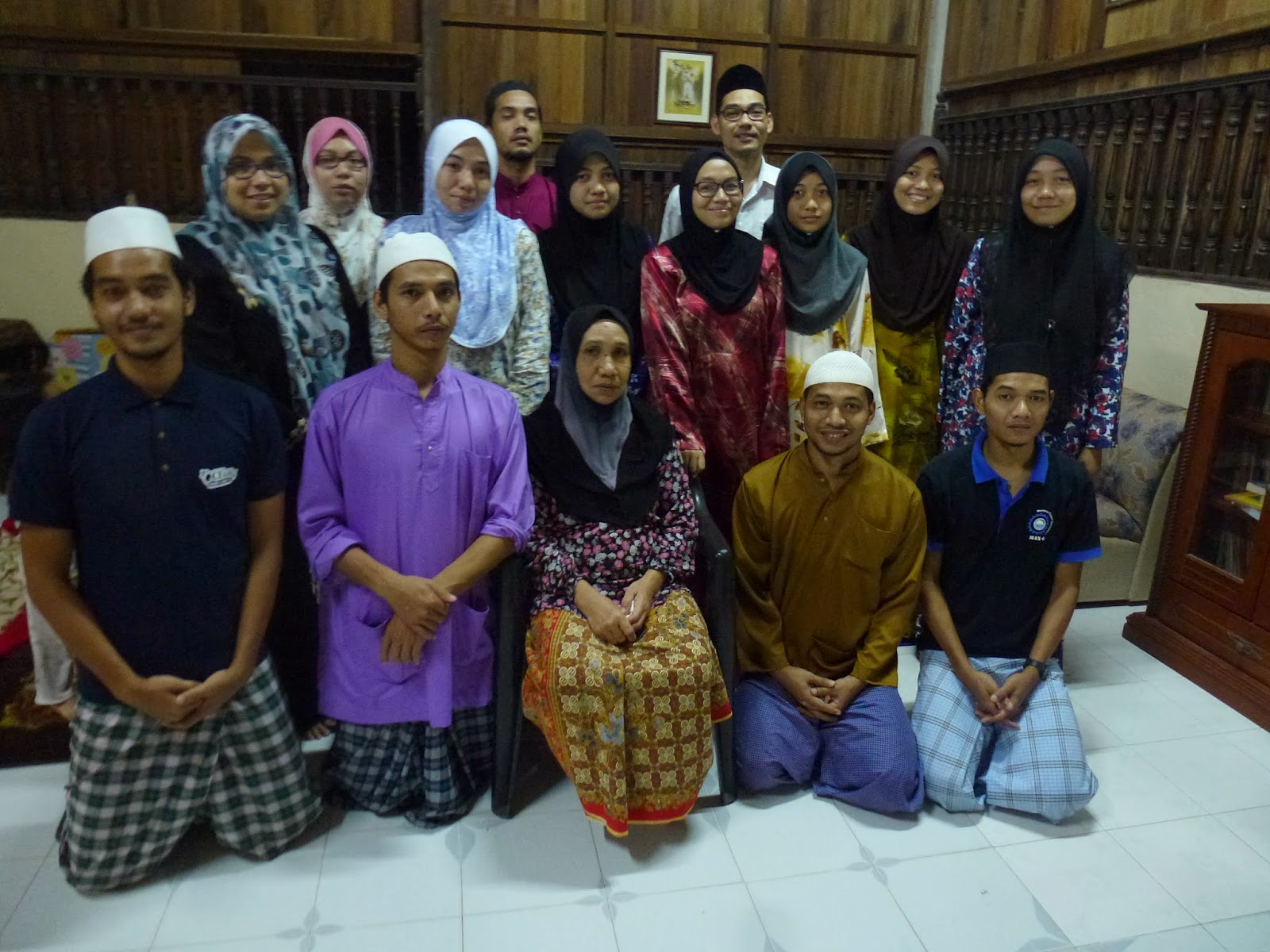 Mother and 14 children
(15th not in the picture)


Arwah Cikgu Ali wrote more than twenty Malay novels. Of all the many awards he received for his works, Alor Miang topped the list, for which he was honoured  with the coveted Sako 3, a prestigious national literary award named after Ishak Haji Muhammad, or better known by his pen name Pak Sako. 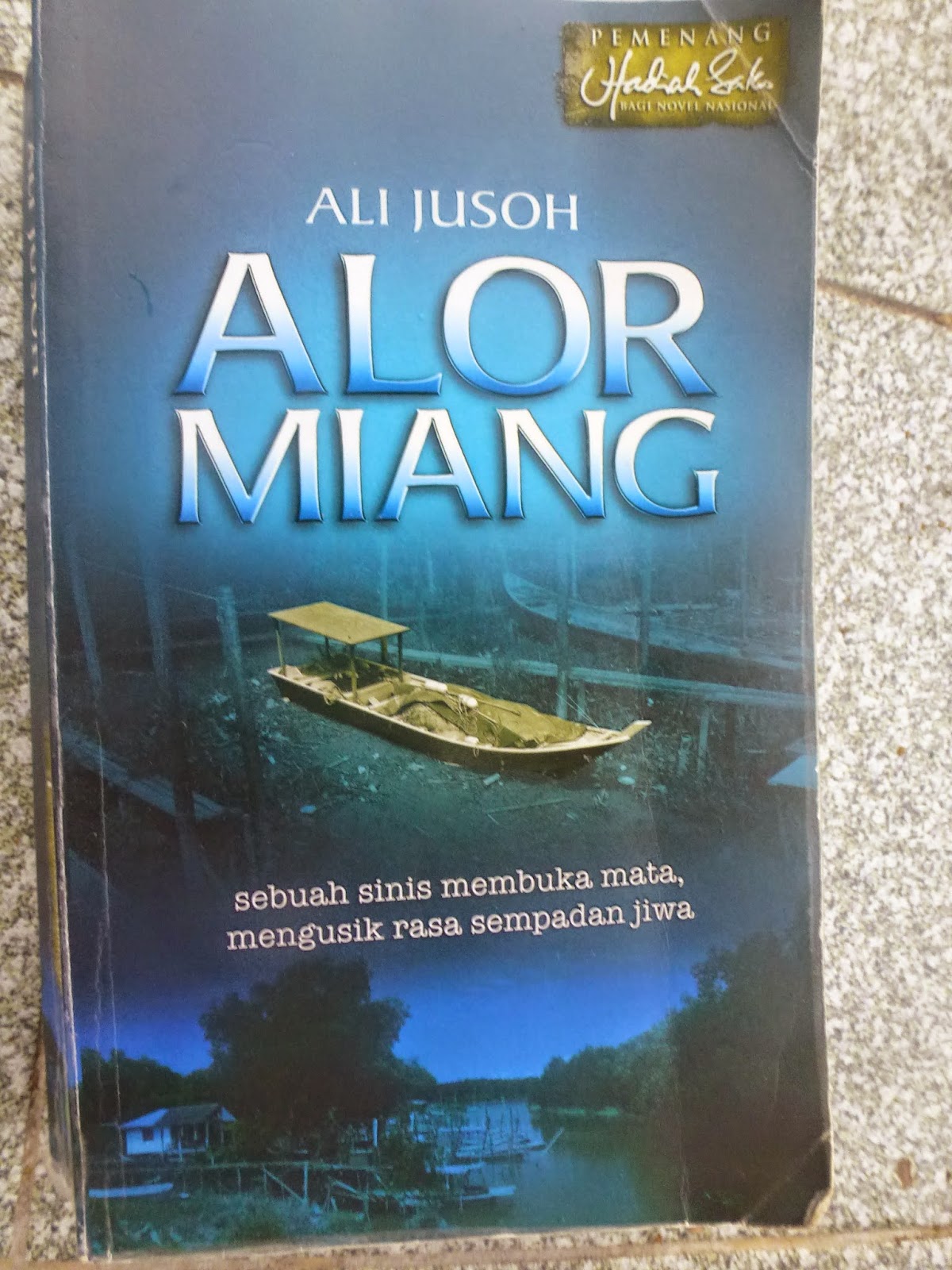 
However, personally, I know how he felt about his latest over-540-page Orang Orang Perang, published just weeks before his demise. The pleasure of having completed the book was tremendous. 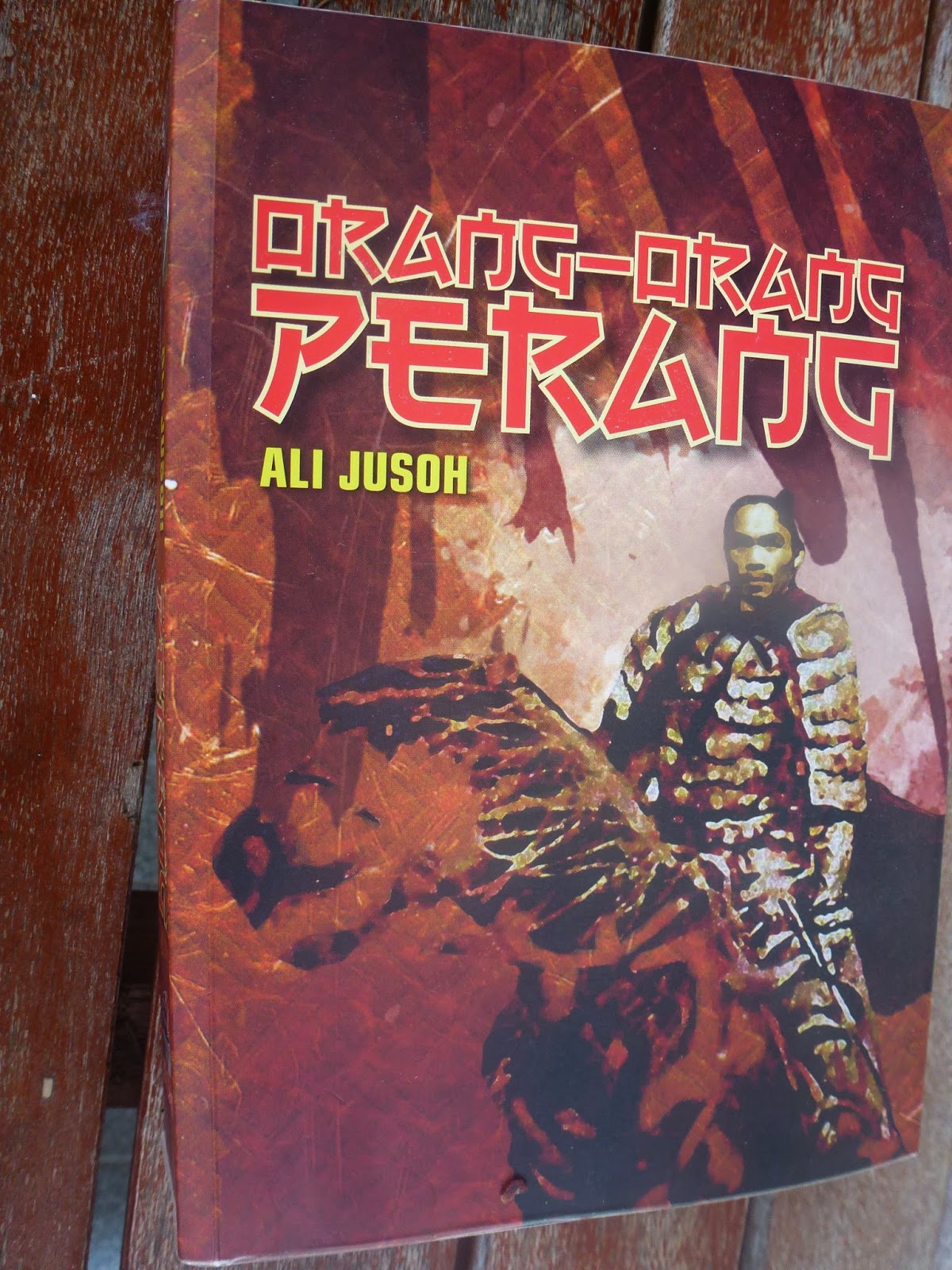 Orang Orang Perang (last piublished)
It was a couple of weeks ago Pakcik, on his request, drove him on a sentimental journey along the upstream section of Terengganu River, where a number of historical events took place. Among others we visited Cheng Ho Memorial, an old building constructed in honour of the legendry Chinese Admiral Cheng Ho, a Muslim. The theme of his last book was based on the life of this historical figure.


And it seems like yesterday when, while driving in town, his voice came through the phone with excitement.  A few copies of his latest book had reached him. I was to drop by for my copy before being high-jacked by others
_______________

To avoid making this a long posting I may, one of these days, post a note on why I believe he judged his last book, Orang Orang Perang, to be his best achievement; and I will write why Alor Miang is not just an award winning novel for him but one book very personal to me.


Arwah Ali Jusoh often expressed his enthusiasm in training young novelists, several of whom owe him success. To my mind he was a born writer, not needing tertiary education to be what he was. I cannot help believing that characters in his novels were of real people and so were the events and environments. He often told me how he made trips up a hill, into a jungle or down a river to study the environments. He was adamant that one should not imagine the feeling of being in jungle at night without experiencing it, camping overnight if necessary. One should feel the serenity, the rustle of leaves, the buzzing of mosquitoes, the sight of the moon, or the lack of it, among the leaves.


It hurt me deeply, during the last year of his illness, to see a novelist of his calibre sitting idle with plenty of time on hand, sadly unable to use his fingers. What he could compose in his mind could not be translated without the use of his fingers holding a pen or striking the type-writer keys. Recitation was never an option for him.


How did I get to know this wonderful person?


Way back in 1994, a good 20 years ago, it was my ‘hijrah’ with Makcik from KL to KT to start a new phase of life. A couple of months after settling down Pakcik decided to start my voluntary tuition for the needy children. My small tuition Almanar building was about to be built but I could not wait to start. My first thought was to begin with a small number of Standard 5 children. For that purpose I drove to the nearest primary school, about 3 km away. At the school office I requested to see the headmaster, whoever that might be. It turned out to be Arwah Ali Jusoh whom I had never mat or heard of.


Without being asked for the reason of my visit I was ushered into the HM’s office. With a smile he gestured me to a chair and he sat himself in one.  I told him briefly the reason for seeing him; to request for a small group of Std 5 children, stressing my preference for those from needy families. That person must have studied me and understood what I wished.


That was the beginning of my 20-year friendship with that headmaster. When I subsequently knew of his writing skill I began to have dreams of being a writer as well. Finally, I completed a two-sheet type-written essay (that was my pre-laptop era!) and proudly handed it to him one day. Soon after that he dropped by the house. Pakcik knew He had read my master piece and was about to give me his comments, nothing short of high praise, I anticipated.


Then came the bomb-shell. “Haji, tulislah saja dalam Bahasa Inggeris. ( addressing me – Haji you are better off writing in English.) he began. Then, while placing on the table my two-sheet work, which was now full of lines , scribbles and circles in RED ink, he went on (in Malay), “ This is not the Malay way of writing. It is English. Even your Malay spellings are all wrong, Zaaba’s era!” The man was no-nonsense. We understood each other well enough. What a blow to my ego that was!


He had plainly told me the truth. Thence, I ceased to dream of becoming a novelist. 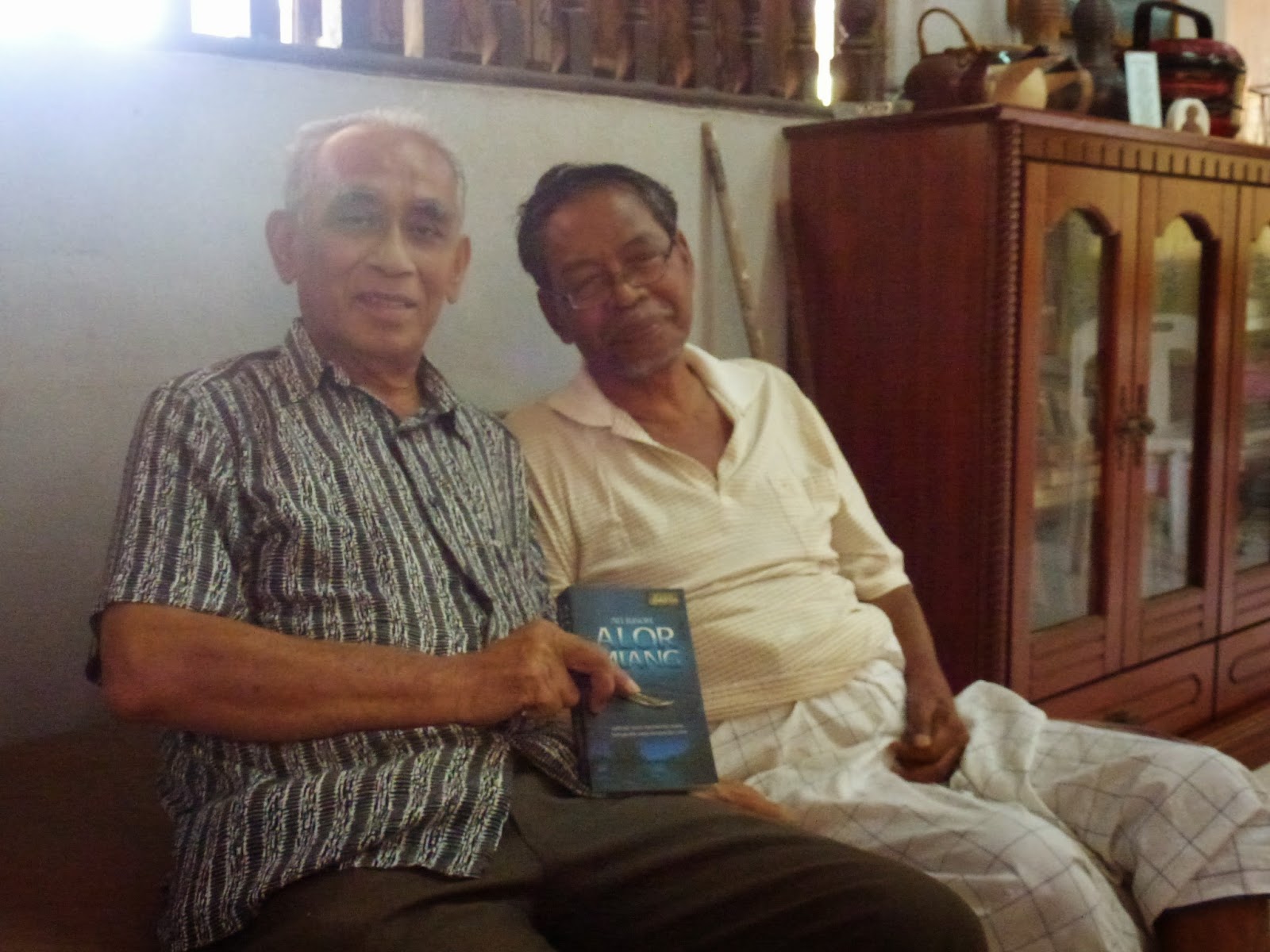 With his Alor Miang 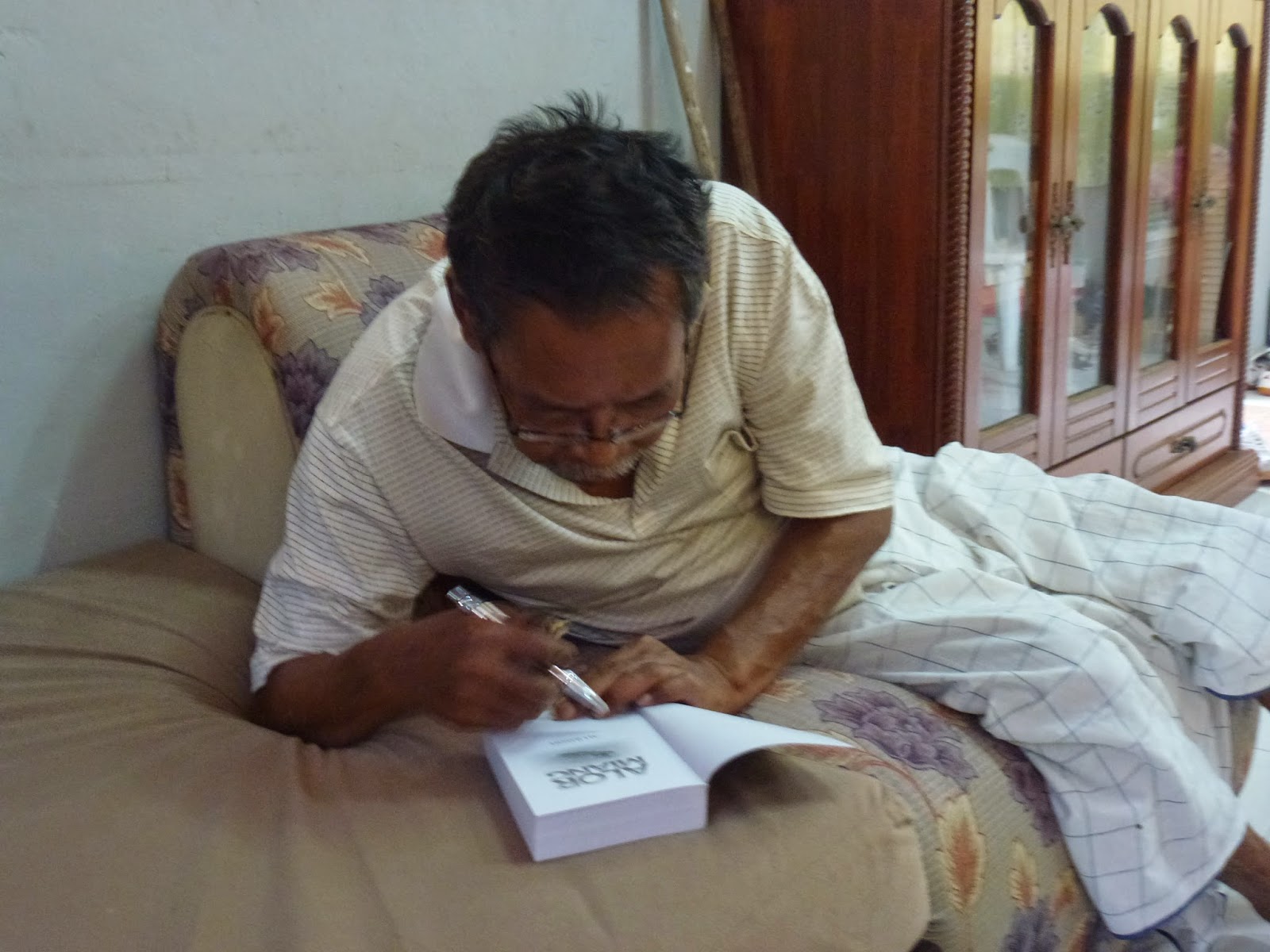 That was Ali Jusoh. My prayers go with him.

I may not know him. But I can feel that he is indeed a wonderful person as you mentioned.

I pray, May Allah blessed him, forgive him and place him in Jannah. Aameeen.....

As we think well of those who have gone before us, we pray we ourselves will be thought of as well by those behind us. You seem to be very much in touch with colleagues of your past. That is a good enough reason to think that you would be missed and remembered with prayers. Salaam PakMail

I would suggest his award winning Alor Miang. It is more like a historical novel, based on the locality he was very familiar with, which coincidentally is the locality where I am.

When you have had the chance to read this book, plase email and tell me what you think.

Naniasda,
Waalaikum Salaam.
Here is an opportunity for you to post something' like your Good Earth. Get that Alor Miang and write what you think. I can add a few comments for you to think and write about.

Dear Pakcik,
Al-Fatihah for Allahyarham Cik Gu Ali. It's just amazing how one could excel under such tremendous odds, unlike nowadays where there are facilities. !His strength of purpose was the driving force. You've been lucky to have been together with Arwah on many things
Btw I wish to apologise for being behind on my comments lately. Been up to my neck liaising with my publisher these past weeks for my 2nd book. Did only hit and runs posting but with little comments. Done with the manuscripts now waiting for the galley proof from them. It's more or less 90% of process done, Alhamdulillah!

Seeing your enthusiasm in updating your blogs I had expected to see your second volume in record time. You have improved so tremendously, often way beyond my simple comprehension. I wish you all the. I am thankful for your occasional visits and kind words. I get my enthusiasm from readers like you.

Wish you all the best, my good friend.

It appears my earlier comment on this subject did not get through. However I read yr story with clearer impact realizing yr association/harmony wit Che Gu Ali. Truly he has been a great help initially and later a tower of strength for his guidance and achievements. How we wish in our journey we continue to meet with people like him. Only last week I visited an old friend whom I came to know way back in 1949, an ex army officer and confident and energetic and suddenly now at home, quiet and unable to remember or do anything.Only several weeks ago we were happily conversing on the phone and now ....Yes your story about Che Gu Ali registers similar emotions.Thank you. I was trying to remember whether I have met Allahyarham in my earlier time. Salam to you and Family.

I wonder why I have not been able to get into your blog. Thank you for your optimism which I do not have any.

If you email me I would be able to communicate somehow.

Your travel has brought you places and enabled you to know so many people. Hope you will again meet those you care in your life.

I am having problems with streamyx and all because of the current bad monsoon weather over here.

I have never had peace of mind with my phone a streamyx. Cable stealing goes on merrily with apparent inaction on the part of those concerned. And now what you have probably read my area is one of the worst hit by the flood. One bridge north from our house is till under repair. I have complained to Telekom and nothing has happened (promising action in 24 hours!) I think your earlier comment has gone the mysterious way. I regret for this.

While we have been experiencing the monsoon rain you seem to be enjoying your trips and excursions, nevertheless. We all have our share of good and bad times. Hope life continue to be kind to you and family. It is sad to hear of the situation faced by your old army fried. 1949 is a long time ago!

Long time no see. Missed you

Thank you for your greeting, short but most welcome. I wish you would drop in more often to make a pleasant company, expressing ourselves freely. Would you be kind enough to email me? I need some information which I think you possess from your past experience. Thank you and my mail is- almanar@pd.jaring.my


It is nice to hear from Texas again. Hope all is well with you and family. I wonder where your daughter is working now - hope back home one day. Yes, get one copy of Ali Jusoh's books for a quiet reading.

al fatihah
without reading this i dont even know his contributions. may Allah give him blessing. I will try to find a copy as well :)

I wondered what had become of you. I am glad to see you back posting new entry.

Now that you have got your degree and earned yourself a job, it is time to start contributing. This can be in different forms. Email me if you are short of idea and I will let you have some for a small fee.

The darkest corner most of all.

I have not had the chance to read Allahyarham's books. But I will actively seek them out now.

Through your words, I realise one important element that could help me improve my writing. If I had the courage. To live the story.

It has been my pride to tell people who follow your work that "We know her and family. Many years ago, when she was young, She picked a cutting from our pepper plant at Nuri but failed to make it grow! No she is one who needs neither salt nor pepper. She has had it all, and more."

With love from us to all of you, the Aces especially.