Had it not been for you

I parked my car and walked into the shop holding an old novel to be photo-stated . A young lady sporting a light blue Malay dress and a matching scarf was looking at a photostat copy which had just been handed to her by a shop assistant.  It looked to me like a form, perhaps a completed application form.

Conscious of my standing beside her she looked up only to find Pakcik’s face looking straight at her. Instead of shifting her eyes away a surprise look of recognition broke in her face. Almost instantaneously she opened her mouth to give a soft cry;  “ Ooh, Pakcik Hassan … !?” , then followed with “ Lamanya tak jumpa ! ( I’ve not seen you for so long !).


Her feature began to look familiar, and that word “Pakcik” told me who she should be, one of ex Almanar children. I was quick to change my surprise to a gentle rebuke , “ I am not surprised if you do not recognise me. You have not bothered to contact me after all this while.”


That was a good line which prompted her to be defensive, “ Tak kan lupa Pakcik! Kalau tidak kerana Pakcik ajar saya Bahasa Inggeris mana saya dapat masuk UIA ! “. ( It isn’t possible to forget Pakcik! Without Pakcik helping to teach me English how could I join UIA ?”


So this girl, Aishah, had graduated from UIA and she went on to tell Pakcik that she was having some document prepared to take with her to UK. In about one week’s time she will be starting her Master’s degree at Hull University.


I am sure, she could never appreciate, nor could anyone else, how her impromptu declaration (of my help in teaching her English) meant to me at that moment. I am not ashamed to admit this. Aishah rewarded me enough with those few involuntary declaration.


Now I am able to reflect on this girl, Siti Nor Aishah, a young orphan, who, together with a few others, joined Almanar Form One tuition class in 2003. She completed SPM at the end of 2007. It was a credit to me and to her continued effort to finally earn the elusive ‘A’ grade in English. That, with her good SPM results in other subjects, earned her a place at UIA. And now she is proceeding to Hull. 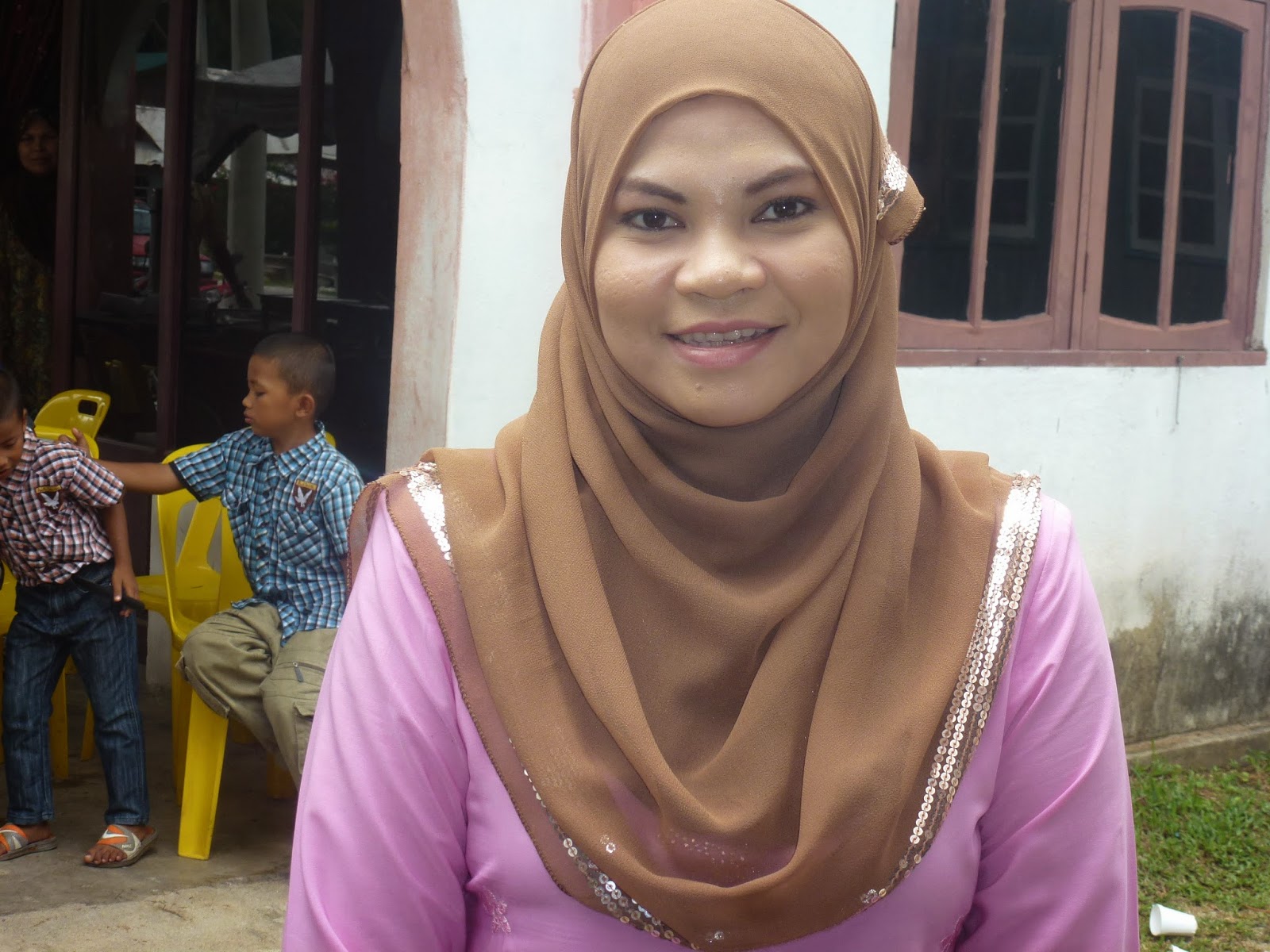 
Reminiscing the time she was studying at Almanar, she said, “Mother used to scold me whenever I failed to attend one Pakcik’s class. ”  Aishah realised how much  her mother, a single parent, had wished her success in education. That is what has inspired her to come this far and to go further.

On the second day of Hari Raya Qurban Aishah’s mother had a small party. Pakcik and Makcik were too happy to be there – to bid her farewell.  Insya Allah, we will, before long, be seeing more of her, a lady with high education.

It's these moments that makes you realize that what you're doing has made a huge difference in some lives! I'm glad you ran into her, Pakcik!

Pakcik, she started her intensive English course with you in her Form 1 and how badly I wish that my son whom will turn to 13 years old next year could join Al-Manar. I see his potential, but I am not good enough to be his teacher. Kalau dapat tempias berkat Pakcik pun, syukur, Alhamdulillah.

That makes me think that maybe Al-Manar could offer a short intensive English camp during school holidays, perhaps?

How so wonderful to see success bubbling with enthusiasm right in front of your eyes.It cannot be any better than that, more so from a most successful orphan. She'll continue to do her Mom proud. How satisfying to you Pakcik to be part of the equation in her seeing to her development. I like these kind of stories! Well done Aishah and congrats to Pakcik!

It is an occasional encounter like this makes our efforts very rewarding.

It is nice of you to call here. I will drop you a line. Please send our regards to {Patricia.

Aziela,
I do not for one moment imagine your boy having problems like these rural kids. Their exposures are different. Additionally, you are a professional in human management. What I find to be the main problem in common among these children is the counter productive time spent on hand-phones which now offer so many entertaining features. If only these children are made to love reading there is little danger of children doing badly in school.

Yes, drop by with the boy and Pakcik will 'jampi2 sikit'!

A few of such encounters now and again do help make our work seem worth the while. I am sure I would have your satisfaction if only I had a bit of your skill.

Writing this series ( End of the Tunnel) is something I enjoy because it is all about human, and realisation how lucky we and our children are.

By the way, during recent raya I accompanied my dear hubby to his ex-teacher's home. He was his math teacher about 30 years ago. They never met after SPM 1985. Immediately when he salam the teacher, the teacher mentioned his name straight away.....
Teacher with good memory of his ? good student..hi hi.

To make it interesting..the teacher's daughter is actually my ex-student. I thought her during her basic years to be a doctor. That was about 5 years ago...
sob sob..
She did not remember my name.

I need to learn more to be good teacher like you Pakcik.Who give lasting impression to the students..

To make it double interesting. My dear hubby and his friend gave an Ipad to this great teacher. Just as token of appreciation for all his effort, on the the recent hari raya qurban. On the way home, they got a message from the teacher's wife that actually it was the teacher's birthday...SubhanAllah...

Thanks to all great teachers out there...


It happened to me too Pak Cik. I still remember how angry my father was whenever I did not feel like attending your classes. Really we should not miss classes at Al-Manar, especially English class, the best English we could get for free. I really hope that some day Pakcik will come out with your own English reference book for rural Malay children. Take care Pak Cik and Mak Cik.

So I am not the only one with poor memory for faces and names. I believe photographic memory is a gift. Of course some experts may believe in certain technique to improve memory. I am sure being in medical field you know how memory works. Give me a run down on this one day when you visit KT for a cup of tea.

Salaam to you and hubby

I know you were a lazy girl and often wonder how you get to where you are - soalan bocor agaknya!

Your lunch invitation was on the same day as Aisyah's. We would have two lunches that day unfortunately. But your brother came to our rescue. The gulai was very good.

Thus the idiom 'You reap what you sow' .... Alhamdulillah and 'tahniah' to both of you.

sha othman has left a comment
Assalamualaikum.
Pak cik, I didnt imagine that you have shared my story through this blog. Alhamdulillah. I'm so proud and honoured being one of your ex students. Without your teaching and advice during the years there , I would not be who I am right now. I would like to thank you for what you have contributed to my friends and me to prepare for our future. Your contribution will be there my heart and soul. Thank you Pak Cik. Please pray for my success in Hull. Hopefully, I'll do even better here. Hihihi..Insyaallah..
Best wishes,
Aishah.

Aishah,
Waalaikum Salaam
You are a fine example of a person who is determined to do well in life. It is my pleasure to have you and friends in my class for a few years. Just remember us. Do not forget to call on us whenever you are back. In the mean time I expect you to visit this blog and leave comments from time to time. All the best to you, Aishah