The number of children joining tuition classes at Almanar has, much to my dismay, dwindled over the last few years. Some years ago I used to have to deal with an intake of around 40 Form-One children. That number would go down to about half or less by the time they sat for their Form Three (PMR) examination three years later. It is Almanar’s open policy that children who show no interest should leave us voluntarily, or else would be asked to.

Three years ago the intake into Form One dropped to around 20. And early this year the figure dropped further to just 16 children, seven of whom were boys. Believe it or not, it is pathetic to see that  today that small number has run down to just FOUR – without a single male.

One would expect Pakcik to be totally despondent over the situation. No, the good side of the situation has, instead, placed me in an enthusiastic mood. After all I still have other classes and I am expecting a new group to join Almanar classes before the coming end-of-the-year school holidays.

The four girls prove that they are worthy of being given help and attention which would enable them to stand a good chance to advance academically.

Let us look briefly at these four special girls. We will identify them as Nor, Nora, Norma and Normadiah 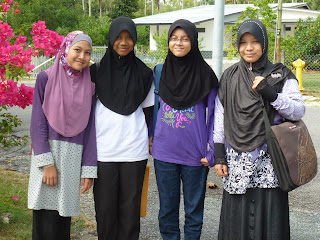 Nor’s family is no stranger to Pakcik and Makcik. Her elder sister is a successful ex-Almanar pupil, married hardly two months ago and working with a bank in Selangor. I have known her father, a tractor driver, ever since we moved here twenty years ago. From time to time I rely on his services to clear the thick bushes growing outside our perimeter fence. Nor scored 4 A’s and 1 B in her UPSR examination end of last year.

Nora
Nora has an elder brother studying in the same school which runs on two sessions, morning classes for Form One and Form Two, and afternoon classes for Form Three and higher. Following Nora’s unusual absence from Almanar classes for two days and my subsequent enquiry into the reason, I found out that she and her brother had not been to their school as well, simply because the one bicycle they shared needed repairs badly.  Despite adverse circumstances Nora had to face she scored 3 A’s and 2 B’s in her UPSR.

To alleviate Nora’s current problem Pakcik immediately helped her to own a new bicycle. In return I had the satisfaction of seeing the delight on her face and her mother's. I am certain, knowing there are people who care, Nora will have greater motivation to work herself harder. 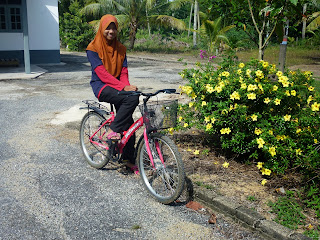 Nora and her new machine

Norma’s father passed away eight years ago. Doing some odd business to earn a living her single mother dotes on this charming girl, being her only child who shows an early promise to succeed in her studies. To prove herself to her mother she obtained all A’s in her UPSR examination last year.
______________________________

Pakcik will relate what happened three years ago.  Makcik had just returned home from a short trip to London. During her stay there she was taken by Awang Goneng and wife for a meal at a Malay restaurant. In the course of conversation with the restaurant owner’s family, Makcik mentioned Pengkalan Maras where she came from.  At that point the restaurant owner’s son-in-law excitedly mentioned that one of his sisters was at one time a pupil at Almanar. On her return Makcik related this incidence to Pakcik; but without proper name and time Pakcik could not figure out who the sister was. Subsequently, it was Normadiah who told Pakcik recently about her having a married elder brother working at a Malay restaurant in London. The girl referred to by her brother was an elder sister to her. What a small world it is.

But there is more to it about Normadiah than just having a brother in London. She is number 14 of FIFTEEN siblings. This is an all-time record for Almanar. I only know of one family (nothing to do with Almanar tuition) with 14 children.

Last week Normadiah did not attend class as she was required to stay by her father’s bedside at a hospital after undergoing a surgery. Some years ago he retired from the army. 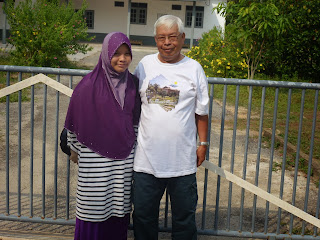 So, these are the four girls I currently have  in Form One.  Every one of them deserves to be helped. Exhibiting the right studying attitude gives Pakcik a much greater pleasure to teach them than a group of forty.

They are my very special Form-One girls.

Special indeed, Pakcik. And they demonstrate a lovely history with Al-Manar that shows continuity despite the reduced numbers.

I guess here is where the saying quality, is better than quantity.

And such lovely names, all starting with the lovely Nor or 'Light'...

Dear Pakcik,
I'm glad! The potential is there, strong potential in fact. With your expert help they'll soar! I see contenders for the End of Tunnel series. Gems waiting to be polished. Agree with Madam Ninot, quality counts!

Dear Pakcik,
Sad to note the number of students at Al-Manar has dwindled and what with English going to be a compulsory subject for a student to obtain a certificate for SPM soon. Anyway all the best for these four young ladies, without a doubt they too will be successful graduates from Al-Manar with your unconditional help.

Do you not sense tht this posting is an attempt to make up for the lost pride? So I jump up readily to agree that quality is better than quantity. But deep in me, Ninot, the number in need of help is latge. So quality of a few is not enough. It is the uncaring part which concern a large number.

Nur - light, not by accident. Nuri and Almanar come from the same root-word - a reflection of my love for the Surah, 'Al-Nur' of the Quran.

As I said to Ninot above, nothing can truly compensate for the large number of needy children. But we can do that much.

Your blog is no longer Malaysian, my admiration, Hank

I dannot afford to lose them at my age, can I?

I do worry about our children. Now that I am a free lancer, I work quite a bit of PR work for various efforts to help the Malays and Bumiputeras.

The statistics are staggering and we are constantly playing catch up, not as Bumi per se, but as the larger lower income group.

And that is scary. Education, and surprisingly, quality food, is key.

And of course quality time…

But of course this is common knowledge and common sense…who am I to go on and on about it.

may Allah bless you Pakcik. :)

The smaller the group, the better would the exam results be, insyaAllah.

It iis a good question who you are and who I am to tackle those foreboding signal among our young ones. It is partly this realisation that spurs me to push ahead irrespective of discouraging situation faced.

Try your best dear Ninot, setting examples to your children.

Your visit lends support to whatever we do at Almanar. Use my email (on my profile page) if you have a more personal message or suggestions to give. Thank you and you are welcome.

You speak from experience, I am sure. I notice you have been meeting old buddies. How pleasant it is to catch up with those from our past.