Unusually early for visitors, two ex-Almanar pupils turned up at our home, both wearing sad faces.

“ Pakcik, berita tak baik. Nor Haliza meninggal, (Bad news Pakcik. Nor Haliza has passed away.)” The two girls burst out almost simultaneously, letting off bottled up emotion, and eyes beginning to brim with tears. 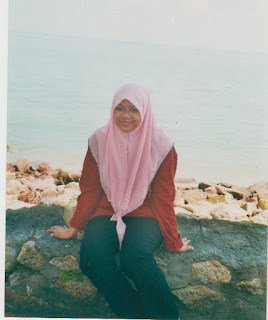 Happy days by the sea

Nor Haliza’s father pensioned from the army about twenty years ago. I am fortunate to have Pak Hashim’s three children attending classes at Almanar. The eldest of three, Azmi has just qualified as a dentist after three years in Indonesia, and is now waiting to be posted, hopefully at KT general hospital. The third, Azrol, is a medical student at a local university.

On her way home from work, this charming 25-year-old lass was knocked down in a road accident involving two motor-cycles, leaving her in a coma and she never regained consciousness; just a couple of months after sitting for her final degree examination and barely a month from her convocation. 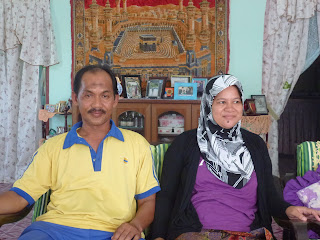 Parents - mission accomplished
Sadly, we have lost our only daughter 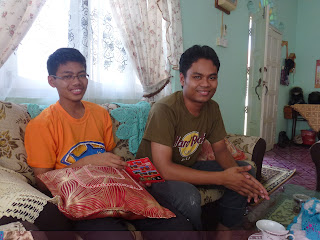 
This is a story Pakcik was hoping to write one day, that of a successful end-of-the-tunnel series. I was confident to see three winners in this family. Little did I realise that I would be sending my second ex-Almanar pupil on her final journey. ( My first was End of the Tunnel Pt 17 – click here )

I could hardly hold my tears when I saw the vehicle leaving her home on her final journey after a small group of us said our prayers in the home she was talking of leaving. I used to have a dream that in that small house there would live an aged army pensioner and wife, and three offspring, a dentist, a scientist and a medical doctor. No, it is not destined to be.

Alas, we can't win them all.

I have said goodbye to two of my loved ones. May Allah have mercy on them. And my condolences to their families.

It's very painful to have lost someone that we loved.

Dear Pak Cik,
Inna Lillahi Wainna Ilaihi Rojiun and Al-Fatihah. My condolences too. Being mortals, we are only human. Man proposes and only Allah disposes. We can plan, but finally it is Allah who knows what is best for us. Those who Allah loves most leaves us earlier than us.

Salam Pakcik, al-Fatihah to arwah Haliza. May her soul is placed among those fortunate ones in Jannah.

At about the same time you lost a dear old classmate with whom for years you studied, played, fooled around, went for field training and finally started life as adults. There can never be another such relationship. I have lost an ex pupil whom I chose to give free tuition which helped her through her academic years. All the same we both feel the loss. Such is life.

Ameen to your doa. I hope your charity work for the furry animals is a success. Our Cat-f-Sydney is a great one for this. She must be busy up some trees in Tawau or somewhere.


Dear Pak Cik
Inna Lillahi Wainna Ilaihi Rojiun. I'm sad reading this. Arwah had so much opening up for her. It would have been such a joy and such an outstanding achievement for both alManar and her parents to see 100% success brought on by the 3 siblings.I'm sorry! Al Fatihah!

It is human to feel what a waste this has to happen. But do we really know the possible unknown? Talkdir Illahi we say. He knows best and we have to rely on that belief. Alfatihah to the passing of your old buddy, Hank

Dear Pakcik,
We just got back from the deep jungles of Pahang when we read this story. Allah SWT knows best for what could lie in store for the deceased... al fatihah for arwah Haliza.... purrr...meow!

Assalam Pakcik,
while sending Alfatihah to the arwah of Haliza, i don't think words could ever described how you and the parents must have felt deep inside. eventhough i m sure all your commitments and sacrifices wouldn't go unmark in the book of good deeds, but a loss at this juncture is just too hard to take, but Pakcik! Allah's plan has never gone astray, may the soul of Haliza be placed among the souls of those of the highest degree of the iman up in the heaven and MashAllah Pakcik! there is simply no rectitude in what you have done for these kids. MashAllah!

True enough as Pakcik said to Haslinsa above, you were up some trees in Tawau or somewhere. Hope you managed to catch up with Mat Kilau's clan.

I have forced my brain to work out what T-T stands for - and there is nothing that makes sense! TST, TOT, TAT, .....

Indeed there are times we have to accept events philosophically. I am sure your lectures cover this kind of topics as well. Thank you.

T_T is a visual expression.

Pakcik, you see the two eyes crying down a face tak?

For a moment I thought the T is for Telinga and the - for mouth; listen first and talk! If the - is placed higher than T then it would mean you talk too much, listen first!

hahahaaa!!
*oh dear, I shouldn't be laughing too hard, this is a sad post..*

It's perfectly in order to laugh at such an ignorance. I did it myself after knowing how much I need to learn at this age.

It is always a sad thing to see a young and bright spark being extinguished by a careless road accident. I do hope the brothers would continue with the success and serve their parents honourably.

Al-fatihah. May Allah swt shower the soul of Nor Haliza with forgiveness and blessings.

An accident and its consequances on its victim are not human's voluntary plan. What matters is what goes on after. Members of Haliiza's family seem to have accepted it well and their future looks equally bright. They must have learnt something from the tragedy.

Takziah to the family, and Allah is the All-knower of life's secrets.

May Allah's Magfirah , Rahmah and pleasure be with Haliza. May Her family and Abang Hassan family be pleased with Allah sokmo

Innalillah and Al fatihah..life goes on but death is always near

As a doctor you know this fact better.