What a coincidence indeed it was that on the same day two young ladies addressing Pakcik as ‘uncle’, made two similar pleas that Almanar would accept their contributions in memory of her parents, in the first case, and her father in the second. The two families of these two ladies came into Pakcik's life when the two of us, a newly married couple, landed in the small town of Jesselton ( now Kota Kinabalu ) way back in1964. However, like us Datuk Ahmad Badri and his family were subsequently posted back to K Lumpur where our friendship continued, leaving Datuk Suhaimi and family as Sabah permanent citizens.
____________________________________________

Time flew and before Pakcik and Makcik realise
it our 40th wedding anniversary was fast approaching. It was then the sleeping memories of our good times in old Jesselton came alive. The memories of our honeymoon years were too strong to deny a revisit. In short, we decided on a visit to Sabah. To complete the picture we took along our daughter and two of her four children. She had the right to be there because it was there she was conceived, and she was the first to give us the right to be called a family.

In K Kinabalu, many of the old landmarks had gone or been replaced. Many others like the good old Jesselton Hotel were still there. Above all there was Datuk Suhaimi and his family as the icing of the cake.


In brief, it was literally a teary reunion between two long lost families. 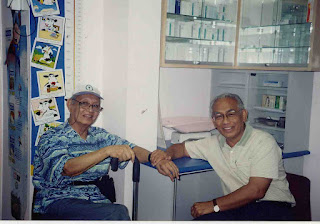 Until the end of time 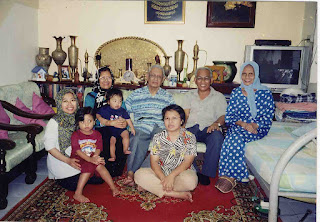 Parts of the two families

Kak Zainun, as we call her, was an exceptional lady.She is an accomplished cook.  We can never forget those years in the 60’s when she used to run cooking classes for young wives from Peninsular Malaysia, and Makcik was one them. She is the owner of the cake shop in town, the Bits and Bites, where one can sit to enjoy her specialties. She has been running this for thirty years. With a number of helpers she has all her cakes and so on prepared in her house which is almost a food factory in itself.  Of our nostalgic visit she managed to wriggle out the reason behind it. True to her nature, knowing that it was our anniversary, a beautiful cake was skillfully prepared, waiting for us to arrive at their home to cut it. 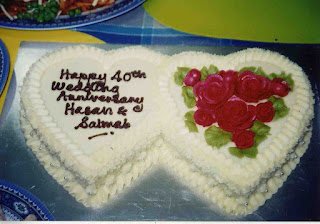 With love from Bits & Bites

Sadly, just about one year after our nostalgic visit Datuk Suhaimi passed away. I will always remember this very dear friend with Al-Fatihah. He has left a family who look at others with compassion. One of his children, a doctor, makes time to take care of cancer patients apart from running her own clinics.

Since the demise of Datuk Suhaimi many parties have approached his family for manuscripts and information on this very special man who dedicated his life unselfishly during his long service in information, radio and TV, beginning in Brunei to follow with a long service to develop radio Sabah during the colonial days to retire as the Director of radio and TV in Sabah. During his days in Brunei he had spells of service with BBC in UK and Australia in the 50’s. I would like very much to write the life story of this great person, inadequately recognised during his life time; a life of loyal public service.

Dear Pakcik,
As you had promised and I was looking forward so much to this. Here it is! How nice!

A first person account is such a gem. it provides the anecdotes to fill the gaps of history with so much compassion and memories which only one who was there could recount. I love this kind of rare episodes which I presume may not have seen prior prints before. Thanks so much for sharing Pakcik!

Yesterday is for remembering,
Tomorrow is for dreaming....

alFatihah buat Allahyarham. May Allah swt bless his soul and his family left behind.

Congratulations on your 40th Anniversary too and my salam to dear makcik.

Memories od those in the these two postings are very dear to us. For one thing the main players are gone and together we all were away in a place far from home. Even the name of the town itsel is also just a memory - no longer on the map.

You can do your in haiku whatever, Hank - and now our friend AHS.

Thank you. Now we wonder will there be many more anniversaries to enjoy or nonee. We all live with hopes and prayers that all our future will be meaningful in every way.

As usual, a beautiful entry indeed. May Allah bless your friends and give them a place in Jannatul firdous.

My family and I were in Sabah for the first time last year, visiting friends in Kota Kinabalu and Tuaran. Had fresh seafood almost everyday. So, your next anniversary will be in North Wales and stay with us.

ps: will reply to your email soon.

happy anniversary to both of you Pakcik..what is the exact date?

Because of Aberystwyth Univertsity the mention of Wales awakens pleasant memories. Let's see if Pakcik can make a short entry of that chapter in family life. Thank you for the kind thought.

Thank you. My entry of last 15th August 'Pakcik reminisces ( Pt 25 b) - The gift' was dedicated to that event.

Thank you for such a warm posting. Its was really a great pleasure to make both Uncle's and Aunty's big day a memorable one. That was the least we could do in return for the warmth and priceless hospitality given by both of you to us,whenever we were in KL.We hold dear to our heart those wonderful memories of days gone by.

It is also a great pleasure, too, to read your blog, which I've been following for quite a while :)))Which I find very interesting, which reminds me a lot of Arwah Abah's writing. There were so much similarities in you both.

So Uncle , keep on writing and keep us entertained , especially of those about Al-Manar, ya.

Abok,we are ever grateful for the good time we always had with you and family. We are sure to see you in Kuala Terengganu one day soon. But we cannot promise you a cake.

Our love and Salaam to mum.

Mum sends her regards. Was happy at the same time, sad ,reading Uncle's posting , as it brings back memories.

Really looking forward to Kuala Terengganu visit, which we've yet to cover, the East Coast of Peninsula, which I greatly believe is very rich in culture & traditional craft - my weakness:)))

The least we'd aspect are cakes, unless its the local traditional ones, typical of East Coast - itu anytime!!! More so kropok ikan , leko,.... anything local:)))

Before I end, would like to take the opportunity to Thank all Brothers & Sisters for their kind wishes for Arwah Abah.May Allah swt. Bless Them Always. Ammeen.


Salam Uncle - it's me,Rina Badri... finally - brave enough to leave you a note . Your writings remind me of Abah - the way the story is told...I have been enjoying your blog for quite a bit now and those were very kind words you said about Abah and Mummy, Uncle. Thank you. .. And that photo! J that was soooo long ago. I was probably four... Now, I am blessed with a wonderful husband and a ten year old son, Ariff.

Back to the photo, I remember those holidays we used to have with Uncle, Aunty and family at Frasers and Camerons. Life was so simple then, as a child... and now as an adult...there are so many things to cope with – and for me especially, there is no more Abah and Mummy to run to for advice and comfort... and to borrow money! hahaha... But Allah has been very kind to me, Uncle, HE has given me a good man... now it’s my poor husband that has to cope with me J.

I was very close to my parents Uncle – I guess the benefit of being the youngest girl and having lived with them for almost forty years. I knew who their friends were and who they were close to. Abah and Mummy often spoke good words of you and Aunty and how they admired the good causes that you and Aunty have been doing and still doing... they had all the intention to visit you and family in Terengganu but I guess somehow didn’t get around to doing it...Insya’Allah Uncle, I will take up that offer you made to me and will make my way to Terengganu one of these days with my family.

It was good to speak to both you and Aunty the other day :) Take good care...

Thank you both for the contribution. May Allah bless the loved ones who have left us. Let us all pray for them always. The two of us, Uncle and Auntie, will never ever forget these wonderful people. The two of you are very dear and very close to our hearts. We would love to continue feeling this way, Abok and Rina.

With love from Uncle and Auntie