On 19.04.12 I posted (click here) about Arif. Being the fifth of his siblings to take tuition at Almanar he is special to me. Makcik and Pakcik have a special liking for this boy because he resembles Arif, one of our grandsons. For that reason we call this boy Arif (His real name Ermin). 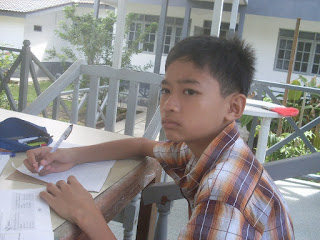 
Immediately after class at Almanar about ten days ago, he approached Pakcik to say that he would be joining the spelling competition (Spell It Right – SIR) organised by the NST.

Having seen it advertised, his parents liked him to join the competition. It appeared that his secondary school with 2,000 pupils did not know or did not care to encourage, let alone to organise a group. His principle was surprised to hear from him about his intention. He would be the only one to volunteer, thus representing his school whilst many other schools in this state had organised teams to participate. (Is there any wonder why I have such a poor opinion of the management of his school?)

I knew Arif wished for words of encouragement from Pakcik and that he got without reservation from me. Subsequently, we sat down to discuss how he should approach the competition. But I knew it too well that he would not have an earthly chance, a mere Form 2 pupils among the giants of secondary pupils from other schools. Many contestants from SBPs (full boarding schools) were seen to arrive with supporters in bus-loads.

I made it a point that I brought Makcik along to the competition and sat together with his mother and two elder sisters, ex-Almanar pupils. We were there bright and early, well ahead of others.

Contestant No 162 between mother and Makcik
There were well over 100 competitors. And there among strangers sat our brave Arif.

Before the competition started the Master of Ceremony asked all participants to have the position of microphone adjusted to suit their height and the head phone properly fixed. They were also told to say ‘hello, hello’ to be sure that the system was working satisfactorily.

And finally it began. Arif must have been about number one hundred to be called to the stage. I was very pleased to see him walk up with confidence, with No 162 clearly displayed over his chest.

Having fixed the sound system he surprised the audience when he said, “Good afternoon, judges.” There were involuntary gasps from the audience. The judges responded with obvious surprise and appreciation on hearing that pleasant greeting instead of the expected “Hello,Hello” heard from a hundred other contestants.

Much to our expectation our Arif did not win anything; but he won the hearts of many. He will have his chance one day, hopefully, for a much bigger thing in life than winning a spelling competition. He is Almanar’s pride, Pakcik's pride, one with spirit and true guts.

Alright Arif! What a breath of fresh air. Arif sure doesn't subscribe to the herd mentality that many others have, as demonstrated by his desire to participate in the competition when not even the school Principal knew. Also his handling of the sound system. Way to go, Arif. There's hope yet for this country. har har har *evil laughs*

Now, what has gone to my head.. I even subscribe to cat's comments above.. I for sure understand why Arif is a clear favourite in AlManar.. He sure make a difference!

Dear Pakcik, I am glad you went along for the SIR competition. I was the one who introduced the competition to my current school and last year, one of my students managed to clinch no 2 at the state level. This year I was too busy with other things and nobody represented my school. You may ask, what about other teachers? To enter the competition, you must diligently cut the forms (one form per student) from the NST and then fax them. For the last 3 years (since 2009) I scoured for talents (by asking other teachers' help) and asked the participants to fill and return the forms to me, and I helped to fax them to the NST. This year I was so busy with other admin things and at the same time I'd like to find out whether other teachers would do something about it. Well, suffice to say, there was no participants from my school this year. :(

Congratulations Arif!!!
Youu've won the hearts of audiens, even not winning the SIR.

He's any way a winner, congratulations Arif.. The way I see it, he's matured beyond his age, wise and brave too. Tumpang berbangga dgn anak Terengganu ni. Pls sampaikan my salam to him, and indeed will pray hegets another chance next time insyaAllah..

I am not sure whether you realise that your comment was posted at 12.27 a.m. exactly 9 minutes after the appearance of my posting. It is eerie to know that cats with their sixth sense never sleep, watching to mpounce on you.

Can I learn the sectret?

Alas, I do not even have a second one like him.

By the way, you suggested another word for my poem of the previous posting. Cikgu Humairi produced a superb poem very much carrying what I wanted to say but in a totally different way. Seeing the two versions I realise how 'uncivilised' my Malay poem is. I wish he would visit us more often, leaving comments in poetry.

I expect many teachers, if all is too much to ask for, to have the kind of interest for their pupils and their schools. In fact spelling is an activity that should be a must in teaching proper English to Malay pupils in the rural areas.

You did it out of what you thought was good for the children. Shouldn't the heads of schools themselves have that interest at heart? I see weakneses in school management today, simply because I have never been one!

Thank you for sharing your experience.

As I said to Ayoh Wang above there is only one of him I have, the one with guts. I truly believe that school management can do a lot in building children's self confidence in facing crowds. Reciting poems, oratory contests, acting on stage etc are what can be prioritised in schools instead of just games, running around etc.

pssst Am learning the art of deflection here.

Dear Pak Cik,
It takes rare courage to jump in. There'll be one winner eventually. But those who had gone through the works are all winners and may become one, one day!

That is true. At the end all those who go through may become a winner one day.

Alahai, this made me tear alittle bit. Honestly, I am simply too sentimental.

But I can't help admire this young boy's courage and quiet dignity. A sense of pride I am sure was instilled by those closest to his heart.

I can just imagine, what you must have felt Pakcik as he uttered the wonderful opening and greeting. Well done Arif, well done. What a little wonder you are to inspire us amidst all the thunder and hurricane of life in the background.

That was really a small incident, a rather insignificant one. But the way I saw it touched me. Isn't it like placing a piece of something under a microscope? Wonderful details will surface.

He has guts to try and that's what you want in them :D

This is the very area in which our children are very lacking, noticeably in the rural areas.

This brave Arif deserves to be praised. Yes, insya-Allah, he will one day have his chance for a much, much bigger thing in life than just winning a spelling competition.

That is how I feel; what is the loss in a spelling competition compared to greater things in life. But building character is essential in facing an unknown future.

Seeing your comment reminds me of an unanswered mail.

I am pleased to see you back here and hopefully in person before long.