Today, at three I was preparing for my afternoon class at Almanar. For want of time I had planned to do two classes concurrently, a kind of juggling from one class-room to another. Then my hand-phone rang.

“ Assalaamu Alaikum, Pakcik. Ini ayah Syaliza ( This is Syaliza’s father),” the voice began. Instantaneously I sensed what was coming. “Syaliza dah meninggal dunia ( Syaliza has passed away) …..” The rest was history.

The father himself chose to call knowing how close her daughter was to us. Syaliza Dhamira joined Almanar at the beginning of 2000, twelve years ago and was at Almanar for three years. A quiet and unassuming person Syaliza always wore a pleasant smile on her face and was in full control of herself. Quite appropriately she qualified to become a nurse at a university hospital.

As expected, three years ago she was happily married. Sadly, however, a year later Syaliza was diagnosed having a rare cancer. Just as well she worked for a university hospital which possesses cancer treatment facility. It could not cure her but that made it all easy for her. If only she had been given some more time she would have been sent for treatment outside the country. But that was not to be.

Over the last two years Syaliza never showed her illness. She was unbelievably composed when she first related to Pakcik of her illness. And three months ago she made sure that Makcik and Pakcik were invited to her brother’s wedding. 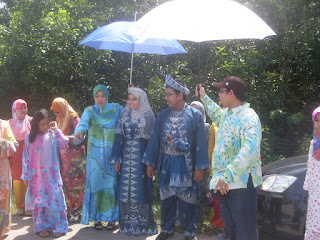 At the wedding of her brother, Aalim, intuitively I was more interested in recording her presence than the brother’s wedding. (Her brother, attending a better secondary school, was with Almanar too for a brief period.) I captured her presence without knowing that these pictures will be for us to look back at her with love and with prayers in our heart. 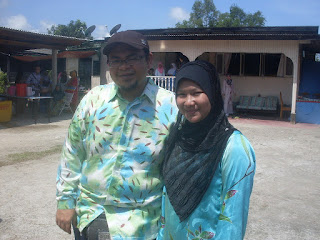 With her dear husband 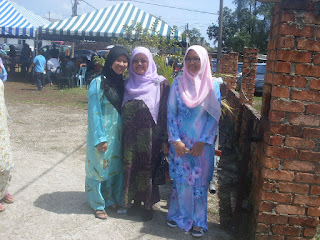 Never in the eighteen years of Almanar’s history it ever crossed my mind that one day I would be sending one of its pupils to the grave, as I did this afternoon. May Allah shower her with mercy. Alfatihah.

Dear Pak Cik,
Innalillahiwainnailaihirojiun! My heart bleeds for the family.You and Mak Cik had extended your strength and concern the best you could. Al-Fatihah

Innalillah. How many children did she have?

As Salam Pakcik,
Innalillahiwainnailaihirojiun..it is a shock when someone who is so much younger passed away and all of us will be heading to that final destination sooner or later, my most heartfelt condolence Pakcik.

I knew it is hard for parents to send off their children to the grave.. I guess it is equally hard for two of you to do likewise to your students. Then again death does not recognise age..
May Allah bless Syaliza Dhamira's soul and her tutors as well :)

I know you can make a poem of the situation - of longivity or frigility. All the best my frie4nd.

Sadly none. But we have to believe in 'hikmat' in all HIS planning. What, for instance, if a baby inherits mother's equally fatal strain? We are not that wise after all, are we, Daddy Zuki?

There is only one direction for all of us. But we should maximise doing what we believe is good for us.

She is so young but who are we to question Him? Anyway she's in a better place now, with no more pains and sufferings. Al-Fatihah.

But the pain on those she left behind will be felt forever. It teaches us to make the best of whatever and whoever we have now. Tomorrow may never come.Thank you for dropping by.

You have just experienced how life cannot be happiness all the way. A a spell of sadness will make us appreciate happy moments.