We have gone more than half way through the month of Rabiul Awwal. Mawlidul Rasul has been much talked about and discussed. Today I pick up one of my treasured books, The Life of Muhammad by Muhammad Husein Haykal. 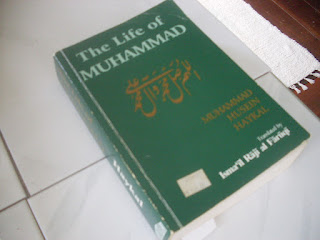 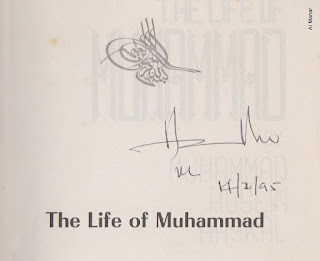 As I flip through the book and I reach Chapter 31 (page 504), The Prophet’s Burial. On the second page of this chapter I had some notes scribbled in pencil. Reading that I can barely hold back my tears. The scene was that of a total chaos, women crying near hysterical and others shocked and stupefied.

Umar, on hearing the sad news went straight to Muhammad’s bed, uncovered him and looked at his face for a while. He perceived its motionless and deathlike appearance as a coma from which he believed Muhammad would soon emerge. He found it hard to accept the truth of a great man he had so admired and worked for. So at the mosque he was proclaiming at the top of his voice, “Some hypocrites are pretending that the Prophet of God – May God’s peace and blessing be upon him – has died. By God I swear that he did not die ……. By God, the Prophet of God will return ……. Any man who dares to perpetrate a false rumour such as Muhammad’s death shall have his arms and legs cut off by this hand.”

Abu Bakr hearing the same news returned and noticed Umar addressing the crowd. He did not stop to listen to Umar but went straight to Muhammad’s body, uncovered his face and kissed it, saying, “How wholesome you are, whether alive or dead!” He then held the Prophet’s head in his hand and looked closely at the face which showed no sign whatever of death’s attack. Laying it down again, he said, “What would I not have sacrificed for you! …..”- such devotion.

Abu Bakr then returned to the mosque. Aproaching close to Umar he said, “Softly, O Umar! Keep silent!” He then went to address the crowd. After praising and thanking God, Abu Bakr delivered a brief address. “ O men, if you have been worshiping Muhammad, then know that Muhammad is dead. But if you have been worshiping God, then know that God is living and never dies." He then recited the following Quranic verse ( among the verses most dear toPakcik) : 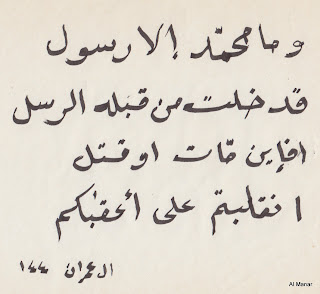 I have written above only the first half of the verse 144 from Surah Al Imran. Muhammad Asad gave us the following interpretation:

“ And Muhammad is only an apostle; all the (other) apostles have passed away before him; if, then, he dies or is slain, will you turn about on your heels? ….” He completed the other half of the verse.

Abubakr’s short speech, particularly the verse, worked like magic. The crowd listened to the verse as if they had never heard it before, now fully understood the stark truth. So that was that. The inevitable had to be accepted.

So what does that scene above tell us?

Do we simply keep on celebrating his maulid, without giving a thought what his life stood for?

And shouldn't we spare a moment to reflect over what the greatest man on earth had done for mankind?

Have we nothing at all to sacrifice, in our own separate little way, in honour of what he did for mankind?

MasyaAllah! This is also the part that sends shivers down my spine and made me shed tears. Those verses, as a reminder.. Abu Bakar, Umar, Rasulullah SAW.. I'm speechless.

Dear Pak Cik,
We cannot imagine how one enlightened soul had influenced the world. Prophet Muhammad(pbuh)is reputed to have moved and influenced the most number of followers.It's no small wonder when one is the messenger of ALLAH SWT.

Stories about our Prophet saw are often very inspiring, especially when we read about it with reflective mind.

There is little wonder why he (saw) has been rated as the most influential person on earth.

You have a good set of books on Rasulullah (saw), a worthwhile purchase for reference.There is no time bar for this sort of book, forever green; for us and for our children.

Dear Pakcik,
The Prophet's (SAW) last address on the Plains of Arafah in Makkah is the most remembered by all Believers especially when he said that as long as we follow the Al-Quran and the Traditions (Hadith Rasul) we can never go wrong was the most poignant of all. It is our Prophet's(SAW) message that we shall guide us till Doomsday. There can never be another prophet except Muhammad (SAW) and mankind now should hold steadfast by the two greatest legacy of ALLAH's Messenger.

Dear Pakcik,
Even trying to emulate just one aspect of his (SAW) life, i.e. charity, sometimes makes us want to throw in the towel and surrender. Imagine doing what he did in entirety. purrr....meow!

Akhi, that last sermon, not long before his demise, was the climax of his career. The essentials in Islam are there beautifully summerised. We are never short of gudance. It is just a matter of our willingness and readiness to sacrifice something of ours, be it our effort and energy, our possessions or our time.

Do you feel so at times? I do too. But we know we are running out of time as each day comes and goes. If only I had that nine lives! Hold fast dear lady.

Dear Brother Hassan,
Loved this inspiring post.
Met your son, Anuar, this (Friday) afternoon. He remembered that we have met and worked together on some procurement contract in Shell (Miri) way back in 1996/7 when I work in cotract & procurement, Petronas. At first, I only remembered his face but could not placed where we met... Thevhe said he is the son af AlManar...He knew I am one of your blog's follower .. I told him I had visited you..
It is a small world after all!

Fancy meeting my number 2. It never occurred to me that you had crossed his path before.

Thank you for yr inspiration and reflection esp coming from yr companion the book bought in 1995. Thankfully there is no dearth of books now about Muhammad SAW and other religious issues. So too the number of readers. Blessed that you are contributing to increase the number of ardent readers at AlManar too.Our celebration or remembrance of Maulid is made effective when we spare time to understand more of our prophet. " Wahai Jibrail, sakitnya mati ini. Bagaimana umatku mampu menanggungnya'kesah ini lebih sayu dan nyata sayangnya kepada kita! Sincerely hoping that our younger generation will take to reading and reap all its treasures.Assalammualikum.

In deaths, tragic events, failures and so on we can find lessons in life. More often than not we choose what pleases us rather than the hard reality.