What did P Ramlee say?

“ Kalau hendak melakukan qurban seekor lembu secara berkulmpulan, buatlah.” The speaker said. “Tapi janganlah membuat masalah kepada diri dan orang lain” ( If you want to perform the rite of slaughtering a cow jointly, by all means do it. But do not create problem to yourself and others involved.”

Makcik was listening to an Ustaz talking on TV early one morning a couple of days ago. Pakcik was reading a book, with half an ear on what was going on. Those words from the Ustaz interrupted my reading. I stopped to listen with interest. On matters related to accepted practices in religion he was against asking too many questions on whats and whys at the point of performing them. It would be right to put those questions for clarification while being taught in class. If one is being told by a person in authority what is good and he intends to do it, just do it without kicking up an awful fuss. Read your ‘niat’ ( be sure of your intention) and push on.

I like to make reference to a Quranic parable contained in Ayat 67 to 71, Surah Albaqarah, which begins with: 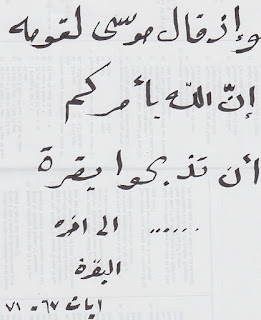 It tells how a group of people during the time of Prophet Moses were told to ‘sacrifice a cow’. It was to be performed for a specific purpose related to unsolved murders at that time. The requirement was just 'a cow' of any sort. Instead of doing just that, they repeatedly sought to know greater details regarding the animal. Ir went on from a simple cow to its age, colour, pattern etc etc until the final descriptions made it extremely difficult for them to find a cow so specified.

Ask too many questions and you get it, so to speak!

I wonder how many people know about Qurban as organised by Yayasan Kemanusiaan of Muslim Aid, Malaysia. For more information click Cat-from-Sydney.

Assalamualaikum.
Selamat Hari Raya Aidiladha to you and your family, Sir. Your story reminded me of the tale about two prophets, Nabi Musa dan Nabi Khidir.

dear pakchik, eid mubarak.
today is extra special for me. every one in the family, including 2 in the making, is here. no small achievement for a family of this size.
alhamdulillah...

Indeed, we see a number of such parables in AlQuran, stories with lessons to learn. That about the two prophets and, in the same surah,the story about the two men one of whom owned an orchard rich with fruit and all, are beautiful parables for us to reflect on.

That is fantastic. We have three and only one managed to be with us. So start blogging and share with us how you mnanage all these!

Dear Pak Cik,
Selamat Hari Raya Aidil Adha to you and family. We had a fair share of the excitement and goodness of silatul rahim as Shadah participated this year!

Assalamualaikum
Hope you had a splendid eidul adha. I remember our ustaz telling us the same story, the group that asked too many questions about the cow but in the end failed to make the sacrifice. Today, many people, including the highly educated youths, are so critical and ask lots and lots of questions about religious obligations, but in the end do nothing to show ahderence to His commands. This is a case of 'cakap banyak, buatnya tidak'. Salam bahagia.

I am pleased to hear that you had a fair share of excitement. Let us pray that we still have more hari rayas to celebrate.

Incidentally I do not seem to have your email address. Would you kindly email me, almanar@pd.jaring.my Thank you

I agree with your observation that too many ask too much and do hardly anything. We talk about Islam as a simple and practical religion. Then we start to get into unnecessary details making simple practices hard to perform.

dear pakchik, you don't give up easy, do you?..thank you pakchik. if you keep on pinching my ear long enough, we might get to see that blog yet, ya pakchik?

if i were to start blogging just to write about how i manage anything, it would be an empty blog indeed because i see everything good that comes my way as an act of benevolence from ALLAH. indeed we have to strive for all things good but in the end, outcome adalah kerja ALLAH.

You would be surprised. Life s stranger than fiction. It is all HIS plan, the good work is all HIS. And the faults are all yours. From there you can do wonders with words, making your readers cry or tickling them to near bursting. You are good at it. Look how you made me smile when you said I kept on pinching your ear!

It was a different raya qurban for us this year. Glad to know that you had an enjoyable one, the monsoon not withstanding.

Perhaps just to share something mentioned by the mosque committee official about rules that were put in place for the qurbani process, "Manusia ni perlu dikawal.... kalau tidak dia akan buat ikut suka hati dia sendiri." Quite an apt phrase, I thought.

BTW, I have received your email and would send a reply soon, after getting back home to JB. May Allah swt take care of Pakcik and Makcik Almanar...

The whole family went back to Pekan and Chenor for Hari Raya and tahlil. Rudy and Iman drove, it was quite tiring so closer to KL, my Mum took over from Iman.

Menziarah pusara was in order and good for the children, I hope these responsibilities are carried out by future generations after we are long gone.

I do not know how much Little Ikesha understood but she dutifully cleared the weeds and sat quietly in her corner of observation.

Afterwhich, on the way home, once again stories of Tok Nik, Moyang, To'Ki, Tok Yah and all who have passed were repeated to the little ones. It is strange that they ask for these stories - of some great grandparents grandaunts they have not met or known...

Dear Pak Cik,
I took the liberty of extracting your comments from my Rainbow and reposting here with my comments. Why I did this is because this got onto my 'Limericks' comments when it was meant for the 'The Game' posting about golf.

Your Comments:
What a finish! That looks professional. But, believe it or not, about forty years ago I earned myself the distinction of doing a hole-in-one. What I have today, in pleasant memory of the great fluke, is just a small cup with an old ball resting inside a small egg cup trophy for the fluke. It is a treasure I keep in my sitting room, ready to be proudly displayed to golfing visitors.
November 8, 2011 5:03 AM

My comments:
Getting a hole-in-one means lots of skills and lots of fluke, not just fluke.The trophy is priceless! You are one of the very select few privileged to be able to display it in a place of honour. Congrats is still in order even though this happened years ago. Congratulations, Pak Cik!

Knowing you, I am sure you have had a good Raya Qurban. You return to KT every now and then. So you need not worry. When there is an opportunity come over to spin a yarn. As you see C-f-S and her other half are no longer strangers to us. Our circle of blogger friends is getting bigger with good people.

What you quoted of the need for human to be control. I fear this may not go well with those who believe in freedom - of speech etc etc. Sadly, beri betis hendak peha. The disagreement and discussion over control can never end.

Thank you for the expected email response.

Kampong Awah,Chenor were a familiar road signs before the opening of Lebohraya Pantai Timur. And a couple of my Almanar pupils did go to the technical school there. Once we stopped at Kg Awah mosque for Friday prayers.

Not many families take the trouble to teach their children the practice of visiting older folks and familiarising them with memory of their nenek moyang. This is an old value worth reviving in children. Well done Ninot.

My apology for posting my comments wrongly.I have just corrected it. I was so excited to show off one of my very few achievements in life that I sank it into the wrong hole, so to speak in golfing language? You see, Hank, I can still remember the kind of jokes after a game of golf. That was why Royal Selangor had the 'Men's Bar' where ladies were barred from entering. I am not sure whether Ninot ever entered it when she was working there, listening to the jokes.

Dear Pak Cik,
'Men's Bar' as the name suggests is strictly men's. It's about the only bastion left standing that ladies clamour for but couldn't (even if some of them looked like men!)

Those days, ladies at the club were men-look-like, the like of men's and ladies' golf clubs.