More than 70 years ago a sweet sixteen was married to a young teacher, and two years later the couple was blessed with a baby girl. So much adored, being the very first, the baby was given a pet named, Ning. Following that came two baby boys.

When Ning was nine, the family of five moved to England where the father was appointed a lecturer at a Teachers’ training college. Ning continued her primary education at a primary school with local English children. 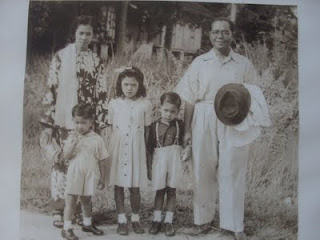 Leaving for England - for a better future


Three years later the young lecturer left England and became a lecturer at a university in Singapore.

Everything was seen to go well with the family who, by then, had a second daughter.

But it was not all sunshine and rainbows.

At the age of 39, barely one year after taking up his new post, and a few months before celebrating the Merdeka of Tanah Melayu in 1957, the lecturer passed away.

So at 34, the lady, Ning’s loving mother became a single mother and was left alone to raise the four young kids. The loss of her father affected Ning’s progress in education. She had to work soon after finishing school. And the mother chose to remain faithful to the memory of her deceased husband, remaining a single mother all her life. Her first real reward was when her adored Ning was married and, a year later, gave birth to three children, who in turn had ten children who were,naturally, the old lady’s great-grandchildren – a new generation.

So life went on for good many years. The once sweet sixteen was now 88, a great-grand-mother. In April this year she fell ill, but life went on for Ning who has now taken over the role of a grand lady – or should I say the ‘first lady’!

But that was not all. Tuesday 30th was not just any Hari Raya. It was also Ning’s 70th birthday. So, for all intents and purposes, that day ought to be a befitting day of the month to celebrate – (not to mention Pakcik’s own birthday which would fall three days later – just into September.)

As planned, the Hari Raya started all too well with the birthday and delayed wedding anniversaries cakes and all. And that being a Hari Raya, soon after ‘sembahyang Raya’, relatives and friends began to call in – the promise of a wonderful and joyous day.
_____________________________

While things were warming up and the family gathered to take group photographs, Ning received a phone call from her sister near Tanjong Malim. Their bed-ridden mother had just passed away. Was this not a divine planning that the faithful wife, the grand old lady chose to breathe her last at the age of 88, on a Hari Raya, on the very exact day, 70 years earlier she gave birth to her first child, Ning? Just imagine how Ning would feel, celebrating her birthday and the Hari Raya to be followed with the death of a very loved one.

So, Pakcik has lost two loving mothers. Fifty years ago my mother passed away while doing her pilgrimage in Mecca. I do not, as a result, have her grave to visit. Then this loving lady, who had been my mother, left us on that very auspicious day of 30th August.

On hearing the sad news, Pakcik made a snap decision to stop our part in the day’s celebration. The next seven hours of Hari Raya saw me driving on a relatively quiet route. We reached the burial ground when the last group was leaving the freshly made grave covered with flowers. There we squatted with tears running down our faces, reciting Al Quran, marking the end of our Hari Raya. We had to stop as the sun had gone down behind range of hills. 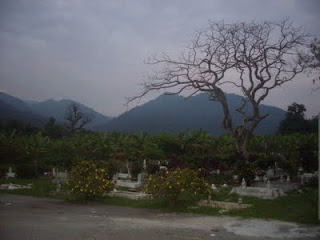 We planned and planned, and we often forget who the Ultimate Planner is. HE reminds us over and over again in the Quran of HIS overall power ABOVE EVERYTHING. 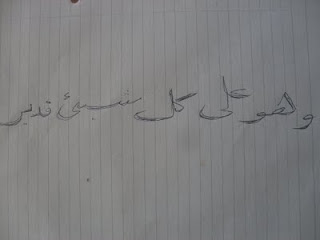 Thanks for sharing this, the story of life itself. Life is like that. We came and we leave when the time come. I am glad that she had a colorful life. May she rest in peace. Amen.

Certainly Allah knows better. I was planning to go toTrengganu, but due to change in plans, we came back thrpugh Cameron Highlands and stayed one night. So today is Pakcik's birthday and mine is tomorrow.
May Allah bless us both.

Pakcik,
Tuhan Maha Kaya. Condolences to you and family. Al-Fatihah...

Thank you. From time to time I do bloghopping to refresh myself with possible new looks at things. I hope you will bloghop here again and say your piece.

We are all great planners. That much we can claim, nothing beyond. As we do not possess the NINE opportinities, we try to do things right the first time. Thanks.

I think every of us has a colourful life, one way or another - just a question of right colours for the occasions. I thank you for your support with ideas and all.

I know you are one yourself. I hope things are all well. We keep on scoring 'minus one' like it or not. But life must go on.

Thank you for everything, Aminah.

It has been very tiring for us these few days. How nice it is to be enjoying the cool air up there. in Our earlier years, long long ago, we visited CH every August holidays as a ritual.

We hope to see you around.

Thank you. I wonder if you got my response. If you have not, something has gone wrong with my outgoing mails.

AK,Takziah from Hasmah and I especially to your Ning The First Lady of your family and AL-Fatihah to the Grand Lady May ALLAH Shower her with Blessings.ZUL.

My Tok Nyang (great grandma) passed away during Raya day too.

Wishing you also a belated Birthday wish to be blessed always with prosperity and good health!

Incidentally Sept 03 is Ma'am Ninot's birthday which is also my eldest d'ter Adura's birthday! And Aug 31st was Nabil's and Aug 21 was Norman's (my two cucus) And not forgetting Aug 01 earlier of yours truly!

Suka dan duka seem to go together simultaneously at times. Such is life and we have to be prepared for such eventuality. Thank you.

Coincidences after coincidences. They are truly parts of HIS plan but we, with limited knowledge, fail to see the overall picture. You have a fair share of notable events in August and September as well. Thank you, dear Hank, for the kind words.

And your anniversary is around the same time as well. Congratulations. Thank you for visiing to say takziah to us.

Takzizh. Thank you for the story and the picture. Sadly as you said 'Hujan ditengah Hari' atau as I left a title for a photobook to a good friend who lost his wife recently " Hujan Panas Permainan Hari, Senang Susah Permainan Hidup" You have left a nostalgic record of the departure of you mum in law and it will be remembered by the children.I will pass the sad story to friends at our next meeting and only last month Che Gu Baharudin mentioned yr mum in law. Salam to you and family.

When I first read your post, I thought the story was about Makcik as I remembered those days I'd read a book about 'Ning' given by you. Deepest condolence I wish to Pakcik and family.
I'm sorry for not visiting you on Hari Raya day itself- as I've never done so, right? [what a shame] It is just as you said,'We planned and planned, and we often forget who the Ultimate Planner is'. I was planning to visit your house on the second day of Hari Raya with Aishah but she mentioned you were away until Friday. Then on Friday itself, I had to go to Kelantan with my family. Frustrated, I really want to meet you. I want to share so many things regarding my journey as a student here but those words won't come out when I am in front of you. Pakcik, please stay healthy.

p/S: Believe it or not reading your blog helps me improve my English
>IDORA<

Every day I live is a hari raya to me, one more day of my life from HIM. So drop in any time to say helo to your old Pakcik who will not get any younger waiting to see his 'old' Idora!

See you whenever you are back with or without Aisyah. She can make her way to Almanar on foot, any time.

PakCik,
I also recalled on a Hari Raya morning paying my respects to a very dear close relative before the Solat Aidulfitri. Allah Almighty is the final arbiter of our life and it does not come a second sooner or later. May Allah Bless her soul, Alfatihah.

Once we accept the reality of life, how fragile it is and how powerless we all are, we can begin to live with ease of mind, doing what we should be doing.

Regards from us to you and family.